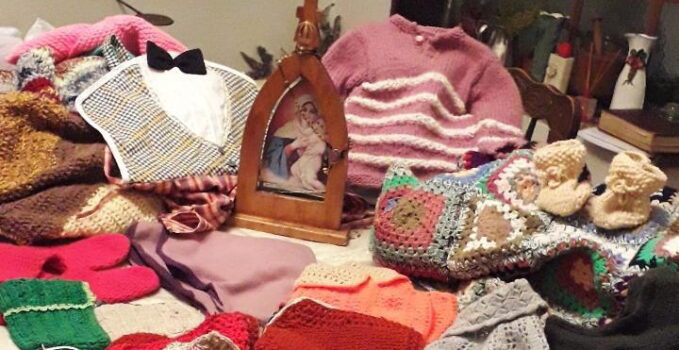 Posted On 2020-06-22 In Campaign, Covenant Solidarity in Times of Coronavirus

Even during times of pandemic, the solidarity activity that the more than one hundred missionaries of the Schoenstatt Apostolic Movement carry out in Rio Tercero does not stop. The group, mostly made up of older women, is working these days on making warm clothing for adults and children. Furthermore, some weeks ago they gave to the Municipality coats and caps that will be used by the health personnel. —

“We are currently making quilts for cribs, baby bags, coats and booties for grandparents in day care homes,” said enthusiastically Dominga Sandrone, coordinator of the group. “Pochola“, as everyone knows her, is one of the most active missionaries, even though she is 92 years old.

“There is a great need, the people are asking for warm clothing not only for children, but for all ages. And we try to meet all the demands,” she said.

Pochola trusts that the movement receives donations, “people are very generous,” she said, then recalled that some people also make contributions of money with which they usually buy materials to make clothes and so they continue to help those who need it the most.

Soybeans with recipes, so people can prepare food

The movement’s actions are not only aimed at making clothes: “We also distribute soy, which is donated to us, and recipes so that people can take advantage of it and make food,” said Pochola.

“We are very excited about the help we receive, and there are also women who are not missionaries who collaborate by weaving or contributing with supplies so that we can continue working,” she acknowledged.

The Schoenstatt Apostolic Movement has been developing its activity in the city of Rio Tercero for 31 years. Besides the work of solidarity, they take care of the four wayside shrines built to the Virgin of Schoenstatt, installed in barrios Sur, Intendente Ferrero, Castagnino and in the Paseo del Milagro. “When this isolation passes, we are going to bless two more Wayside Shrines, one in Las Gamas, in a country house for people who have recovered from addiction problems, and another one in Tancacha,” said Pochola, “I always claim that the Movement is a ‘school of Mary,'” said Pochola in reference to the lessons that are given to the missionaries monthly, bringing them a message “for life.

Pochola is proud of the work carried out by the group she coordinates: “We are one of the few who have continued working during the pandemic, even from the city of Córdoba they have asked us to send photos and videos of our activity to show other movements,” she said.

Thank you, dear Pochola, for this work of solidarity and for making Schoenstatters known in Rio Tercero as those who offer support to the most needy.

With the permission of Alejandro Tissera, Editorial Director TRIBUNA

Pochola Sandrone… Does the name ring a bell?

“Dominga Sandrone is called Pochola in Rio Tercero and even today, at 88 years old, she is recognized as having a formidable spirit and the gift of organization. On Friday, November 3, 1995, she was to take the picture of the Virgin of Schoenstatt to the Military Factory at 9:00 a.m. with her husband Ricardo.

But at 8:20 a.m. she had the happy idea of calling to reconfirm the time. “Just now she was looking for her telephone number. They asked me not to come at 9 but at 10 or 10.30,” answered a secretary, “because there is a meeting here and meetings are always delayed. Pochola answered that they would go at 10.

She could not comply and her and Ricardo saved their lives because at 9.08 the largest military factory in the country began to explode with the first of five explosions that destroyed part of the city of Córdoba – three neighborhoods were swept away – killing seven neighbors and injuring hundreds, all civilians?”

From an article in the newspaper La Nación, from Buenos Aires, Argentina, 2015