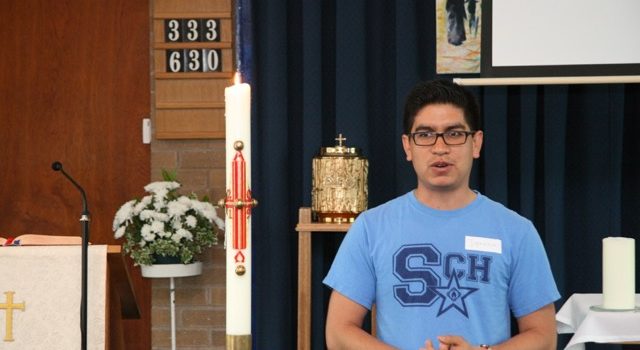 Many ways and places to travel with the Pilgrim Mother

The day began with testimonies. The young people who are volunteering at the shrine set the ball rolling with Ignacio talking about the Mexican Schoenstatt Pilgrim Mother Campaign, but also what they are doing here in the UK, followed by Jessica from Paraguay who is taking the Pilgrim Mother to London, where she will be studying.

Something she said caught our special attention: Beside the “usual” way of a picture of the Pilgrim Mother regularly visiting a number a families, there are other modalities, all born in a dialogue between voices of times and souls and the missionary’s personal call.  So there we have the Pilgrim Mother for youth, for children, for schools, for prisons, for serenity and calmness in the spirit of Sister Emily visiting people with anxiety, a small one for babies and young children at risk of death, a very small one entrusted to children, a white one, called Pilgrim Mother of Sweet Hope, for couples longing for a baby, a Pilgrim Mother for the sick, one in relief for the visually-impaired ones, the foundational Pilgrim Mother setting out to places where there is no organized Schoenstatt Movement (like Iraq, Lebanon, Syria, Venezuela, Russia, Uganda) and many more.

Brian Stocks spoke movingly of the “work” done by the Pilgrim Mother in their home, where she brought back family members to a more vibrant faith. 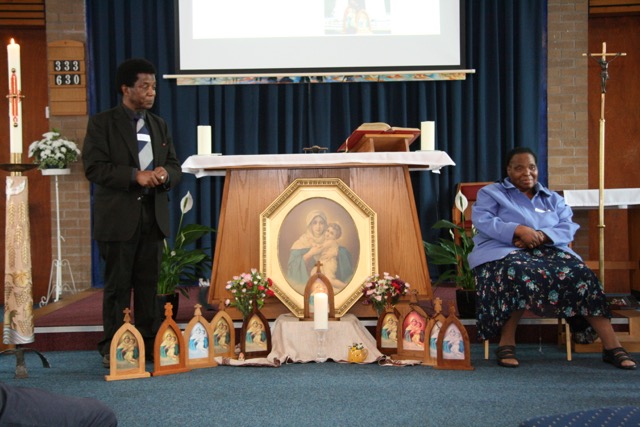 A Mass, an Illuminated Rosary, and expectant possibilities

Holy Mass was moved from the shrine to the hall to accommodate everyone, and this was followed by a joyful lunch. The parish ladies looked after us and added to the jovial atmosphere. After lunch, we had a general discussion on how we can spread the Pilgrim Mother apostolate. If only some of the suggestions get carried out, we will have taken a big step forward.

At the end, we prayed the “Rosary of Lights” (Illuminated Rosary), this time putting down the lights before we said the Rosary. This contributed to a more prayerful and peaceful atmosphere.

Three pilgrim pictures were sent out that day, and three people are waiting for the frames to arrive from Germany – six have been ordered!

For those who want to keep the Pilgrim Mother, there are small, plastic versions available from Scotland as a start for a home shrine. 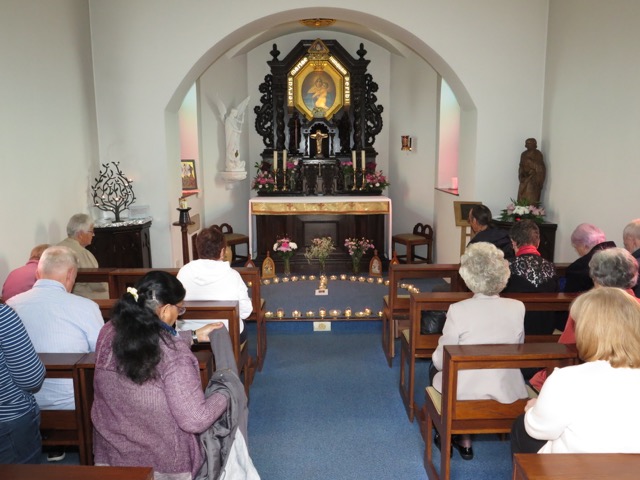