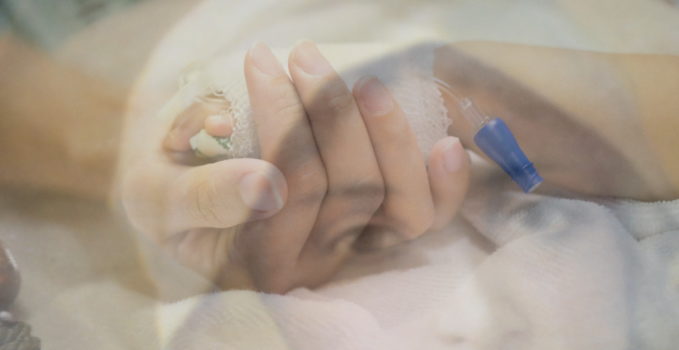 The Blessed Mother takes care of a mother and her at-risk baby, Sofía

Last March, my husband and I found out I was pregnant again; we already had a 2 year-old son. In April, to our great surprise, because in our families there was no precedent of multiple births, it was confirmed they were twins. —

In May, I was told I needed bed-rest due to complications, and since the girls were supposed to be born at the end of October with still a long way to go, I had to rest as much as possible. At that moment, I began to draw closer to God and the Blessed Mother of Sweet Waiting. A friend brought me the Blessed Mother of Serenity. I entrusted my daughters and my body to her, so that everything would be well and all would go according to God’s plans. I always promised to accept His will.

Finally, on August 2nd, I had to be admitted to the hospital for treatment to prevent a premature birth as much as possible. Until then, the girls were growing properly, and all their assessments were perfect, but on the morning of August 26th, my placenta abrupted and the twins were taken, otherwise, all three of us would have been in danger.

An angel accompanied her sister

Sofía María and Victoria María were born at 28 weeks (6 months) with a weight of 1,100 kg, respectively. The prognosis was reserved since it was a premature birth. Now they had to be stabilized, they were placed in an incubator, they were medicated so their lungs would develop, and were fed intravenously, everything needed to make a life grow outside the womb. From that moment, I prayed to God and the Blessed Mother to take care of them and that God’s will be done, that it be whatever was best for them.

The day after the birth, they were baptized in the neo-natal intensive care unit, and on the fifth day, Victoria had a massive brain hemorrhage and returned to heaven with God. With a broken heart, I understood that she was a little angel that came to this world to accompany her sister, but it was God’s will that she did not remain here. 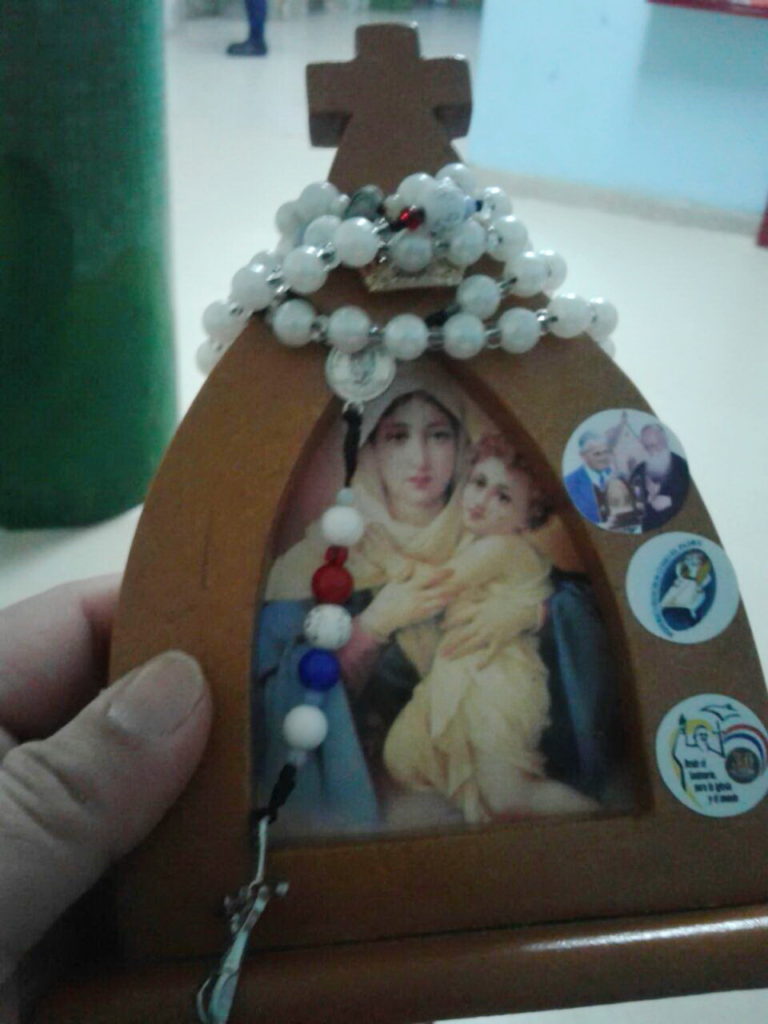 The following day, I received a message from a person I did not know, Sady Fleitas, from the Rosary Campaign for At-risk Children, and she told that she was bringing the Pilgrim Mother, the Little Pilgrim Mother, and that many people were praying for Sofia. I was surprised that this person knew about my situation, and she wrote to me and sent the words I needed at that moment from the Blessed Mother.

In a few hours, Lourdes Almirón, who was sent by Sady, brought me the Little Pilgrim Mother; she lovingly told me her story. I felt the Blessed Mother had come to accompany my baby and me during these hard times.

We placed the Little Pilgrim Mother on the furniture beside Sofi’s incubator, and the whole medical team and we welcomed her, so she could heal all the babies in the Neo-natal Intensive Care Unit.

The road was long. Sofía had surgery, several ups and downs in weight, and she was in and out of the respirator several times. But the day that I felt God and the Blessed Mother at my side was when we found out that she had cystic fibrosis.

No one is prepared for a premature baby, but what is impossible to prepare for is to receive a diagnosis of such a difficult disease as cystic fibrosis. The world came tumbling down and Sofía was in very bad shape, very bad.

The following day was the most difficult of my life. I prayed to God that he would take her so that she would not suffer. I cried; my soul felt torn, but I could not see her like that, especially knowing about her illness. No one could give us hope that we would leave from here. 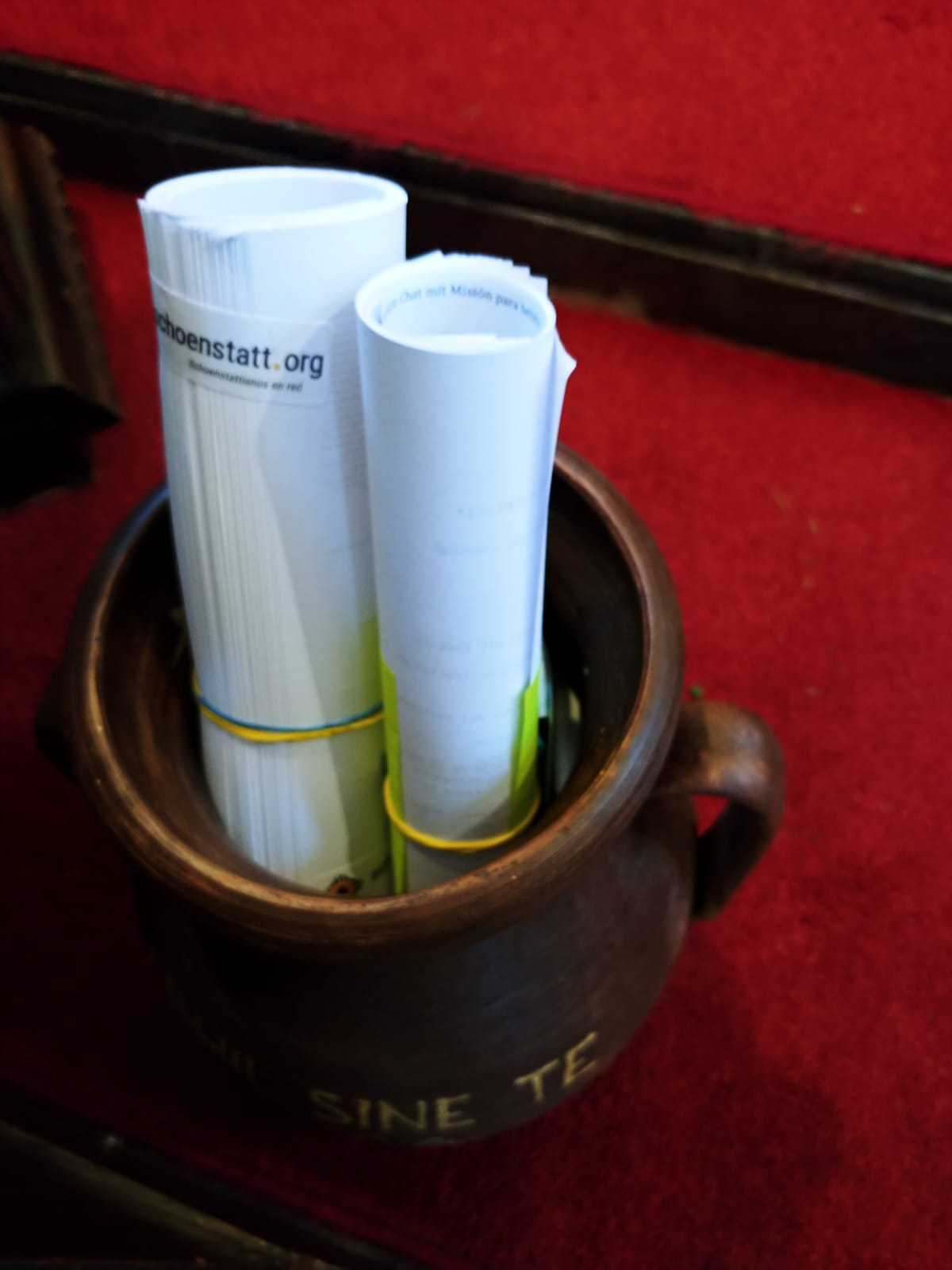 But God and the Blessed Mother showed us many times that we don’t always understand his plans or his will. Sofí began to improve. Every time we went to see her, her monitors showed improved readings, she had a strong heart.

In a week, we received some tests that confirmed her intestine was fine, which removed another illness, and she could have surgery again. The days passed and her condition improved. Last night she decided to take herself off the respirator, and she began breathing very well!

I knew the road was still very uncertain. Sofí had been in therapy for forty-five days, and she only weighed 1,310 kg. Because of her illness, gaining weight will be a challenge for her, but she showed us how strong she is, and her desire to live.

I was sure the Blessed Mother was giving me that strength a mother needs, as she lived in an exemplary way, and God was showing us the way little by little.

I trust your might, your kindness, Mother dear;
I do believe that you are always near.
Schoenstatt’s great Queen, O Mother mild,
I blindly trust in you and in your Child. Amen. (Heavenwards, p.170) 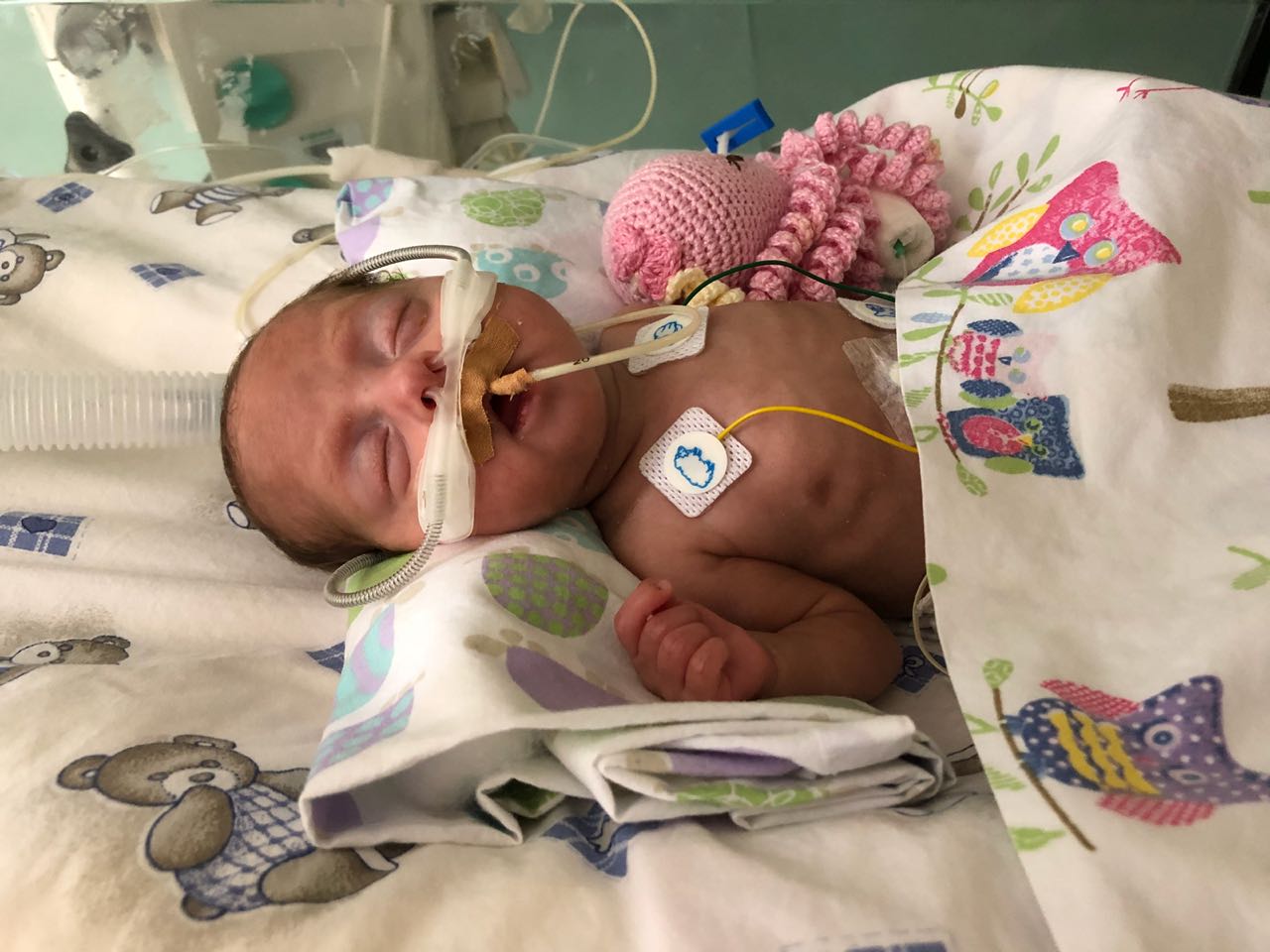 My Sofíta is now a little angel having returned to the house of God the Father and Mary. She is with her little sister Vicky. Although I feel my heart forever is broken, I am happy that she is in that place the we all desire so much! I pray to God that someday I will be with them again enjoying much love and peace. I am grateful from the bottom of my heart and soul for all the help and prayers for us during this process. Please extend this message to the group! I hope I can meet them soon.