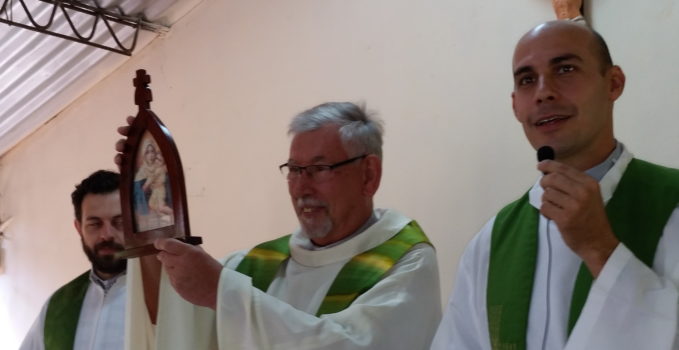 “For whoever is not against us is for us.”

“What is my Blessed Mother doing in your house?” This was a Schoenstatter’s surprised and at the same time happy, although also a little indignant, exclamation on his first visit to his girlfriend’s parents’ home, who were not Schoenstatters. This also called to mind, seeing Fr. Egon Zilleken’s face during his pleasant exchange with Liz and Juan Álvarez from Buenos Aires, who were recently appointed as Schoenstatt Rosary Campaign National Advisers of Argentina, during their visit to Schoenstatt in mid-September, as part of their European tour.

“What is my Blessed Mother doing in your home?”

It happened in the midst of Fr. Kentenich’s exile and only ten years after the end of World War II, in a small city in rural Northern Germany. That boyfriend, a very committed Schoenstatter, and at that time, he was not even a boyfriend in the official sense of the word, but who had only one but a great concern about his girlfriend: How could he talk to her about Schoenstatt, a Movement that was very much in question at that time, but that was his life’s mission as well as his greatest desire to join the Family Work someday? Upon visiting his future in-laws for the first time, he still lacked the courage to talk about this subject…while for her, that visit to the humble home of her parents, who were refugees from East Germany and only possessed what they could carry, also caused a certain level of nervousness.

When they opened the door of their home, the first thing that the boyfriend saw was a large picture of the Mother Thrice Admirable of Schoenstatt – this was the cause of that shout. The family had this picture in their home, and it was one of the belongings that they carried in their long and painful escape from the East when the Russians expelled them from their home. A year later, that boyfriend and his girlfriend were married; they were the parents of the author of this article.

Teacher, we saw someone driving out demons in your name, and we tried to prevent him, because he does not follow us.
Jesus replied: “Do not prevent him. There is no one who performs a mighty deed in my name who can at the same time speak ill of me.
For whoever is not against us is for us.” 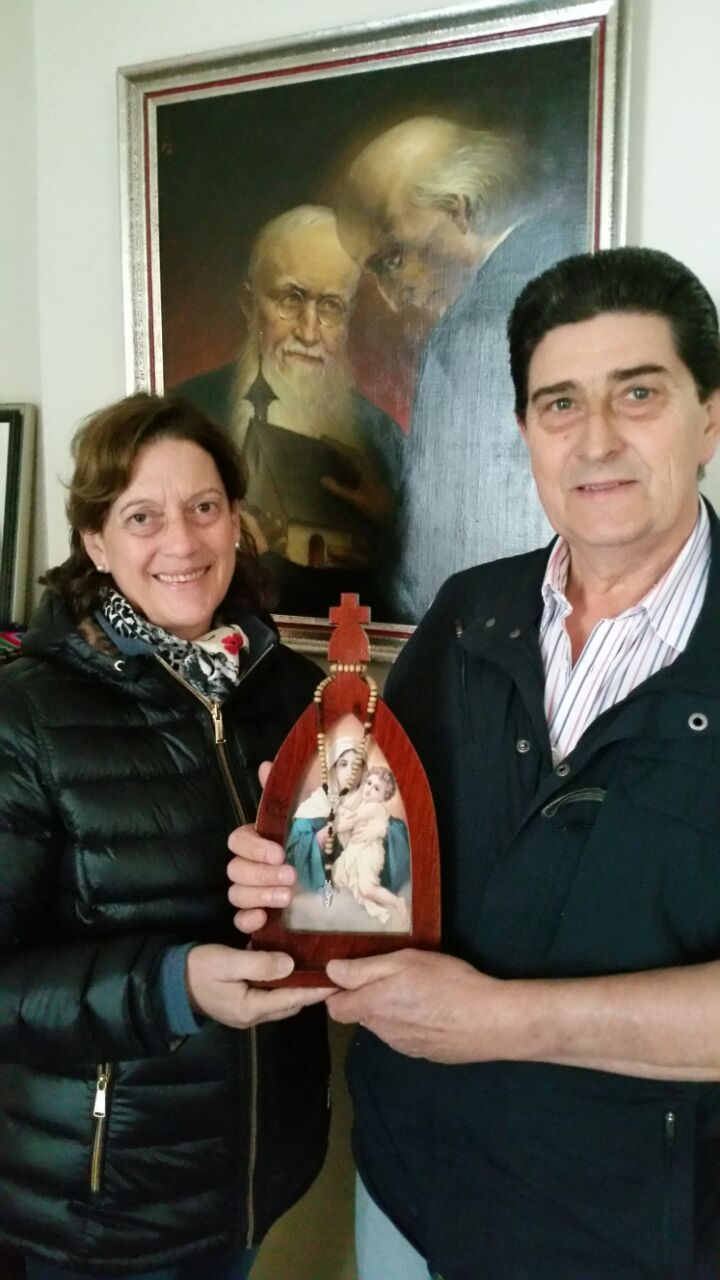 With great emotion, Liz and Juan Álvarez, visited Fr. Kentenich’s room and that small parlor in House Marienau where he received his guests for meals and conversations; they were guided by the Rector of the House, Fr. Egon Zilleken. “We have heard so many times what had happened here,” Liz commented, and although I was here in Schoenstatt in 2005, I never saw this place; “many times they told us about Joao Pozzobon’s presentation of the Pilgrim Mother to Fr. Kentenich, in 1968, and now we are here.” Moreover: They could not believe that Fr. Egon Zillekens – who although he was not present at the moment when Fr. Kentenich spoke to those young priests about the new ministry carried out by Mr. Pozzobon – knew all the details about that conversation since he knew that priest who asked Fr. Kentenich about methods for the new ministry, and how he was scandalized at Fr. Kentenich’s response when he did not refer to a famous theologian of that time, but instead to a simple Brazilian with his Pilgrim Mother…And how he asked again, thinking that Fr. Kentenich had not completely understood, and how Fr. Kentenich again spoke about Pozzobon and the Campaign as the model of a new ministry for the Church of the future…and how this priest still did not understand and was disillusioned by his founder’s response.

Life can emerge and there can be grace outside the institutional

Liz and Juan enthusiastically commented to Fr. Egon about their new task, how they want to strengthen the dioceses where the Campaign is strong and to accompany those that are a little weak.

After sharing a great concern – that of bringing order to everything that is not in order: seeking to register all the Pilgrim Mothers, to stop the Argentinean carpenters from making Pilgrim Mothers without their permission, and stopping Pilgrim Mothers that are not registered… Fr. Egon’s look of incredulity as he heard these comments, was priceless.

First there is always life, and then the norms, he told them, we learned this from our Lord: “Do not prevent him. There is no one who performs a mighty deed in my name who can at the same time speak ill of me. For whoever is not against us is for us.”

And he said to them – from the depths of the vocation to freedom that is so characteristic of the Federation – life can emerge… there can be grace also outside of the institutional, of that which is recorded, of ordered. One cannot rule out or prevent the Blessed Mother from reaching many hearts, working miracles, creating new forms, or being a source of new life through a Pilgrim Mother that is unregistered, lost, or ‘illegal…’”

That is how Fr. Kentenich operated from the beginning… observing life, observing with interest, with amazement, with that paternal authority that facilitates life to emerge, and later, much later, channeling it…but a little bit, only a little bit. He was always attentive to what he observed in the Church so many times: The spirit creates forms, but then the forms eat the spirit.

Hours later, Liz Álvarez asked me: “Maria, where did the Original Shrine Pilgrim Mother come from? “From Argentina,” I commented. “… And it was not registered. But do not even think that Fr. Egon will return it for that reason, or even more, because he was an eyewitness to her work in all the places he visited with her.”

Like that picture of that MTA in my grandparents’ home, that was not a Home Shrine, and it was not directly attached with Schoenstatt, but that it was so loved and so important for them that they took it in those two suitcases that they could carry…

Teacher, we saw someone driving out demons in your name, and we tried to prevent him, because he does not follow us.
Jesus replied: “Do not prevent him. There is no one who performs a mighty deed in my name who can at the same time speak ill of me.
For whoever is not against us is for us.” 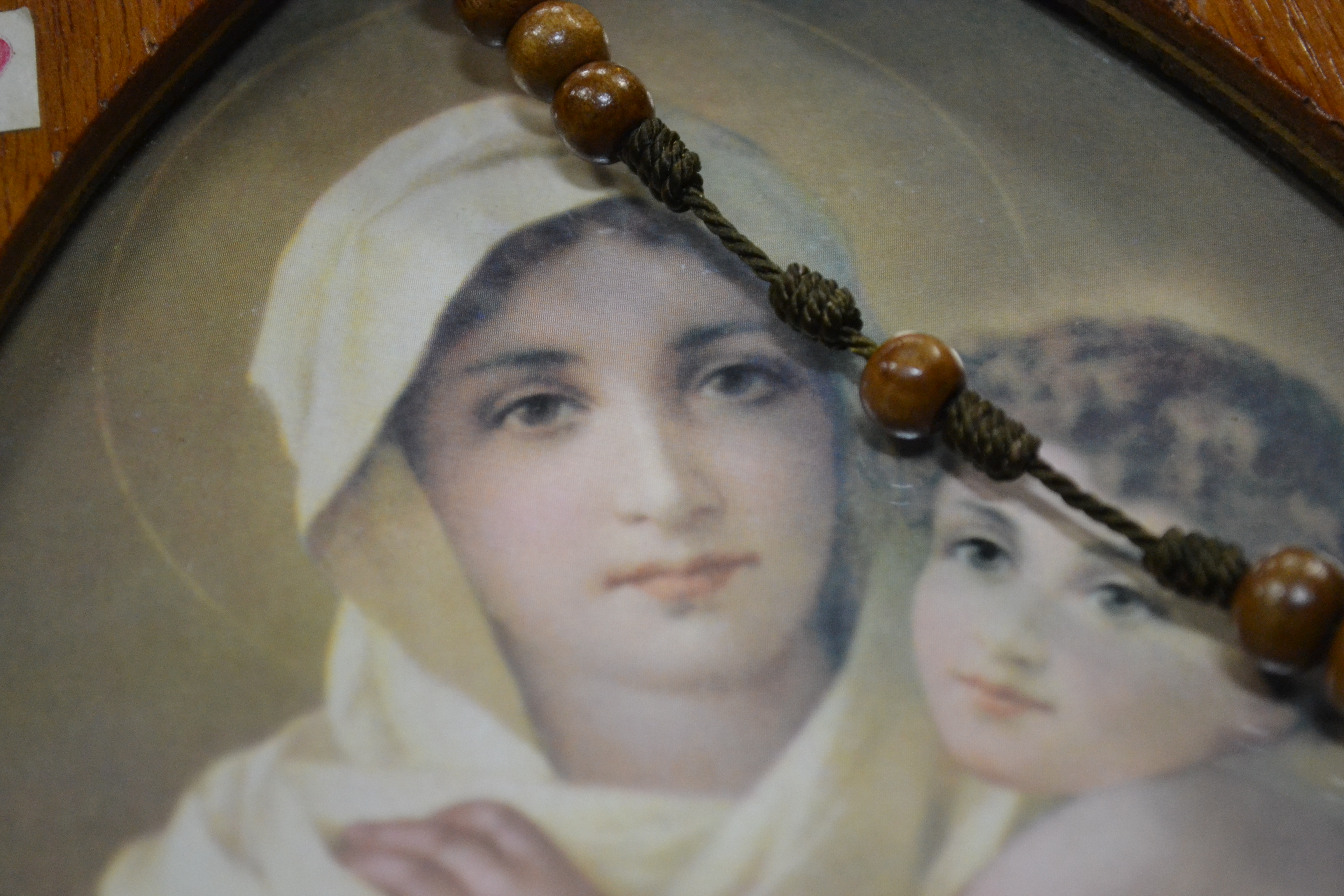