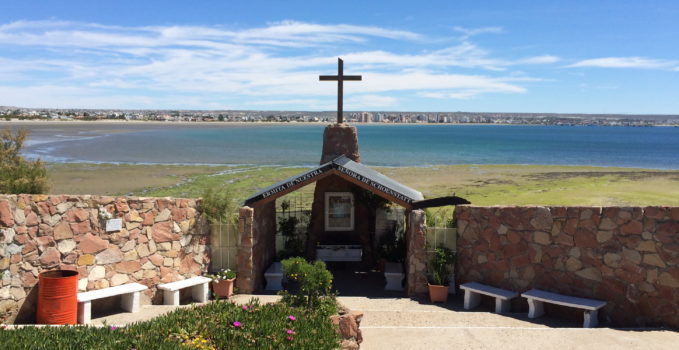 The popular creativity of missionaries from different nations where these shrines are found displays enormous diversity. However there is something that they all have in common, something that unites them. It is the immense love borne of a Mother’s restless heart that wants to be close to her children because she knows they need her.

A Mother on her way that awakens the desire of generous men and women to give her shelter in their hearts, to ally themselves with her and to build a Wayside Shrine for her in their land. They want her to establish herself in their areas, to accept the prayers and sacrifices they offer her so that they will shower her graces and blessings from there for the wellbeing of their brothers/sisters. Thus giving life to the “Nothing without You, Mother, nothing without us”, untiring, in the footsteps of Joao Pozzobon, they get to work.

The beautiful stories behind the construction of each wayside shrine, speaks of the unconditional giving of self of so many Campaign missionaries who do not become discouraged by the many inconveniences and obstacles that always occur. It is not easy to obtain the land, to get endorsement from the authorities or to actually build the Wayside Shrine. But nothing stops them. Thousands of rosaries and contributions of sacrifices to the capital of grace sustain the initiative and open the roads until arriving at the long-awaited day when the Mother Thrice Admirable takes possession of this little place in the world, and she begins to shower her graces and blessings from there.

From this moment, Wayside Shrines are transformed into original extensions of the Shrine, places of encounter, where bonds are woven, and the (Blessed) Mother unites with her children giving them an experience of belonging, creating a family atmosphere.

There the Campaign missionaries gather in a special way on the 18th of every month to pray the rosary, consecrate themselves to the Blessed Mother, pray 1,000 Hail Marys, seal their Covenants of Love, and renew their giving of self to resume their mission with new strength. 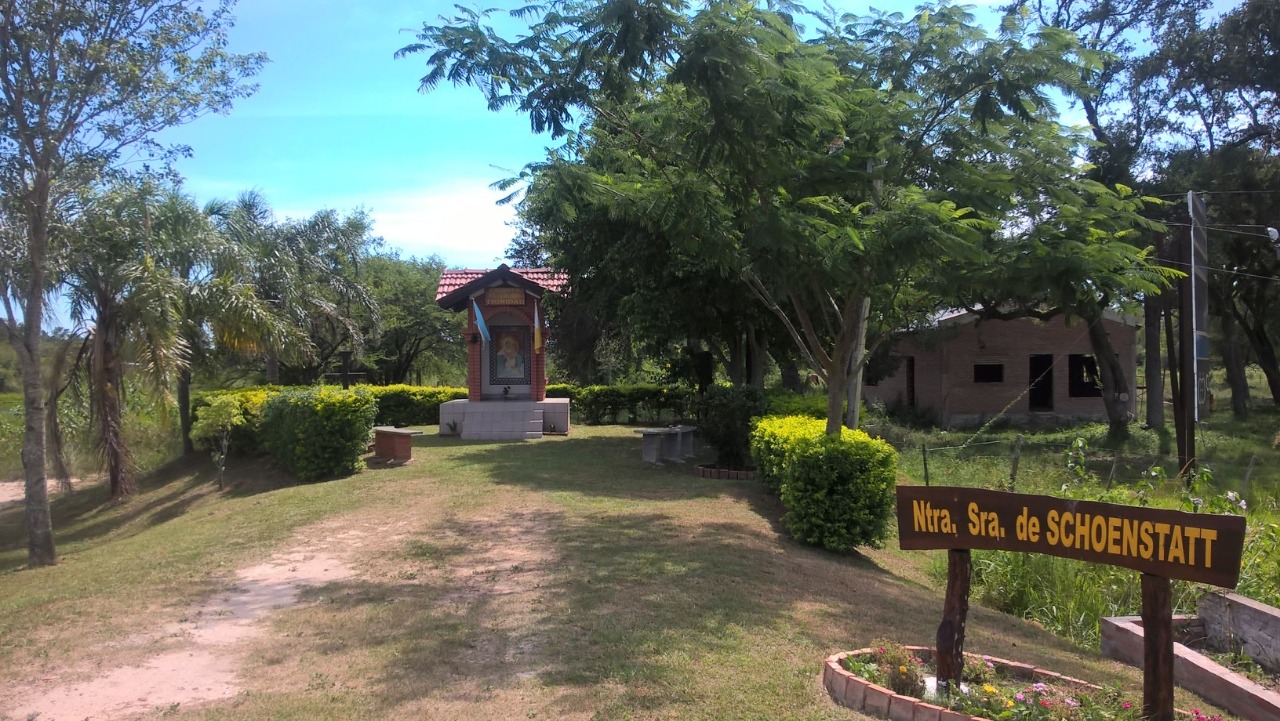 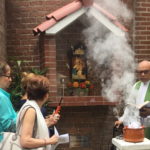 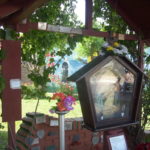 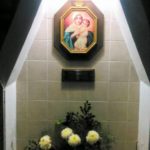 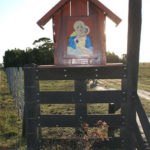 In homes and on streets

Through the Campaign, the Pilgrim Mother, traveling the world, wants to come and be with families, teaching them to pray and live the mysteries of the rosary in covenant with her, and to establish herself in hundreds of thousands of home shrines. However that is not enough for her; she also wants to make herself present in public life: sharing in the lives of people, remaining on streets and roads in those little pieces of heaven where she wants to be close to all her children, getting close to the neediest ones, sharing in their sorrows and joys, and inviting everyone to become her allies that will help in her mission of transforming the world.

This is how Joao Pozzobon understood it. In 1979, he traveled to Schoenstatt, and upon his return to Brazil, he was inspired to build Wayside Shrines of Our Lady of Schoenstatt like the ones he saw in Germany.  Therefore a new current of life emerged in the Campaign: in only five years he placed forty wayside shrines “on the crossroads, in strategic points, almost always in remote places, far from the parishes, where the priest did not go.” Joao said –

“Every wayside shrine erected is like an antenna that from on high attracts, in this gigantic Campaign, the strength and the gift of the Divine Holy Spirit.”

They are very simple, a bronze image of the Mother and Queen supported on a wooden post that is sunk in the ground. They are blessed in the Shrine, and then there is a second blessing with the people in the site where they are placed. Joao highly recommended that they gather close to the Wayside Shrine on the 18th of each month to pray the rosary as a symbol of unity with the Shrine, enabling the current of graces that flow from the Shrine to reach the most remote places.

Fr. Esteban Uriburu also understood the importance and the providential role of these places of Marian radiation in our time.  “In this era, when spiritual erosion is erasing every sign or vestige of the Divine in daily life, the wayside shrines emerge that are small oasis around which humble people feel the presence of their Mother more concretely.”

From this website, we want to gather photos and testimonies of life that bubbles up in so many places of where the Campaign spreads and where Wayside Shrines are emerging as the Blessed Mother passes.

In Joao’s footsteps, united to all the Campaign missionaries and families, we want to place ourselves at the service of this wonderful current of life that the Blessed Mother has given us in Schoenstatt, and which the Father and Founder valued so much. In October 1946, he did not hesitate to abandon the Annual Gathering of the Movement to go to bless a small wayside shrine of the Blessed Mother in Switzerland and to crown the Mother Thrice Admirable as Queen of the world, in a place that appeared to be of little significance. 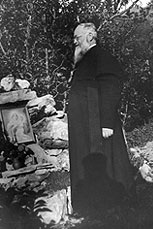 That day he said–

Today we are around a small Wayside Shrine …in time, from something small something big will emerge. Schoenstatt was also small at one time. And from the small something large emerged, and it wants to become larger, projecting itself more and more toward the world in a time when the world is collapsing…I am heartily grateful to all those who have selflessly collaborated faithfully and simply to honor the Most Holy Virgin. Now she wants to be crowned Queen of the Universe.

As Queen of Schoenstatt, she also wants to be Queen of the world: she wants to travel through the towns, conquering them, and we want and should help her in that mission.”

Yes!  We want to help our Mother and Queen in that mission. To help her travel the towns and to establish herself among us, to renew the world. We want to make the Father and Founder’s desires our own.

We want to unite with the missionaries and families of the Campaign to encourage this wonderful life current of Wayside Shrines that the Blessed Mother wants to sow in the world. 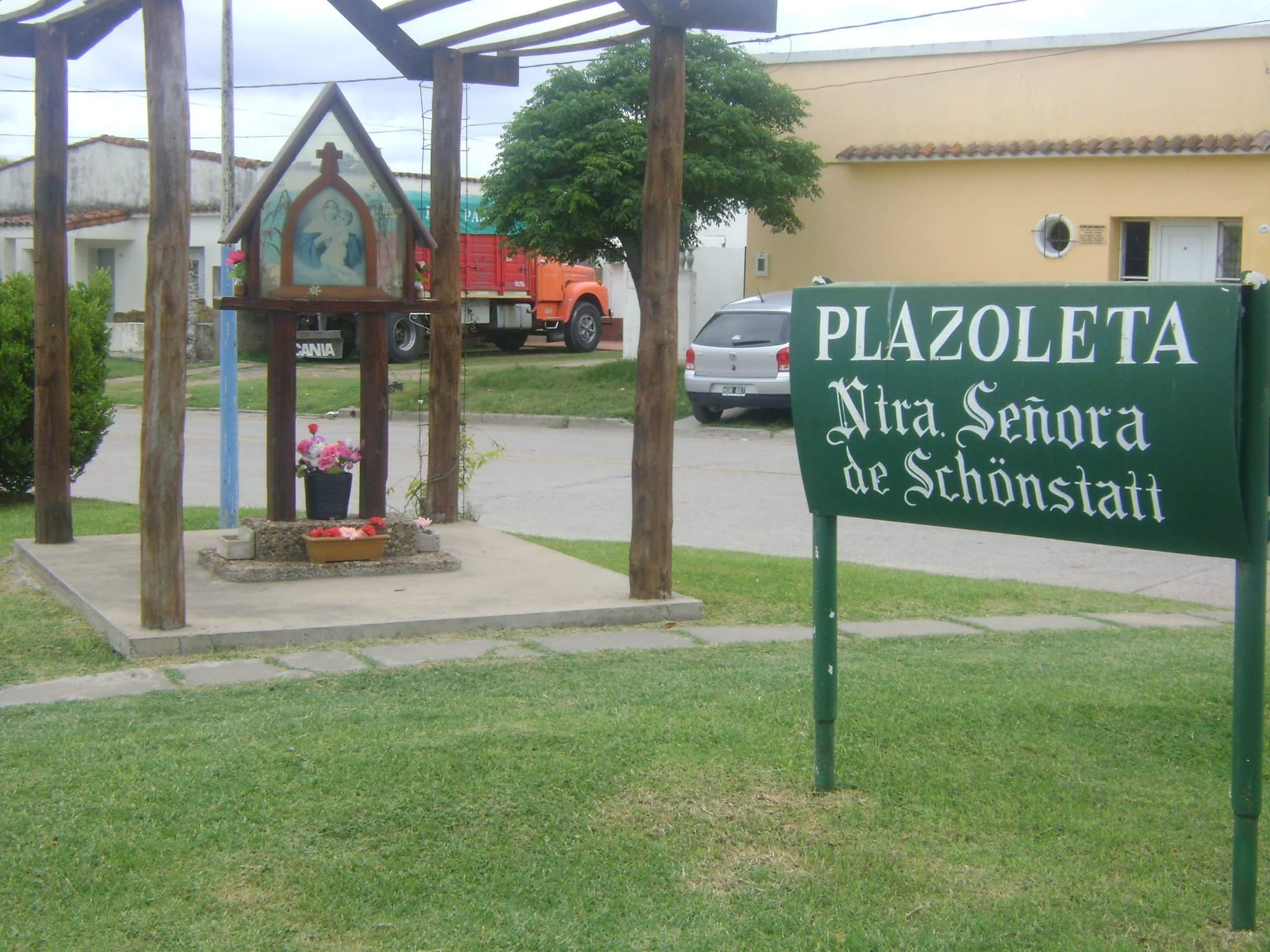 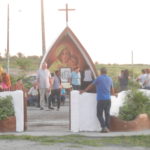 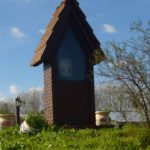 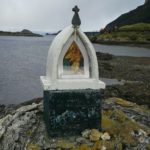 But…how can we do it?

We may ask ourselves: What would happen if a strong missionary current of prayer and sanctification is elevated to heaven from every Wayside Shrine, offered to the source of graces of the Shrine, to help the Blessed Mother to establish herself in thousands of new wayside shrines in all the corners of the earth?

What would happen if, through the self-giving of the missionaries and their capital of grace, every wayside shrine assumed this mission of transforming itself into a fruitful seed to enkindle the world with the fire of the Covenant of Love that sprouts from those tiny pieces of heaven where the Mother Thrice Admirable wants to manifest herself as Queen of the people, as Queen of the world?

The Blessed Mother knows the answer. And she invites us to give ourselves to her as instruments with the same words with which the Father and Founded closed his talk in the small wayside shrine of Wessen in Switzerland: “Our life for our Queen.” 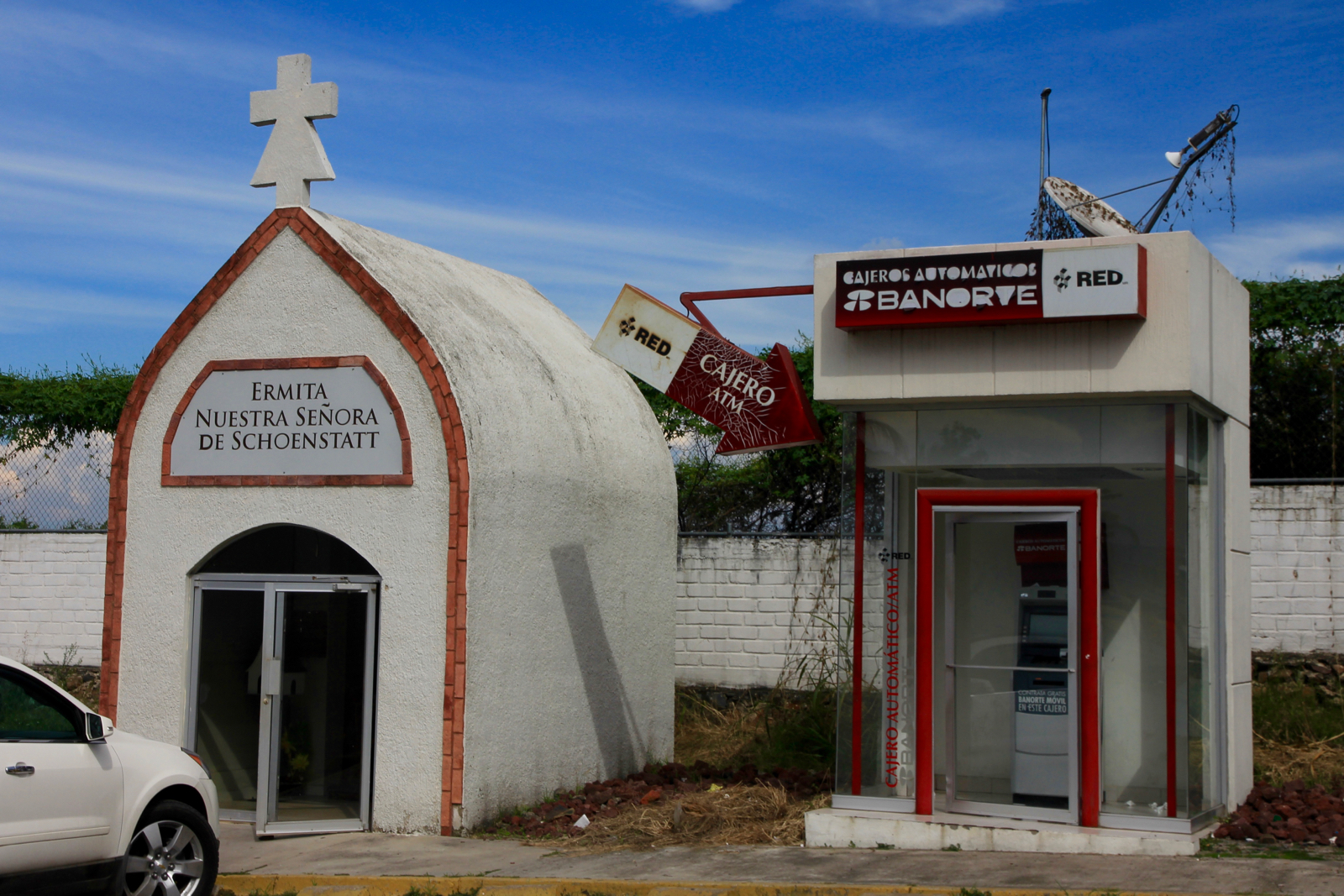 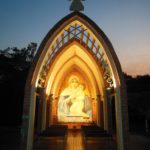 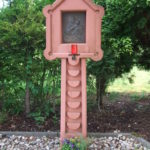 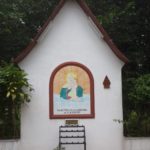 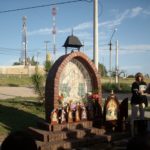 Photos that will be seeds for new Wayside Shrines…

We continue to enthusiastically invite everyone who follows us to send photos of their Wayside Shrines to schoenstatt.org.  The mission of these photos is to awaken the desire in others to build new Wayside Shrines in their places. They will be used to make a digital replica of the Pilgrim Mother that Joao carried on his shoulder traveling 140,000 kilometers with her.

This replica will be displayed in the Joao Pozzobon Hall in Belmonte, Rome that will be visited by pilgrims from allover the world. It will be an expression and testimony of the Mother Thrice Admirable’s living presence that has wanted to be established in so many corners of the world and on five continents. Thus, every country will be represented by their wayside shrines in this place in Rome, where pilgrims and missionaries from everywhere can make contact with the person of Joao Pozzobon, his life and his work.

It is so beautiful that all the Campaign missionaries from different places and countries can work together encouraging each other to send photos of their Wayside Shrines, which as of now, for practical reasons, we will gather on the schoenstatt.org website.

May no Wayside Shrine be left out of Pozzobon Hall in Belmonte and may all the photos of the world’s Campaign Wayside Shrines be present and form part of the replica of the Joao’s Original Pilgrim Mother. It would also be wonderful that besides photos and stories about their origin, if you would send news about the life currently emerging in every Wayside Shrine. News that others can read and which will generate new initiatives. Because fire spreads and “life enkindles life.” 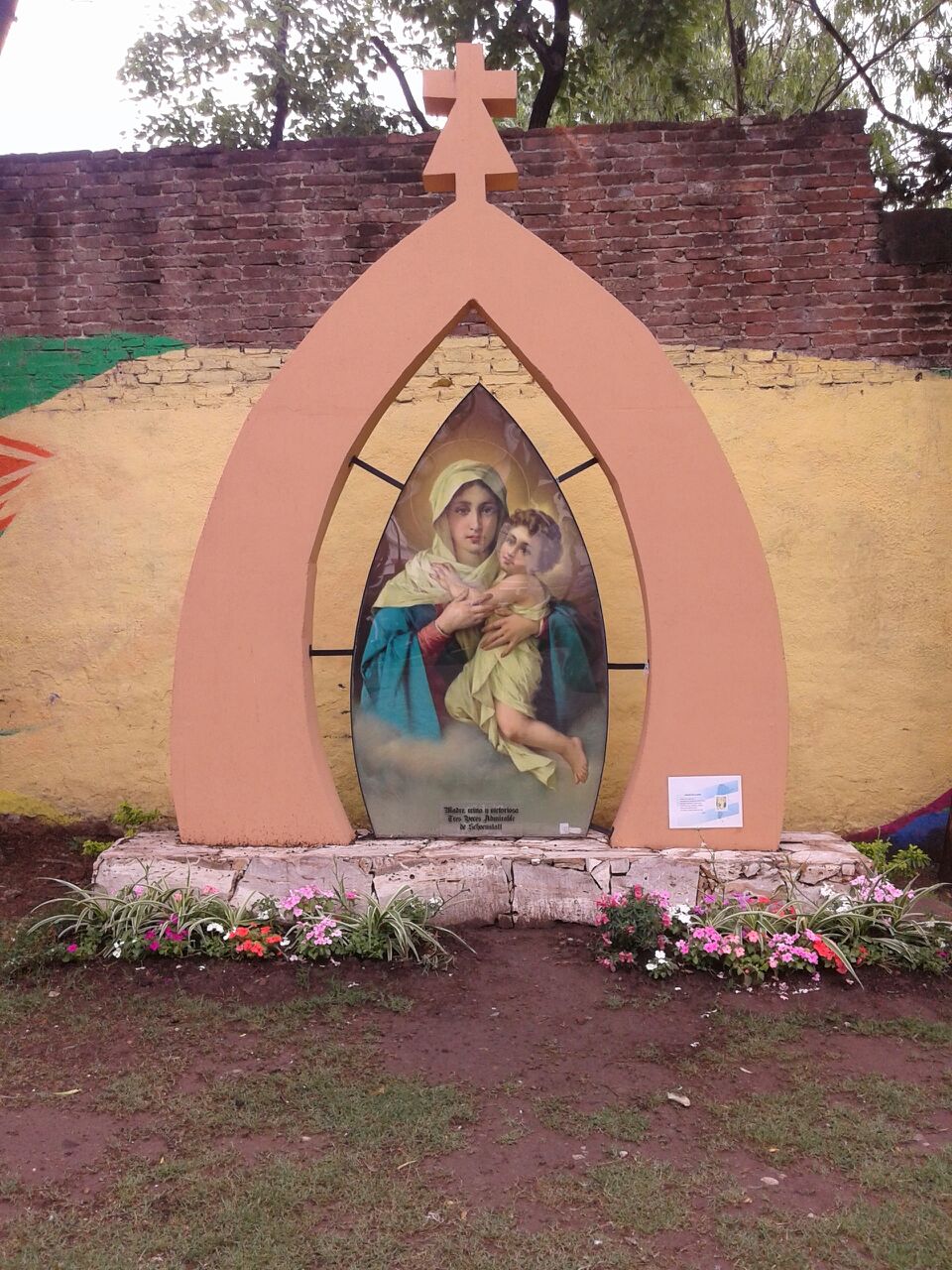 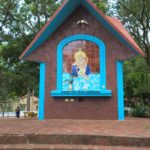 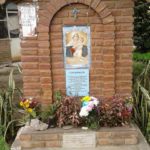 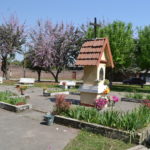 For the photos and the stories from real life

Upload the photos using this form:

Or send them via email at: [email protected]

Only send the photo of your wayside one time.

And we receive the thousands of real stories of life around their wayside shrines at: [email protected]

Album of all the wayside shrines sent as of now. 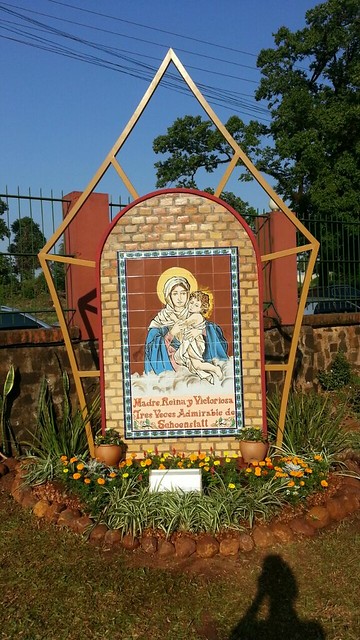