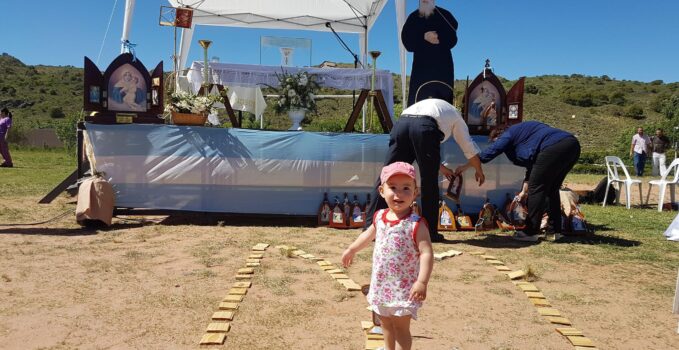 The traditional Marian Youth Walk, which takes place every year in the Diocese of San Luis, this year had a new version due to the pandemic: The Marian Youth Caravan, which took place on Sunday, November 15 at 5:00 p.m. What a beautiful time it was when we received the news and testimonies of this walk directly, when we were asked to spread the word! This generation is no longer here, but fortunately there is a note  at  AICA that we can share. —

The participants of the Caravan, mostly young people, gathered at the door of the Church of Nuestra Señora del Rosario del Trono and they departed in a caravan of cars to the grounds of the future Schoenstatt Shrine in the neighborhood of Cerros Colorados, of Juana Koslay. The image of the Santo Cristo de la Quebrada accompanied the entire tour. There was a stop at the San Luis Central Hospital, where Bishop Gabriel Barba, prayed for a few minutes for the sick and those affected by Covid-19.

After the moment of prayer, the caravan continued towards the grounds of the Blessed Mother. There, at 7:30 p.m., Mass was celebrated, presided over by the bishop, accompanied by priests, seminarians and collaborators.

In his homily, the prelate emphasized: “In today’s first reading I want to rescue a small phrase in which we celebrate the Youth Walk-Caravan. The Book of Proverbs says ‘Charm is deceitful and beauty is vain’.” In that sense, he considered: “Youth is a disease that is cured with the years. So from that, we are all cured unfortunately”. Therefore, he advised: “Enjoy yourself while you have that beautiful disease that is youth, but live with the light of the Gospel. Not all that glitters is gold. Not everything that seems beautiful is such”.

Then he said: “That is why it is so important to get to know Jesus, to follow Jesus, not to be afraid to carry the cross, to recognize ourselves as God recognizes us, to love us as God wants us”, and he added: “God does not want me tomorrow, he wants me today. God wants me to be a saint, but he already wants me even though I am a sinner, because that is why he gave his life”.

There is a value in being different

He then said that this value distinguishes us as unique and unrepeatable persons, “we from faith and called to communion to be one in Christ, illuminated by Christ from our differences in communion. This is the richness of the Church.”

“These young people received a talent that is not for themselves and not all responded equally. The first two made it produce and multiply, and there was a last one, the one who had received only one talent, and what did he do with his talent, he buried it because he was afraid”.

“Fear”, he reflected, “can paralyze the brave, can stop us from playing, but if we do not play, we shall never be men and women of God”. And he affirmed that the last young person, “did not understand God, and it is God who gives us the talents”.

“I ask myself, where do we stand, what do we do with the gifts that God has given us?, do we put them to use, do we overcome our fears,” and he affirmed: “Fear is overcome by trusting in providence, which is what all the great saints have done”.

World Day of the Poor

Before concluding his homily, the prelate said that this Gospel invites us to respond to the call “knowing that we are administrators. We will all be accountable to God,” he added, “only in one thing we will be judged at the final judgment: in love”.

“May we offer these great gifts that we have all received, to others and ultimately to God in order to become truly ourselves as God has dreamed of us in his infinite mercy”.

The bishop also referred to the World Day of the Poor, since in several parishes of the diocese there were gestures of solidarity, and he asked God that the poor always have a place in our hearts.

Later, the bishop thanked all those who collaborated in this XXII Marian Youth Caravan, the various parish groups, the seminarians, among others, and continued with the prayer of consecration to the Virgin. Before finishing, the prelate gave the final blessing. 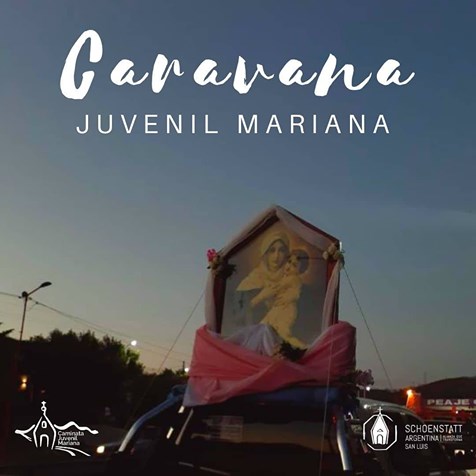