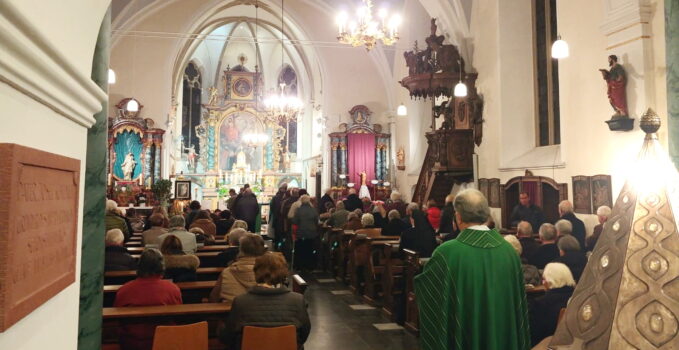 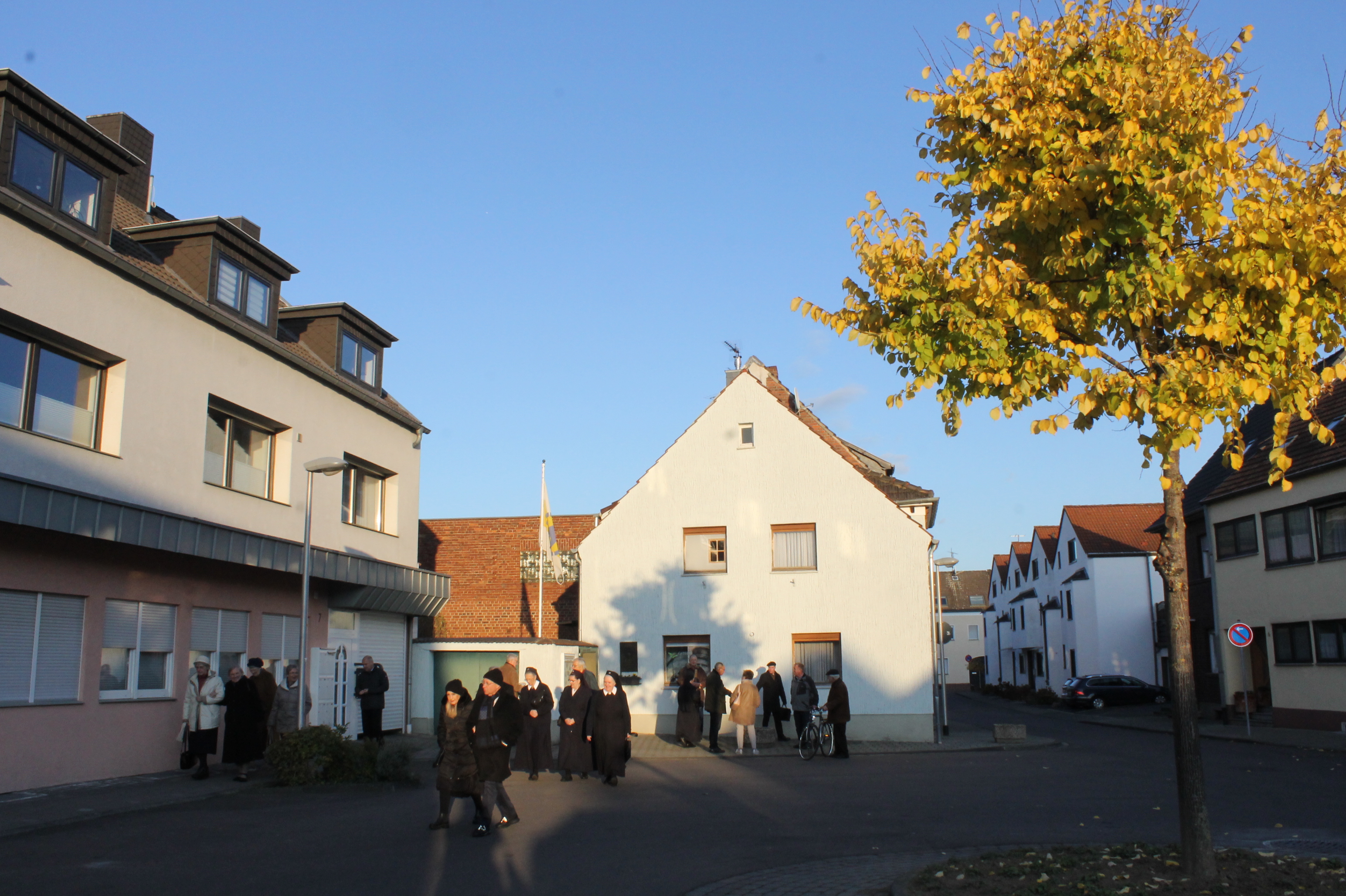 In front of Joseph Kentenich’s birthplace

“More have come than were announced”, Fr Pikos, the parish priest, said as more chairs and place settings appeared in the St Kunibert parish hall. “People have come today whom I have never seen before”, Fr Peter Nöthen, a Schoenstatt Father, remarked joyfully. For many years he has accompanied the life in and around Fr Kentenich’s birthplace and the church where he was baptised, and has developed a quiet, but fruitful, pastorate of attachments in Gymnich. If he didn’t know these people, it means they were there for the first time to celebrate the 134th birthday of the founder of the worldwide Schoenstatt Movement. 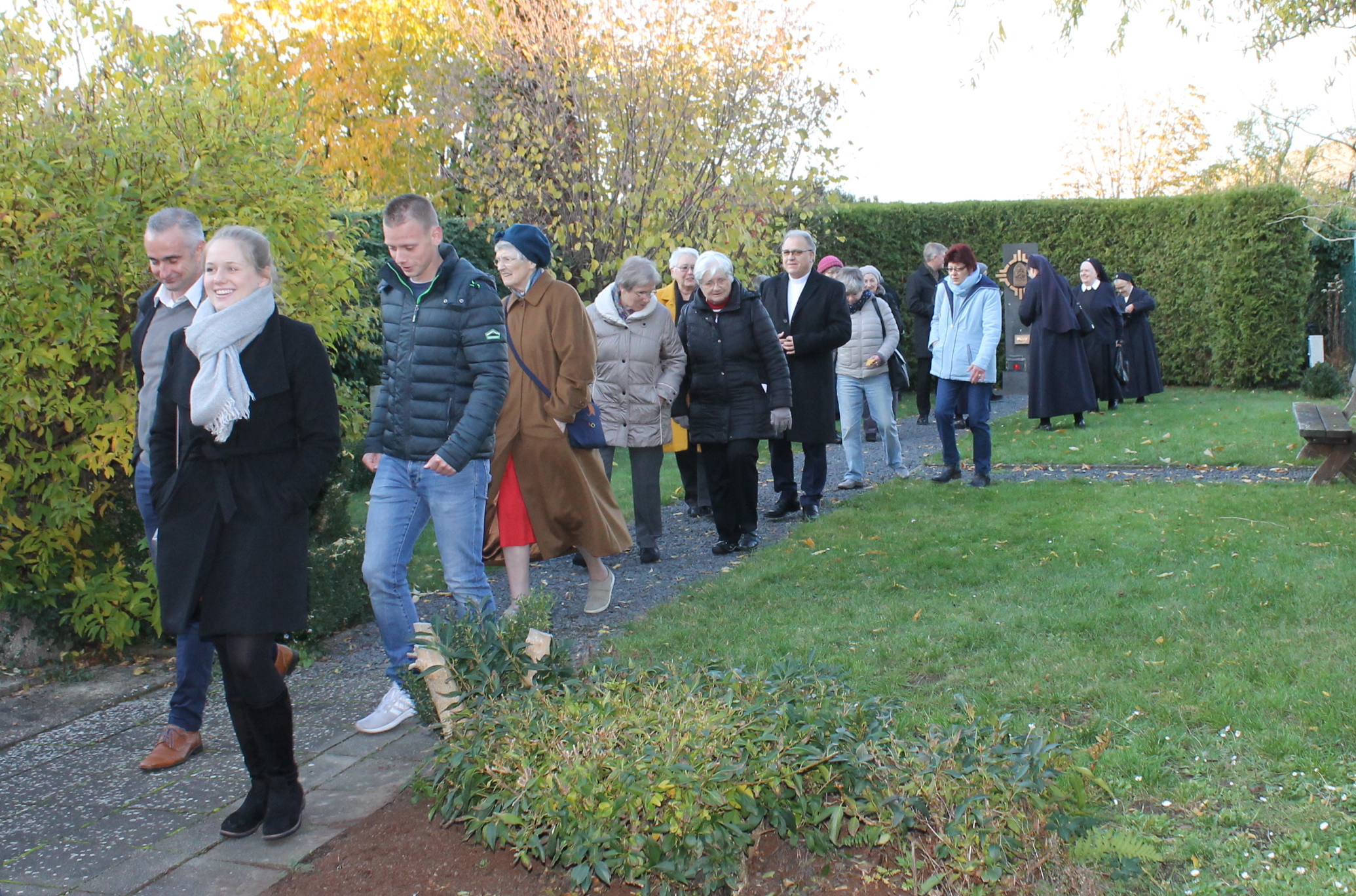 “Many people on every continent will be remembering this day and be connected with us in spirit. We invite you to celebrate this event with us at Fr Kentenich’s birthplace.” That was the invitation. The first comments from “every continent” arrived during the celebration via the social networks, where photos were posted live – from Mexico, Argentina, Paraguay, Chile, Brazil, Spain. “I don’t recognize it”, a woman in Argentina wrote who had visited Gymnich on a number of occasions almost twenty years ago. In fact it has changed and a lot has been done in the intervening years – the beautifully laid out garden with stele (small stone pillars) marking key dates in Fr Kentenich’s life, and a beautiful wayside shrine; the room where Fr Kentenich was born on 16 November 1885 has been re-created at the exact spot in the house where it happened; pictures by the Gymnich artist Marion Nitsche, the cabinet with the items found when the old well in the courtyard was unearthed – bits of old plates, cups, glasses, bottles, various tools and household objects, a pen …

Many of the visitors used the time to pray in the room where Fr Kentenich was born. Only the actual place is original, everything else has been reproduced to show what it probably looked like 134 years ago. A few contemporary pieces are there. However, the place itself makes Fr Kentenich tangible; it helps us to enter into the dramatic history of the birth of this “illegitimate child” of young Katharina Kentenich.

After a prayer at the wayside shrine in the garden everyone walked to the parish centre near the church of St Kunibert. 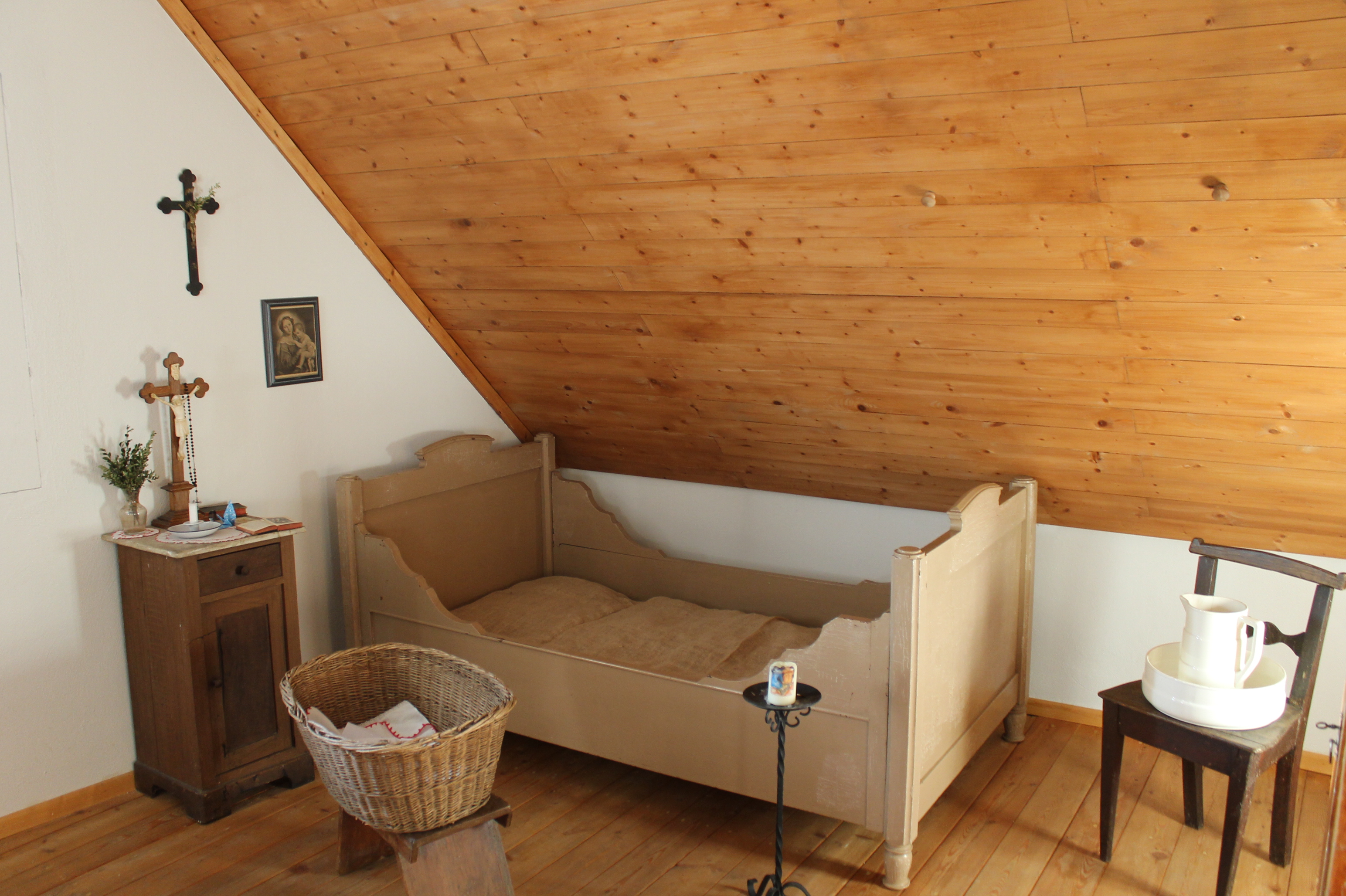 A prophet with a message for today

While the people enjoyed coffee and cake, the hall was filled with lively conversations. Fr Peter Nöthen handed out a birthday present to everyone – a brochure with one of Marion Nitsche’s pictures (who was present at the celebration), and the only photo we have of Katharina and Josef Kentenich (taken in 1898 or 1899). The brochure offered an introduction to Katharina.

Dr Christian Maria Löhr, Rector General of the Institute of Schoenstatt Diocesan Priests, has repeatedly attended the birthday celebrations in Gymnich. This year he gave the keynote address, which is always part of the celebrations. It contained many long, and sometimes even unknown quotations from Fr Kentenich’s works, and explained that this man and the statements he made almost a hundred years ago are absolutely topical in the Church today.

He mentioned the constant contact Kentenich kept with his co-workers, his statements about “nothing without you” relating to the Schoenstatt Family, his rejection of being a lone fighter, and the unconditional priority he gave to service to the cause. Germany’s synodal path (and that of the world, cf. Pope Francis) suddenly doesn’t sound so new.

He described Fr Kentenich as a warm-hearted person who invested his heart in this family, this little Church, he was building up. When we are looking for a warm-hearted and sincere Church, Löhr said, it is helpful and inspiring to look at Fr Kentenich.

He was a founder and priest who did not live in “selfie mode”, but who took the back seat and valued the life in people’s souls as a source of knowledge; he read in the actual lives of people, and even after years still knew what had come from whom into his own life and into the Schoenstatt. Could we say the same of our own lives? 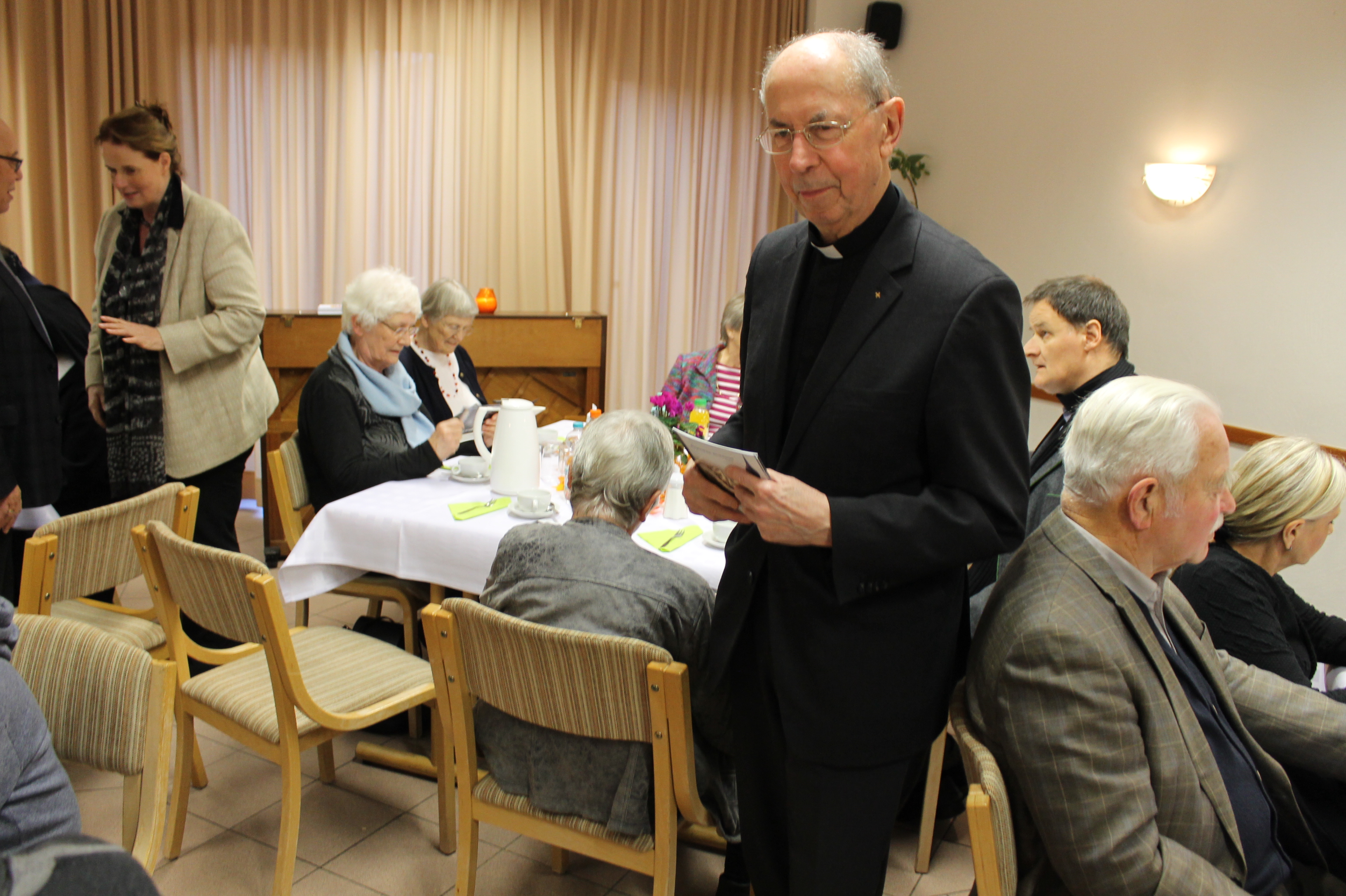 “Then the Church will lose modern people”

The last long quote came from a talk given fifteen years after Schoenstatt’s foundation (18 October 1928). Dr Löhr let Fr Kentenich speak, and it sounded as though it was said today:

All the religious currents that do not at least rest on the shoulders of the secular clergy will be condemned to unfruitfulness in the course of time. That is why diocesan priests play such a great role in our Movement. In addition, they have to live in the midst of our world which is infected by paganism. They are, therefore, constantly in danger of being infected by the pagan worldly spirit. For this reason it is important to gather them and bring them under the influence of the Blessed Mother here in our shrine. (…)

If the fate of the Church in its present situation is to be profoundly influenced from here, from our shrine, at least two other large rivers of grace have to flow out from here into the German and vast European countries, to water and fertilize everything.

Similar to, although not so strongly as for priests, but to a relatively great extent, the wellbeing of the world depends on woman. Those who know our world today, know how the nature of woman has been infected to its deepest roots, and hence has begun to totter.

We are facing a new epoch in history. Large and extensive groups of Catholics already recognize this. If, as Catholics, we don’t manage to take in hand and form the new type of human being, which the modern era has brought about since the discovery of the steam engine, the Church will – humanly speaking – lose modern mankind.

In the original way in which we educate people, also the new person, who is slowly becoming visible on the horizon of the future, can be inwardly embraced and formed in a specifically Christian way. Can you understand what I am trying to say? I don’t want to go a bridge too far; I don’t want to express all that I see and think; however, I do want to say: if we manage to form the new type of person as a Christian in our way, and win them inwardly for God, we will have shown the Church the way to  lead the world to Christ in the new era.

I suspect that we will have to go further later on, that our educational methods are also qualified to form modern man and give him to the Church. As I see it, only the principle we emphasise so strongly: As much freedom as possible, only as much obligation as necessary, but all the more cultivation of the spirit, will be able in the future, like the Star leading the Wise Men that came to a halt over the stable, to lead modern people back to Bethlehem, where they will kneel down and adore.

I believe that when academics later write a history of our times, and we may read it, we will see what has come of the tiny plant that has been placed into the earth here. When we see how much that is essential has been contributed from our shrine towards saving our times, we will be surprised that we ordinary, simple human beings have helped to support this great movement of renewal, or that seemingly out of silence and isolation, almost by itself, something has come about which the present era is longing for like people dying of thirst long for refreshing water. You have no idea that, and to what extent, you yourselves exemplify a completely new type of human being.” 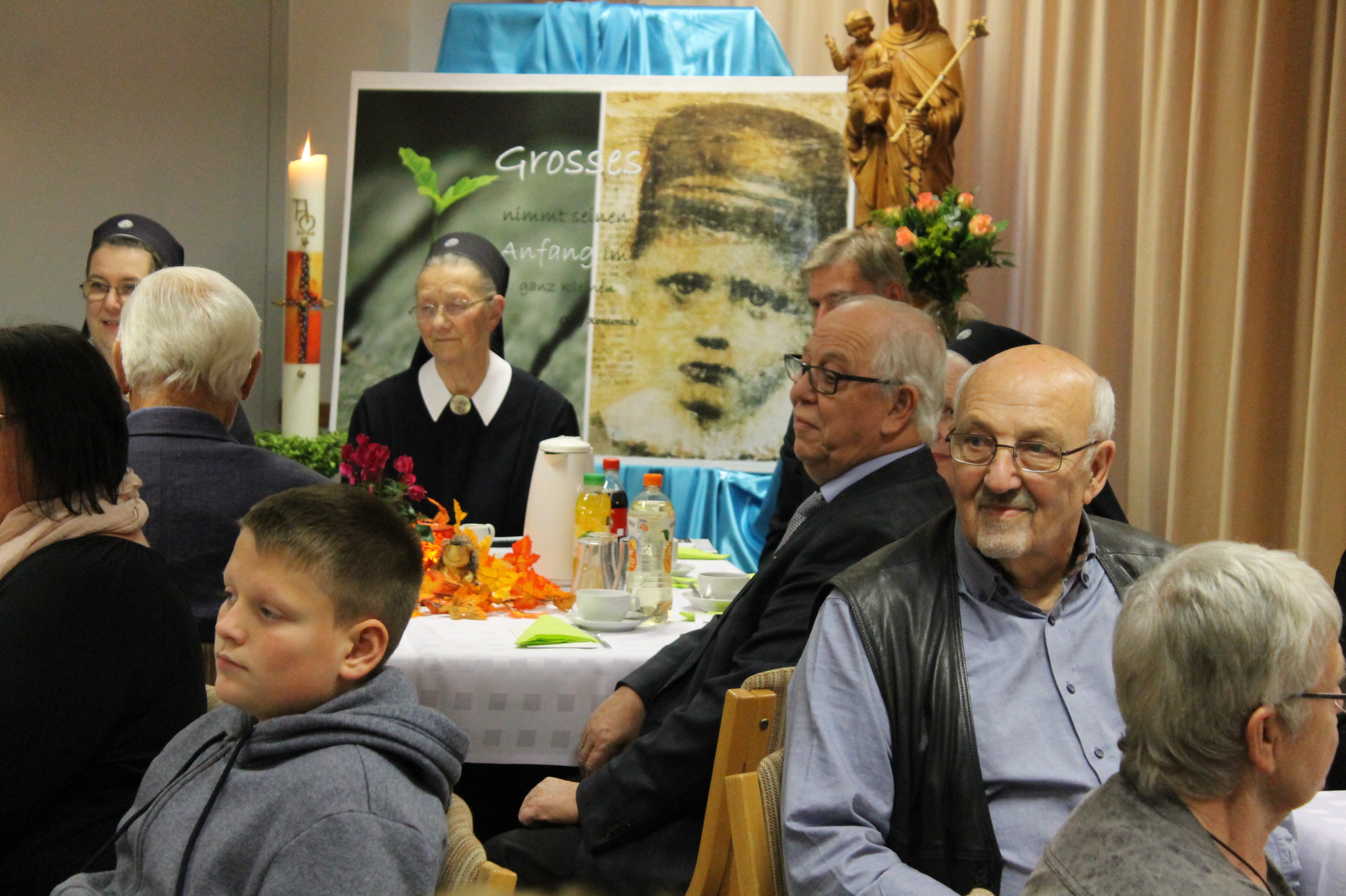 Renewal of baptism at the place where it all began

A highpoint of the Holy Mass that followed in the parish church, in which the first benches were filled with children, was the renewal of our baptism at the font where Joseph Kentenich was baptised on 19 November 1885.  Actually everything started here. This is the source of the covenant of love, the baptismal covenant between God and this child, whom many looked down on because of his “defectum natalis”, his illegitimate birth, which even in Schoenstatt was only whispered about in secret for a long time.

The priests went in procession with the altar servers and children to the baptismal font, and all present renewed their baptismal promises. As Dr Löhr had said in his sermon, also at a time that has distanced itself from the faith, we may be grateful, and cultivate gratitude, and never forget that even today God guides the destiny of the world – and does so through us.

His suggestion accompanied us into the evening, and perhaps even beyond, to envisage our own pictures around the large picture of Joseph Kentenich, because, like him also we, each one of us, is called and empowered to essentially co-decide the fate of the world and Church through our baptismal covenant.  Really and truly! 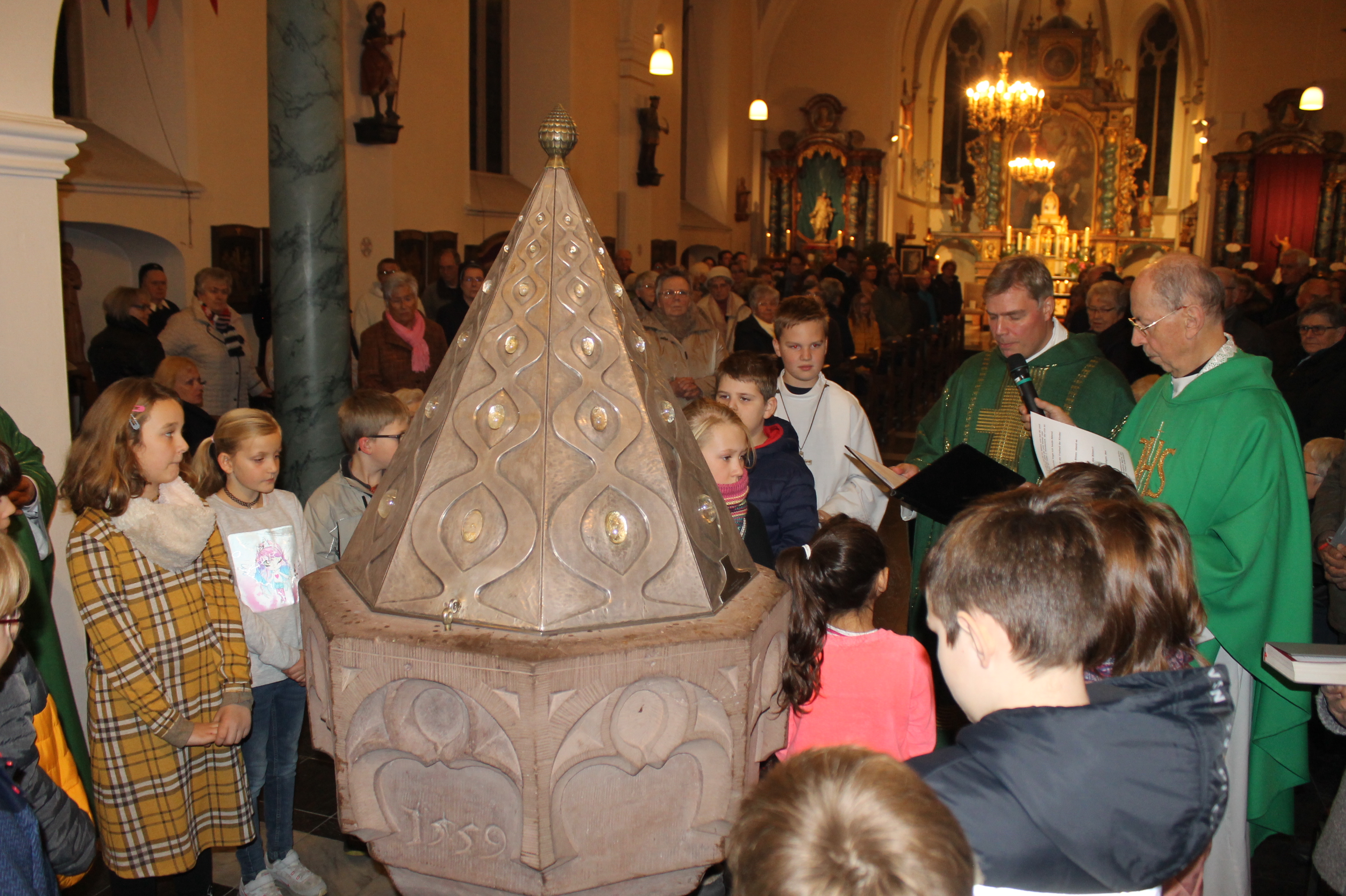 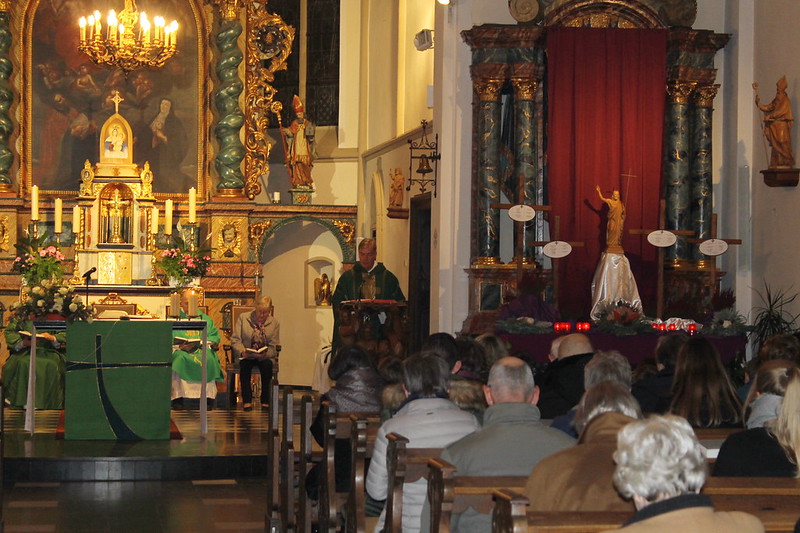