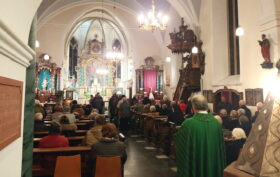 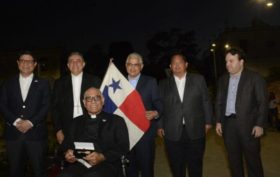 WYD PANAMA 2019, Paulina Soto and Maria Fischer • Father Rómulo Aguilar, pastor of San Francisco de la Caleta in Panama City, a parish with its wayside shrine that was “home” for Schoenstatt Youths during World Youth Day, received the keys to the city from Panama’s mayor for his work as a WYD organizer. Visibly moved, Father Romulo, the first Schoenstatt Diocesan Priest in Panama, received the distinction.—   Fr. Rómulo D. Aguilar received the “Key to the City” award from Mayor José Blandón Figueroa in recognition for his valuableRead More