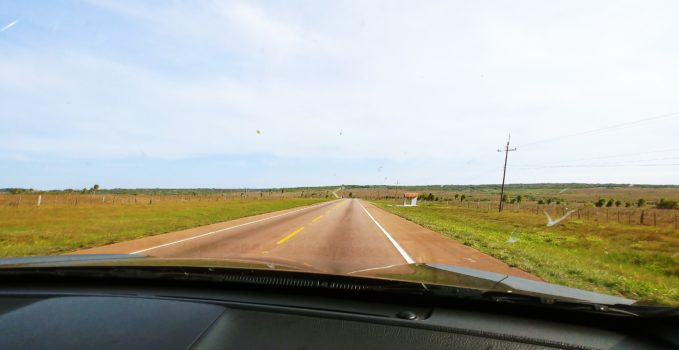 Posted On 2018-12-09 In Connecting Schoenstatters, Kentenich 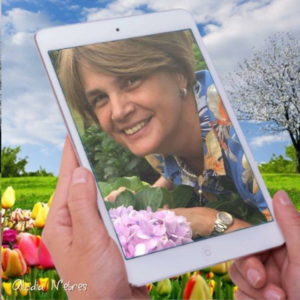 Glaucia Ramírez, a Brazilian, lives in Ciudad del Este, Paraguay. She and her husband are members of the first course of Family Federation in this region. A few months ago, she joined the schoenstatt.org team of collaborators. It is understood that a certain amount of madness is necessary to work with this schoenstatt.org adventure…This is how Glaucia offered to make a one-thousand-kilometer trip through all of Paraguay, just to meet the managing director of schoenstatt.org. But it became a special encounter with Fr. Kentenich, with the “Pilgrim Father,” Fr. Kentenich reaching out. An encounter that became a mission. —

Today it has been three months since I met Maria Fischer in Asunción. I am from Ciudad del Este, so I made a quick trip to meet her and take her to Encarnación. I began the trip at 5:00 am. It was pouring rain, everywhere, but I never encountered rain in route. 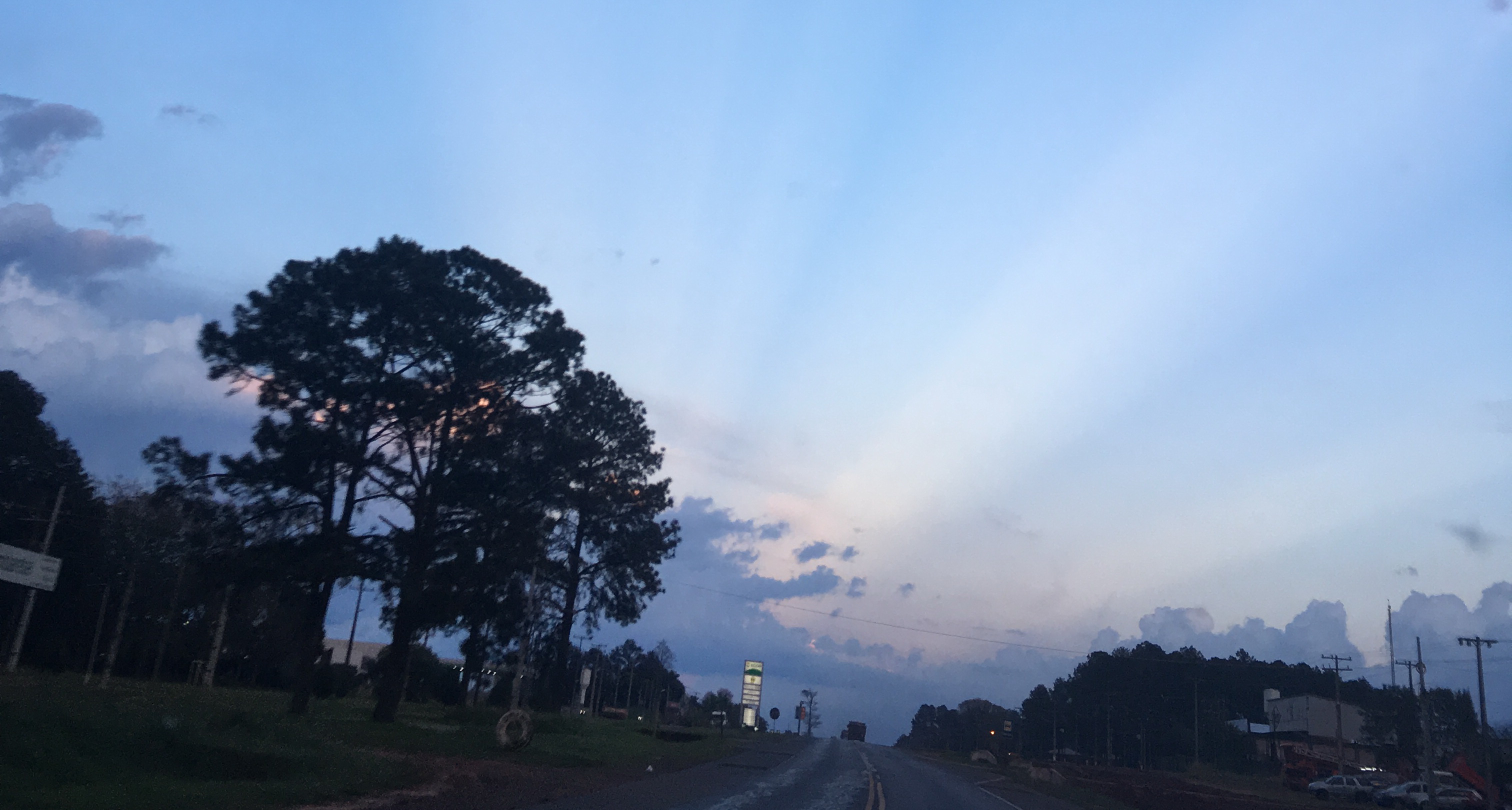 Photo: This is how the sky looked when I left to pick up Maria

Please come in; let’s pray in the Home Shrine

Everywhere I looked, there was rain. In looking for Maria, only its reflection was seen. I arrived in Asunción, following my GPS, however, I never understood it, I got lost several times, and when I finally greeted Maria Fischer, it was pure joy. When her host, Mrs. Mirta Contini de Etchegaray, brought her suitcase, she told me: “Please come in, let’s pray in the Home Shrine.” It was really beautiful; it was like finding a home, outside of your home. I happily entered, I was sheltered and emotional, I looked at everything when my gaze crossed with the paternal gaze, from a bust of Fr. Joseph Kentenich. 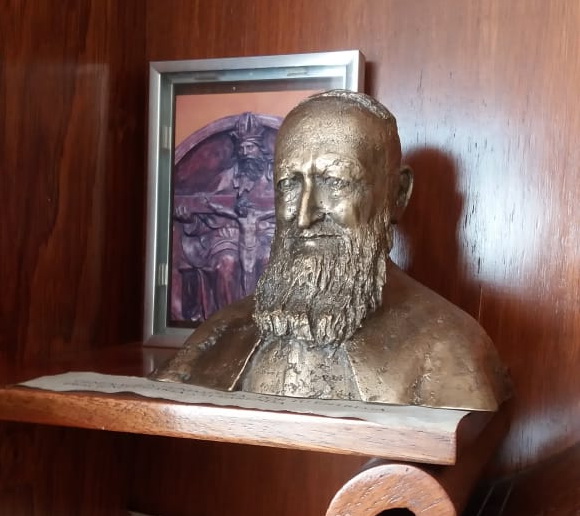 Fr. Kentenich’s bust for everyone

Then Maria asked me, “Do you see something different?” I really wanted to answer no! Since what I saw was something identical to our Founder. He seemed to me to be alive. Maria explained that this bust was a very exclusive sculpture of Juan Fernández, a Chilean artist. At the request of a lady from Argentina, he had created Fr. Kentenich for the Home Shrine. “Oh! That is divine,” I said. The bust is offered to all.
We began a conversation, and Mrs. Mirta shared several life testimonies, of crosses and giving of self. She explained that, among her apostolate, one is called Dilexit Ecclesiam, which consists in taking the “Dilexit Ecclesiam” to the peripheries. She has desired to take Father along. We continued talking when we realized that two “heavenly” hours had passed, and I had a 700 km (435 mi.) return trip home. 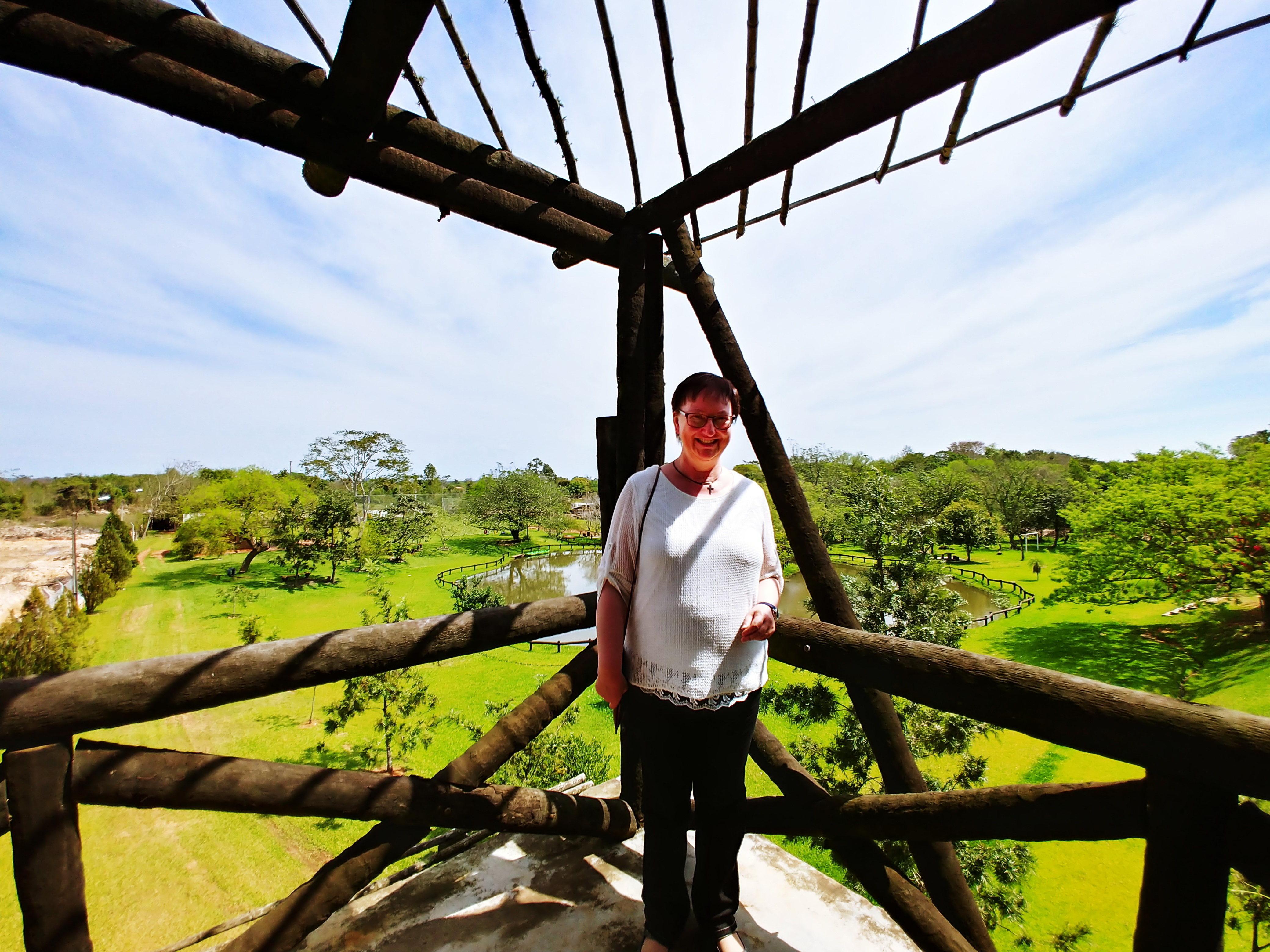 Abandoning oneself to the road’s adventure

We left Asunción for Encarnación. I thought I knew the road that would take me to the route, but I was greatly mistaken… Part of the road was under construction, and I never would have gotten on track without Maria’s help via her GPS on her cellphone, guiding us in German. I learned that arriving at the destination without knowing the road, one should know how to just go with the flow and let oneself follow the adventure of an unknown road, doing what the guide tells you.
It was afternoon, we were hungry, and we did not know where to eat. We searched local advice by smartphone, and we found something at a certain service station, but … we had taken another road. Shortly to our surprise, we found a restaurant with a beautiful view and good food.
On the road, we enjoyed the joy of living Schoenstatt, the Paraguay natural beauty, the warmth of people, and not a drop of rain. Many called to ask how we were since there was a lot of rain everywhere. 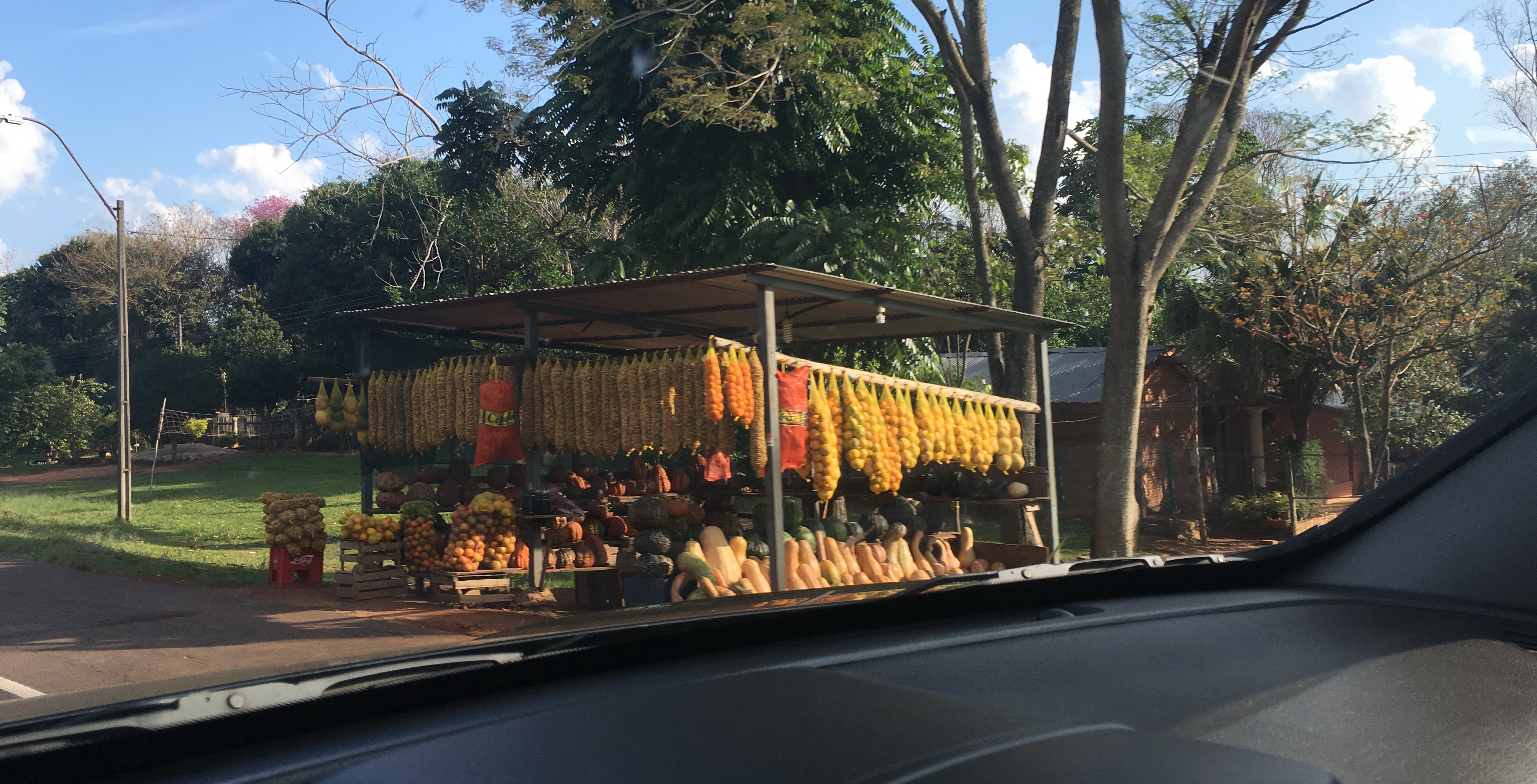 We arrived at our destination, guided by a voice in German, to the Blessed Mother’s “little house” in Encarnación. Strikingly our reference point was the hotel “La Misión”, the mission. At that moment, I confirmed that mine was accomplished: meeting Maria in Asunción and taking her to Encarnación,
I arrived home, after more than 1,000 km (628 mi), in a little more than eighteen hours, with a few stops, lots of laughter, many varied topics, we arrived at the conclusion that we were already friends, before meeting. Thank you, Maria, until next time. Yes, the rain finally got to me … but like a flood of blessings.

Today, exactly ninety days after the encounter with Maria Fischer, Fr. Kentenich’s bust visited us in Ciudad del Este. He had gone on pilgrimage, visiting, seeing, and blessing his children.
He was at the First Congress of CIEES in Paraguay, he heard the businessmen with their enthusiastic reports about projects carried out and those to be carried out in collaboration with the new social order.
He attended group meetings, course meetings, in a Life Style and Personal Idea Retreat.
What a great gift, on the Fifty Years since his death, Fr. Kentenich has visited us as a work of art. As his creator Juan Fernández said: “His mission was to mold an authentic and “living” figure of Fr. Kentenich.”
May something of Fr. Kentenich remain in each person that takes his hand in this statue, this image of him, sees him, embraces him. May something of each person remain in Fr. Kentenich, and thus, he remains alive.
Let Schoenstatt not diminish our Founder, let’s not make him smaller according to our ability to understand and realize. Let’s not mold him only into what we can accept or think that is acceptable, but instead, let’s mold him according to his figure.
His paternal figure is present today before the third generation that is getting involved and seeks to find its originality, ideal, for that which God our Father has created us, and that he may mold us by the Blessed Mother’s hand, like soft wax, through the pedagogy of our Father and Founder.
We also talk about a lifestyle, which will lead us to live and deepen in the Gathering of Hoerde’s spirit, that is almost 100 years old, focusing on the five fundamental aspects: communal, apostolic, striving for holiness, freedom, and magnanimity.
Thank you, Fr. Joseph, for every visit, for every blessing, for every impulse. Beyond the Home Shrine, you have called us to think about the infinite Mercy of God the Father, and therefore, we will be loyal pilgrims, acting with confidence in Divine Providence, with our hand on the pulse of time and our ear listening to God’s heart.

Let us end with the retreat prayer:
Under Mary’s protection,
we want to learn to self-educate ourselves
as firm, free, priestly personalities.
As Mary’s instruments,
we will be bearers of Light and Joy.
On your boat, Mary,
Yes, of Maria Patris
on the road with the Blessed Mother,
we want to be seeds of the Kingdom
With hearts loyal to Mary 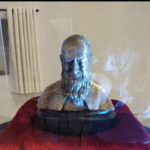 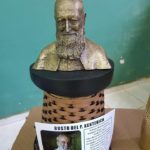 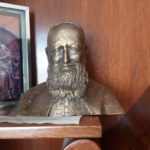 If one Pk4U bust of Fr. Kentenich for the Home Shrine, of Fr. Kentenich reaching out, can already touch so many…what will happen when there are 20, 25, 30…in Paraguay? We will see it, since there will be that many coming in January 2019.

All other countries [email protected]