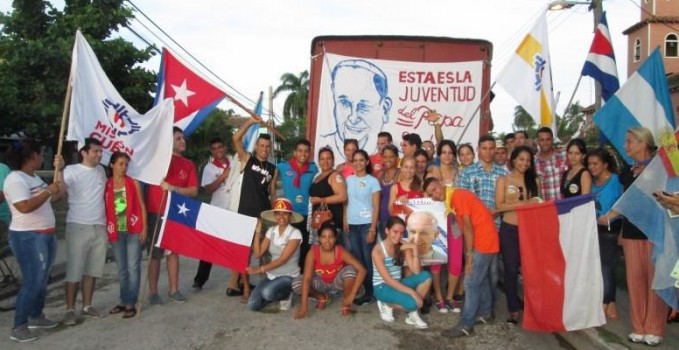 Over here the Pope revolutionized us: Youths from Mission Cuba at Francis’ visit to Holguín

CUBA, by Juan Vicente Escobar, Misión Cuba of the Chilean Boys’ Youth, relating how they experienced the Pope’s Francis’ visit to Holguín •

Over here the Pope revolutionized everyone. When he arrived in Cuba, the parish bells rang and the entire community saw his arrival on Fr. Bladimir’s television.

The youths departed Sunday morning at 7:00 a.m. We traveled in three buses, and there were about 120 youths, who were picked up on the way because they were from the entire province.

It was very tiring, but the atmosphere was very cool; we had many flags. Throughout the trip, we sang, shouted, and we got down everywhere we stopped. All of us went to the square to shout, dance, to do everything, the buses were covered with things about the pope, and it was a lot of fun. 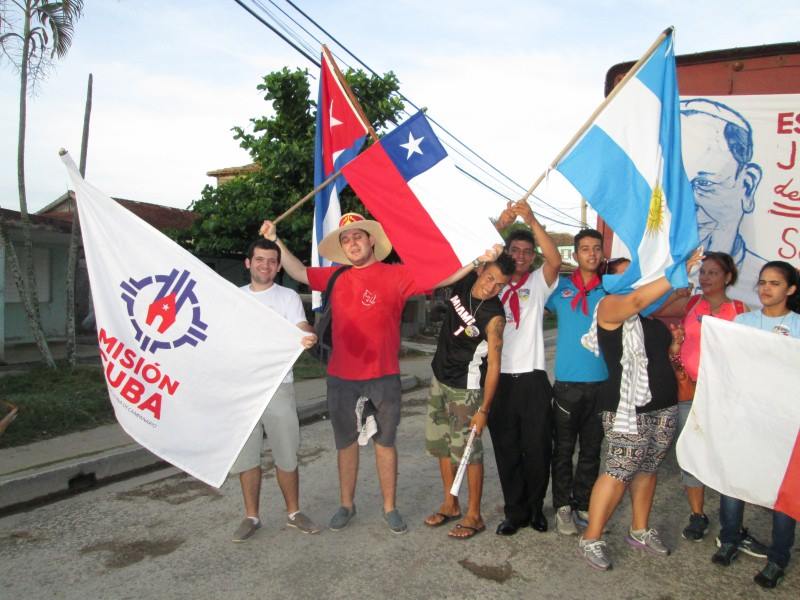 Sunday afternoon we arrived at Gibara, a town close to Holguín; it is a very beautiful place, a tourist spot with lovely homes, and it is very small.

During the night with all the youths at the Gibara church, we held a vigil, which was very good. The youths from Santa Cruz organized it, so we had to help them, and we participated in several things: we danced, we prayed and we went to bed at 1:00 a.m. here at the church. We had to wake up at 4:00 a.m., because the caravan of official buses provided by the government for everyone who wanted to go were coming at 5:00 a.m. So we didn’t sleep very much, for instance, I slept only about an hour and a half. 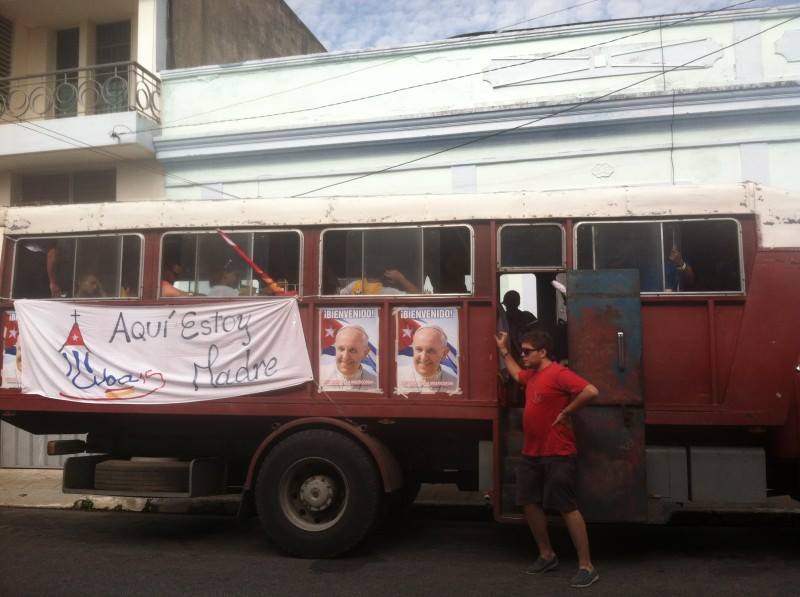 We were the only ones from the entire world with flags

The next day we arrived at Mass carrying many flags (we were the only ones with flags, so everyone noticed). We carried flags from Schoenstatt, Chile, Argentina, and a Spanish flag that girls from Spain had left. (Approximately twenty-five members of the Girls’ Youth from Spain were in Cuba for some time). It was very funny; we appeared to be an international delegation!

We saw the Pope pass by three times close up in the popemobile, because we were next to the barricade. Truth be told, we did not pay too much attention to the Mass because it was very hot! We were in the sun, we could not hear very well, and it was very crowded. I was very sunburned… 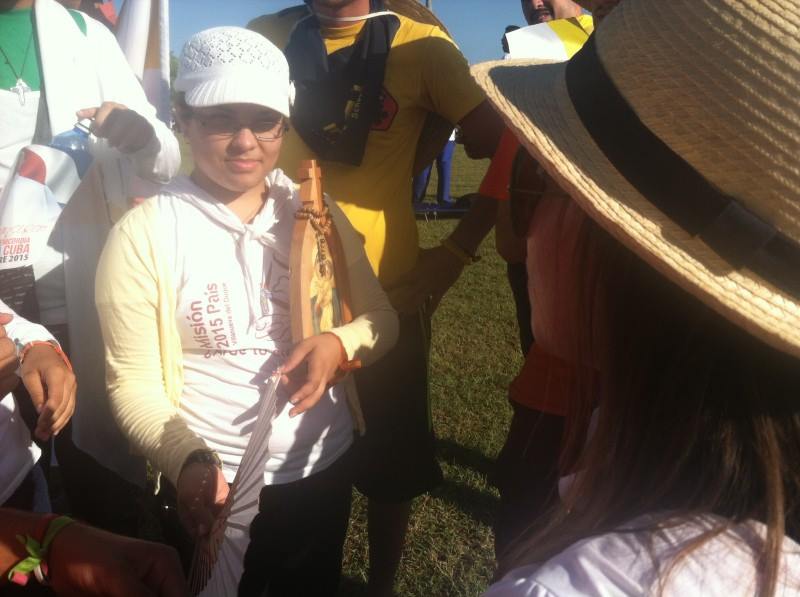 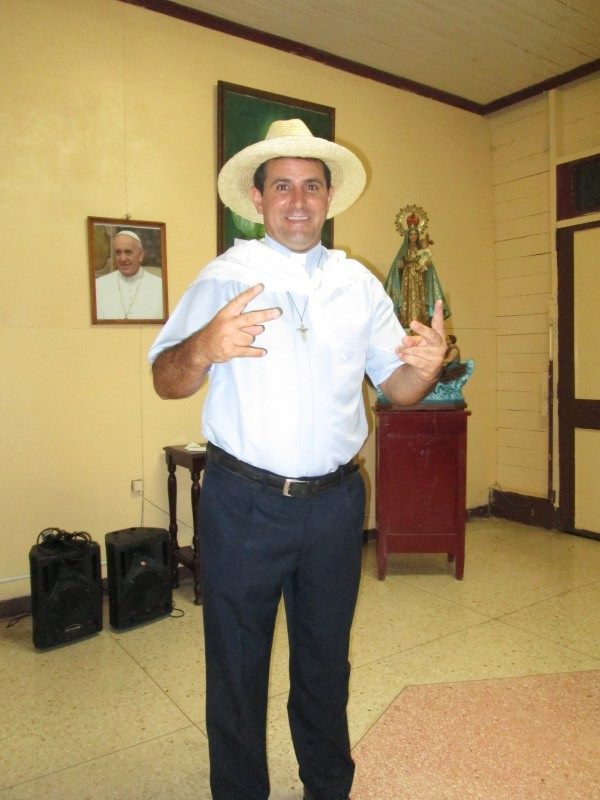 Afterwards we went to lunch, and then as the Pope would bless the city from a hill, we went there. We carried the flags, and we arrived at the street where the Pope passed and Father Bladimir got into the street, where everyone was waiting along the paths (because there were no barricades), and we ran through the street singing and shouting. We traveled several blocks, and no one knew what was going on. We took photos, we videotaped, we looked “official”, it was very amusing. We were like the Pope’s brave fans; we did all of this in the rain that began to fall, and we were drenched as we ran.

We saw him pass again in the popemobile; we returned yesterday afternoon at 5:00 p.m. We were delayed in returning because in the middle of all this a bus broke down; it took about an hour to fix it. Meanwhile everyone played outside: we danced salsa, which we had not learned very well; we arrived last night around one; we were dead tired. Today we slept all day, and we were still tired.

But the pilgrimage was very good, most of all because of the Pope and the atmosphere that was generated. Everyone was very happy. 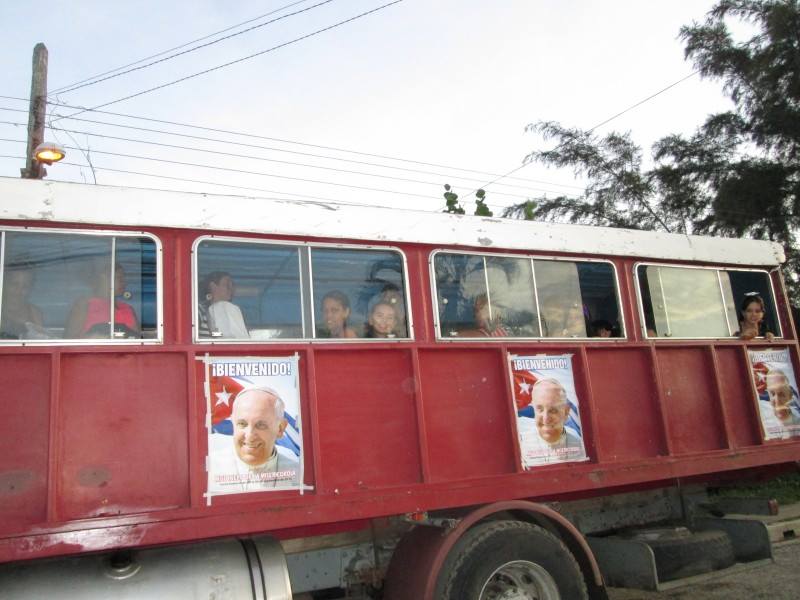 Mission Cuba is a project of the Boys’ Youth from the Shrine of Campanario, Chile. Now at Fr. Bladimir’s invitation, there is a second team of Schoenstatt youths at Camagüey, the city where Fr. Bladimir is working with Schoenstatt groups. They will be at Schoenstatt’s service in Cuba for a few months. Approximately twenty-five girls, who belong to the Girls’ Youth from Spain, were also in Camagüey for a few weeks. Schoenstatt was brought to Cuba ten to fifteen years ago by the first generation of Mission Cuba. 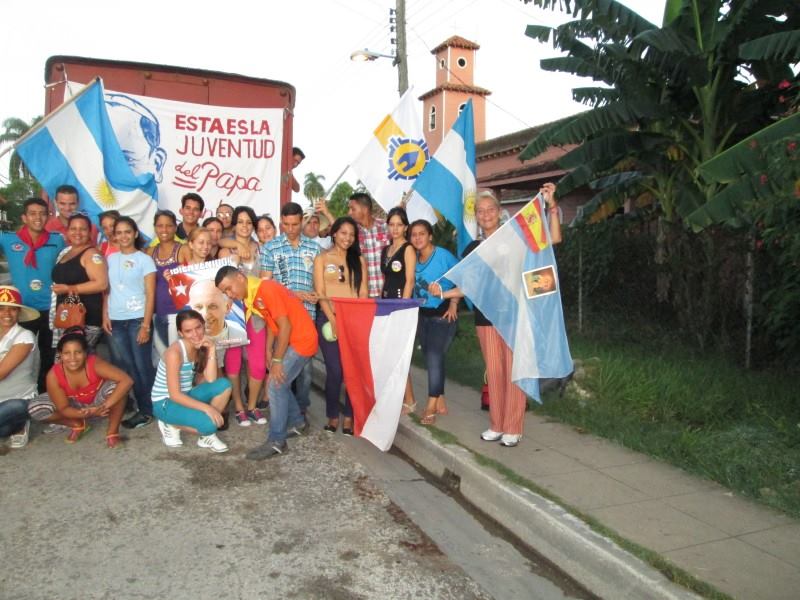 Videos of Mission Cuba on the JM from Chile website