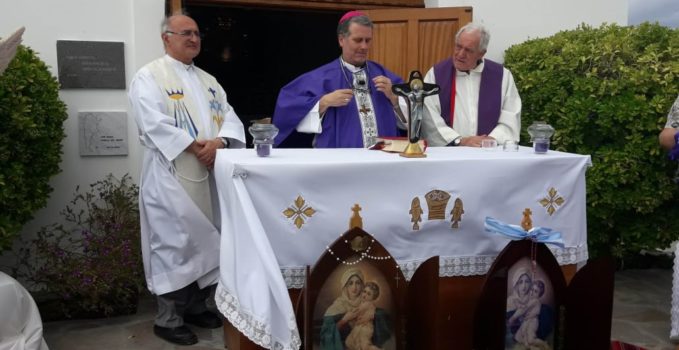 Tierra de la Promesa (The Promised Land) Shrine of Rawson, Chubut recently turned twenty-five years old. Memories and a “movie” of experiences, which have meant growth in some aspects, as well as concerns in others, filled us. This shrine’s birthday also presented us with the challenge of continuing to go forward with our mission: our personal mission and the mission of the shrine—in short, the Schoenstatters’ mission in today’s world, in perseverance of self-education. —

This event filled us with renewed energy, and we worked hard in pursuit of manifesting the anniversary’s joy and sharing it with brothers/sisters in the Faith. 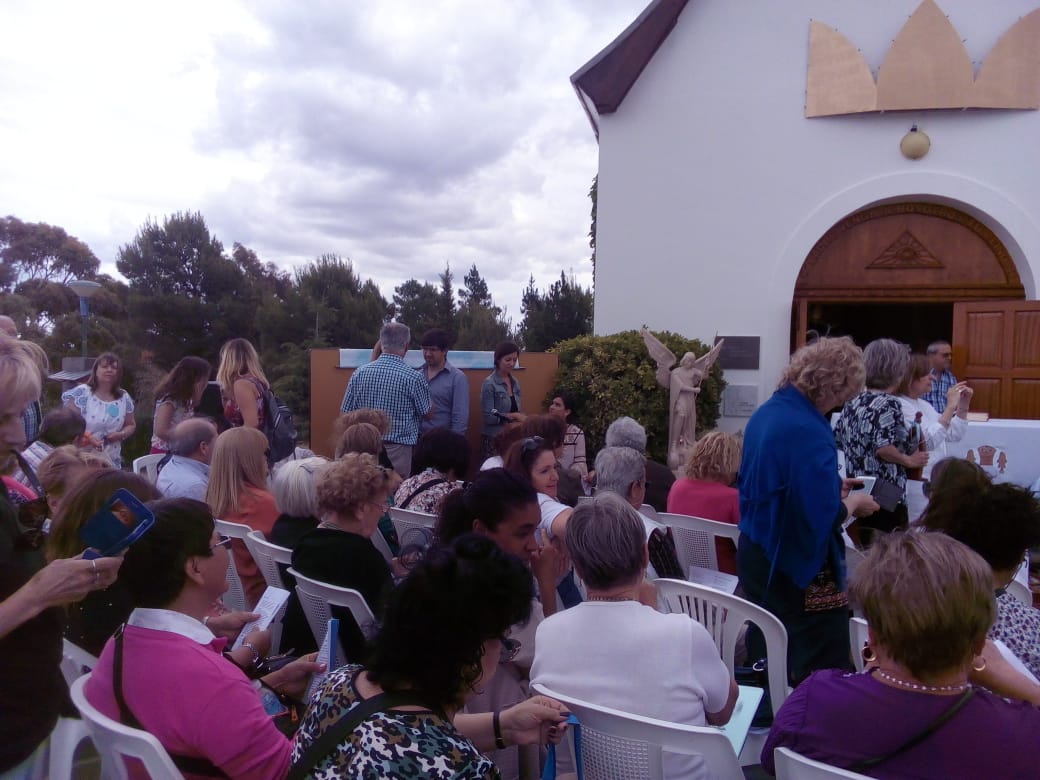 At 7:00 pm in the “Tierra de la Promesa” Shrine, Fr. Ludovico Tedeschi celebrated Mass; it was very warm in remembrance of the blessing and the Movement’s beginnings.

Father referred to the rootlessness of those who reside here, because we chose to stay, and not return to our starting place, the same way the Blessed Mother chose this place to establish herself and radiate her graces. Many of the Schoenstatt Family members live in Rawson, Trelew, and Madryn; they came from different places around the country, to work, to form a family, and they remained in the Patagonia they love.

Going to the most needy

Pictures of the Mother Thrice Admirable (MTA) were given to the pilgrims from the Michay of Trelew group. Begun by a Salesian priest, this is a group of missionaries attached to María Auxiliadora of Trelew parish working in the Patagonia mesa area, accompanied by the parish priest who celebrates the Eucharist, and helps prepare people to receive the sacraments, in places where there are no priests. They also take food and clothes to those in need. On this occasion, they decided to depart for the mission from the Tierra de la Promesa Shrine, and they were given a picture of the MTA that was blessed on December 12th. They asked for a Pilgrim mother to take, but because of the celebrations, none of the missionaries could accompany them to convey the campaign’s meaning, so it is pending for another time. The Rosary Campaign from Trelew collaborated with food and Christmas bags. 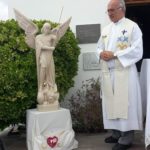 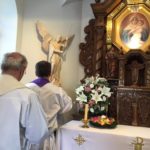 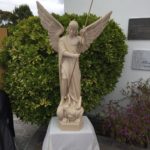 Reliving and celebrating 25 years of history

At night, the celebration at the movie theater was pleasant, and there was a mixture of excitement and laughter. The memory of those twenty-five years Carlos Papiani put in a video was touching. The video also was in Memoriam and gratitude for the giving of self of allies in Heaven.

Little girls from a Jazz/Ballet Dance group performed at the beginning through teacher, Karina García’s successful direction. After the dance, they set up a Shrine on stage, placing a picture of the Pilgrim Mother in the doorway, which accompanied everything that developed in the show.

Karina García danced one of her beautiful creations, which began the Memoriam, and throughout the piece while pictures of our allies in Heaven were shown, Gabriela Carel sang a song she wrote for this moment.

A group of mothers, energetically and joyfully interpreted a funny ballet, which delighted and evoked laughter.

Music Ministers from the Rawson parish made this meaningful celebration pleasant for our family, with their generosity, their guitars, and voices. Their presence showed the unity of the People of God in all the events.

Marcelo Juy, from Channel 7 Rawson, was the master of ceremonies who led the Festival; he demonstrated his experience bringing a family-like, laidback touch.

The voluntary and generous contributions of non-perishable food from the participants were put into Christmas baskets that were distributed among needy families. 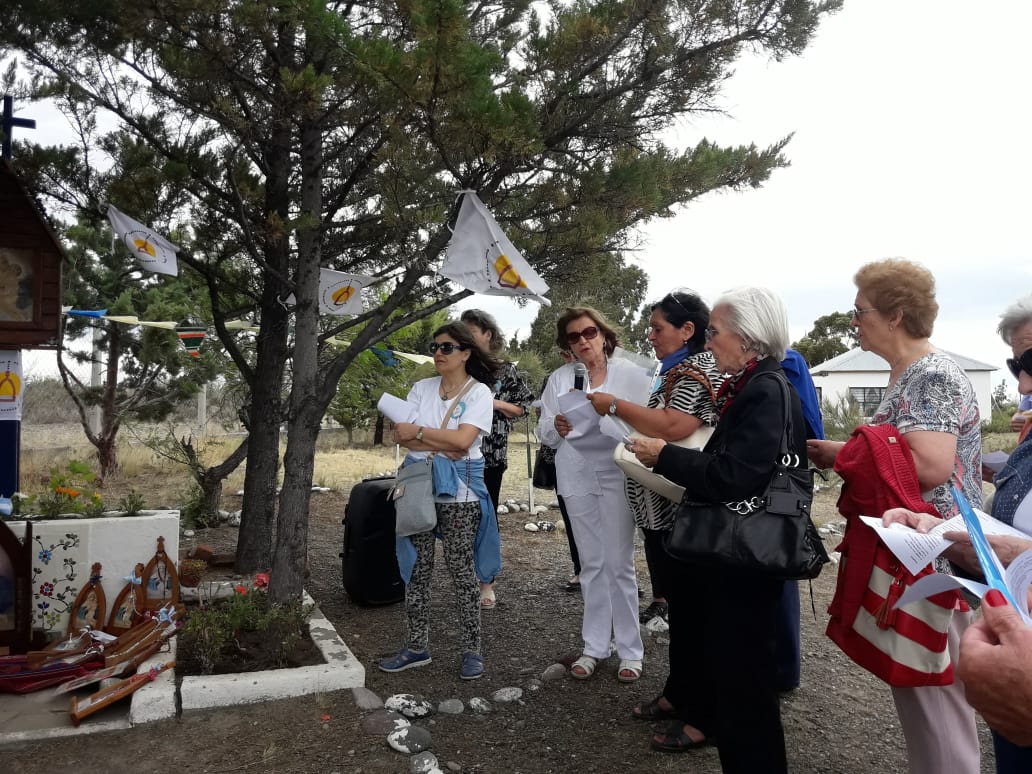 This popular festival was held on 16 December.

The Rosary Campaign began at 11:00 am with a rosary on the grounds of the shrine at the wayside shrine that prepared our hearts, and the missionaries renewed their commitment.

The Mass, with the Comodoro Rivadavia Auxiliary Bishop’s presence, Fr. Roberto Álvarez, the pastor of Rawson, Fr. Juan Nota, and Fr. Ludovico Tedeschi, was celebrated in front of the shrine with a large number of people. It was a beautiful Mass during which a statue of St. Michael was enthroned that was spiritually and materially conquered throughout the year. The Patagonia wind, like that of the gathering of 1993 was present, and the Lord and the Blessed Mother blessed us, and as it always happens in our celebrations, there were a few drops of rain.

The choir accompanied us with beautiful songs, among which we sang “To Patagonia” from our Cantata ’88. A couple from Comodoro and our Girls’ Youth from “all times” that is, the adults made up the choir. In 1988, a Patagonia Gathering was held in Rawson for which a Cantata of five songs was composed, Luis Ricci wrote the music, and this article’s author wrote the lyrics. One of them is called “To Patagonia;” the lyrics say: “The Blessed Mother calls us to Patagonia, to Patagonia…” It tells how we come from different directions to find ourselves here.

Then a shared lunch with a large number of diners celebrated the moment’s happiness and emotion. A greatly sought after buffet was served with “locals” from Rawson, Trelew, and Madryn attending, and there were visitors from Paraná and Hasenkamp (Entre Ríos), La Plata, Esquel, Gaiman, Comodoro Rivadavia, Madrugadores were also among them. The festive tone permeated the gathering and joy was the guest of honor.