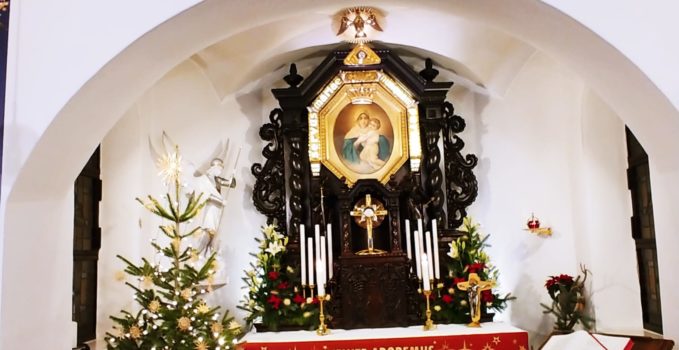 Closed for renovation: From Wednesday, 9 January, the notification that can be seen on so many old buildings will apply to the Original Shrine, which is closed until 31 January. In these weeks when the youthful heart of the Church as a whole beats for the World Youth Day in Panama and the neighbouring countries. And the “heart” of Schoenstatt is closed for renovation.—

In the coming three weeks technology will be installed in the Original Shrine for live TV broadcasts from the Original Shrine. The great work of schoenstatt-tv is ready for an upgrade, and it will become technically possible to do what is possible and very popular at almost all the other large places of pilgrimage in the world: to make virtual visits via the internet. It is a big step when you realise that at present it isn’t even possible to send a WhatsApp notification, or even a photo, directly from the Original Shrine, because it is in a dead zone. At the same time maintenance work will be carried out and the shrine will be re-painted.

The morning Masses in the Original Shrine, which are usually attended by local residents, as well as the evening blessing, will take place either in the Pilgrims’ House, or in the nearest shrine at the Marienau.

Then, in the evening of the feast of the Epiphany, someone got an idea. Let us bring all the shrines of the world into the World Youth Day mode and paint the map of the world showing the Schoenstatt shrines with the WYD logo. Less than an hour later Matias Fortuno announced: “It’s done!”

Let us accompany the youth and Pope Francis from all, yes, all the shrines in the world in these weeks, and pray that the Original Shrine is also “refurbished”, not only with a new coat of paint, but also in its worldwide mission.