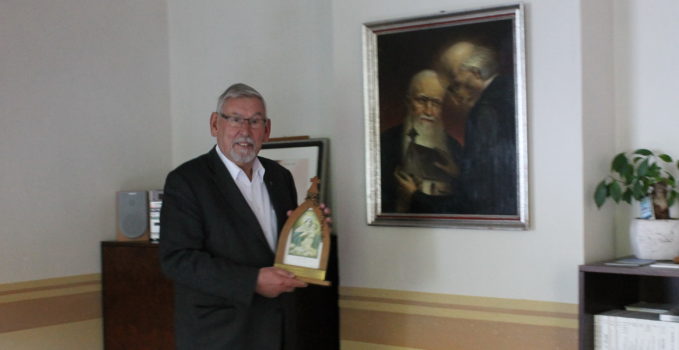 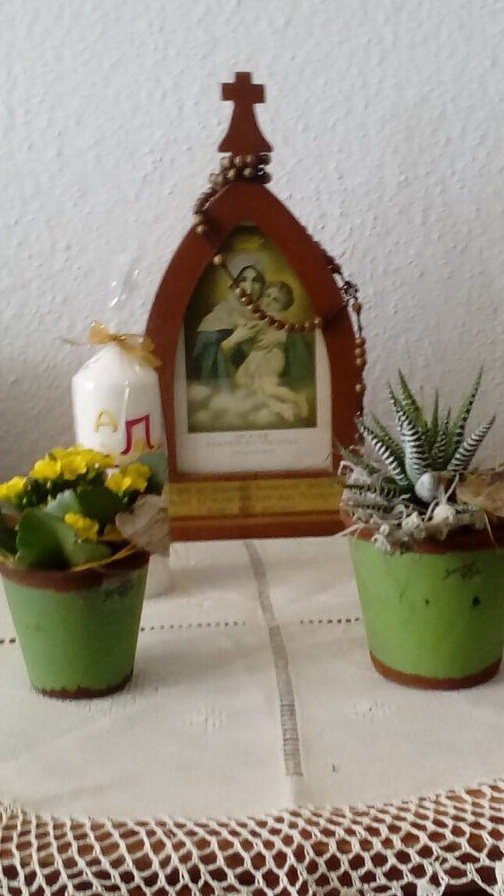 After more than two years on pilgrimage and working in Argentina, Uruguay and Paraguay, on 9 May, the day Fr. Esteban Uriburu (1937- 1998) would have been 80 years old, she returned to Schoenstatt to be entrusted into the hands of her new custodian, Fr. Egon M. Zillekens, the Rector of House Marienau.

She is the Pilgrim Mother that was in João Pozzobon and Fr. Joseph Kentenich’s hands, in the hands of personalities such as Brother Germano Arendes and Fr. Heinz Künster just to name two, and in the hands of the Schoenstatt Rosary Campaign’s many missionaries that desire to be like João Pozzobon, hands and feet of this Blessed Mother reaching out toward the existential peripheries of humanity.

She is the very same Pilgrim Mother João Pozzobon gave to Brother Germano Arendes on 19 March 1968 to give to Fr. Joseph Kentenich and “to enrich the origin,” as João stressed.

Years before, according to his own testimony, Pozzobon received the grace of “understanding the origin” and he felt like “a small disciple” in Fr. Kentenich’s school, wanting to share the mission that Mary entrusted to the Founder.

During the years of his apostolate, the small disciple grew and profoundly understood what Fr. Kentenich called his desire to create a return current – a Marian and organic current of enrichment of the origin, from the countries he went to visit since the year 1947, in search of allies for this mission.

Fr. Kentenich called on the Spanish-Portuguese speaking countries, not only to be recipients of the grace and mission received from the European countries, but rather, to return what they received.

The disciple becomes Fr. Kentenich’s ally and seeks to do what he asked of his Latin American allies: to enrich the source. He does with it with the best of himself, with his life’s mission – with “Mary reaching out” with the Pilgrim Mother. 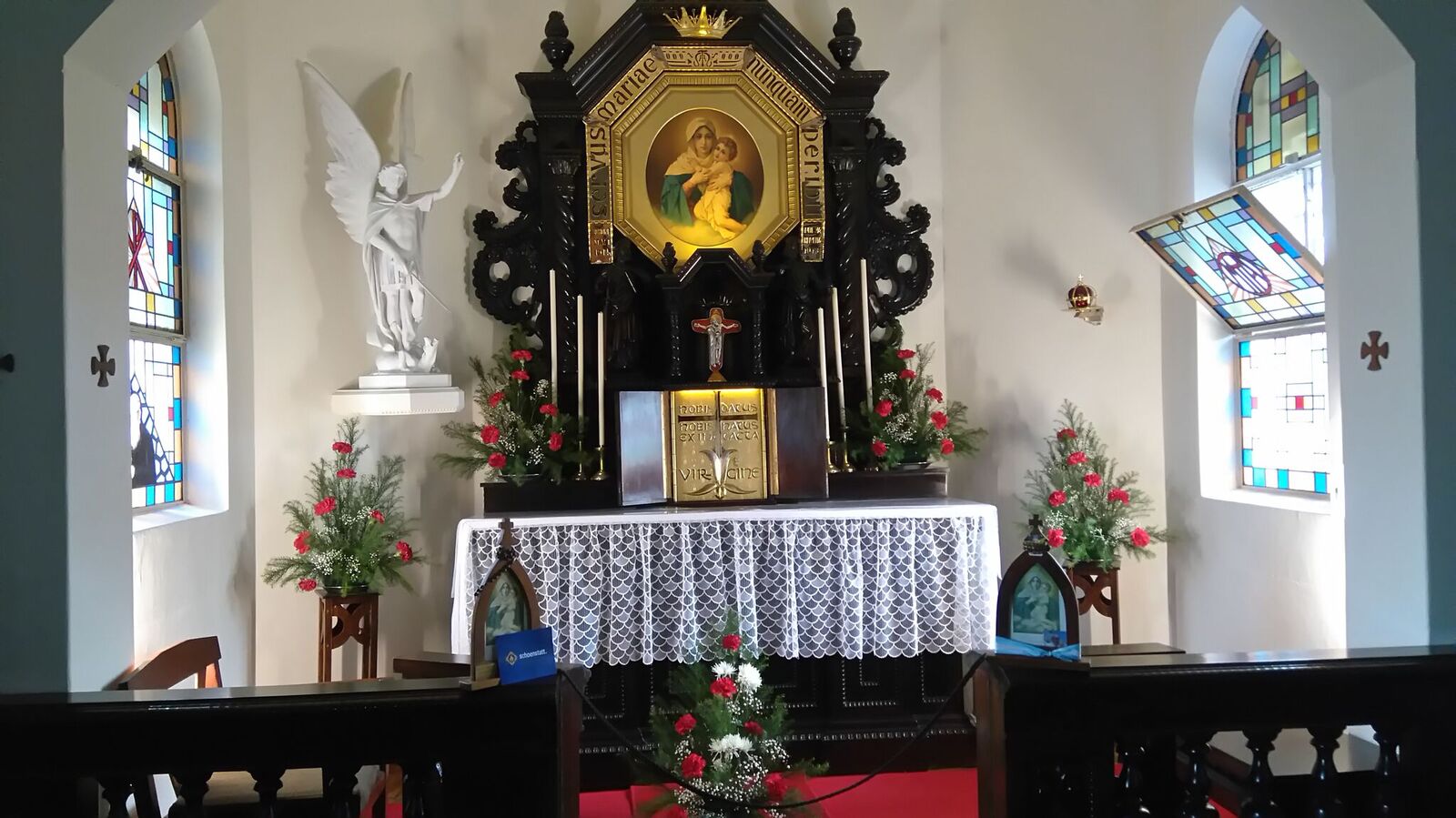 Photo: In the Shrine of Nueva Helvecia

The pastoral we need

The presentation of the Pilgrim Mother took place on 11 April 1968, Holy Thursday, in that room in House Marienau, where the Father and Founder usually ate and invited his guests to eat with him. It was at that moment that Fr. Kentenich asked Bro. Germano Arendes to explain the mystery of the Campaign to a large group of priests (he did, but without success). It was at this moment when the founder of Schoenstatt said: “Do you see how in the work of João Pozzobon we have a living demonstration of what Vincent Pallotti said with regard to Our Lady. “She is the great missionary; she will work miracles.”

Referring to the efforts in Schoenstatt circles to find a contemporary pastoral orientation, Fr. Kentenich turned to two priests who accompanied him and said to them:

“Our priests, especially the younger generation, is looking for a new and modern pastoral method. Here it is. “(…) What João Pozzobon was doing was in line with the sort of pastoral method they needed: “He gives Our Lady the chance to be active.” Toward the end of the gathering, he referred to Deacon Pozzobon again, he said: “Do you see how in the work of Mr. Pozzobon, all the basic forces of Schoenstatt are at work?” (Uriburu, Esteban J. A Hero Today Not Tomorrow, pp.27, 28).

Weeks later, upon learning about the presentation of his Pilgrim Mother to Fr. Kentenich, João Pozzobon understood it “as a return of the 31st of May to the original source.” 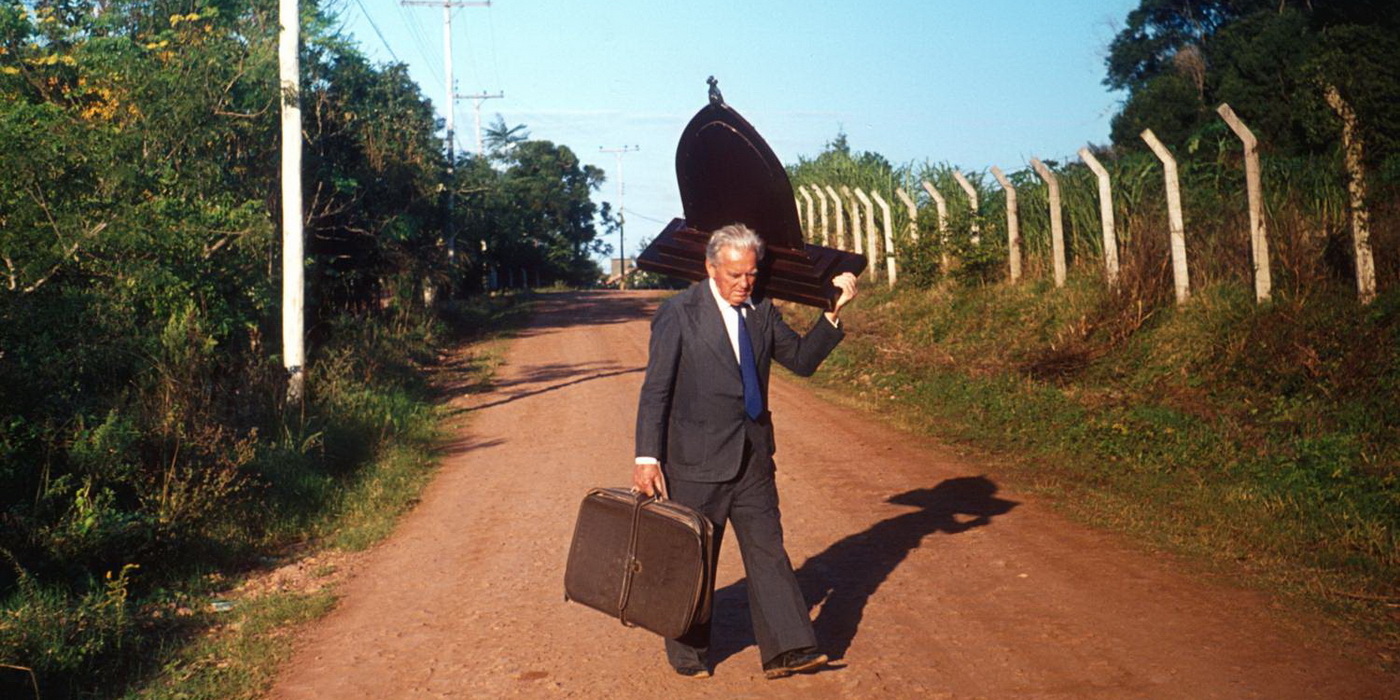 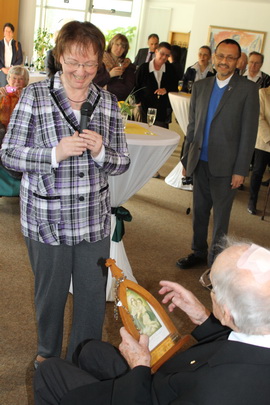 Fr. Kentenich entrusted this Pilgrim Mother, which the Argentinean missionaries soon called “Father’s Pilgrim Mother, to Fr. Heinz Künster.  After Fr. Kentenich’s death, she received a place of honor in the Founder’s Room at House Marienau that since then and until now has been kept without change and is open for visits by all pilgrims who come to Schoenstatt – whether they want to drink from the source of origin or whether they come to enrich the origin.

It was at the beginning of March 2015 during the celebration of his 90th birthday that Fr. Heinz Künster gave Father’s Pilgrim Mother to me to take to Argentina at Monina Crivelli’s request and to Paraguay at my own request. It was a simple and sacred moment. Did Fr. Heinz Künster know that he would not see her again? (Fr. H. Künster died on 1/11/2015). Something about the solemnity and holiness of that moment made me think that yes. It was a missionary farewell…joyful, grateful, with hope.

Now she has returned to House Marienau. Was it a coincidence that the commissioning of the Pilgrim Mothers for the countries outside of South America, during Fr. Kentenich’s centenary in 1985, also took place in House Marienau? Is this house, a few meters from the Original Shrine, the place of a mission that attaches Fr. Kentenich, João Pozzobon, the Campaign, and the mission of the 31st of May, the grace of understanding and enriching the origin?

Father’s Pilgrim Mother is back. 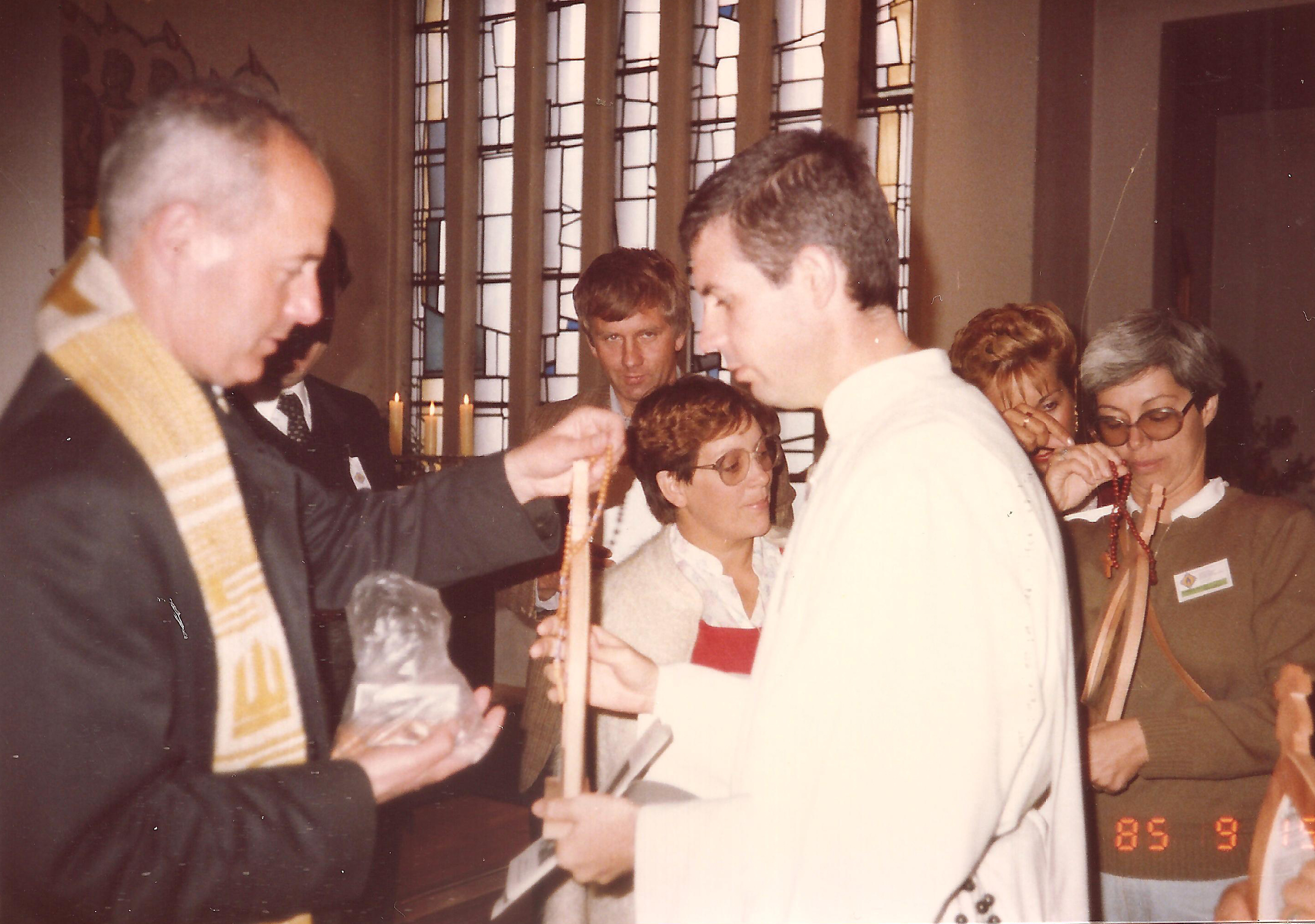 Photo: Commissioning of Pilgrim Mothers in 1985, in the chapel of House Marienau