Bishops from Haiti at Schoenstatt 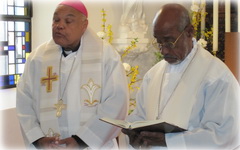 mkf. The archbishop of Cap-Haitien and President of the Haitian Episcopal Conference, Monsignor Louis KEBREAU, SDB, and the Apostolic Administrator of Port-au-Prince, Bishop Joseph LAFONTANT, made a brief visit to Schoenstatt on March 24th. This visit was within the context of a visit to the main offices of Ayuda a la Iglesia Necesitada (AIN) Help the Church in Need, an international Catholic organization that supports refugees and Christians who are persecuted for their faith in different countries around the world. 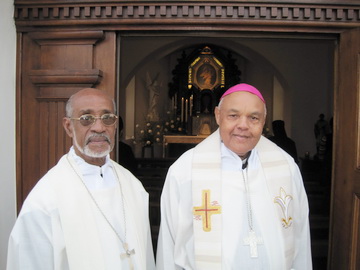 Xavier Legorreta A., Director of the Latin American Department of Help the Church in Need, accompanied them. They arrived at Schoenstatt, where Sister Maria Julia awaited them in order to give them a brief tour of Schoenstatt. The two bishops, who studied in Colombia and Chile, spoke Spanish perfectly. After a moment of prayer at the Original Shrine – where many prayers have been said for Haiti since the earthquake in January – they went to Mount Schoenstatt. They were at the Adoration Church, Father Kentenich’s tomb, and they asked many questions. In spite of not having much time to visit, they also visited Father Kentenich’s room at the Training House of the Sisters of Mary. 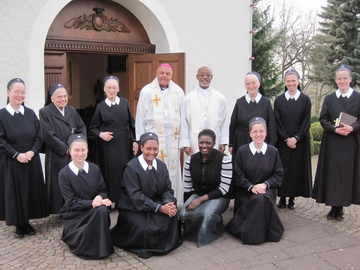 They expressed gratitude for having the grace to share in the Schoenstatt spirituality. Monsignor Serge Miot, the Archbishop of Port-au-Prince who died in the earthquake, was a great friend of Schoenstatt, and he had actively participated in the life of the small Schoenstatt Family in his country.