Father Kentenich will arrive in Rome…..”incredible!” 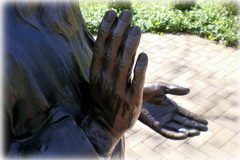 ROME, Fr. Rainer Birkenmaier. It happened a few days after September 15, 1965. We told our religion professor that Father Kentenich had returned to Rome from his exile in the USA. Shaking his head and murmuring to himself: incredible! incredible! incredible! Those giving him the news were some of us who were Schoenstatters who were studying the 12th course, and our religion and Hebrew professor was a priest who had slight contact with Schoenstatt. Even today I can see him before me, shaking his head: incredible! Incredible! 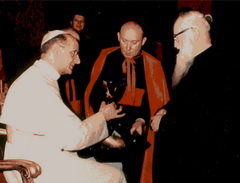 After fourteen years of exile, suddenly, without forewarning, “Father” arrived in Rome amid the final phase of the Council. It was at the exact moment: the Church needed him to fulfill what the Council had promulgated. Even today, it is very difficult for the Church to put into practice its post-conciliar mission. The hour for Father Kentenich’s charisma arrives.

From Milwaukee to Rome

In June of this year, exactly at the close of the Year for Priests, Father Kentenich will again arrive from Milwaukee to Rome. In this case, it will be by means of a very significant symbol: a bronze statue made in Milwaukee – the place where he lived out the fourteen years of his exile – and “will fly” to Rome to be placed at the International Center in Belmonte. In the shaping of this statue – whose author is Gwendolyn Gillen, a renowned North American artist – many Schoenstatt Sisters of Mary who for a long time lived closely to Father Kentenich participated. 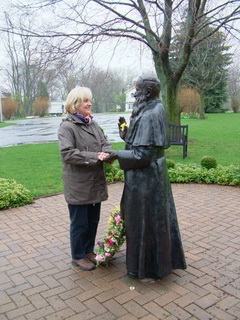 This statue, according to the experience, plays a very important part for the pilgrims from Milwaukee. It brings “Father” closer and creates a personal attachment to him.

The exile years (1951-1965) are regrettably, however, for many “the hidden years.” More than one fourth of the time which Father Kentenich dedicated to the foundation of his Work, he spent in exile! It is time which – like “the hidden treasure in the field” – this epoch in the history of the Schoenstatt Family is discovered as a special moment of grace and that it is offered to the Church.

Post-conciliar mission of the Church

On December 22, 1965, after the conclusion of the Council, Father Kentenich promised the Holy Father – Paul VI – that the entire Schoenstatt Family would commit itself to the realization of the post-conciliar mission of the Church. Since then, it has been 45 years and much has happened in the world and in the Church, but Father Kentenich is still however, in a certain way, “at the door.” Certainly today, Schoenstatt is no longer assailed, but Father Kentenich can still not always be presented with his charisma in the renewal and development of the Church as he had foreseen. In a certain way, is he still on the way from Milwaukee to Rome? Has the time come for the doors to be opened widely for him?

On December 8, 1965, the Second Vatican Council concluded in Rome. That day, with the laying of the symbolic cornerstone for the “Matri Ecclesiae” Shrine and the future International Center, Father Kentenich valiantly seized the impetus of the Council and with it connected the future way for Schoenstatt. With this act, he considered it as the end for the history of the Visitation and in consequence, the end of the time of exile. 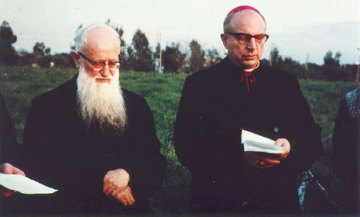 Forty five years have passed since the closing of the Council. A great deal of water has passed under the bridges of the Tiber and Rhine Rivers. Soon the Year for Priests will be concluded. It is a peculiar gift from Divine Providence that the Year for Priests proclaimed by the Church would fall directly before the 100th anniversary of Father Kentenich’s priestly ordination. The priests are in the middle of many tensions and changes in the Church. The statue will be placed in Rome on June 11, 2010, at the close of the Year for Priests. In this symbol, Father Kentenich presents himself to the priests of today as he has done throughout his long life. He can guide them and motivate them.

The Church celebrates the Year for Priests, the Schoenstatt Family prepares for the centennial anniversary of Father Kentenich’s ordination…..and precisely at this moment, a tempestuous storm hits. The key word: “abuses.” It is the best moment for Father Kentenich’s charisma. He was a great educator of priests and wanted to give to the Church a new type of priest: the prophetic priest who is especially an explorer and guide in the faith before he is an administrator or manager. Will he be able to educate priests “according to his mold” in the Church today?

A gift for the Church 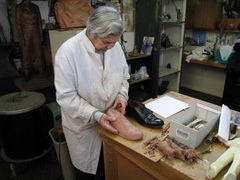 The Father statue is a gift from the Milwaukee pilgrims, the priests from the Schoenstatt Institute of Diocesan Priests, and from many Belmonte friends. It is a gift for Father Kentenich on his 100th anniversary as a priest, but it is also a gift for the Church. Our Father Kentenich is a gift which the Holy Spirit has made to the Church. This has to be made more public and it will become a patent for his canonization.

We accompany him on the way

At the beginning of the exile, a question was asked…..”do you come with me?” At that moment, the question was directed to Father Menningen who was considered as a representative of the entire Family. We could very well imagine that Father Kentenich on his way from Milwaukee to Rome, anew asks us the question: do you come with me? The trip of the statue from the USA to Rome – it is expected on Pentecost – should be understood symbolically. We are all invited to accompany that pilgrimage (schoenstatt.de will follow the way of the statue and will provide continuous information).

A reflection of the Father 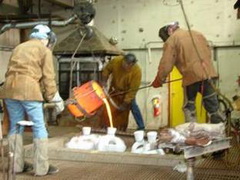 The statue was cast in Milwaukee a few days ago. As was done for centuries in Greece and Rome, a wax model was prepared which served as a mold for the bronze. It is the technique called “with lost wax.”

The casting of a statue like this one is a hard and demanding process.

The Schoenstatt Family, prays that the Blessed Mother, through the Covenant of Love, forms many priests into a reflection of the Father, and She will do this much better if many priests find a personal access to Father Kentenich and let themselves be guided by him.

If it was desired to show in a pantomime a typical gesture of Father Kentenich during the Milwaukee time, it would have to be the gesture of giving something lovingly. Father always gave. 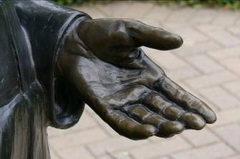 When the statue is erected at the close of the Year for Priests (June 11, 2010 at 5:30 PM), 250 Schoenstatt priests from throughout the world are expected. What will Father Kentenich give them? The Institute of Diocesan Priests had a good idea: Father Kentenich will give a cincture (belt, sash or insignia) to each priest as a sign of their commitment with Christ and with the Church and also as a sign of mutual attachment. The Institute Priests needs help with this. They invite each member or community of the Schoenstatt Family to offer as a gift an ample amount of cinctures (belts, sashes or insignias) so that Father Kentenich can amply give them out to the priests. This could be a beautiful sign of solidarity with the priests at the end of the Year for Priests!