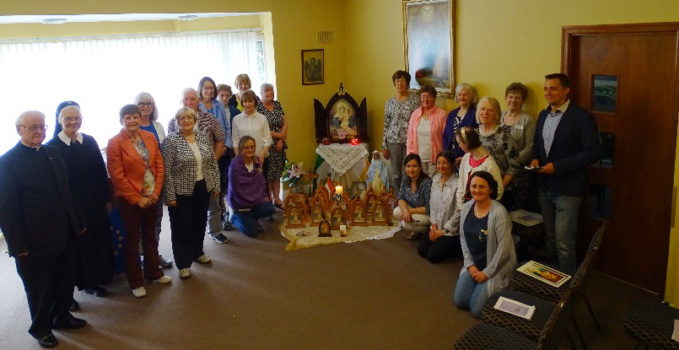 The Pilgrim Mother Auxiliary for Europe, which was crowned in Germany in 2012 began its first visit to Ireland since that crowning. It was collected from the Schoenstatt Sisters in Campsie Glen in Scotland on Saturday 12th of May.  The Pilgrim Mother arrived in Ireland with Sr. Margareta Bittner by car and ferry into Northern Ireland before proceeding southwards to Dublin, Ireland’s capital. —

Coincidentally, Pope Francis will also attend the World Meeting of Families in Dublin in August 2018.

“I know that Mary our Mother has not forgotten us here in Ireland. She came to remind us to continue trusting Her at all times.” Marie-Killaloe, Co. Tipperary
The pilgrim mother spent a few days in Dublin, before starting out on a 9-day road trip traveling through the southern parts of Ireland stopping in counties Cork, Limerick, Wexford, and Waterford, visiting the many Pilgrim Mother groups that are dotted over the southern part of Ireland.

The final destination for the Pilgrim Mother was The Pallottines Retreat Centre in Thurles, Co. Tipperary.  Sr. Margareta organised a weekend covering various topics and ending with a celebratory mass and crowning of all of the Pilgrim Mothers present at the weekend.

Twenty-four people attended the weekend and everyone brought their own Pilgrim Mothers to be crowned.

Saturday morning Holy Mass was celebrated with the Pallottine community and the general public, whereby we were warmly welcomed and the Fathers gave us their blessings for a successful, joyful and peaceful retreat.

During the weekend we learned more about Fr. Kentenich, Joao Pozzobon and we also listened to the 2007 EWTN interview of Sr. Jessica Swedzinski on the topic of the Pilgrim Mother and the Schoenstatt Rosary Campaign.

On the final day, Sr. Margareta gave us a talk on what it means to crown our MTA, and how we want to be living crowns for the MTA.  We then celebrated a final holy Mass with Fr. George Ranahan, rector of the Pallottine Retreat Centre. Fr. Ranahan then blessed each of the Pilgrim Mothers that were newly crowned and sent back out into the community to continue the work of bringing people together in prayer and transforming lives.

We would like to take this opportunity to thank our hosts at the Pallottines Retreat Centre, Fr. Ranahan, Brother Steve, all the catering staff and the Pallottine community.

Some comments from the participants at the weekend retreat

“I was most impressed with the weekend at the Pallottines Thurles where we welcomed the European Pilgrim Mother image.  And where each PMTA was crowned and blessed.  Everybody said the weekend was what they just needed now – time out from home and family.  We returned home renewed. We got time to renew friendships and meet new groups like the Polish group from Ennis and Clonmel who have joined the PMTA groups in recent years   We had lots of sharing celebration of Holy Mass, the rosary and singing hymns. We were so happy to have Sr Margareta visit us and I thank her for bringing the European Auxiliary to Ireland as part of the European visit.  I would like to thank Ann Marie for her organisational skills, the whole weekend was a huge success, so thank you Ann Marie”. –

“Thanks for a great weekend and visit.  One of the highlights was when the European Auxiliary visited my home during its travels around the southern part of Ireland.  The weekend was a great time-out for me on a spiritual level. Hearing Sr. Margareta’s talks on Fr. Kentenich and Joao Pozzobon and how their devotion to Our Lady showed much dedication.  It was great to hear that the Pilgrim Mother is working her way around Ireland.  This gave me great joy and hope for the future of Schoenstatt in Ireland.” – 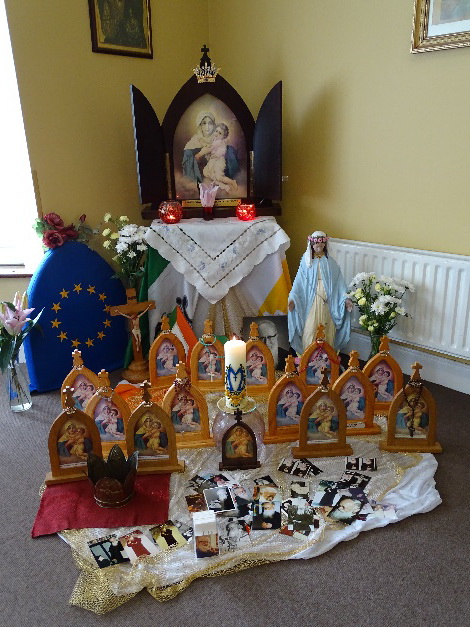