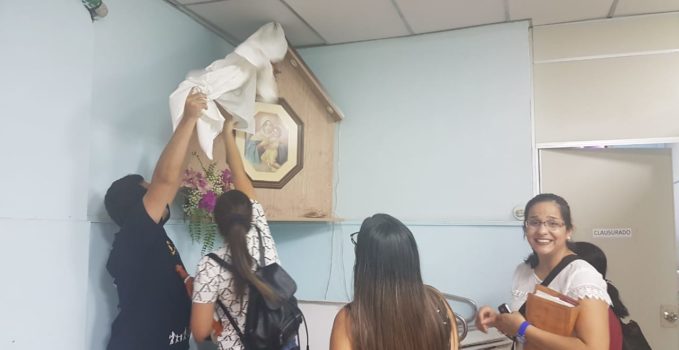 IPS 2019 Mission: Jesus is in each sick person and Mary visits them

On Saturday, March 2 we resumed our first mission of 2019 to IPS (Social Welfare Institute, public hospital, created “to protect the health of Paraguay’s salaried workers”). As usual, we went with a large group of very close friends, all of whom are also missionaries. Here are some of the stories of the people we visited with the Pilgrim Mother. —

As we entered the first room, room 359, the Blessed Mother had prepared a tremendous gift of love for me: there was Brunito, a boy who is well-known on social media in Paraguay for praying the Hail Mary. I had never been able to meet him to give him my my “little pilgrim  mother,” the Pilgrim Mother image for children at risk. Then I gave him the Pilgrim Mother image for health from a missionary who accompanied us in this mission. We prayed the Hail Mary together, and I told his mom that they weren’t alone, that Jesus and Mary visit them, and that is why the image is called the Pilgrim Mother, and today she used us. 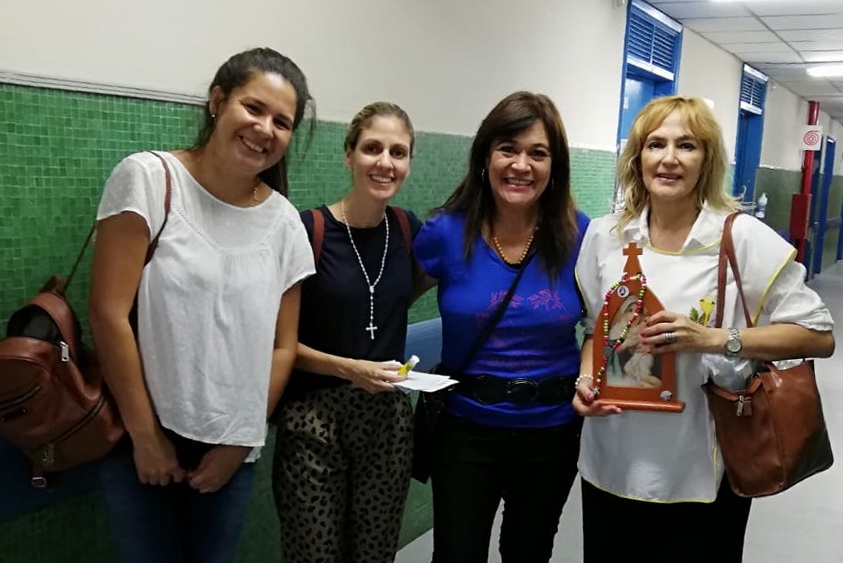 The same as you, but with different colored hair

Young girls suffering from cystic fibrosis were in the next two rooms. The first little girl, Thais, had fallen asleep before we arrived but her mom opened the door with a weary step and we prayed with her.

The second girl, Giselle, a fifteen-year old also suffering from cystic fibrosis, comes from the far end of Paraguay, Hernandarias, and we taught her how to pray the Rosary. I gave her the one I was wearing around my neck to encourage her to learn this devotion. She was glued to her phone until I showed her the Blessed Mother and her son Jesus, and I told her: “See, Jesus is the same as you, just his hair is a different color,” and she started to hug and kiss the Pilgrim Mother.

Because this image belongs to my friend and missionary Andrés, I told Giselle that she could keep Mary and Jesus for a little while. There were tears of joy in this room. Now, Andrés will be responsible for supporting this family.

As we were leaving, a lady named Teresita de Jesús insisted that we visit her baby, Bryan Alexander. 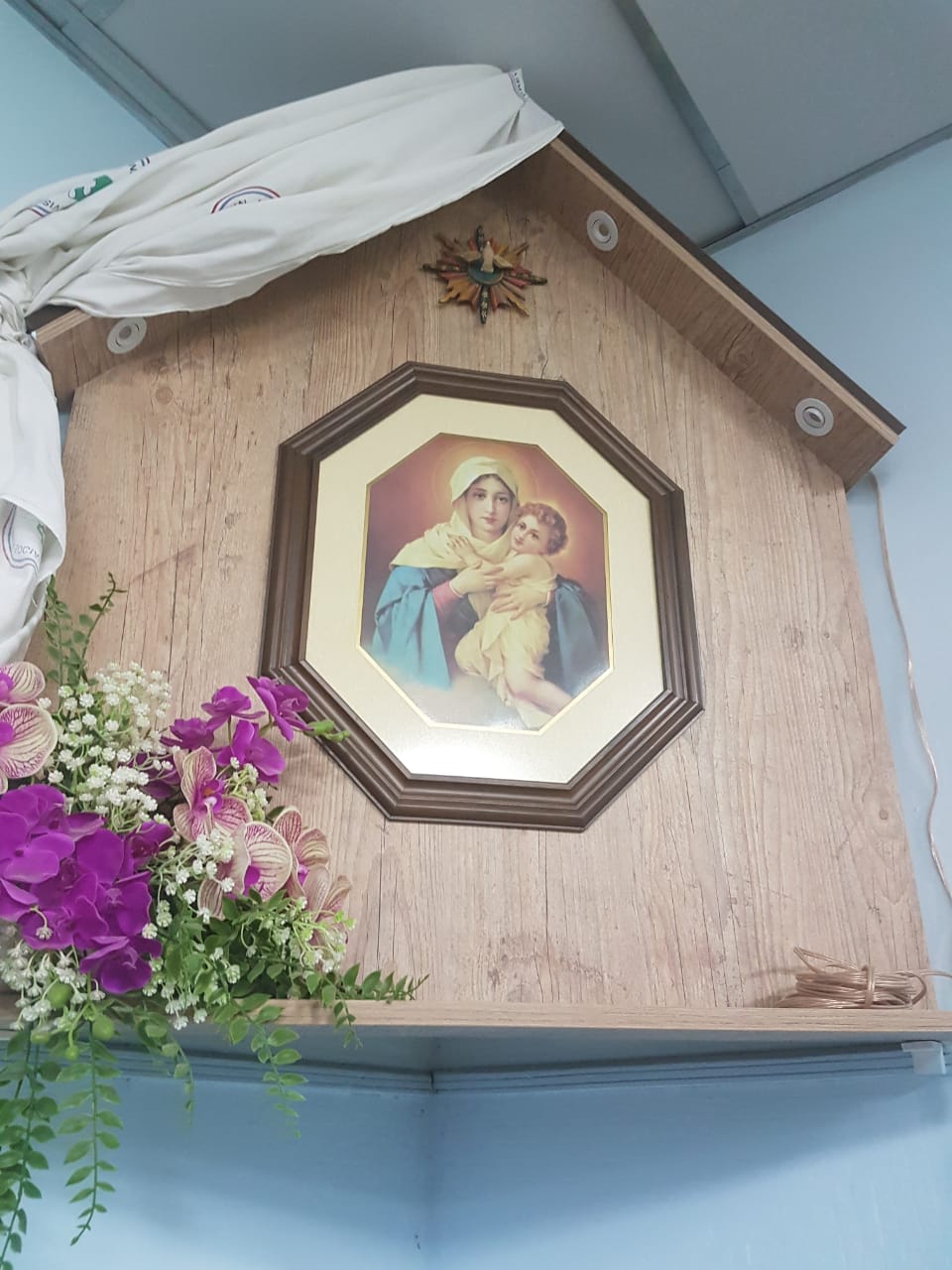 Why is the Pilgrim Mother image covered?

Finally, I told the missionaries that our last mission for the day was to find out why the Pilgrim Mother image in the nurses’ and doctors’ station was covered.

We went to the station, we asked them what had happened and we gave them rosaries and pictures of the Blessed Mother. They then told us that they had covered her to protect her from the dust of the renovations at the IPS and that we could uncover her.

And so we did, and it was an overflow of joy, faith, hope, like a banner of blessing for all who believe in her, so that those who still don’t know her and today saw how beautiful she is. 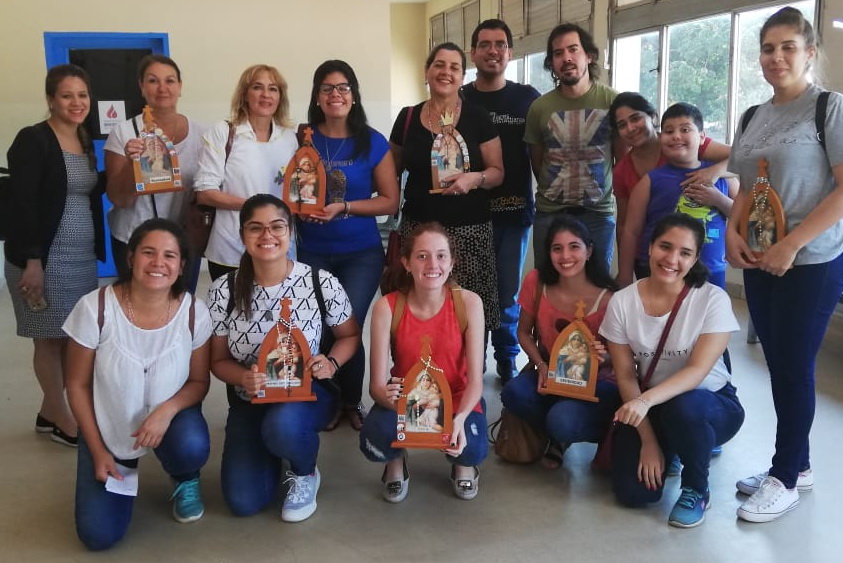 Mary asked me to give ALL

Finally, we went to the guesthouse where the patients’ families are accommodated and we found a very tired father. We told him that we are Schoenstatt Pilgrim Mother Campaign missionaries and we are there to let the patients know they are not alone. We asked Josias if he knew how to pray. He said no and that he came from San Pedro.

I took off the finger rosary I was wearing, which had been a first communion gift from my sister-in-law and I gave it to him, because Mary asked me to give EVERYTHING.

In the final rosary of the IPS mission, I had one last surprise: there was my friend Sol Mendieta, who is the mother of the twins Sofia and Victoria, who are now the Blessed Mother’s angels.

The whole mission can be summed up by the word Love: “there is more joy in giving than receiving,” a message from Jesus on this day, the first mission of the year.