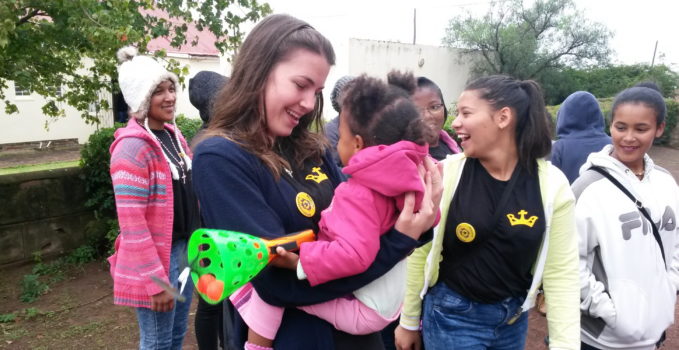 Covenant solidarity extends beyond the walls of Schoenstatt and the Church

When we tell our stories of covenant solidarity, we mostly mention our efforts to live our covenant of love by reaching out to others and going to the peripheries of our societies to share the graces of our covenant relationship.

It is good to tell these stories because each act of covenant solidarity helps our Mother and Queen to add “stone on stone in building up your Schoenstatt work” as we pray in our evening prayer. These stories also encourage others to leave their comfort zones and add their stone to the creation of a better world.

But sometimes, Mother reminds us of the need for humility. She reminds us that even though we have so much to give, we are also poor and have our limitations.  Like the beggar who stands on the corner asking for a morsel of bread, we sometimes find ourselves standing at the edge of the road, praying that by virtue of the ancient covenant that we share with all the People of God, we too may become recipients of this covenant solidarity that extends beyond the walls of Schoenstatt and the Church.

This was the experience of the Cape Town Schoenstatt Girls’ Youth and Women’s League during Holy Week.  Inspired by the Missiones carried out by the Schoenstatt Youth in South America, a group of 23 teenagers, students, and young professional women set out with Sr. Ann Marie Nicholas for the ‘Mother Shrine of Africa’ in Cathcart.  They travelled 1,000 km to fulfil their Lenten observances — prayer, fasting, and almsgiving — and to deepen the bonds of friendship. 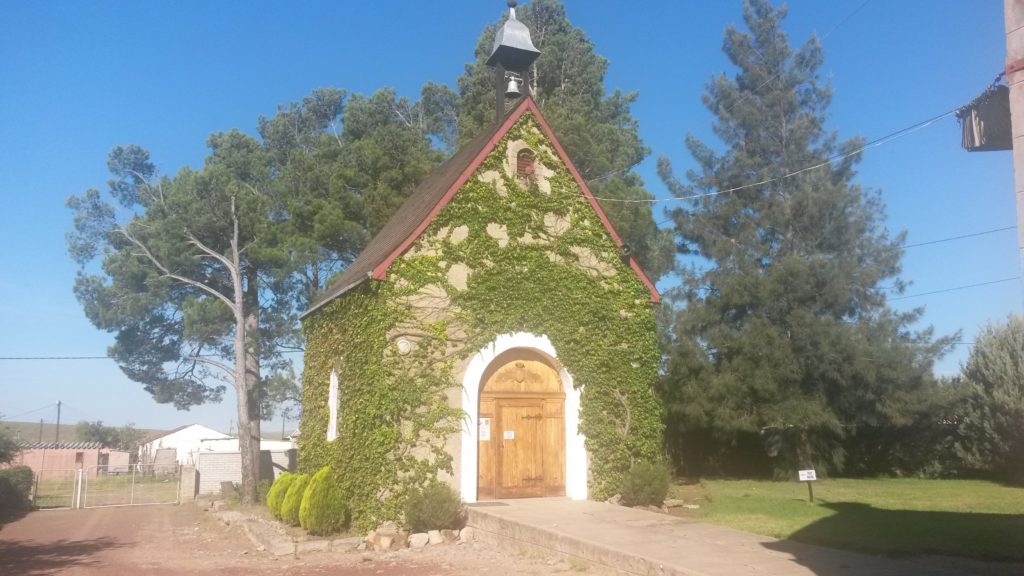 The solidarity of welcome

The first sign of covenant solidarity was the warm welcome from the small Catholic community in Cathcart. On Sunday morning, the pilgrims joined the Palm Sunday procession from the foot of the hill that sheltered the simple homes of the rural Xhosa-speaking community and walked up to the Church. By the end of the beautiful, joyous three-hour Mass, it felt as if they were part of the family.  Some of the mothers handed over their babies for the pilgrims to play with and hold, and everyone wanted to take photographs with the group. Jamie-Lee described this as the “absolute generosity” of the people.

After this first welcome, the townsfolk would stop to greet and chat to the girls as they walked in small groups through the small town centre, asking how the pilgrimage was going..  Other members of the community, including Jenny, a completely dedicated Schoenstatt member, made sure that we didn’t have to worry about buying supplies for our meals and cooking them.  Each night there was a delicious supper waiting for us and sandwiches for lunch the next day. 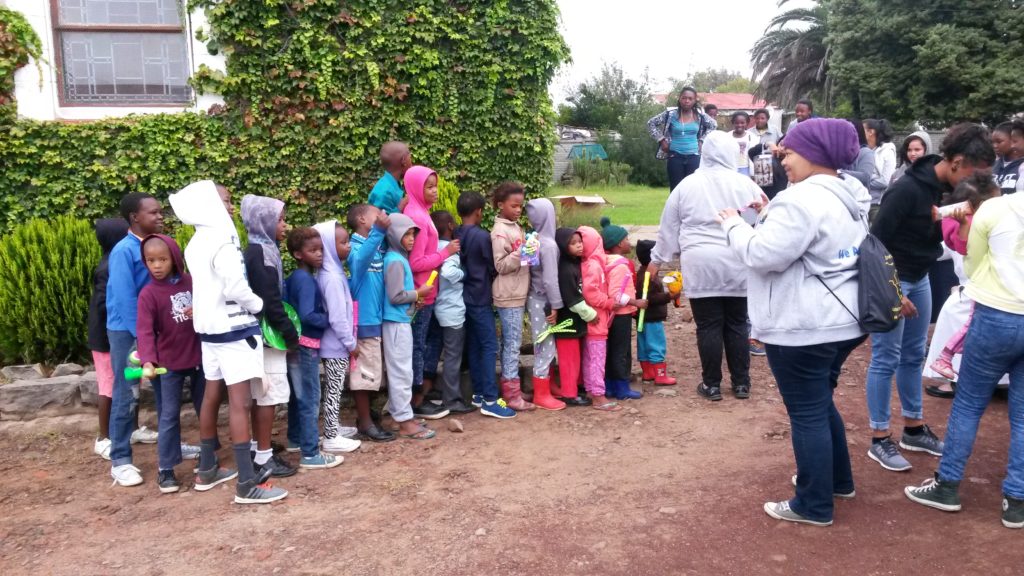 The solidarity of Christian unity

The outreach activities included delivering books to the poorly stocked local library and toys to the children who regularly get food from the local soup kitchen.  The bus driver Craig, who is also a Christian was also infected by the spirit of giving. Very soon, he became known as the Pied Piper and the small children would run to him every time they saw him, knowing that he had a supply of sweets for them.  Just like Fr. Kentenich when he visited Cathcart in 1948.

However, the main outreach activity was a fun day for the children of the community.  The group had planned games that encourage teamwork, children’s hymns, an introduction to the shrine and the meaning of Good Friday and Easter. The event was to be held in the empty field next to the shrine.  But as everyone woke up that morning, it was pouring with rain! What to do now?

Jenny and Sr. Ann Marie asked if they could use the town hall for the day, but the town hall was already occupied. They suggested another hall, but the local government was using that venue too.  Jenny went around to the other churches in the area to see if someone could help. Less than hour later, she was back. The Community Church had agreed to let Schoenstatt use their premises.

In a warm and dry space, the youth from Cape Town and the Cathcart youth enjoyed each other’s company, teaching each other games and songs.  They had just settled down to a final activity before lunch, when Jenny’s son and daughter-in-law who had come to visit their parents for Easter, came past to say hello.  Spontaneously they led a session how God has asked us to care for the world around us and each group had to come up with a practical activity on how protect the environment.

People from all walks of life came together to help prepare a day that the children of Cathcart will never forget! The pilgrims will also not forget this day. Lizzy said that what touched her most “as the kids when we gave them the toys,” and Jaden added that she loved seeing “the happy faces.”  Jamie-Lee expressed that “giving the children their toys and seeing their appreciation” is a memory that will stay with her.” Michaela said building relationships with people her age who live in completely different circumstances taught her that you “don’t need objects to make you happy.” 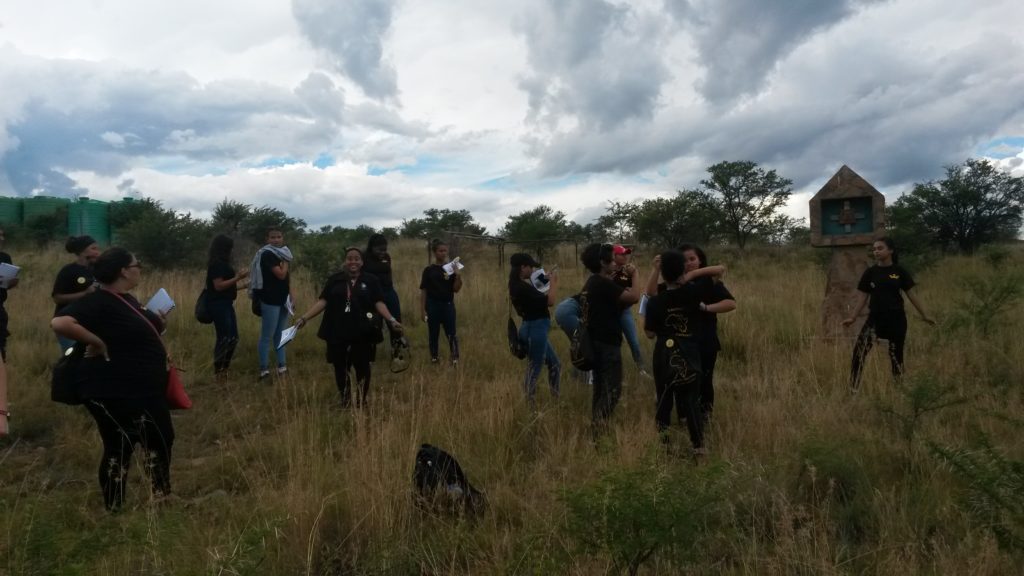 The solidarity of the Cross

The pilgrims also had the opportunity to walk with Jesus to Golgotha, by walking the Stations of the Cross up a small hillside. This prayer experience touched the pilgrims very deeply. Jessica said that the Stations of the Cross “made me feel like I was walking this journey with Jesus.” Janine said that the going up the mountain was “absolutely indescribable” because she felt that it was “so real” as if she were going with Jesus.

There were other little crosses the pilgrims had to carry during the week, such as sharing ablution facilities, missing some favourite foods, and for the older ones — overcoming pain and tiredness to stay up with the teenagers in order to share in their animated conversations, games and singing. 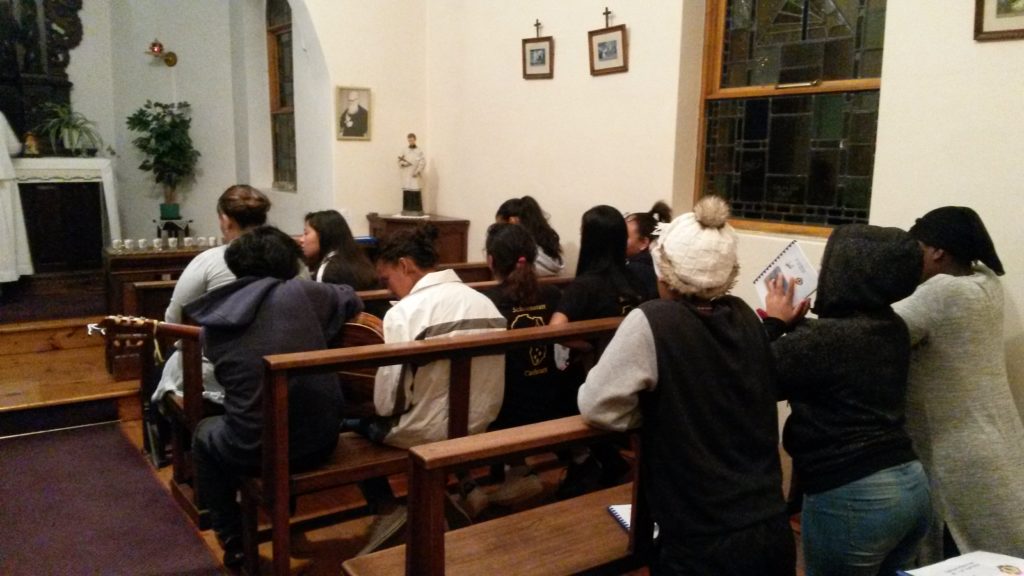 These contributions to the capital of grace were worth it because during this Holy Week two of the Girls’ Youth members decided to make their covenant of love in Africa’s first shrine. Four girls received their RTA crowns and promised to become “living crowns.” Simone said that coming on pilgrimage was the “best decision” she had made because making the covenant of love “felt as if I was going on the right path and bringing Mother into my life.”

Evadne commented on the commitment of the girls, saying that “you cannot help to be proud to witness the progress that these girls took to equip themselves as better Christians fired by their covenant of love with our MTA.” She added that this is a “fresh breeze of hope for the future of our country and the International Schoenstatt Family.” 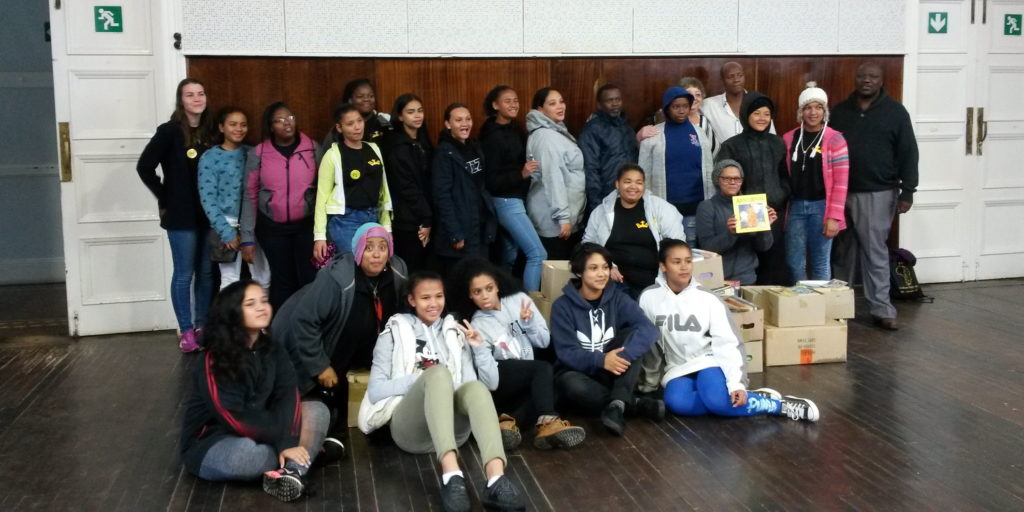 Throughout the entire week, the pilgrims felt Mother’s care for every detail of the journey.  But it was on the way home that they were truly able to say Mater Perfectum Habebit Curam — MPHC.

Three hours into the return journey, the driver noticed that the bus was leaking diesel.  As he stopped at the side of the road in front of a game lodge just before lunch, the pilgrims didn’t realize that at nightfall they would still be waiting on the side of a busy highway for the insurance company to send a replacement vehicle.

The adults started to worry that it would not be safe to stand on the side of the road after dark, given that South Africa is known for its high crime rates. The group had just finished praying the rosary, when the owners of the game lodge returned and agreed to let them wait inside their premises until help arrived.

Help arrived and his name was Witness.  He drove us to the nearest big town where the brother of one of the pilgrims, hearing that the group had been stranded, prepared a sumptuous dinner for everyone.  Hearing that the insurance company had only agreed to take the group halfway home, Witness announced that he would drive them all the way to Cape Town if his own company let him make the whole journey. This meant he would only make it back home late on Good Friday, and miss the start the Easter weekend with his own family.

It took many more hours, more rosaries and the prayers of the two Christian drivers to get the authorisation to drive back to Cape Town.  The pilgrims all missed the start of the Easter Tridium in their parishes, but they made it home before the long weekend.

Yes, Mother really took care of us all. Maxine commented that all the things that “went ‘wrong’ forced us to put our trust in the Lord and it was in these times that we experienced the power of the rosary…through this our faith was inspired and strengthened.”

The only question that remains to be answered is…when are we going again? 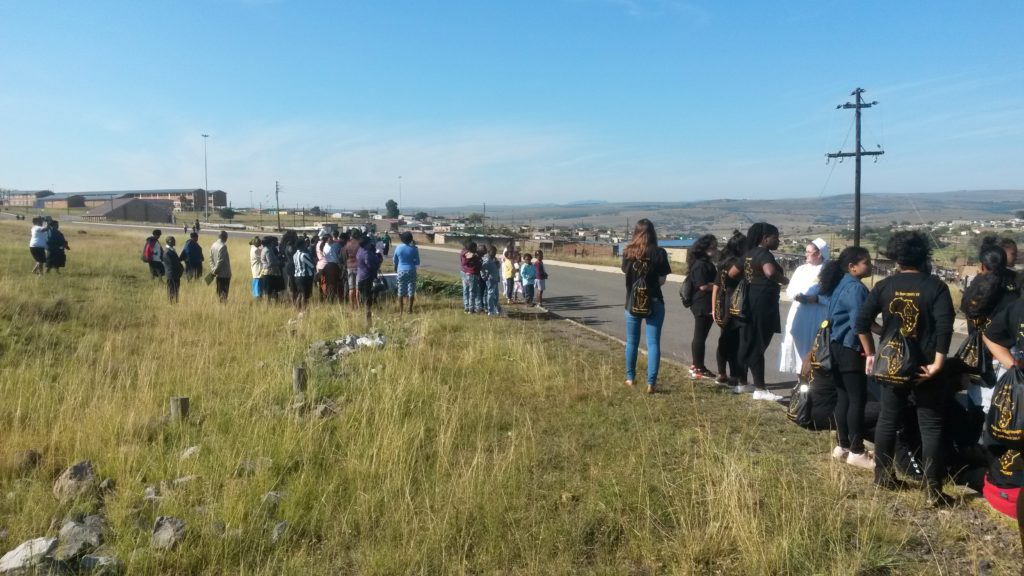