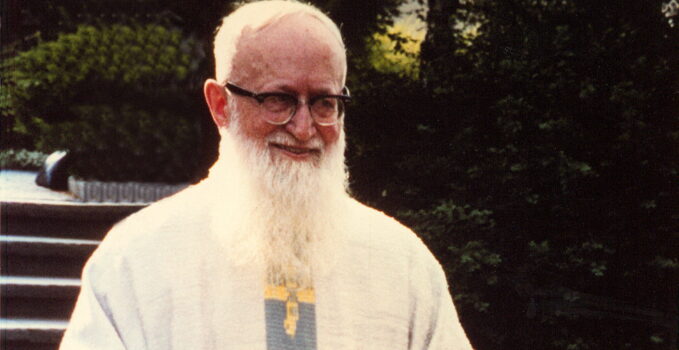 “I think a lot of objectivity will be demanded from us”, said Bishop Francisco Pistilli of Encarnación, giving a hint at this time. Today, July 2, 2020, the German newspaper “Die Tagespost”, a traditional Catholic medium, published a note written by historian Alexandra von Teuffenbach, Rome, on documents from the Vatican files from the time of Pius XII, which since March have been available to everyone in the context of Pope Francis’ initiative for greater transparency in the church. These documents contain writings of the visitors Stein and Tromp to the Institute of the Sisters of Mary, and several extensive letters from the Sisters of Mary to the visitors and other Vatican authorities, with accusations made by the Sisters of Mary to Father Kentenich, for abuse of conscience and power, and in one case, sexual abuse. —

Yesterday a “pre-information note” was published in  some German and Roman media (by Sandro Magister, whom the author had contacted some time ago) as well as in Religión Digital and ACIprensa (in Spanish), and today the note itself was published.  What the note communicates is the visitator’s view, from his knowledge, position and obligation to investigate these accusations and doubts about Father Kentenich’s conduct in terms of authority, power, influence and freedom of conscience.  The author makes this her own view, contrasting it with the biography of Father Kentenich on the official page of the cause and on Wikipedia. Those accusations that had weight in the visitation itself, as well as in the decision to separate Father Kentenich from the Sisters and later from the Schoenstatt Work, have been known since then (1950), both outside of Schoenstatt as well as within (although not beyond certain circles), and were, as the declaration of the General Presidency says, part of the investigations in the process of beatification of Father Kentenich (1975).

So, what’s next?  Be encouraged into the light

“I believe that great objectivity will be demanded from us. In some way, our founder is being tested. We trust that he will pass the test, but he must be able to show himself in this way, with impartiality. I am convinced that it is not a question of being on the defensive side, but of being encouraged into the light. It can be painful, it surely will be. Questions will come up, perhaps from ourselves. It is time to understand and seek answers without fear and without the need to draw a perfect founder.

His holiness, if the Church confirms this, will not be because he was the one who always had all the answers and never risked going beyond the conventional.

We call him a prophet; let us confront him with the fate of the prophet, once again. There are difficult areas. How to judge, how to enlighten? There is a challenge there.  Abuse of power is a developed theme, perhaps from the time of the exile. The church itself did not fully understand it. For Father Pio it was a question in his process. He passed the test. Trying to cool down the fire is not always the best option. Especially in times like these. Speaking without knowledge is not good either. How much do we really know? Can we go deeper into what it all means?  Without veils, but with objectivity. I like to think we can. God is light and those who follow him need to be seen through his light.”

“Let’s not react from the trenches. They’re down there and they’re very dark. We need light,” a comment from Prof. Ignacio Serrano del Pozo, Chile, in an exchange between Chilean Schoenstatters last night.

Not to take it only as an attack and to go on the defensive. But from the: and now, what?

Many others say that we live in an era where transparency has a much greater weight than before, and that hopefully this hard blow will help to carry forward a process towards more transparency within Schoenstatt. Concealment does not benefit anyone, least of all Father Kentenich. The truth makes us free.

“I think it is important that within Schoenstatt we now inform and document very proactively, so that things can be explained, or refuted, or be put into perspective. The statement of the General Presidency is absolutely correct as a first step. In any case, the parts of history that are perhaps still missing or should be better explained must be actively informed and processed,” Ulrich Grauert, Switzerland, demands, just to quote one voice in this matter.

Bettina Betzner, Germany, cited last night, in this context, the Pope Francis‘ sermon on June 29, where he calls us to unity and prophecy. Less to blame “the world” for what happens to us or to look for “guilty enemies” in our own ranks, and more to allow ourselves to be provoked by the Lord, to be faithful witnesses of the one in whom we trust, with concrete deeds.

Translation of the Tagespost article