“The 50th anniversary of the founding of the Joseph Kentenich Institute is approaching. The great annual meeting and the planned congress have fallen victim to the Corona Pandemic.  From July 6 – 8, we want to celebrate it here in Oberkirch at the actual site of the event in a small circle. I would like very much that the initiative for the work of our father does not disappear completely within the corona pandemic. Could you help us?” wrote Dr. Peter Wolf to the editors of schoenstatt.org. When it is about Father Kentenich and the deeper penetration of his thinking, we are happy to help – and asked founding member Dr. Peter Wolf about the Joseph Kentenich Institute, its origin, its work and its relevance for Schoenstatt and the future beyond today. —

The Joseph Kentenich Institute (JKI) grew out of an initiative of members of the Schoenstatt Institute diocesan priests. Their aim was to bring the concerns of the founder of the Schoenstatt Movement, Father Joseph Kentenich (1885-1968), out of the experiences of their theological studies, into discussions with current results of the theological, pedagogical, psychological and social sciences and to confront them with current problems in the Church and society.  The goal of the JKI is thus a deeper scientific penetration of Joseph Kentenich’s approach and the introduction of his concerns into today’s science. We learn from the beautifully designed homepage of the JKI (www.j-k-i.de), which offers a number of real treasures, including an online version of the Schoenstatt Dictionary and an online version of the Kentenich Reader in German and English.

Mons. Dr. Wolf, what was the beginning of the Josef Kentenich Institute? 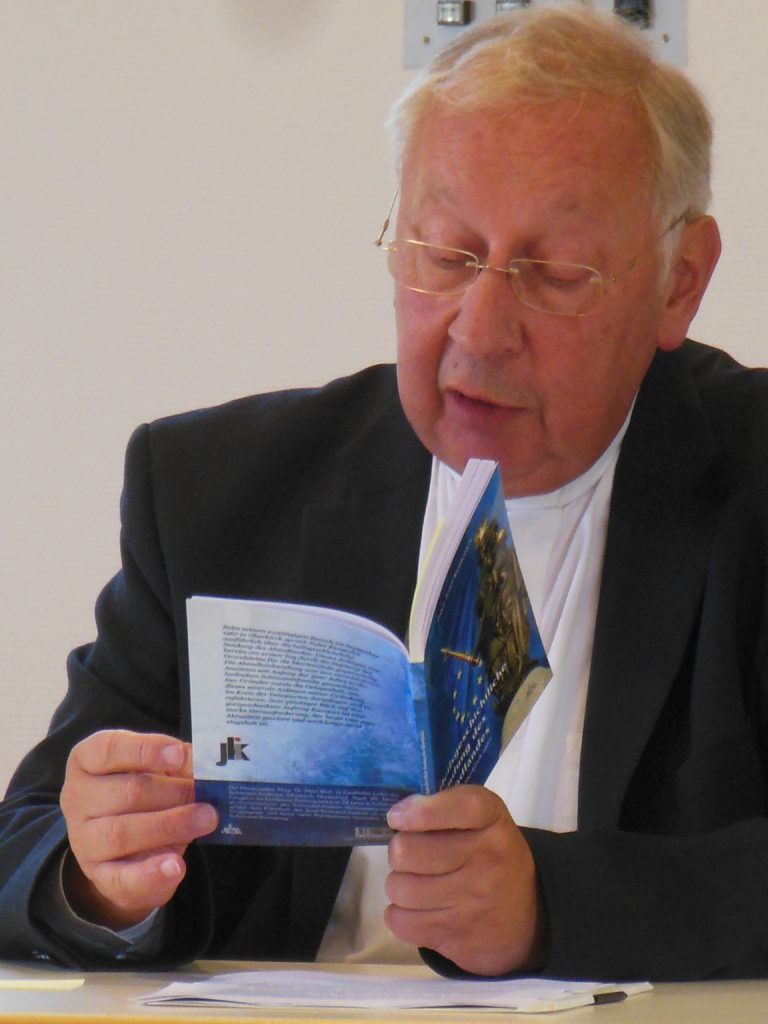 “The date of incorporation was to be July 8, 1970. We chose the Marienfried Schoenstatt Center in Oberkirch, where the founder had visited the Schoenstatt Movement of the Archdiocese of Freiburg three years earlier. We met in the conference room of the then new Father Kentenich House. I was to give the keynote address about the foundation. The title was: The charism of Father Joseph Kentenich in his claim to theology. In the founding lecture, the Joseph Kentenich Institute was presented as an anniversary gift on the 60th anniversary of the priestly ordination of the founder, which he had long desired.”

What was the intention behind the foundation back then?

“Above all, we saw before us the task of taking up what Father Kentenich said in the theology of his time, understanding it, and then to open it up and translate it in confrontation with the newer theological trends. We were aware that such a reflection and translation must be carried out by people who are profoundly attached to the Founder and who are in the life cycle current of his Movement.

Already in the first years, the circle of JKI members expanded beyond the priests’ association, as provided for in the statutes at its foundation. Remarkable additions in the first years were Fr. Paul Vautier from Switzerland and Fr. Günther M. Boll from the circle of the Schoenstatt Fathers. At that time, the latter was already considered an excellent connoisseur of the founder in the Movement. After the death of the founder, he had begun to publish important texts and as a member of the editorial staff of the international magazine REGNUM, he was an important contact for the JKI into leading circles of the Movement. In the winter semester 1973/74 P. Lothar Penners, who was working on a dissertation with Prof. Klaus Hemmerle at the University of Freiburg, joined the JKI in the winter semester 1973/74. Since 1974 Mrs. Gertrud Pollak, who at that time studied the German language and literature and theology at the University of Freiburg and later received her doctorate with a dissertation on the Secular Institutes under Prof. Karl Lehmann, has been working with the JKI. We experienced such additions as encouragement and confirmation for our chosen path.

How did you start working back then? Is there such a thing as a “first work”?

“The first task we set ourselves as a newly founded Institute was to revise the results of the Mariological Seminary and to publish them as a book with which we wanted to “introduce ourselves” in our own community and in Schoenstatt. As a title, we decided on “Mary, the new man in Christ”. The publication in book form was in the hands of Karl-Heinz Mengedodt, the first president of the JKI. He was also the one who found an affordable student-run printing shop in the old town of Freiburg, near the restaurant “Wolfshoehle”. Posters of barely clothed ladies hung everywhere in the underground rooms of the printing house. We sensed that the surroundings did not really fit our book and our theme. I remember that I practically apologized to the Blessed Mother with the words: “MTA, close your eyes! We had three hundred copies printed. Each of our first members of the JKI was to receive one copy. In our own community and in Schoenstatt we offered it at cost price (5 DM). I recall, in addition to concerned and critical questions (including a summons to Marienau), many positive and grateful echoes, especially from the circle of interested confreres in the Priestly Federation”.

In the 50 years of its existence, the JKI has published numerous other books and writings and has organized further education courses and study conferences. Is there a special milestone?

At the beginning of the 90s, the idea was born to advertise a prize and thus to stimulate forces beyond the circle of the JKI to study Kentenich. It was in a conversation between Dr. Gertrud Pollak and myself about the question of how we could interest and encourage students to become more involved with Kentenich and Schoenstatt in their studies. In Freiburg, theologians have repeatedly received awards for their final papers on Silesian Church history. We wanted something like this for our JKI and soon we designed a brochure with the concrete conditions and with prize money of 500 DM. The new prize was gladly taken up and already in 1994 we could honour the first prize winner. By 2019, there will be 22 JKI prize winners, nine of whom are female authors and 13 male authors.

The prize has helped to make our Institute better known among the Schoenstatt youth, but it has not brought us the hoped-for increase in new strength for the JKI.

The courses for spiritual accompaniment are also known beyond the Schoenstatt Movement. What is special about them?

At stimulating pastoral conferences in the early 1980s, in which speakers from the JKI also took part, the topic of spiritual accompaniment came up. The topic had become more and more urgent and was to be taken up with the risk of a “Basic Course for Spiritual Accompaniment” by the JKI. This was the important step towards a new experience of our institute by offering training courses. The first basic course was under the direction of Fr. Peter Locher and started in 1986. The publication of the book: Way-accompaniment: Spiritual guidance to mature Christianity (Weg-Begleitung: Geistliche Führung zu mündigem Christsein), ed. Karl Heinz Mengedodt, Vallendar 1987, coincided with the start of the course offerings for spiritual accompaniment. It wanted to show the way in which we wanted these JKI offerings to be understood.

In the courses for the training of Spiritual Advisers, in addition to the standards that are provided for these training courses, the work with the respective new knowledge in the areas of psychology, conversation, theology, anthropology and pedagogy has always developed. In the spirit of Joseph Kentenich, the courses always focus on the personal processes and the process-oriented working methods of the groups. In each of the sub-areas, it was important for the JKI to work with course tutors who had they themselves qualified accordingly through further training or studies.

The training courses for Spiritual Attendants have made the JKI known far beyond Schoenstatt and have brought the Institute attention and recognition in the field of spiritual accompaniment training.

Many thanks, Dr. Wolf, for the interesting insights into the JKI. I hope that it will become even more widely known. What you and the other participants of the celebration in a small circle imagine for the future of the JKI, we hope to hear from you afterwards!

Internet presence of the JKI