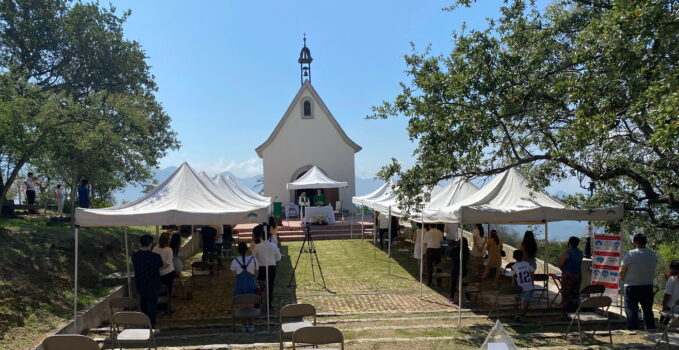 Posted On 2020-07-13 In Covenant Life, Covenant Solidarity in Times of Coronavirus

It has been 15 Sundays, 105 days, since the last Mass was celebrated in the “María, Camino al Cielo” Shrine in Monterrey, Mexico. In the meantime, technology has been very helpful, since we have been in contact with the priests and the community through video calls and the transmission of the Masses and rosaries from the Schoenstatt house, but nothing substitutes receiving the graces of the Shrine in person, especially the grace of home. That is why the Mass on Sunday, June 21, 2020 was so important and touching. —

It was not an easy task to resume the face-to-face masses after the federal government announced the “National Healthy Distance Campaign” on March 16. Now, little by little, the confinement is beginning to be relaxed and the State of Nuevo Leon allowed, as of June 20, the face-to-face masses, but with many requirements and limitations. 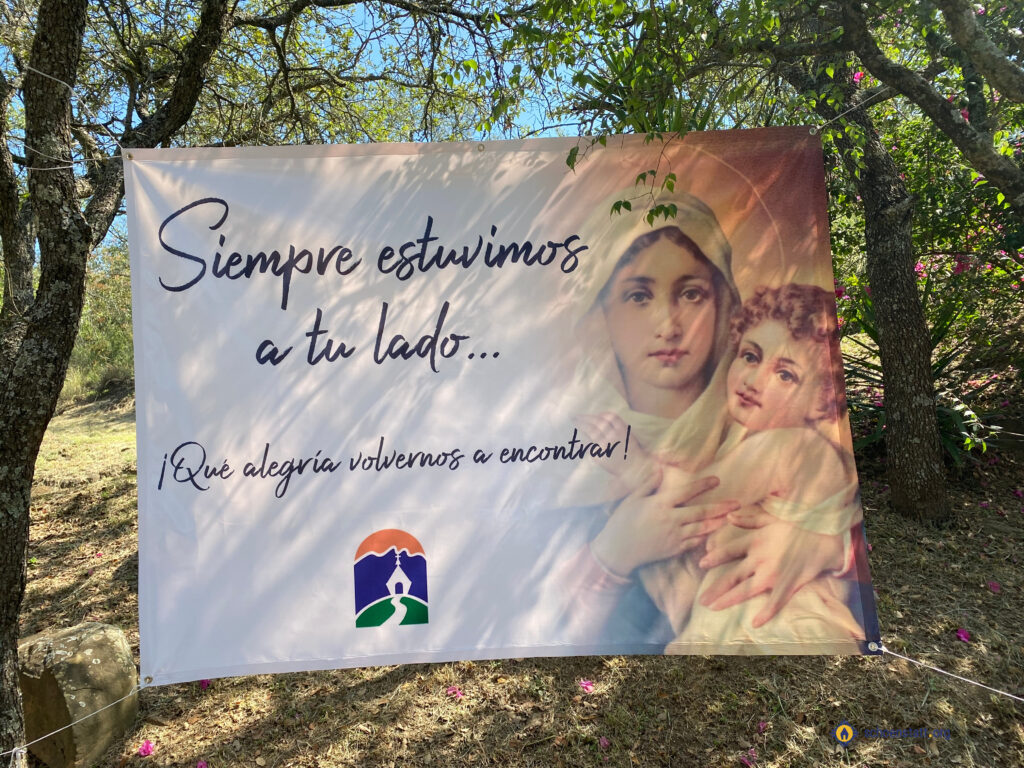 Following all the protocols and precautions

Clarita, from the Mass organizing committee, said: “I felt a little nervous that all the protocols of the Secretary of Health were fulfilled, since in order to start as ministers we had to take a two-hour online course and obtain a certificate, but thank God everyone was very orderly.

Space was limited to 50 people; a strict electronic reservation system was used and body temperature was verified at the entrance. The spaces between seats were as prescribed by protocol and the “healthy distance” of one and a half meters to take communion (in your hand, of course, not in your mouth), without neglecting the use of antibacterial, among many other precautions. 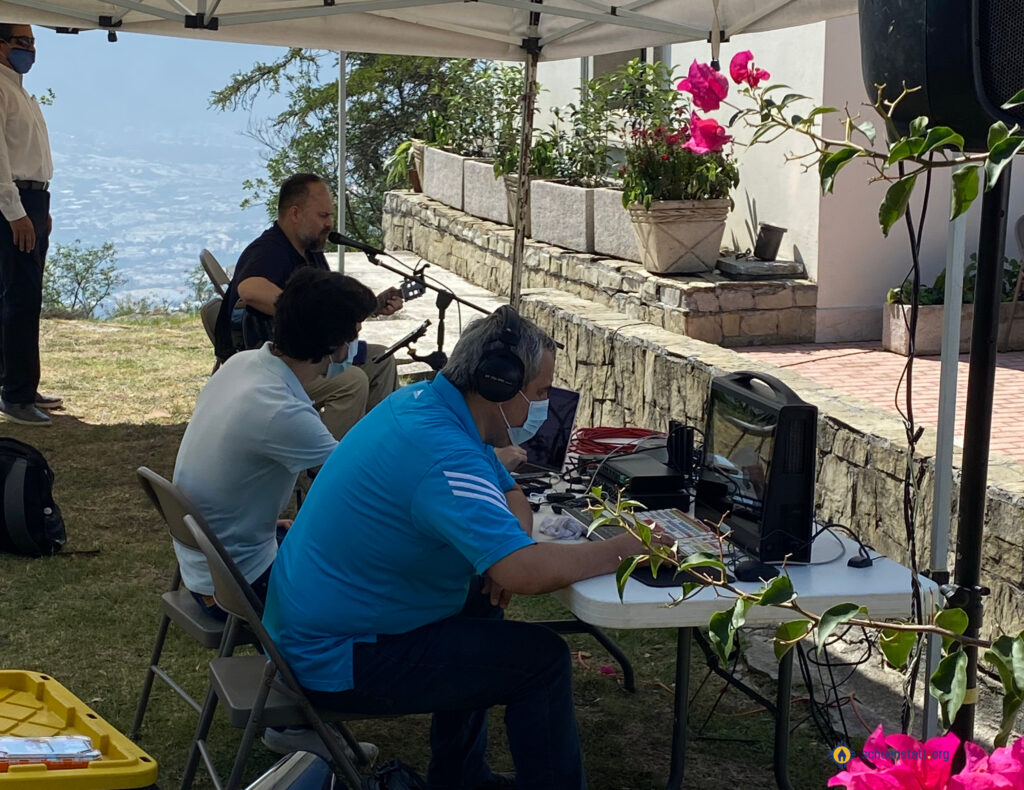 Certainly it was a different Mass from the ones we are used to in the shrine, which is usually warmth and reflects the strong bonds we share. This is how Jorge expresses it: “On one hand, I felt joyful to be in the Shrine, to receive the Eucharist and to see my Schoenstatt siblings, but the atmosphere was cold, there were few people and we missed seeing and hearing children running, talking and crying, seeing the elderly, the people who initiated Schoenstatt in Monterrey”. In spite of the restrictions and control measures that were taken, the general feeling was one of joy and reunion. Ricardo says: “After almost four months of not coming to the Shrine, I feel at home again, as a family and with my family, with a peace and spiritual tranquility that I had not felt in a long time”.  His wife, Rosalba, confirms: “I felt very happy and excited because I came back home to see the Blessed Mother and I received the holy communion again”.

Fathers Guillermo Múzquiz and Carlos Padilla co-celebrated the Mass, which was also transmitted live on Zoom and YouTube, while Father Andrés Espinoza administered the sacrament of reconciliation, which was so missed during the time of confinement. This resumption of the Masses in person coincided with the celebration of Father’s Day, and Father Carlos, in his homily, spoke about the importance of trusting the Father, especially when we feel fearful of an unknown threat that can affect our health, work, economy, and undoubtedly our lives and the lives of our loved ones. 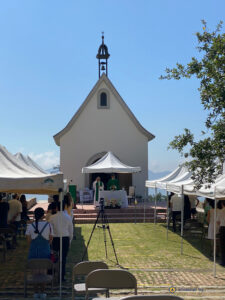 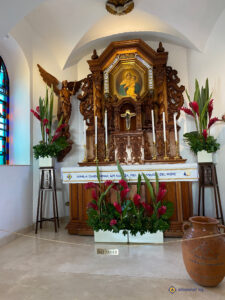 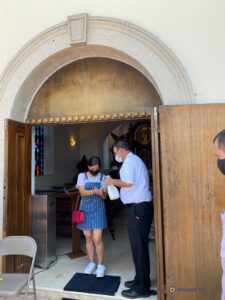 The long-desired moment of the Eucharist

The highlight, of course, was the Eucharist. The irreplaceable emotion of receiving Christ in the Blessed Sacrament was enormous, as confirmed by the testimonies of those present. Clarita commented again: “I cannot explain to you the joy of being able to receive Communion again sacramentally”. Daniella says: “Having been a minister of the Eucharist made me closer to the ceremony. I am with a full heart, excited, happy”. Jimena, who helped Daniella administer the Eucharist, says: “I was moved to see the people on the verge of tears when they received Communion!

When the Mass was over, everyone wanted to visit the shrine to greet the Blessed Mother and this was done under strict control, distancing and disinfection. A few minutes with our Queen and Mother recharged our souls and gave us the strength to continue fighting the battle against this pandemic. Edgar summarizes what many of us talked about with the Blessed Mother during these moments alone with her: “To enter the Shrine and to meet the Blessed Mother was a very significant moment, since I could thank her for everything that she has taken care of and protected during this pandemic, as well as to pray for the people who unfortunately have become ill or have died”.

We can summarize the prevailing feeling among those present with the words of Marimar: “I felt nostalgia and emotion when I received Communion, when I entered the Shrine, and I knew that the Blessed Mother has always been with us”. 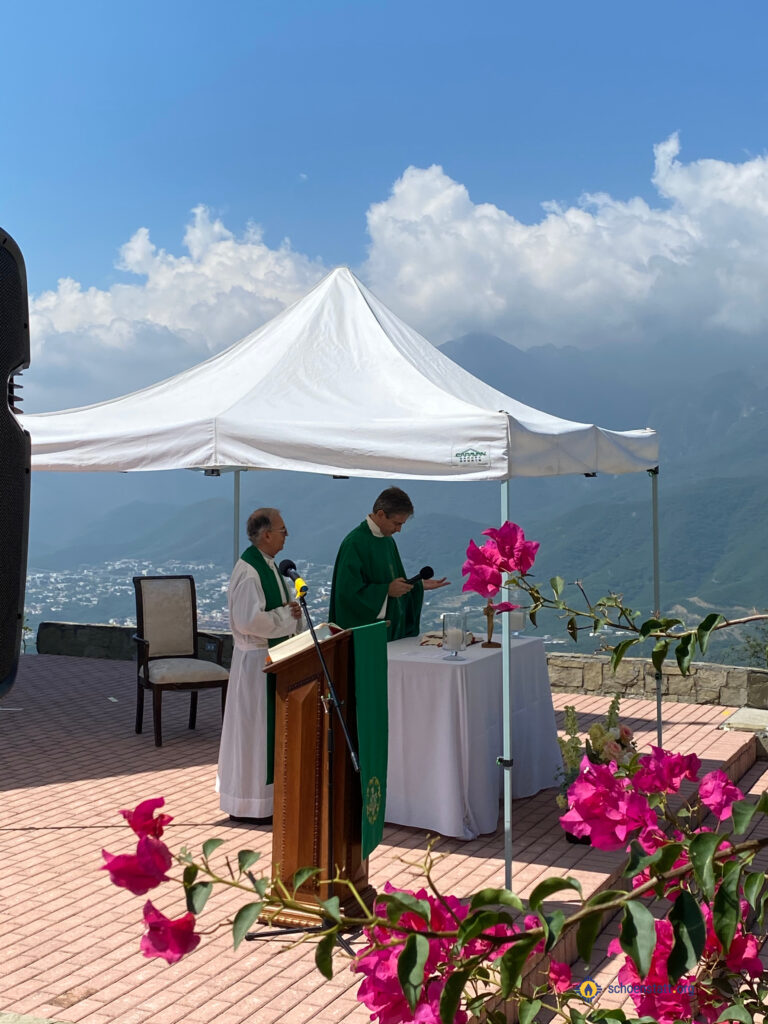