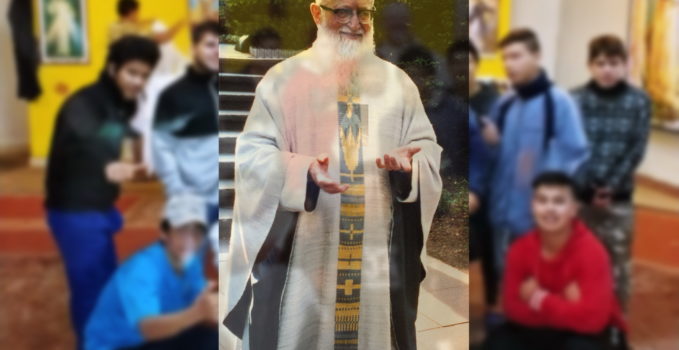 Posted On 2019-05-08 In Kentenich, Mother of Tuparenda House, Prison ministry

Fr. Kentenich’s Pedagogy on the Peripheries (3)

Is freedom in jail possible?  “Yes,” said Father Kentenich.  And he proved it.  “Yes,” says Fr. Pedro Kuhlcke, and he is proving it: at a jail for minors in Itauguá, a few kilometers from the Tupãrenda Shrine.  Perhaps the most daring question we already asked a few months ago from schoenstatt.org:  Is Kentenich pedagogy on the peripheries possible?  Yes, he answered, and he is proving it in this jail for minors, in this third part of his reflection in relation to the pedagogy of ideals.  If it is possible on these peripheries, it should be also possible on others— and within Schoenstatt.—

I think that part is somewhat more known by you.  Pedagogy of ideals:  what does that mean?  For Father, what was most important is the personal ideal.  Would you like one of the various personal ideal definitions Father gives us?  Hold on to your hat— take good notes because it is super complicated.

“I must now add, of course in an Aristotelian sense and in our sense: The original idea he (God) had of me and of my task, and on which he based my natural disposition, my natural and supernatural predisposition. That at the same time the milieu was important, my surroundings, for example the way, the place and how I grew up, my superiors, etc., need briefly to be recalled here.” [1]

Is everything clear?  What is the personal ideal?  It is the original idea God has had of my person and of my task.  Translation:  when God created me, HE had a beautiful dream – God has a beautiful dream for each one of us, and a different dream for each one of us!  We are not cookie cutter figures; we are not little soldiers marching in lockstep.  Each person is original, unique; none of us exists by accident, nobody just “pops up” in the world.  God has a marvelous dream for each of us – unfortunately, many people have no idea what that dream is.  And they spend their lives getting drunk, in order to not say something worse.

That is pedagogy of ideals.  Did you see that it is not so complicated?  Of course, Father adds much more:  he speaks of the original idea God has had of me, of my task… What is my mission?  And how do I discover it?  The basis for that dream, says Father Kentenich, God deposited them in my natural temperament, in my gifts, in my talents.  Did you see that in the Boys’ Youth we work on the test of temperaments and on a lot of other things to find the personal ideal?  If God has a dream for me, then HE gives me the tools to discover it and to fulfill it.

Can we speak about ideals in jail?  I personally would say that it is what is most important. It is the most important thing we must talk about.  In jail, I encounter many youths who tell me: “Father, my life has no meaning, in reality, I don’t know why I exist?”  For example, one told me: “My mother abandoned me when I was three years old and went to live with another man, I don’t even know my father.  I stayed with my grandmother, but she died when I was eight years old, and then I was alone in the world.  Nobody knows I exist; nobody is interested in me; my life has no meaning.”  Facing those pits of loneliness and no meaning, it is shocking to say: “No, you are not in the world by accident, your life does have meaning, God wanted you to exist!  Perhaps your mother did not want you to exist, perhaps your father never cared about you, but God did almost the impossible for you to exist because HE loves you very much.”

Sometimes I tell them about Father Kentenich’s childhood.  Did you know that the Father Kentenich’s father never acknowledged him; he always rejected him?  His mother was a domestic worker and could not keep him with her.  He grew up with his grandparents; he was a grandmother’s boy [2].  But in time, the grandparents grew old and could no longer take care of him.  His mother had a job with no living accommodations, and she could not take her son along.  When Joseph Kentenich was eight years old, his mother – with a heavy heart – had to take him to an orphanage.  Horrible!  Several times he escaped from the orphanage – due to his desire for freedom, and because living conditions were terrible there – and the police would return him back to the orphanage.  Father did not have an easy life!  But he discovered that God loved him and that HE gave him a Heavenly Mother. 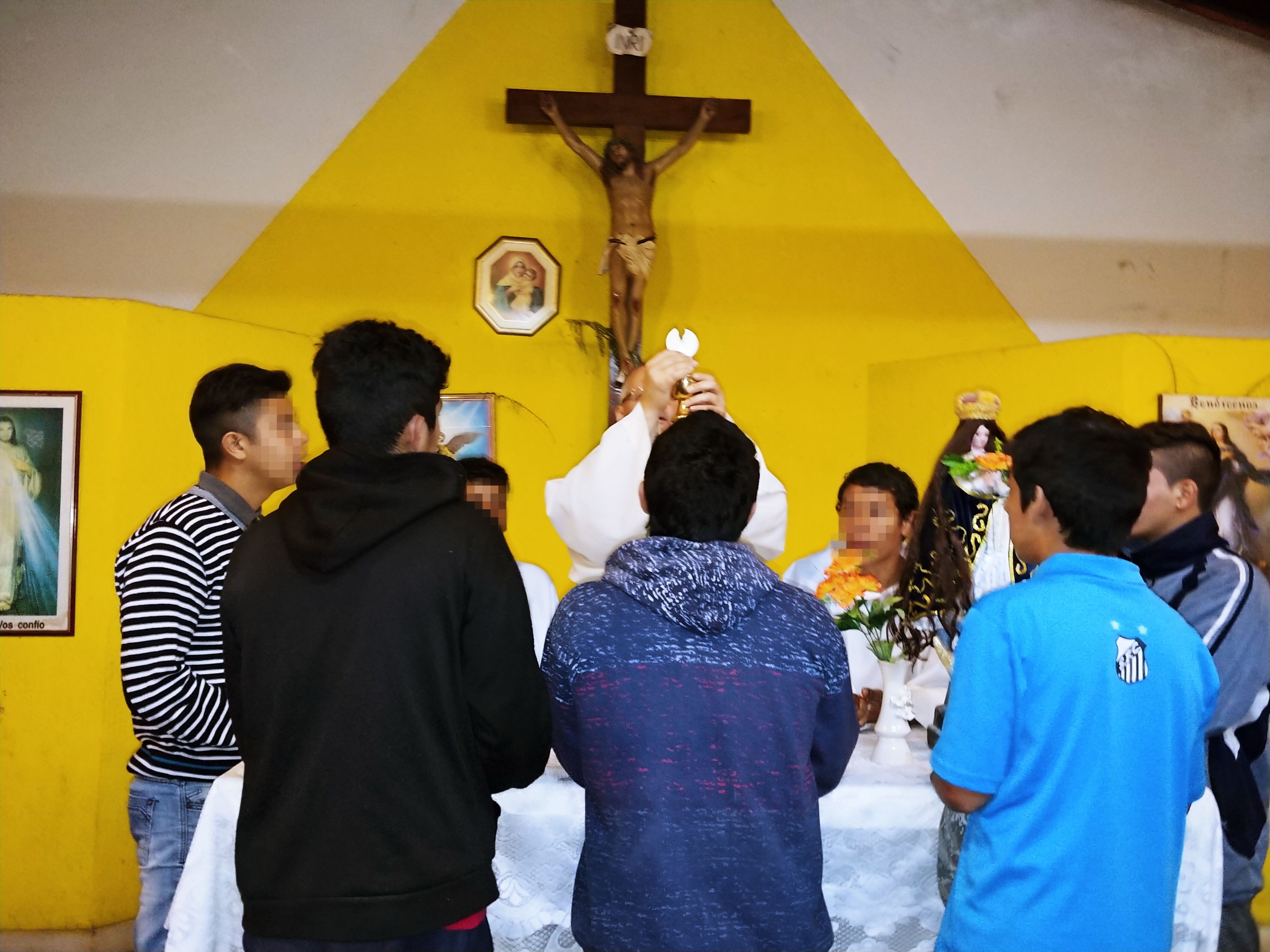 When I talk to the boys in jail, I always tell them: “Mary is the Mother who never abandons you, just like her Son, Jesus.  And God put you in this world because HE loves you and has a beautiful dream for you.”  When they hear that, they look at me as if saying: “What is this priest saying to me?”  Then I do a bit of dreaming with them, and I tell them, for example: “Imagine someday having a good profession, a good job, and with the sweat of your brow to buy some land and build your own home?  And to someday have a good wife by your side and to have marvelous children?”  Their faces begin to light up.  “And your children, imagine that someday they say: ‘Thank you, Lord, for the good father you have given me!’  “Yes, Priest, I would like that very much!”  “And that your children would never suffer what you suffered?”  “Yes, Priest, I want to strive for that!”  That youth now has a dream, he almost has a personal ideal, as we would say in Schoenstatt:  My life does have meaning, there is something worthwhile to strive for!  “I do not want my children to suffer what I suffered; I want to be the father I never had.”

Perhaps we can almost say this was also Father Kentenich’s personal ideal:  He did not have a father, yet he was a father to many—that really motivates the young men in jail.  Father Guillermo Carmona, who a long time ago was my novice master and was for a long time Director of the Movement in Argentina, once visited us at Mother of Tupãrenda House.  Much later he related that one of the things that impacted him was when the director of the House said: “When a young person discovers the meaning of his life, he leaves the drugs and the bad life.”  It is a reality!  The pedagogy of ideals changes your life!

When a young person discovers his dream:  I want to be a good father, I want to be the father I never had, then I speak to him very directly:  I say: “Ok, and in that beautiful dream for your life, are there drugs, theft, violence?”  “No, Priest!”  “For mother of your children, do you want a good woman or a girl from the streets— a thief or a drug addict?”  “A good woman, of course!”  “And a good woman, will she want to be with a thief, a drug addict, or a prisoner?  Or with a good man?”  “With a good man, Priest!”  “OK then, what is your task?”  “I have to become that good man, I have to quit drugs and put the nonsense aside because someday I want to be a good father!”

That changes lives!  And as the director of Mother of Tupãrenda House said:  those youths leave the drugs aside.  At least some of them… Of course, there are many who falter, abandon their dream and return to the same disastrous life as before.  But some do achieve it!  I don’t know if some of you know friends, companions, relatives who face this… Once one falls into drugs, it is very difficult to leave them – but the Schoenstatt pedagogy is a great help!  “I have an ideal, it is worthwhile to strive for that ideal, even if the ‘weak point (fissure)’ [3] almost kills me, and I want to take drugs again.  I am not going to fall, because I want to be a good father!”

That is pedagogy of ideals, and here in Tupãrenda, we have the experience!  In Mother of Tupãrenda House, there are youths that were hardcore addicts. They hit bottom, they were able to get out of all of this, and today they are successful professionals.  Are you aware of how all of this really has to do with what we are reading?  This [4] is not a book filled with theories, but it is what we are trying to do in Schoenstatt. 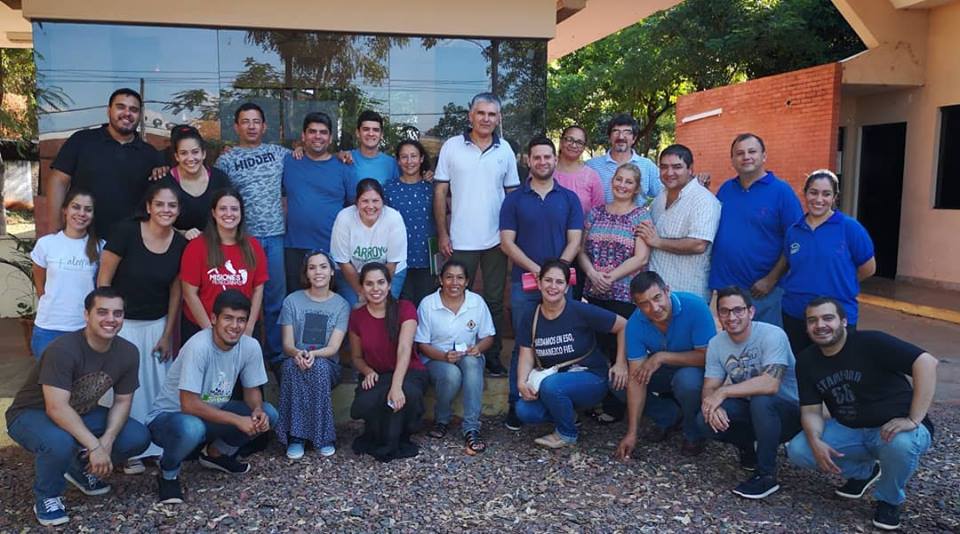 Team of the prison ministry

Talk for the Boys’ Youth of Tupãrenda, Part 3

[2] “grandmother’s child” – reared by the grandmother, often with little or no contact with the parents

Fr. Kentenich’s pedagogy on the peripheries