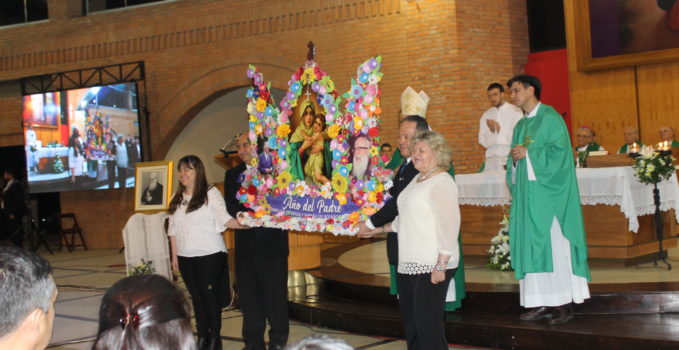 Father calls the whole family to celebrate in Tupãrenda

A  guard at the Tupãrenda shrine wearing a sky blue vest welcomed three pilgrims – two from Ciudad del Este and one from Germany – at the door of the shrine, with a large cordial smile that is typical of Paraguay. She gave us a piece of plain white paper and explained: write your offering for today on this paper and place it in the jar in the Shrine…We know and have been doing it for years. However, this very cordial, joyful, confident invitation made us kneel in the Shrine, look for pens and dedicate a long time to writing down our offering, our petition on this 15 September, the 50th Anniversary of Fr. Kentenich’s Death. In those few minutes I took my entire network of life, the large Schoenstatt.org network, all my friends and some very special people to the Blessed Mother of Tupãrenda and Fr. Kentenich, praying, offering and confidently asking, not without gentle force…- 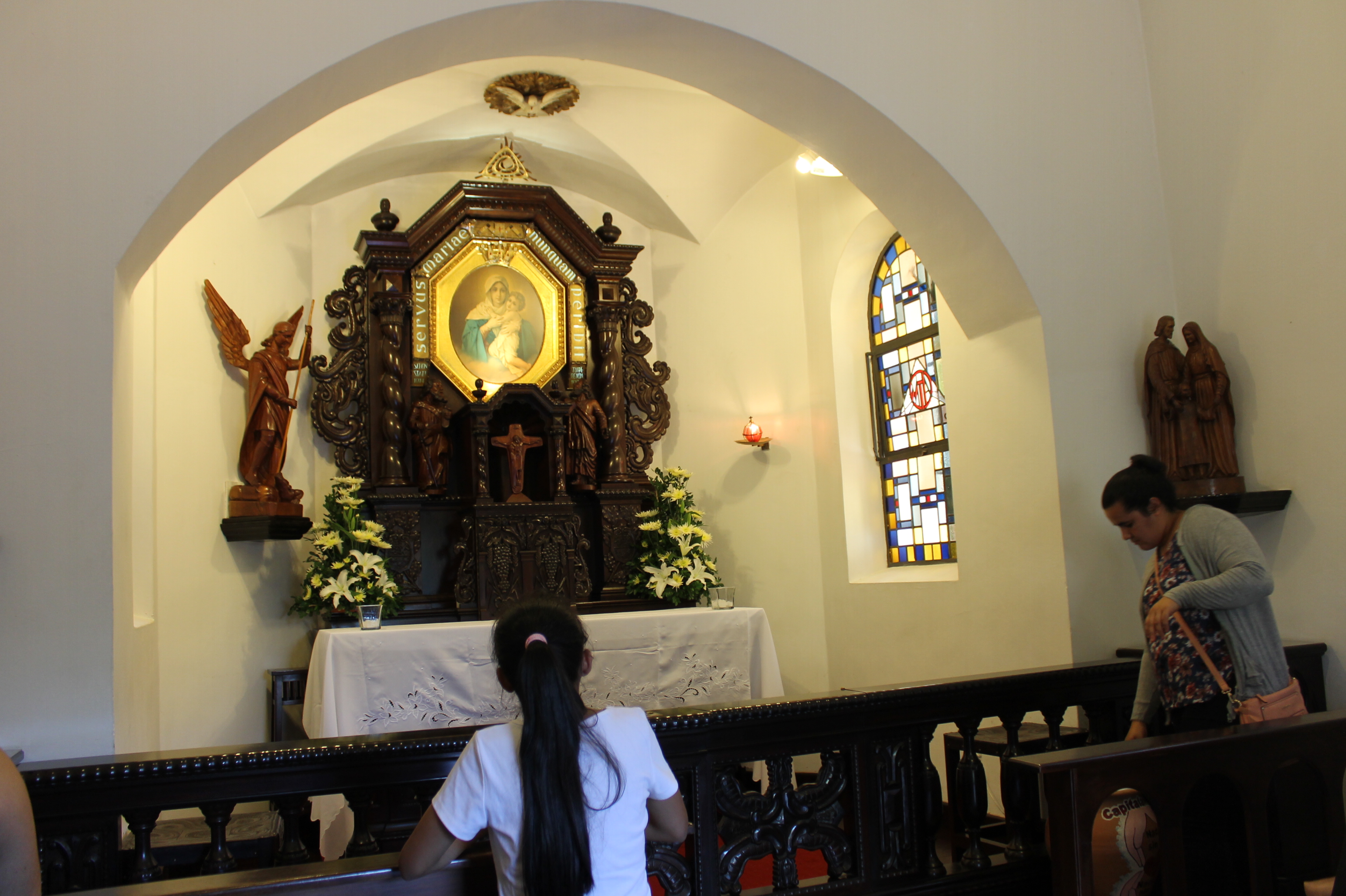 There was an air of celebration hours before the 15 September celebrations, the closing of the Fr. Kentenich Year and the commemoration of 50th anniversary of his birthday into heaven. Schoenstatters from all the country, from Encarnación, Ciudad del Este, Villarica, Concepción, Asunción, San Lorenzo, many having travelled for several hours. There were encounters and reunions, greetings and stories among the youth and people from the early days, among the people from the different cities and projects. Father called the whole family to the celebration in Tupãrenda. Many wore t-shirts or scarves from their dioceses, and everyone took symbols of the capital of grace that they conquered during the year. “We are from Encarnación and we brought the blueprints for the future Shrine”, Sonia Zaracho commented. 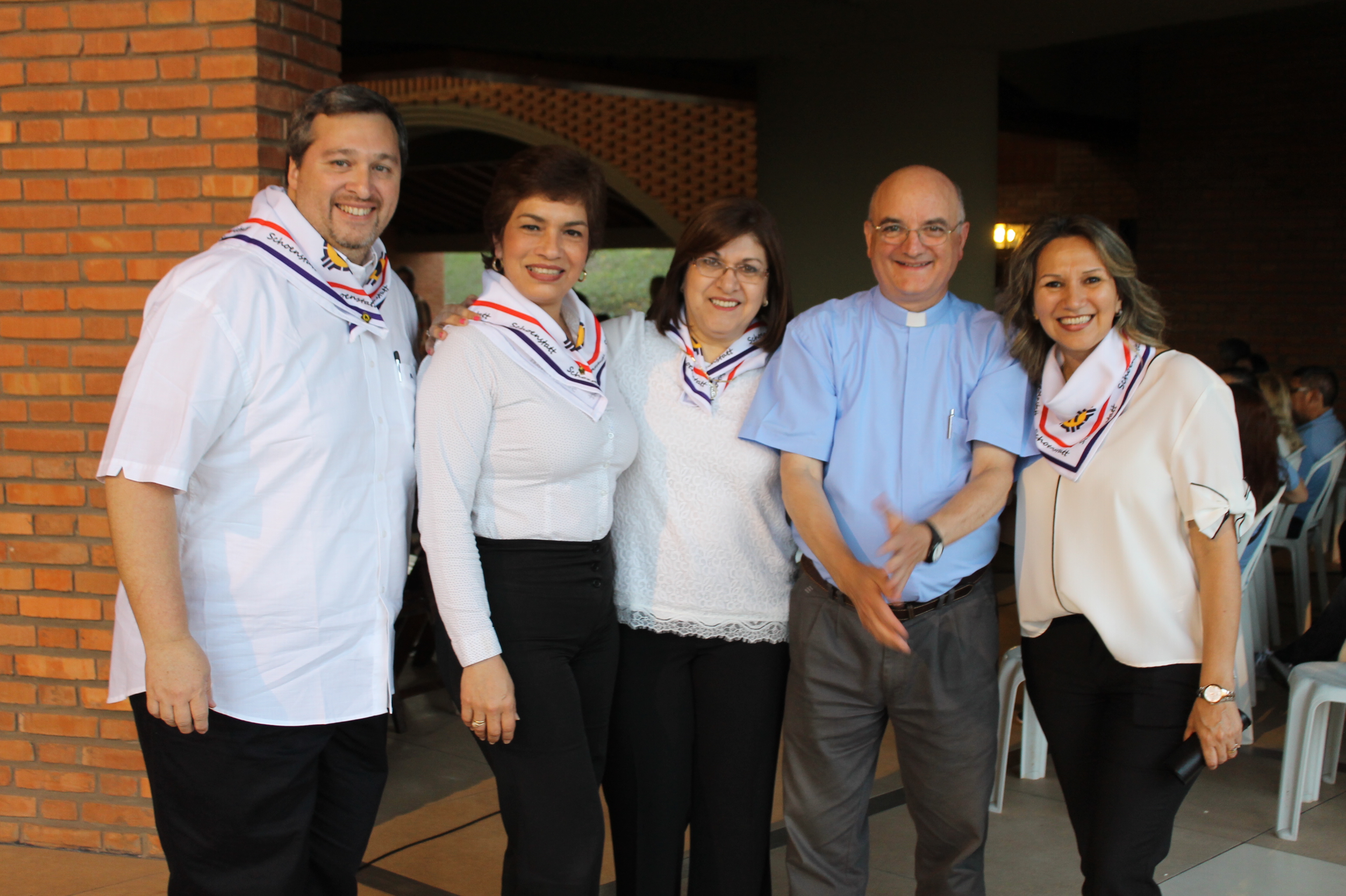 A celebration and a challenge

Posters of the pre-program: a folk dance with all the joy of life, moments of cordial applause as the various cities were welcomed, video messages from Paraguayans living abroad or people attached to Paraguay such as Sr. Andrea, Fr. Ángel Strada, Fr. Juan Pablo Catoggio, a video summarized the activities of this year, a presentation about Fr. Kentenich’s childhood by the little missionaries of the Pilgrim Mother Campaign…and music, a lot of music from different eras that evoked memories and emotions.

The Mass developed with the same joyful festivity, with the Sunday readings and Monsignor Francisco Pistilli’s challenging homily [in Spanish] about power and covenant with the true power, that is, God’s power, the power of service, the Church (and Schoenstatt) without earthly power, but full of life: Our power, lived in the charism, is the Covenant of Love. It is the strength of those who know they are loved in their smallness and place their frailty at God’s disposal, so that, united to Mary, the Lord will do great things for the Glory of the One Triune God. It is the strength of attachment God wants, the power of childlikeness, where the helplessness of the child becomes a blessing from the Father. Our power is the commitment to follow Christ with Mary, offering the humble power of the capital of grace, the strength of concrete actions that mold our Christian life, so that Mary, as a minister of the graces of a home, inner transformation and apostolic zeal, will help us to reach the fullness of the supernatural grace of redeemed children. 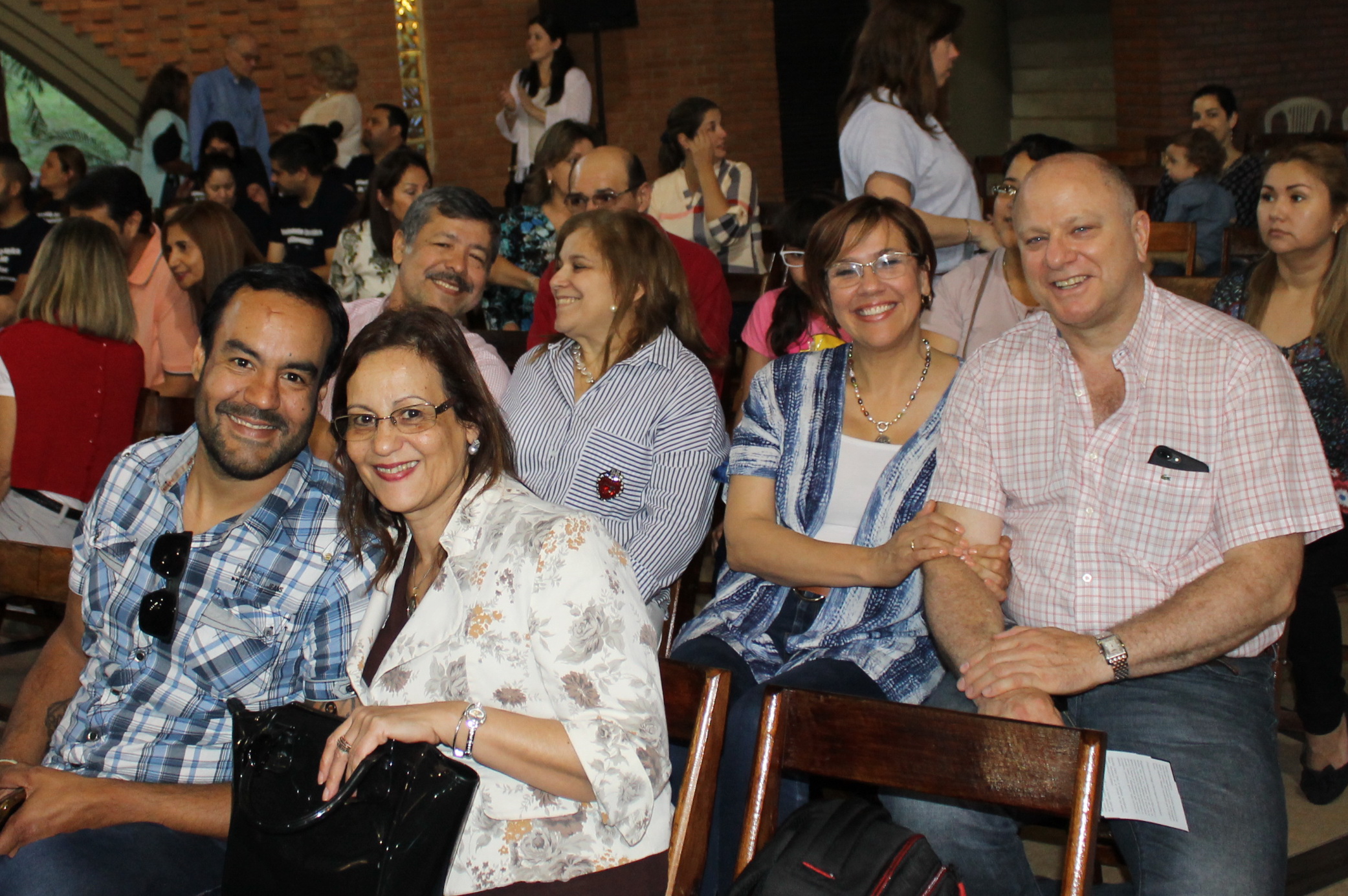 A large number from all towns and nations

Already when we entered the Church, and again when we exited after the final blessing, towards the Shrine it was surprising to see the great number of people that Fr. Kentenich has called. Walking in procession through the grounds lit by hundreds of candles, brought to mind that we are part of a multitude called from so many towns and nations, who during this day went on pilgrimage with and towards Father, to allow us to be sent to the periphery, to embody his person and his charisma, to place him and ourselves at the service of the Church and society. We went on pilgrimage through the large grounds of Tupãrenda, while in Germany, Costa Rica, Brazil many came together in large celebrations, and others gathered in smaller numbers in Cape Town, Bragado, La Plata, Santa Cruz de la Sierra, Florencio Varela, Santa Fe…Bishop Pistilli’s homily resonates:

“Who do we say Fr. Joseph Kentenich is? Sometimes we would present him with human criteria that pleases the public, demonstrate his greatness in his many writings and his charism that became so widespread. The truly great thing about Fr. Kentenich is that he lived the correct covenant, as a path to belong fully to Christ. In this covenant, he became emptied of himself to allow the God of Providence who is rich in mercy to manifest himself, the Lord of history and the Teacher of Life. His biography is a testimony of that school for us, where we see that from his childhood to his return to Schoenstatt, he was deprived of power so many times so that he only entrusted his childlike helplessness into the correct hands. In Gymnich, Oberhausen, Dachau, Milwaukee, the answer to the question: Who do they say that Fr. Kentenich is?” is revealed. 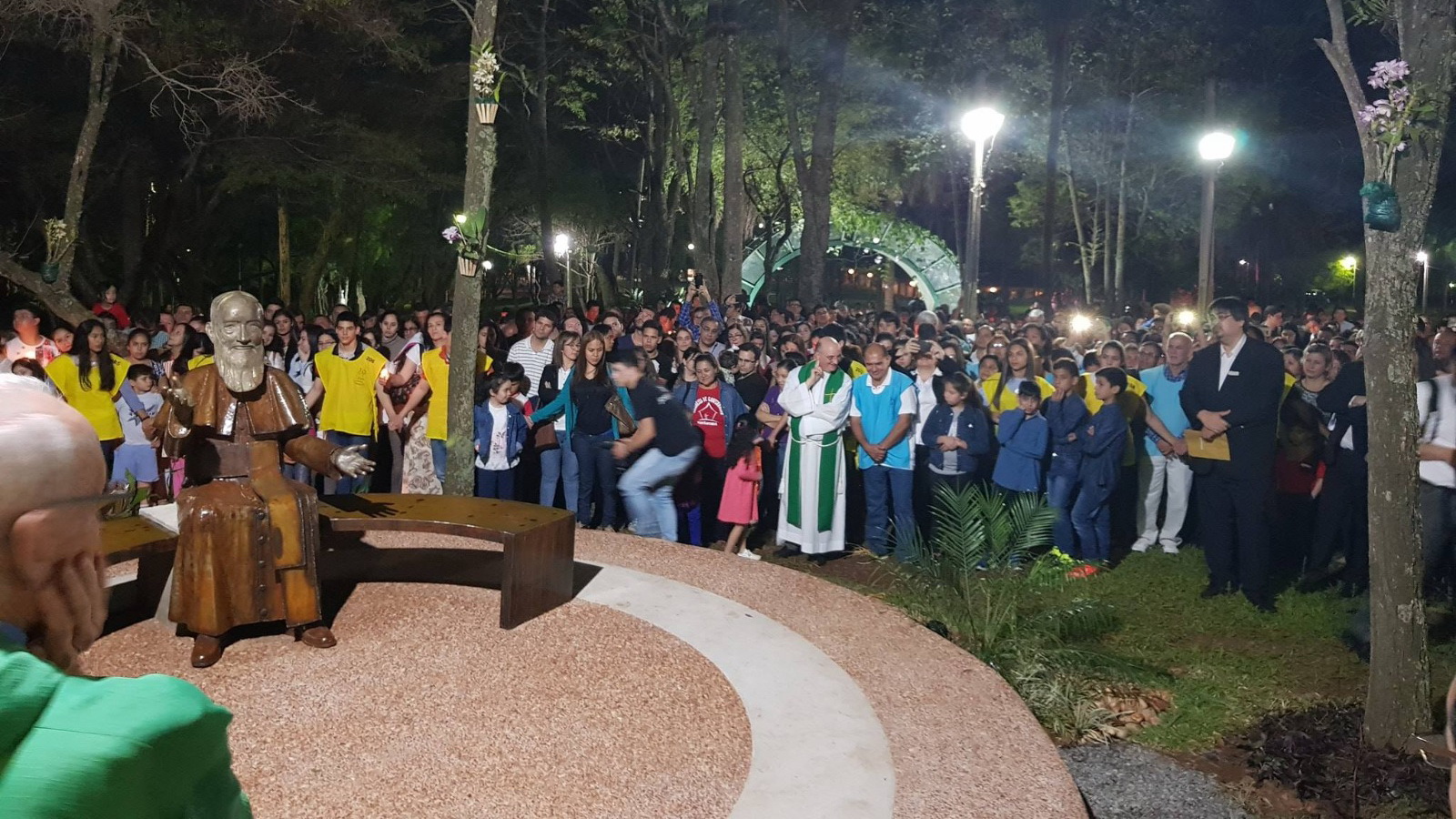 Towards the periphery – Kentenich reaching out

During the blessing of the new Fr. Kentenich statue, made by the local artisan Juan Pistilli, photos are taken and all the joy of this celebration explodes in large fireworks over the Shrine, I think about my schedule of the following day with the visit to the juvenile penitentiary and I understand that my first day after Fr. Kentenich’s 50th anniversary will be marked by reaching out to the periphery, and that this is only possible in the covenant that leads us to live as Church without power and full of life, that Fr. Kentenich gave us with his life and his prophetic message. Father, in us through our times. 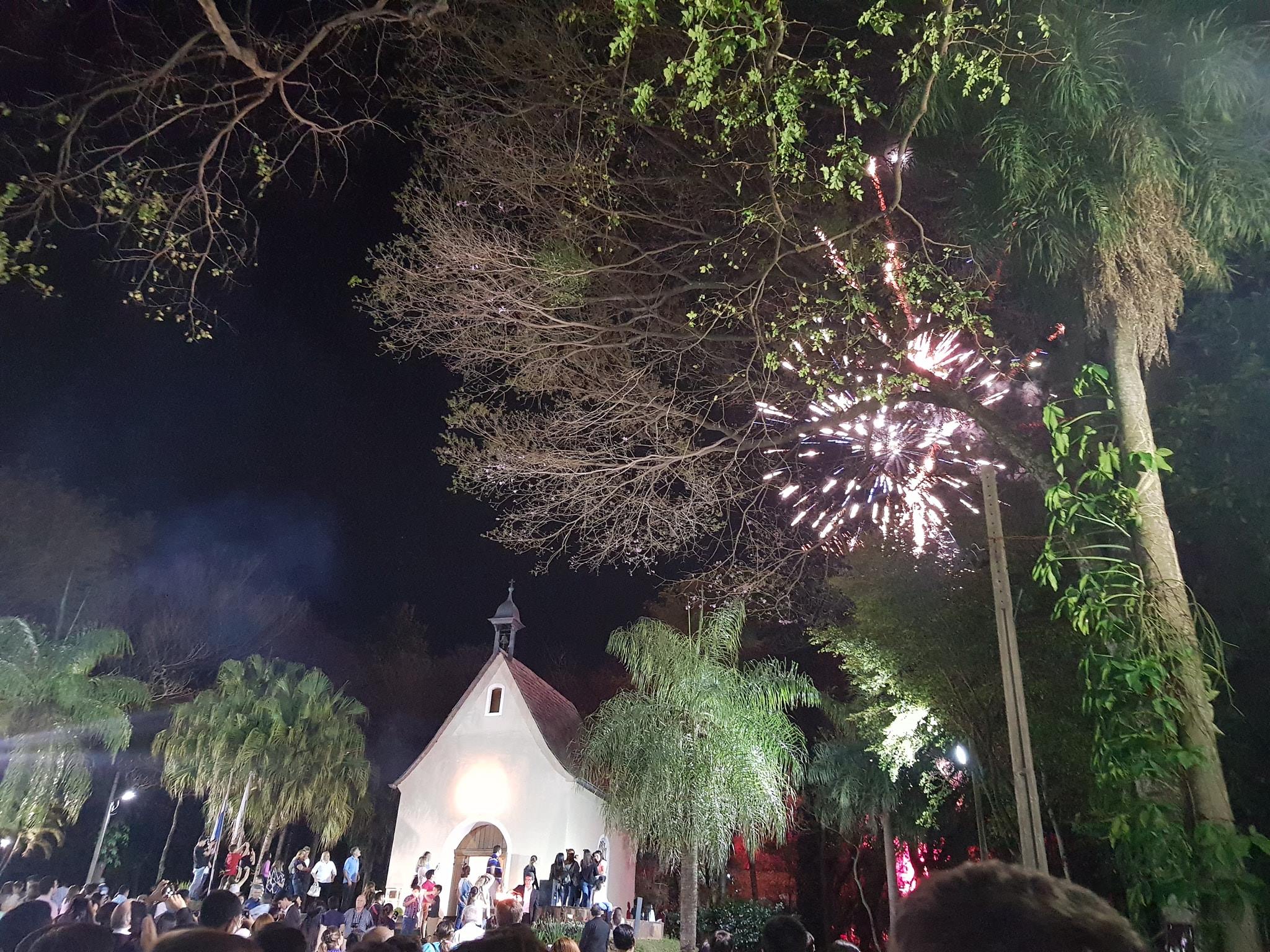 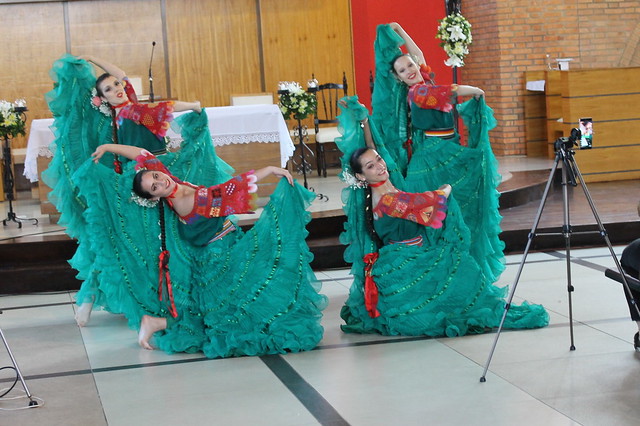