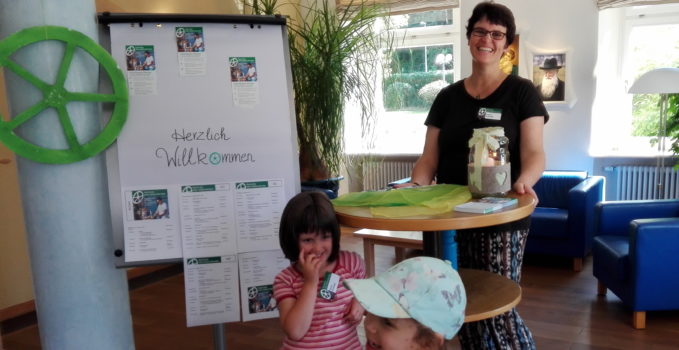 At the end of August, a pedagogical seminar for educators took place at House Marienau in Schoenstatt.  The participants felt very well taken care of, and in the weeks since, have amassed the fruits of their labor from those days and put them together.

Discover the pedagogy of Father Kentenich and spread it. Present the different facets of his pedagogy in such a way that they can be effective not only to accompany one spiritually, but also to be used in schools, in business and in the upbringing of one’s own children.

The idea of ​​an educational seminar was born with this desire and vision to be used for a wide range of educators: for all those who are leaders and active in bringing up children – not only in their own families, but also pupils, students and employees.

A team of married couples and a young woman worked on the project motivated by Sister Gertrud Maria Erhard.  The team included teachers, leaders, social workers, and educators.  Their goal was to develop a pedagogical event that should not only be theoretically oriented, but should also include training elements with dialogue.  It was also important that Father Kentenich’s person was able to be experienced “in the middle” of it – practical and concrete 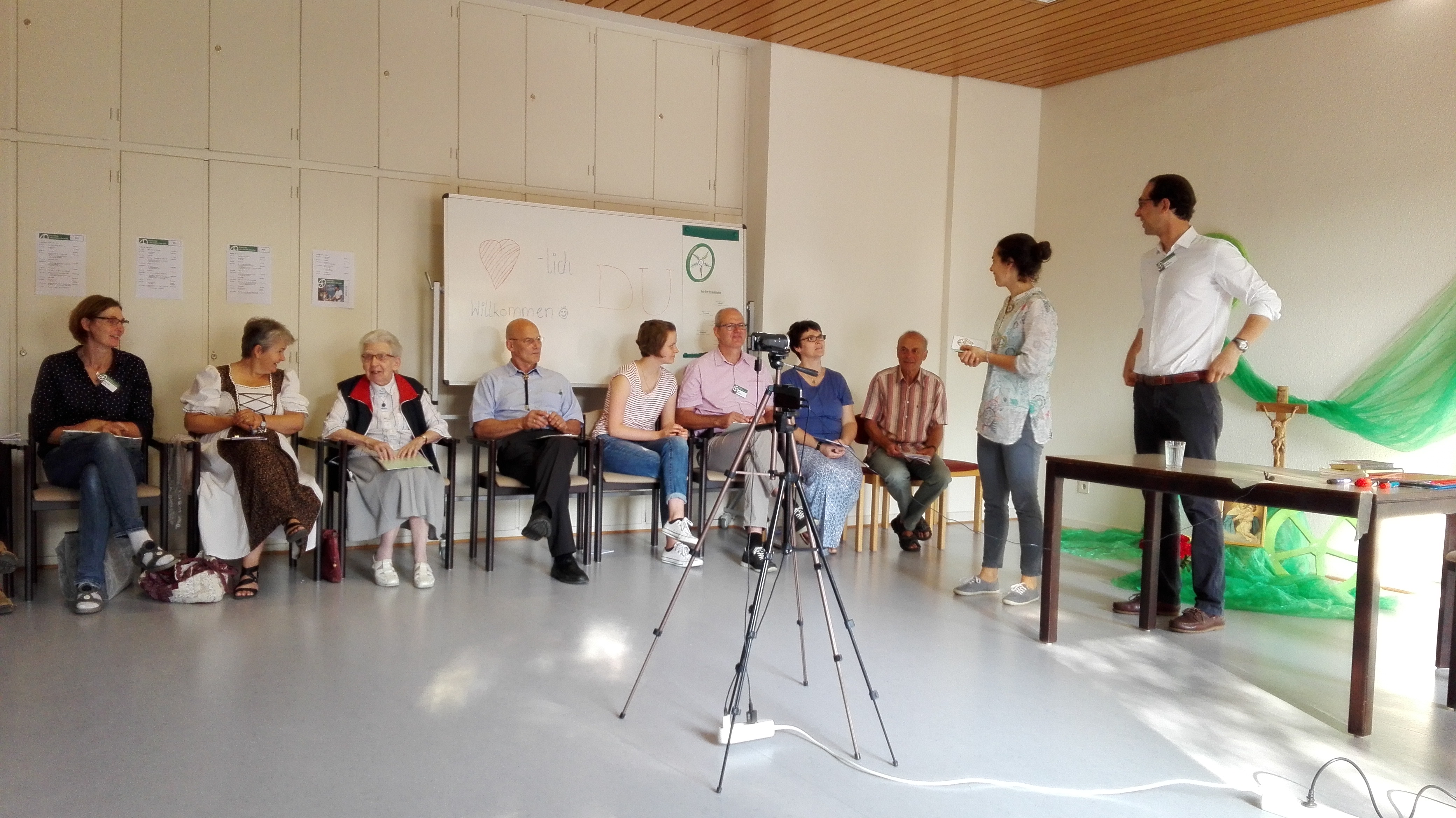 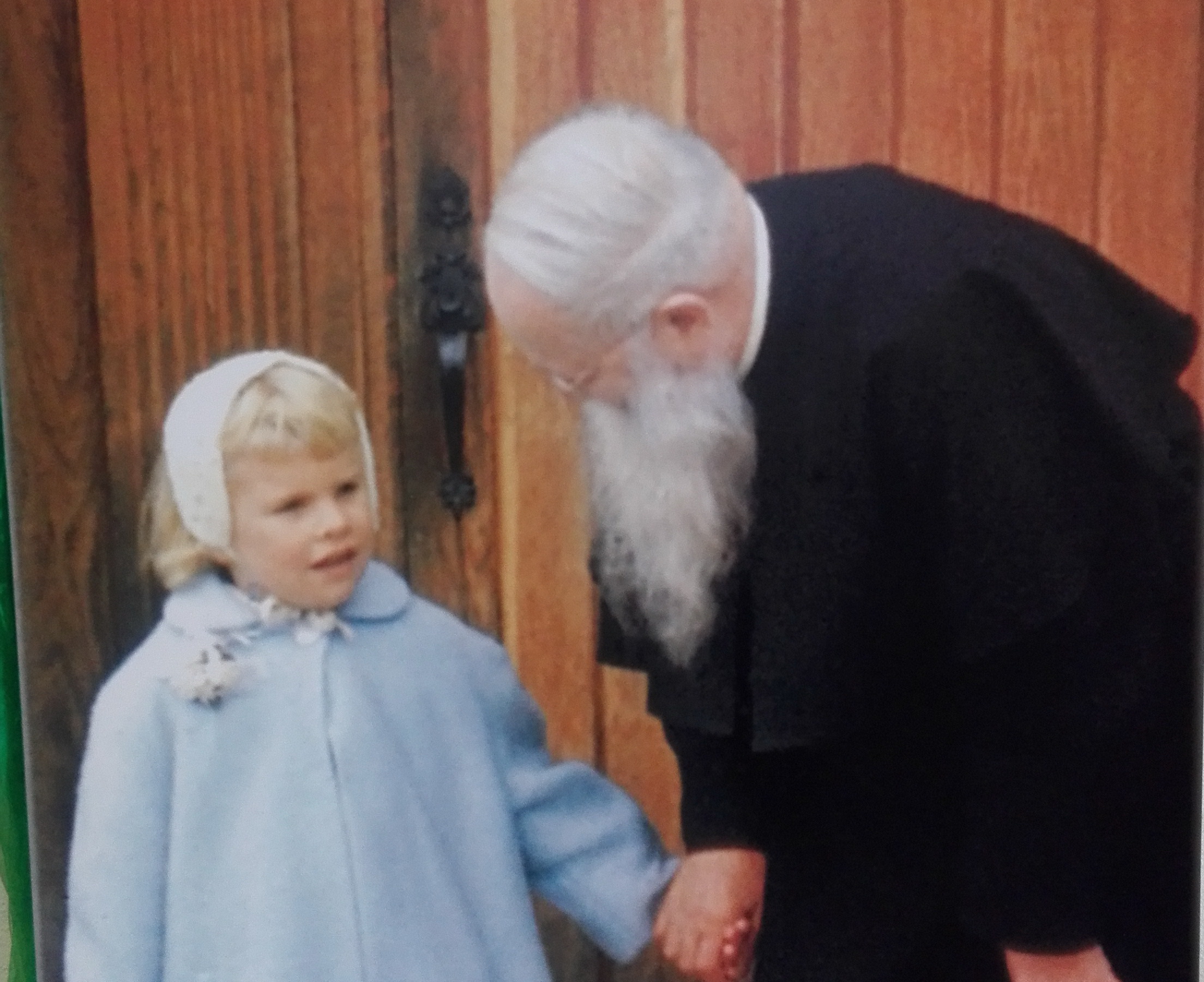 In the end, the seminar was worked on that took place from August 23-27, 2017 at the Marienau in Schoenstatt.  Thirty participants (plus fifteen children and adolescents) from different parts of Germany, Austria, Switzerland, and Hungary were inspired by the idea and formed a heterogeneous group that grew together during the five days.  All participants learned with each other and from one another and the organizers’ experience of all the diversity was very inspiring.

The main speaker was Dr. Pecsi, who was responsible for thirty schools in Hungary and had set off to join the group even though the summer holidays in Hungary had just ended at the beginning of the meeting.  It was a great challenge for her, but she said it was worth it at the end of the session.

On the first day, the organization team warmly greeted and welcomed all the participants.

After the first introductions, Sr. Dr. M. Doria Schlickmann gave an overview of the Kentenich pedagogy.  She pointed out what made his pedagogy stand out from the other “reform educators” of his time was namely the reality of God and his grace as a further “educational power.”  “Man is a being that is realized in growth to God.”  From this perspective, an optimistic and organic view is founded on man.  Father Kentenich reversed the conventional pedagogy of his time.  By giving complete transparency about his actions and inviting the young people to self-educate, he makes the object (to be educated) a subject, authority on a level playing field, love and freedom.  “It is part of my self-realization that I educate myself, I have a right to that,” Kentenich said plainly.

Father Ángel Strada went on with the answer to the question: “How did Father Kentenich lead?”

Here are some samples from the guiding principles, in which he named:  “The personal conviction, the serious personal struggle is the basis for the moral authority of an educator. Yet no one can ask me to do everything that I say, just that I make a serious effort.  It’s my right to make stupid mistakes, errors.” 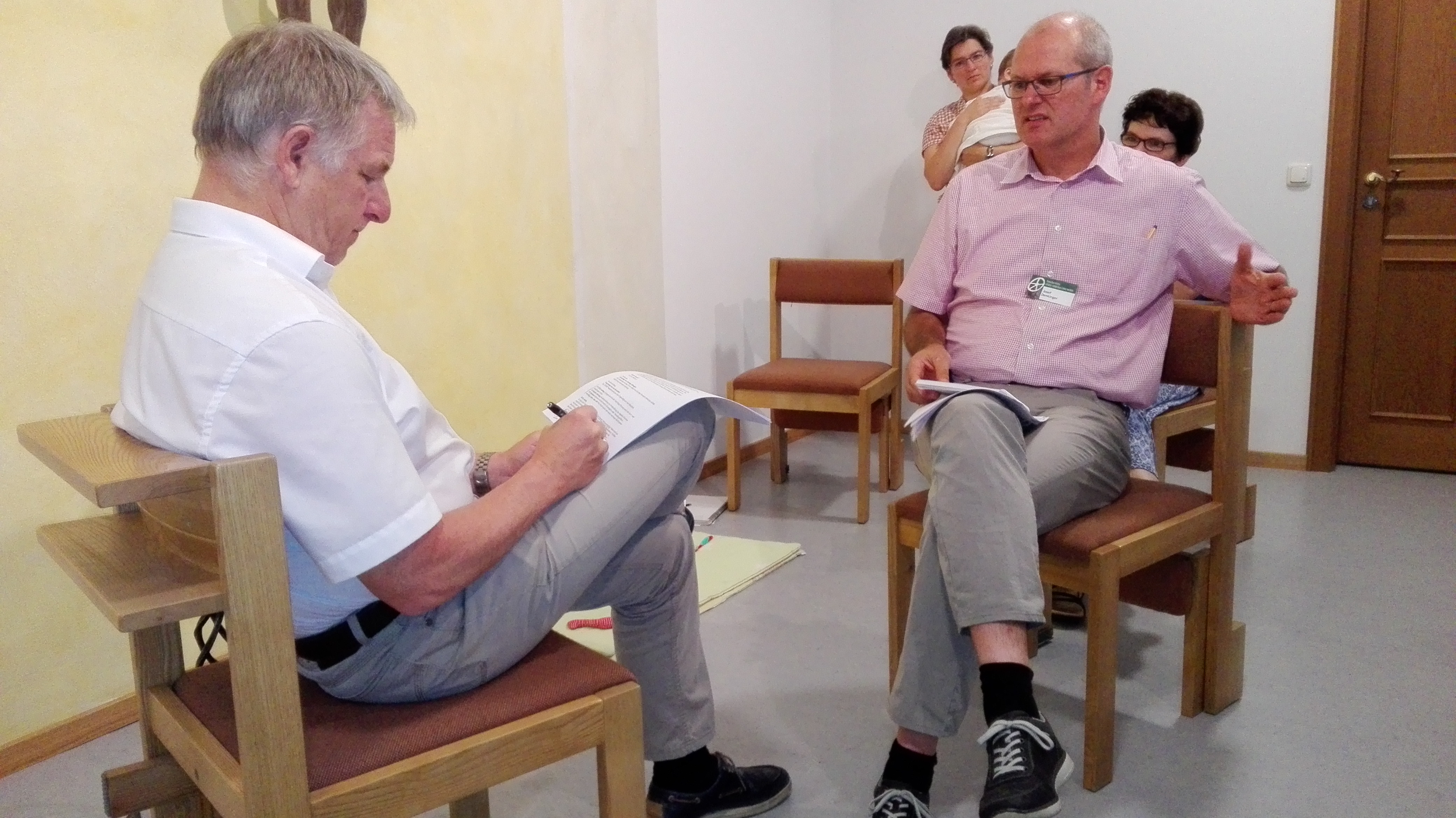 Over the next three days, each day one aspect of the education process was emphasized: the I (Educator), the you (to be educated) and the we (the group).

Each day began with a testimony of Father Kentenich’s contemporaries, who were able to learn first-hand what it meant for Father Kentenich to lead and to educate. Each testimony showed a Father Kentenich, who was not only a spiritual leader, but in the modern sense, a coach, who left deep impressions with those who knew him personally.

Here are also a few examples:

Sister M. Matthia Amrein had flown to Milwaukee after her studies to meet Father Kentenich.  She said of him, “You felt at home with him…I knew that when I confided in him, he led me there, where I was longing to go, but where I was not able to go with only my own strength … He could help to recognize the will of God and arouse the longing to follow him … There was new feeling of life in us: I am God’s child, and I am loved!”

Ms. Inge Bernemann, a Schoenstatt woman, experienced her first pedagogical conference with him as a student.  At the time, she said to herself, “This man, I can believe. He speaks of life, not of books … His fundamental position was his openness to the other, without hidden intentions.”

She had the opportunity to speak with Father Kentenich in a difficult situation, where a decision had to be made.  She says, “He sat there and took me up.  Then he said, ‘Yes, that is all now living in me.’  And I had the feeling that I could live in him, with the all positive and the negative.”  “He broke the problem down into individual questions, illuminated all aspects.  Finally, he said, ‘I have the impression that you are now at the right place.  But you must decide.’ ”

After the testimonies from Kentenich’s time period, each day there was always a closing lecture by Dr. Pecsi.  Although German is not her mother language, she was an inspiration with her energy and her knowledge about Kentenich’s pedagogy.  Through her, the participants learned that education is a service for life that never ends and starts with us, with our self-education. 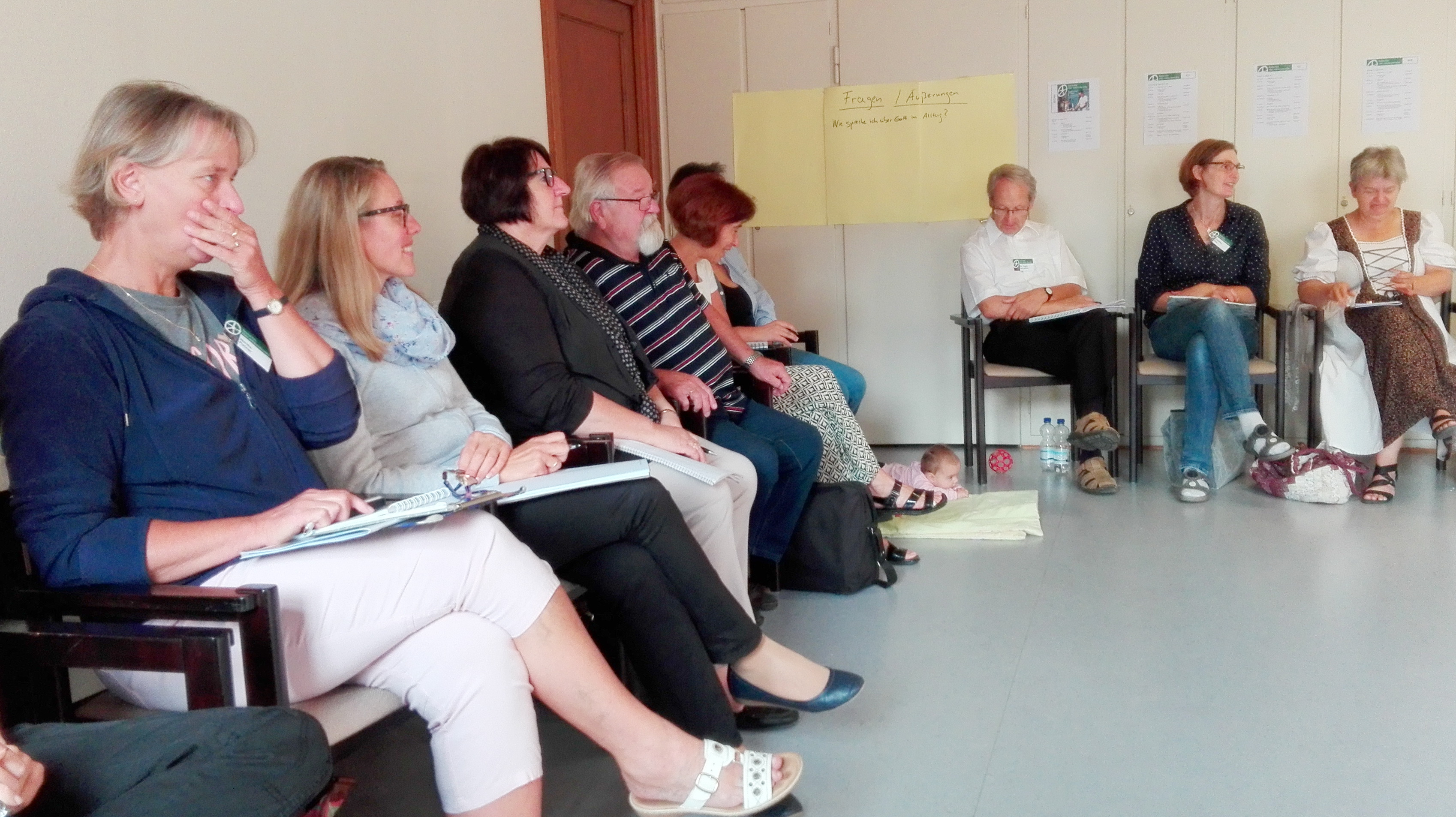 The afternoons were devoted to practical exercises and the reading of Father Kentenich’s texts. On the first day, the focus was on the “I” of the educator.  A questionnaire gave suggestions for self-reflection.  On the second day, the coaching method “GROW” was used, which, similar to Father Kentenich’s style, should stimulate the initiative and freedom of the learner.  On the third day, which emphasized community, small groups worked on questions that had arisen over the last few days.

After the evening activities, Klaus Hagmann offered “Life Kinetics” – a method that improved brain performance through various exercises of coordinated movements and was enthusiastically accepted by the participants.  O-Ton: “The holistic character of the day was always present.”

The culminating conclusion of the seminar was the Holy Mass with Father Ludwig Güthlein, who in his homily continued with the subject of the “Good Shepherd” that had accompanied the entire seminar.

Participant comments from the feedback-round: 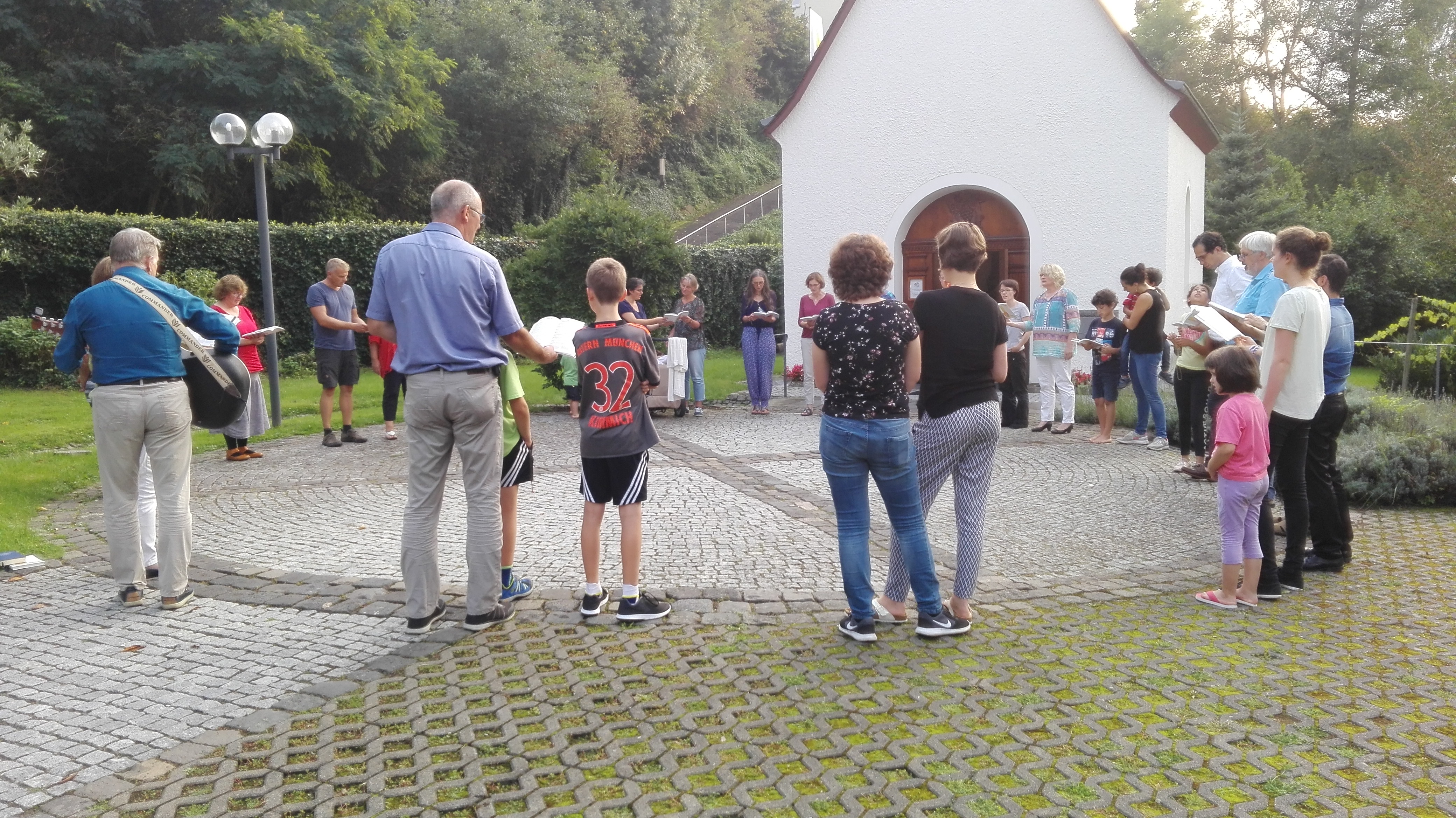 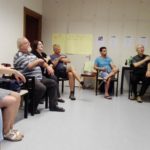 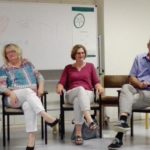 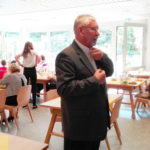