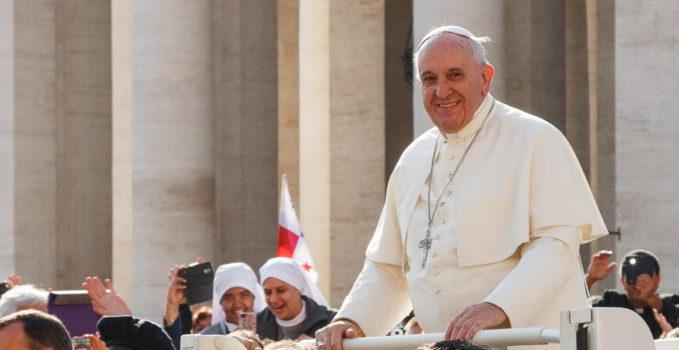 “Today we celebrate World Mission Sunday under the theme: “Mission at the heart of the Christian Faith.” I urge everyone to live the joy of the mission, witnessing to the Gospel wherever they live and work. At the same time, we are called to give support by our care and concrete help to the missionaries who have gone out to proclaim Christ to those who still do not know him.” After recalling World Mission Sunday celebrated on 22 October, Pope Francis called an extraordinary missionary month for October 2019.

“I also recall that it is my intention to promote an Extraordinary Missionary Month in October 2019 to nourish the fervour for the evangelising activity of the Church ad gentes. On the day that we recall the liturgical memory of St. John Paul II, the missionary pope: we entrust the Church’s mission in the world to his intercession.

What a joy for the Apostolic Schoenstatt Movement with its Pilgrim Mother Campaign and the Family and youth Missions, with its missionary vocation which was renewed on the occasion of the centenary of the Covenant of Love in Rome with the Holy Father, encouraging the whole Movement in this time to become a “Schoenstatt that reaches out.”

In his letter, the Holy Father expresses his hope to “combat the recurring temptation lurking beneath every form of ecclesial introversion, self-referential retreat into comfort zones, pastoral pessimism and sterile nostalgia for the past.  Instead, may we be open to the joyful newness of the Gospel.  In these, our troubled times, rent by the tragedies of war and menaced by the baneful tendency to accentuate differences and to incite conflict, may the Good News that in Jesus forgiveness triumphs over sin, life defeats death and love conquers fear, be proclaimed to the world with renewed fervour, and instil trust and hope in everyone.”

He hopes that “all the faithful carry in their hearts the proclamation of the Gospel and missionary and evangelising conversion to their own communities, so that love for the mission can grow, which “is a passion for Jesus, but at the same time, a passion for their people.” 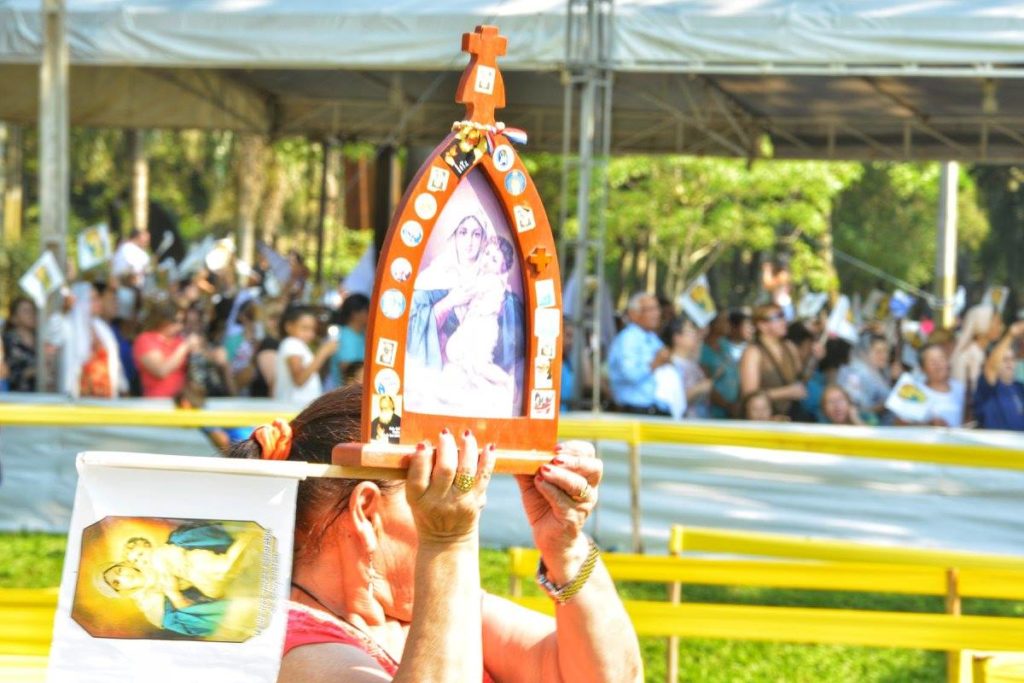 To my Venerable Brother

Prefect of the Congregation for the Evangelization of Peoples

On 30 November 2019, we will celebrate the hundredth anniversary of the promulgation of the Apostolic Letter Maximum Illud, with which Pope Benedict XV sought to give new impetus to the missionary task of proclaiming the Gospel.  In 1919, in the wake of a tragic global conflict that he himself called a “useless slaughter,”[1] the Pope recognized the need for a more evangelical approach to missionary work in the world, so that it would be purified of any colonial overtones and kept far away from the nationalistic and expansionistic aims that had proved so disastrous.  “The Church of God is universal; she is not alien to any people,”[2] he wrote, firmly calling for the rejection of any form of particular interest, inasmuch as the proclamation and the love of the Lord Jesus, spread by holiness of one’s life and good works, are the sole purpose of missionary activity.  Benedict XV thus laid special emphasis on the missio ad gentes, employing the concepts and language of the time, in an effort to revive, particularly among the clergy, a sense of duty towards the missions.

That duty is a response to Jesus’ perennial command to “go into the whole world and proclaim the Gospel to every creature” (Mk 16:15).  Obeying this mandate of the Lord is not an option for the Church: in the words of the Second Vatican Council, it is her “essential task,”[3] for the Church is “missionary by nature.”[4]  “Evangelizing is in fact the grace and vocation proper to the Church, her deepest identity; she exists in order to evangelize.”[5]  The Council went on to say that, if the Church is to remain faithful to herself and to preach Jesus crucified and risen for all, the living and merciful Saviour, then “prompted by the Holy Spirit, she must walk the same path Christ walked: a path of poverty and obedience, of service and self-sacrifice.”[6]  In this way, she will effectively proclaim the Lord, “model of that redeemed humanity, imbued with brotherly love, sincerity and a peaceful spirit, to which all aspire.”[7]

What Pope Benedict XV so greatly desired almost a century ago, and the Council reiterated some fifty years ago, remains timely.  Even now, as in the past, “the Church, sent by Christ to reveal and to communicate the love of God to all men and nations, is aware that there still remains an enormous missionary task for her to accomplish.”[8]  In this regard, Saint John Paul II noted that “the mission of Christ the Redeemer, which is entrusted to the Church, is still very far from completion,” and indeed, “an overall view of the human race shows that this mission is still only beginning and that we must commit ourselves wholeheartedly to its service.”[9]  As a result, in words that I would now draw once more to everyone’s attention, Saint John Paul exhorted the Church to undertake a “renewed missionary commitment”, in the conviction that missionary activity “renews the Church, revitalizes faith and Christian identity, and offers fresh enthusiasm and new incentive.  Faith is strengthened when it is given to others!  It is in commitment to the Church’s universal mission that the new evangelization of Christian peoples will find inspiration and support.”[10]

In my Apostolic Exhortation Evangelii Gaudium, drawing from the proceedings of the Thirteenth Ordinary General Assembly of the Synod of Bishops, which met to reflect on the new evangelization for the transmission of the Christian faith, I once more set this urgent summons before the whole Church.  There I wrote, “John Paul II asked us to recognize that ‘there must be no lessening of the impetus to preach the Gospel’ to those who are far from Christ, ‘because this is the first task of the Church.’  Indeed, ‘today missionary activity still represents the greatest challenge for the Church’ and ‘the missionary task must remain foremost.’ What would happen if we were to take these words seriously?  We would realize that missionary outreach is paradigmatic for all the Church’s activity.”[11]

I am convinced that this challenge remains as urgent as ever. “[It] has a programmatic significance and important consequences.  I hope that all communities will devote the necessary effort to advancing along the path of a pastoral and missionary conversion that cannot leave things as they presently are.  ‘Mere administration’ can no longer be enough.  Throughout the world, let us be ‘permanently in a state of mission.’”[12]  Let us not fear to undertake, with trust in God and great courage, “a missionary option capable of transforming everything, so that the Church’s customs, ways of doing things, times and schedules, language and structures can be suitably channeled for the evangelization of today’s world rather than for her self-preservation.  The renewal of structures demanded by pastoral conversion can only be understood in this light: as part of an effort to make them more mission-oriented, to make ordinary pastoral activity on every level more inclusive and open, to inspire in pastoral workers a constant desire to go forth and in this way to elicit a positive response from all those whom Jesus summons to friendship with himself.  As John Paul II told the Bishops of Oceania, ‘All renewal in the Church must have mission as its goal if it is not to fall prey to a kind of ecclesial introversion.’”[13]

The Apostolic Letter Maximum Illud called for transcending national boundaries and bearing witness, with prophetic spirit and evangelical boldness, to God’s saving will through the Church’s universal mission.  May the approaching centenary of that Letter serve as an incentive to combat the recurring temptation lurking beneath every form of ecclesial introversion, self-referential retreat into comfort zones, pastoral pessimism and sterile nostalgia for the past.  Instead, may we be open to the joyful newness of the Gospel.  In these, our troubled times, rent by the tragedies of war and menaced by the baneful tendency to accentuate differences and to incite conflict, may the Good News that in Jesus forgiveness triumphs over sin, life defeats death and love conquers fear, be proclaimed to the world with renewed fervour, and instil trust and hope in everyone.

In the light of this, accepting the proposal of the Congregation for the Evangelization of Peoples, I hereby call for an Extraordinary Missionary Month to be celebrated in October 2019, with the aim of fostering an increased awareness of the missio ad gentes and taking up again with renewed fervour the missionary transformation of the Church’s life and pastoral activity.  The Missionary Month of October 2018 can serve as a good preparation for this celebration by enabling all the faithful to take to heart the proclamation of the Gospel and to help their communities grow in missionary and evangelizing zeal.  May the love for the Church’s mission, which is “a passion for Jesus and a passion for his people,”[14] grow ever stronger!

I entrust you, venerable Brother, the Congregation which you head, and the Pontifical Missionary Societies with the work of preparing for this event, especially by raising awareness among the particular Churches, the Institutes of Consecrated Life and Societies of Apostolic Life, and among associations, movements, communities and other ecclesial bodies.  May the Extraordinary Missionary Month prove an intense and fruitful occasion of grace, and promote initiatives and above all prayer, the soul of all missionary activity.  May it likewise advance the preaching of the Gospel, biblical and theological reflection on the Church’s mission, works of Christian charity, and practical works of cooperation and solidarity between Churches, so that missionary zeal may revive and never be wanting among us.[15] 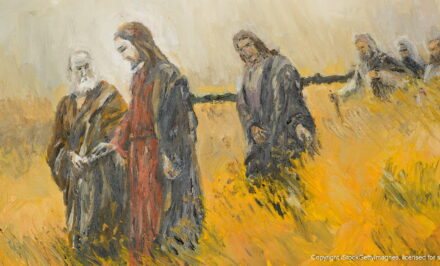 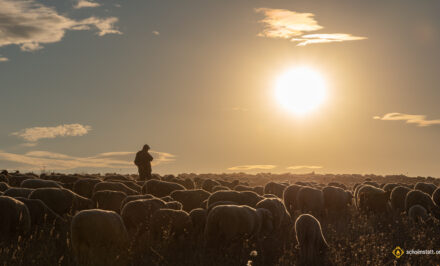 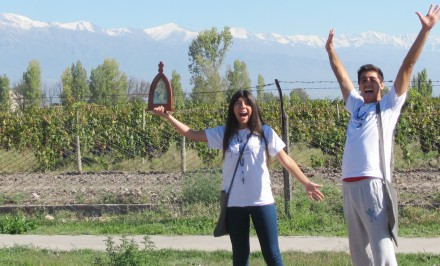