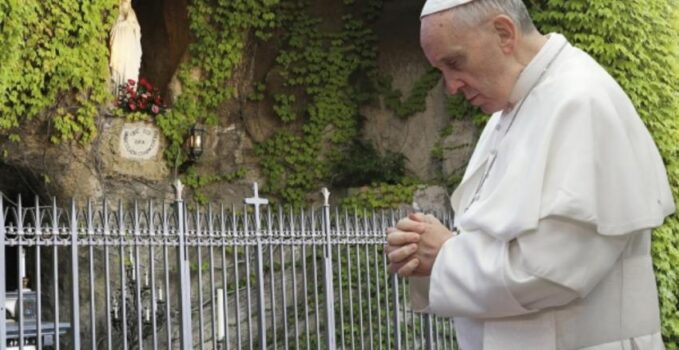 UNITED IN PRAYER FOR THE WORLD, WITH POPE FRANCIS •

United in prayer to invoke the help and assistance of Our Lady in the pandemic, and to entrust the whole of humanity to the Lord. On 30 May 2020, at 5:30 pm, Pope Francis will preside over the prayer of the Holy Rosary from the Grotto of Lourdes in the Vatican Gardens. The Marian celebration, to be broadcast live on via satellite, is organised by the Pontifical Council for Promoting New Evangelisation, on the theme: “Devoted and with one accord to prayer, together with Mary” (Acts 1:14). Shrines all over the world will join in the prayer, with special participation on the part of families. It will be a worldwide act of prayer for those who wish to unite with Pope Francis on the eve of Pentecost Sunday.—

Some women and men representing various categories of people particularly affected by the virus will pray the Mysteries. There will be a doctor and a nurse, as witnesses to the medical personnel working on the front lines in the hospitals; a person who has been cured and one who has lost a family member, in the name of all those who have been personally touched by the coronavirus; a priest, hospital chaplain and a nursing nun, for all the priests and consecrated persons close to those affected by the disease; a pharmacist and a journalist, who represent all those who, even during the period of the pandemic, have continued to serve for others; a Civil Defence volunteer with his family, on behalf of all those who are working to deal with this emergency and the vast world of volunteerism; and a young family, into which a child was born precisely during this period, as a sign of hope and of the victory of life over death.

The Holy Father will place the many cares and sorrows of humanity, further aggravated by the spread of Covid-19, at the feet of Mary. The appointment for the end of the Marian month is a further sign of closeness and comfort for those who, in various ways, have been affected by the coronavirus, in the certainty that the Heavenly Mother does not neglect our requests for protection.

The largest shrines on the five continents will be connected. For example, from Europe: Lourdes, Fatima, San Giovanni Rotondo, Pompeii and Czystochowa (Poland); from the United States of America: the Shrine of the Immaculate Conception (Washington, D.C.); from Africa: the Shrine of Elele (Nigeria) and Notre-Dame de la Paix (Ivory Coast); and from Latin America: the Shrine of Our Lady of Guadalupe (Mexico), Chiquinquira (Colombia), Lujan and Milagro (Argentina).

In a letter, Bishop Rino Fisichella, President of the Pontifical Council for the Promotion of the New Evangelization, addressed himself directly to the rectors of the Shrines to invite them to organize and promote this special moment of prayer in accordance with current health regulations and the time zone of the place.