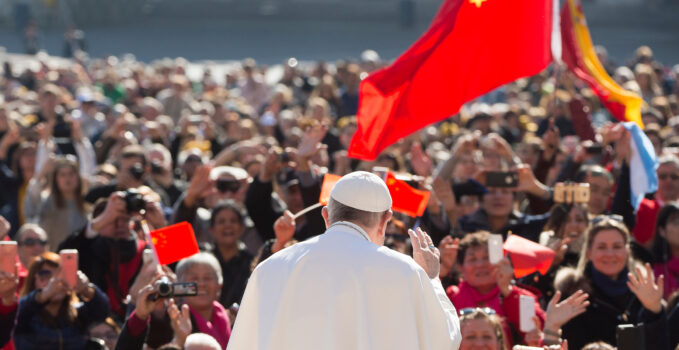 WE PRAY WITH POPE FRANCISCO, mfi •

In the “Pope’s Video”, which transmits the Pope’s universal prayer intention month by month, he focuses his message on the Christian community in China, where “the Church looks forward with hope”. On this occasion, the Holy Father asks us to pray for the Catholics of this country so that they “persevere in fidelity to the Gospel and grow in unity”.

Since the 1970s, China has seen a significant growth in Christianity. In 2010, the Pew Research Center estimated that there were 67 million Christians in China, approximately 5% of the total population. Others estimated that this figure is close – according to a 2018 update – to 100 million. This growth shows how this nation continues to be a fertile land for more and more families who believe in Jesus Christ and his promise, and who through gestures of service give an example of the kingdom of God. Benedict XVI’s important letter to Chinese Catholics in May 2007 and Pope Francis’ message to “Chinese Catholics and the Universal Church” of September 2018, in which he presented the Interim Agreement signed between the Holy See and the representative of the Republic of China, are steps that have been taken on a path towards the recovery of the unity of the Church in China. “It is normal that such a path is long, difficult and full of misunderstandings – the Gospel is full of misunderstandings – so we must pray, because the Lord, Creator of Heaven and Earth, transforms the heart through prayer and helps reconciliation”.

In alliance of solidarity with Francis, let us pray with him for the Christians in China and let us spread the video and the prayer intention that makes us part of a universal church in solidarity.

And of course, we will also make our own the prayer with which Francis asks for all those affected by the Coronavirus:

I would also like to express my closeness to and pray for the people who are sick because of the virus that has spread in China. May the Lord welcome the deceased in His peace, comfort the families and sustain the great commitment of the Chinese community, already put into practice, to fight the epidemic.