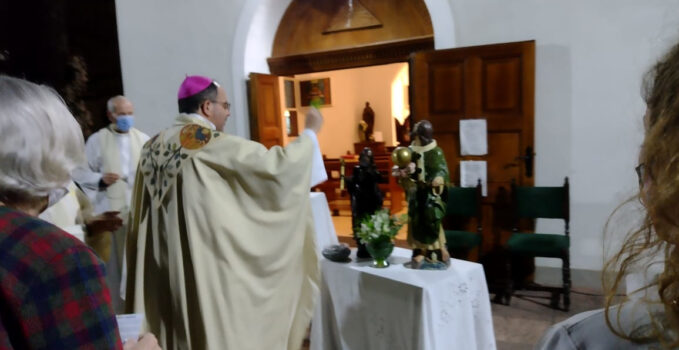 On this Covenant Day, September 18, Auxiliary Bishop Jorge Gonzalez enthroned in the Shrine of La Plata (the shrine under the shadow of the cathedral) the image of St. Peter, who reminds us to follow Christ and invites us to serve and love the Church, in harmony and covenant with Pope Francis who today is Peter among us. — 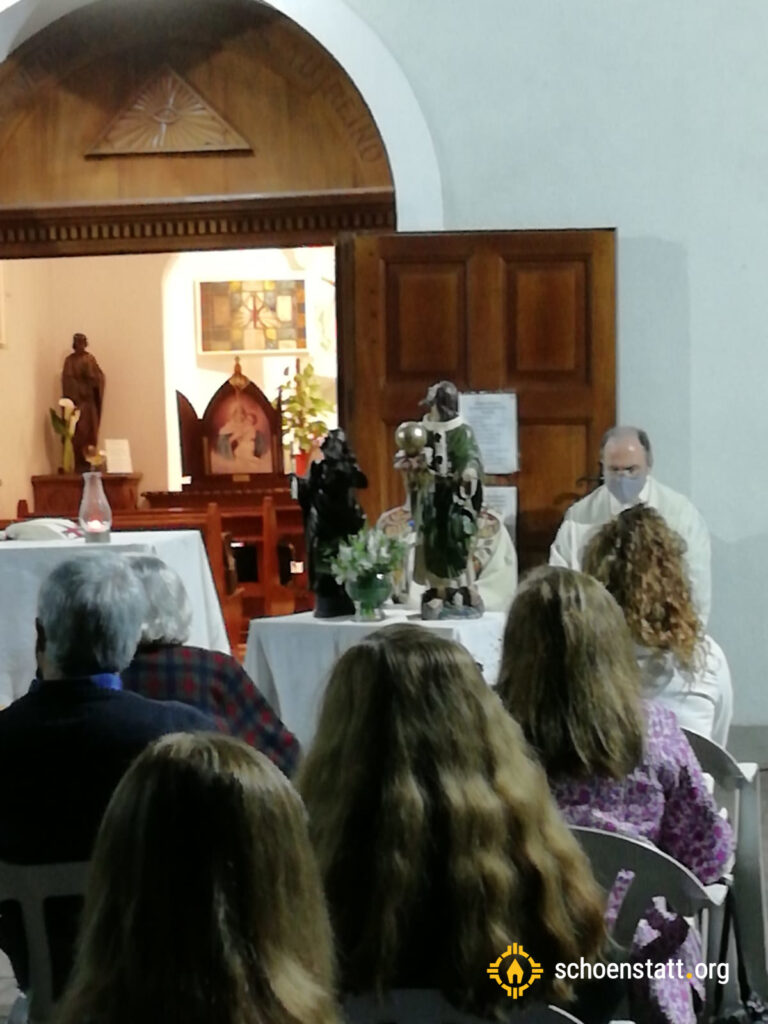 The original image of St. Peter (given by the German family in 1965) was stolen during this pandemic. But, Bishop Jorge Gonzalez at the Covenant Mass on September 18 -one year after his episcopal ordination (15.09.2020)- said: “a theft, like so many, sparked a “current of life”.”

A fact. A reading. A discernment.

These steps, said Bishop Jorge Gonzalez, are an essential part of Schoenstatt’s pedagogy. And when a current of life is formed, as a consequence of the sincere exercise of these steps, moments are “added” that strengthen this current.

Jorge received, in Germany, months before the robbery, as a gift, an image of St. Peter just like the typical size of the images of the shrines.

“A new “image” given to the first Argentinean Bishop of Schoenstatt, son of this Shrine of Liberation, also built by a bishop in his own gardens, under the shadow of the Metropolitan Cathedral, a clear expression of a mission: Schoenstatt, heart of the Church, Schoenstatt for the Church”, said Bishop Jorge.

A feast under the shadow of the shrine 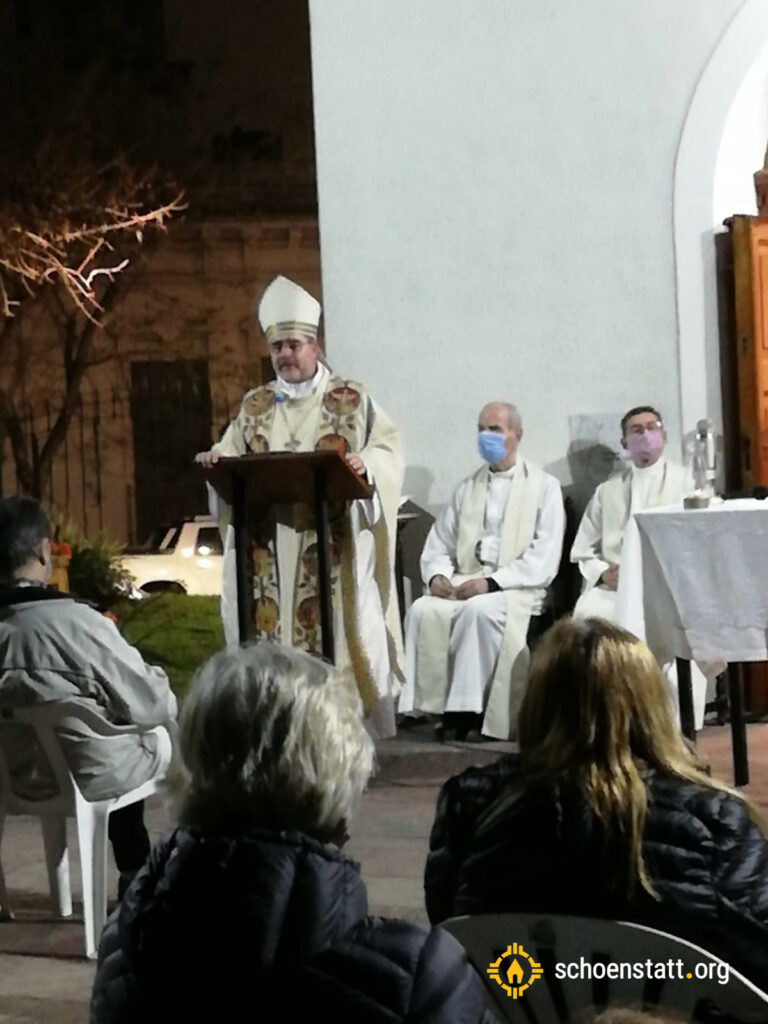 All this current of life, all the preparation with contributions to the capital of grace in the form of small keys, a triduum in the previous days – all this was transformed into a feast on the evening of September 18. Beautiful Mass, many people, the youth choir, the joy of being present. Almost two hours between Mass, greetings and blessings. Moments of grace and family. Fr.Javier Arteaga, Fr. José María Iturreria, Fr. Rogelio from the first course of the Federation of Priests of Argentina, concelebrated.

It is always a joy to celebrate Covenant Day here in the shrine, said Bishop Jorge González, and especially in these days of high tension in Argentina. To prepare hearts for the “after” of the long-awaited enthronement of the image of St. Peter, in his homily he discussed a double matter: “Simon Peter called and transformed by Jesus” and the Peter among us today: “the successor of Peter in the mystery of the Church”: Pope Francis. 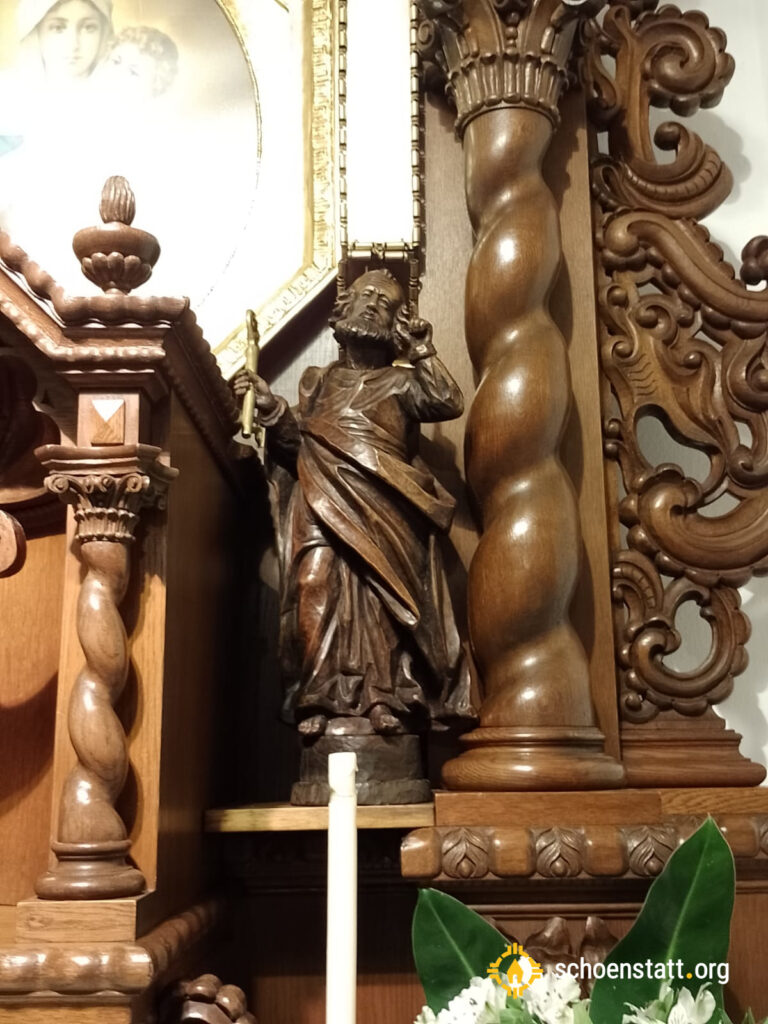 St. PeterThe fisherman of Galilee “was called in extraordinary circumstances, on the occasion of the first miraculous catch of fish in the lake. So we can think that Peter had the gift of knowing Jesus as Lord very well, being also the first to be called when he went up the mountain and proclaimed the name of the twelve.

Sometimes Peter was also instructed apart, with care, by Jesus… we can say that he had a special care for Peter; he gave him a special entrustment when at Caesarea Philippi he gave him the promise of the keys of the Kingdom of heaven”.

But Peter failed many times… and humanly, “he does not deserve trust, he did not live up to his role, he was a lousy leader of the Church in difficult times, he abandoned others, he fled, he publicly denied…”. And what did Jesus do? Jesus restored Peter’s trust. He does not simply give confidence, but gives it back to him, because Peter lost it even in himself. Jesus gives it back to him by leading him to the key question of love. Thus Jesus shows himself to be the Gospel for Peter. He questions him about the reality that in Peter is deeper and truer, he goes to dig into the depths of his soul (Fr. Herbert King) and to look for the best that is in him (Fr. Kentenich’s pedagogy), Jesus knows that Peter never lost it in spite of everything.

The enthronement of the image of St. Peter becomes a task, a mission for us, stressed Bishop Jorge:

“Every time we enter the shrine and look at the image of Peter we must evoke all this: to “return to the Gospel”, to recognize that love is the heart of the Gospel, of Jesus’ message. And we must always return to Jesus and his message. We often run the risk of losing focus and forgetting what is most important”.

The Successor of Peter in the Mystery of the Church: Pope Francis 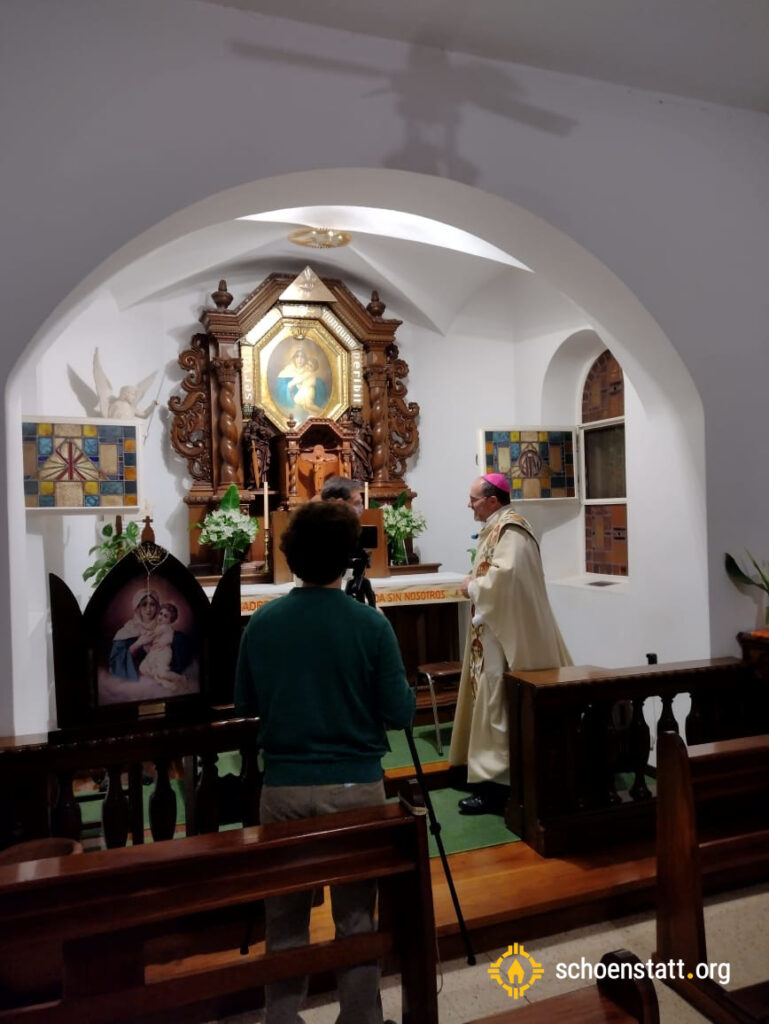 But it is not only about the Apostle in his time, but when enthroning, when having the image of St. Peter in the shrine, we are called to ally ourselves with “Peter today among us”, with the Pope, with Pope Francis.

Sometimes we Argentineans have such a poor view of the Pope, because of nonsense, he said, and so we lose sight of the magisterium of Francis that he not only exercises in what he says or teaches, but also in his gestures and “a way of speaking that is helping to bring closer and make more tangible the doctrine of the Church”.

He showed three key features of this magisterium: mercy, synodality, links with nature (Laudato Si), with others (Fratelli tutti).

“Synodality “is the path that God expects from the Church of the third millennium.” Synodality is a journey together; the faithful people, with the episcopal college, and with the Bishop of Rome: “each one in listening to the others; and, all, set in listening to the Holy Spirit”. This is easy to express in words, but not so easy to live”.

“The only option in the face of the world’s pain and people’s wounds is to follow the model of the Good Samaritan, who helps a wounded man without caring who he is, what he thinks or where he comes from. The Pope asks to recognize the innate dignity of every person, who in any case deserves to be recognized, valued and loved; regardless of his ideas, feelings, practices or sins”.

And the consequence, so that the image of St. Peter in the shrine is not just something decorative:

“Every time we enter the shrine and look at the image of Peter we should evoke all this: as Fr. Kentenich did in front of Paul VI, in the context of transformation of the Second Vatican Council. Father Kentenich promised the Holy Father the loyalty of the Schoenstatt Work to the Church and that the Movement would commit all its strength to help the Church to fulfill its present great tasks in the post-conciliar period. We continue on this road…, and this commits us even more to embrace in cordial harmony and with renewed enthusiasm, the road that Francis proposes to us in his magisterium”.

How to welcome someone who is at home? 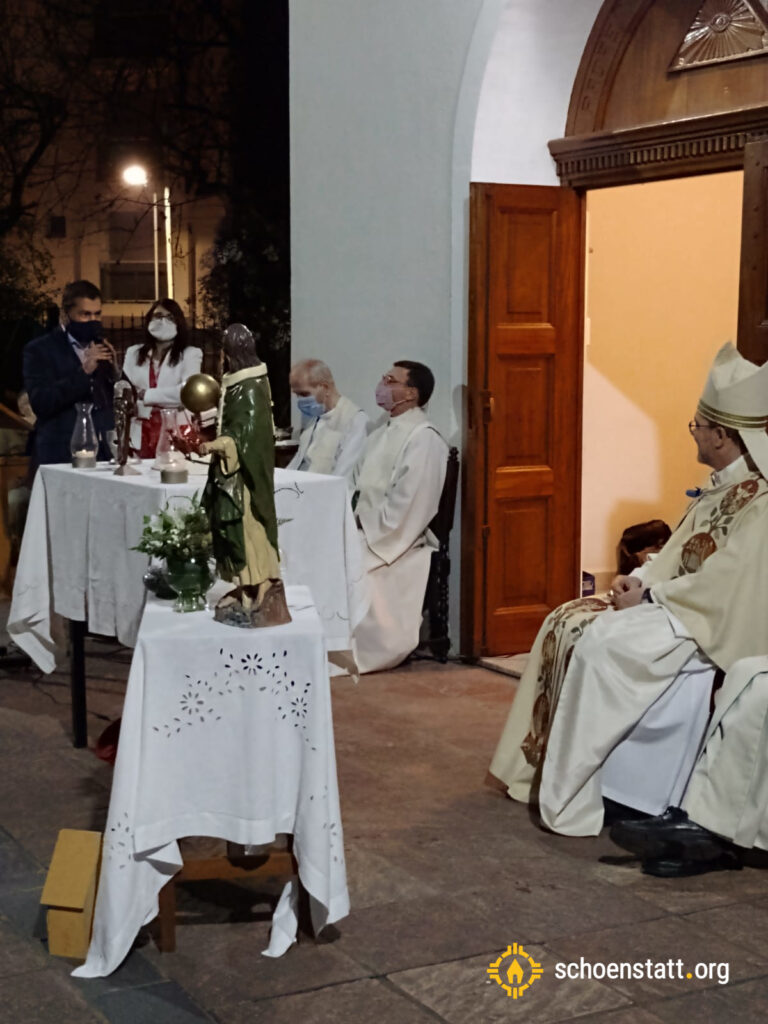 After the Mass, Bishop Jorge Gonzalez, accompanied by Fr. Javier Arteaga, took the image of St. Peter to the Shrine to put it in its place.

There was a great applause…before continuing with the renewal of the Covenant of Love.

Before the final blessing, Anita Moviglia and Osvaldo Marcozzi, members of the League and diocesan coordinators, thanked Bishop Jorge. It was very nice when Osvaldo turned to “Father Jorge” whom he had known since “that camp” and told him that he had been asked to welcome him; but it felt impossible – how to welcome someone who is at home?

“Jorge” is part of the life of many. Before being a priest, after being a priest. His work in City Bell was well recognized, and when he returned to the cathedral during 2019 we accompanied him with another couple from the League in the pre-marriage talks. This year these talks were suspended due to the pandemic. And many of us have always collaborated with his initiatives.

He is “our” Father Jorge, “our” Monsignor Jorge. 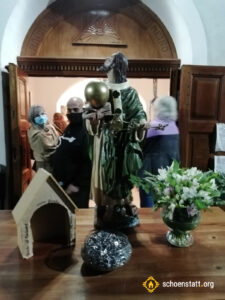 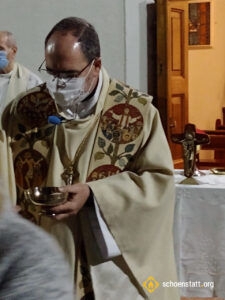 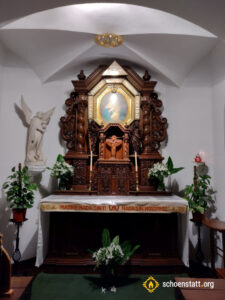