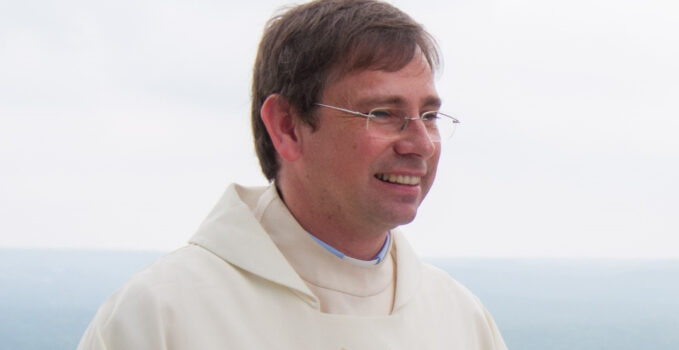 On the night of 6 January, still during the Christmas season, Fr. Tiago Frescata, a young Schoenstatt Father in Portugal who was ordained in 2004, passed away. He had recently worked in Chile. A few months ago, he learned that he was terminally ill (due to a brain tumor diagnosed in 2019) and returned to his native Portugal “to die.” —

After his priestly ordination, he spent two years serving in Santiago de Chile and returned to Portugal in 2006.
He became the director for the Schoenstatt Boys’ Youth and the chaplain at Santa Maria College. His presence influenced a generation of youth, who are today active members of the Schoenstatt Family. Through them, he also reached their families, many of whom belong to the adult branches of the Movement.  Among other things, Fr. Tiago also promoted the “I Believe” program ahead of Pope Benedict XVI’s visit and the “Catholic Family Missions.”

In order to remember him and give thanks for his service, we publish (for the first time in english) the article written by Fr. Alberto Eronti on the priestly ordination of Fr. Tiago Frescata in 2004.

“31 years ago, I had the joy of baptizing him, and today on 17 April, I have the joy of attending his ordination.”

On 17 April [2004], a great event moved the Schoenstatt Family in Portugal: Deacon Tiago Frescata, was ordained at Santa Maria de Belém Church in Lisbon. He received the Sacrament of Holy Orders by the laying of hands from the Cardinal of Lisbon and celebrated his first Holy Mass on 18 April. Fr. Alberto Eronti, who is currently working in Rome, attended the Ordination Mass of the baby he baptized 31 years ago

In his account of the event, we read: On 16 April, I left for Lisbon at the invitation of Tiago Frescata’s parents to attend his ordination to the priesthood. 31 years ago, I had the joy of baptizing him, and today on 17 April, I have the joy of attending his ordination and receiving him as a brother into the priestly Family on Mount Sion.

Luciano, Tiago’s brother, was waiting for me at the airport. We traveled together to the place where the shrine is located and the house of the Schoenstatt Fathers, a few meters from the Tagus River. I immediately went to the Shrine where I had the joy of spending a little time in prayer, recalling and giving thanks for the time that I was able to work as a priest and serve the Family in Portugal in 1972/73. Then, people began to arrive for the Mass that is celebrated daily at 19:00 and the greetings were endless. It was a reunion with the Lisbon Family after six years.

Moments that touch the heart of the priestly life

On the 17th, the dawn brought rain but nothing could prevent the normal unfolding of the day’s program. At 16:00, we were all dressed in the sacristy of the Jerónimos Church, a real artistic treasure on the banks of the river. In addition to the diocesan priests, 14 priests of the Sion Community concelebrated with Cardinal José da Cruz Policarpo. The Lisbon Family and the rest of Portugal were present and participated intensely and joyfully in the ceremony. A highlight was the Schoenstatt youth choir and their active participation. The Liturgy of the Word, appropriate to Easter, was fitting for a deep and clear reflection about the priesthood. As is the case in every ordination, there are particularly emotional moments that touch the heart of the priesthood: the laying of hands, the embrace of the newly ordained man with his brother priests, the first consecration by Fr. Tiago, sharing for the first time as a priest in the Body and Blood of Christ…

The importance of priestly vocations – “Door to Europe”

At the end of the ceremony, which lasted two hours, the congratulations for Fr. Tiago were endless and everyone was overcome with joy. Tiago’s family has been a part of the Schoenstatt Movement since his parents’ wedding and they greatly enjoyed what we were experiencing. It was undoubtedly a day of immense joy for the members of the Institute of Our Lady of Schoenstatt, who watched Tiago grow up. The whole Family, and the Schoenstatt Youth in particular, prepared and experienced the event with a special joy. Now there are four Portuguese Fathers working in Portugal and Fr. Tiago will join them in two years! Personally, I believe that the Schoenstatt Family takes root and grows in a country based on the number of domestic vocations. In this regard, I am very impressed with the work that is being done in the Boys’ Youth. A task that is helped especially by the “Door to Europe” group. These are a Chilean youths and one Mexican who have been working apostolically in Lisbon for a year and are part of a larger collaboration project between Latin America and Portugal, Spain, and Italy.

Consecrating the priesthood to Mary

The next day was Sunday and Covenant Day, when Fr. Tiago celebrated his first Mass. The Mass took place in the building of the Institute of the Ladies of Schoenstatt. It was meant to be outside, but the rain prevented this from happening. Nevertheless, everyone was able to fit into the house chapel and adjoining rooms. The youth choir were once again a highlight. The Mass was simple but deeply emotional. The homily, by Fr. Diogo Barata, was so personal, so warm, and brotherly that it touched us deeply. Equally special were Fr. Tiago’s words and gestures of gratitude to his parents and siblings, and in his final words of thanks, he recalled all those who helped and accompanied him on the journey to the priesthood. After the Mass, we went on pilgrimage to the Shrine, where Tiago consecrated his priesthood to the Blessed Mother. Then he gave his priestly blessing to each person present.

At 14:00, a large number arrived at the Frescata household in a small town 25km from Lisbon. There was room for everyone in the dining room, where round tables were carefully prepared. After lunch and dessert, there was songs, jokes and various stories about the recently ordained priest. Marcos, Fr. Tiago’s younger brother prepared a poster with photographs: “Tiago at age two and today.” The photo of little Tiago was very cute. The other had been taken that morning before Mass. Some jokes about the young Tiago made us laugh and gave as a fuller picture of him: a determined personality and freedom of conscience. We returned to Lisbon as the sun was setting, with a joyful spirit and a thankful heart. The Blessed Mother has been crowned by another son and the Father of the Family has a young heart ready to live and radiate his paternal priesthood.

On 17 and 18 April, a candle was lit in the Original Shrine with a silent prayer that he will be blessed in his priestly ministry.

Today, on 7 January, a candle was once again lit in the Original Shrine. 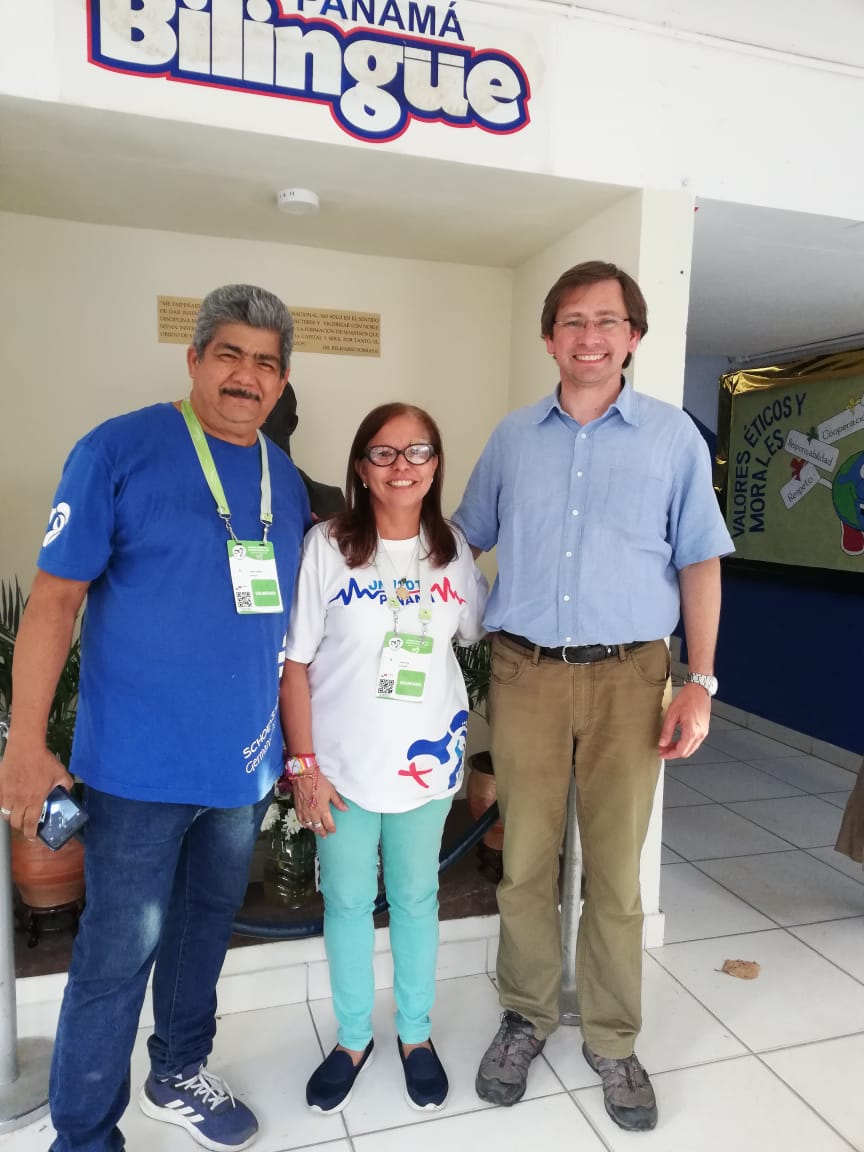 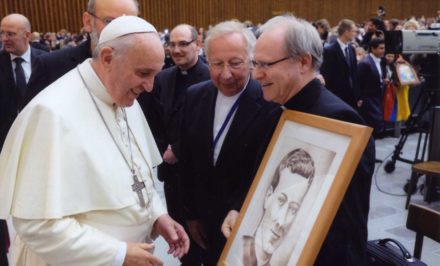