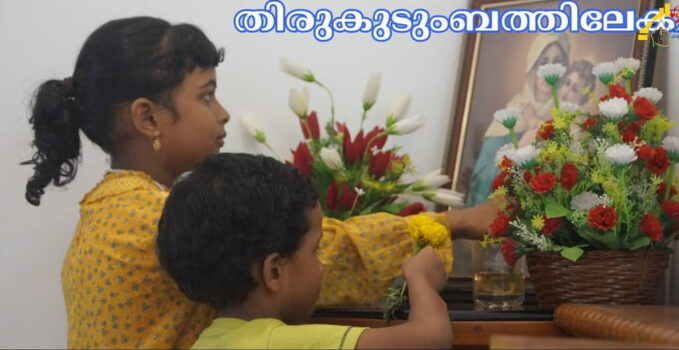 SALTT – Schoenstatt Academy for Life Transmission & Transformation is an initiative of Schoenstatt Fathers to educate the youth and cultivate their talents in various fields of arts and music. It has been eight years since we started this institution and we are happy to inform you about the great years that we have had while building up the talents of our youth through various activities. SALTT thus aims to promote the need of arts in children and youth’s life through integral growth of personality. Two fathers are working with this institution. Fr Bibin Parambi ISch as director of SALTT and Fr Sajan Puthur ISch as associate director of SALTT. —

The following are some of the activities that we have conducted so far.

Summer Camps at the Parishes 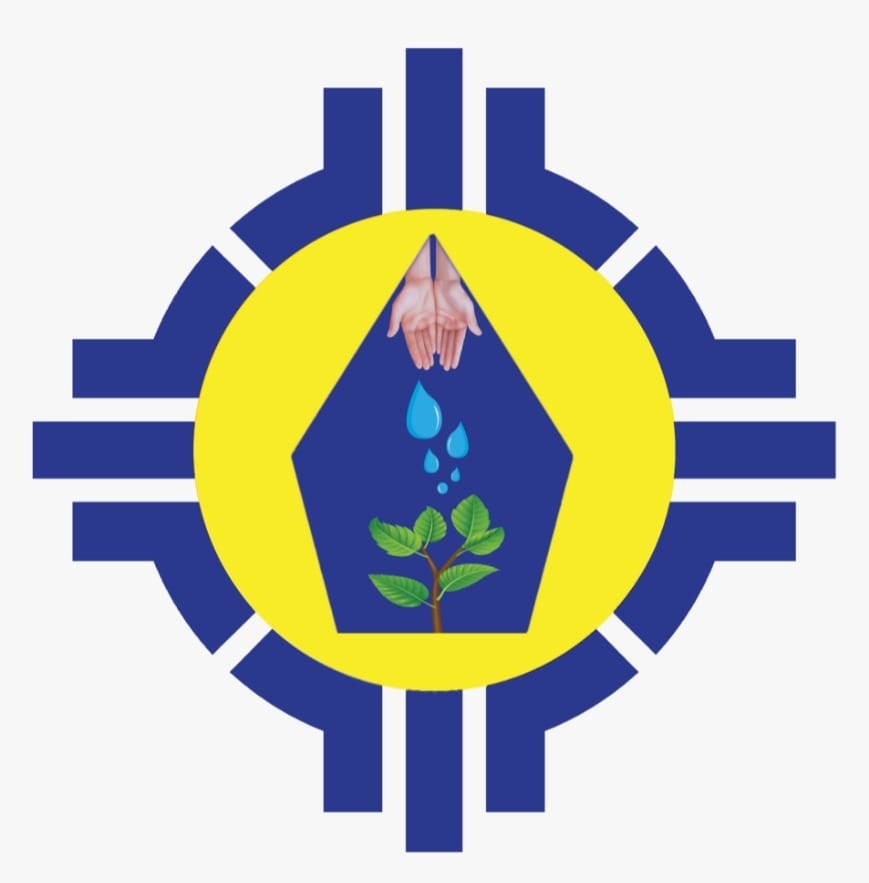 These camps are conducted with the aim to promote youth leadership qualities where debates were conducted on contemporary issues related to the youth and various group activities and personal sharing.

The focus of this convention was to motivate the youth to take up the present challenges of the society to live the Christian faith with conviction. It offers different opportunities such as shrine experience, understanding Schoenstatt history, and covenant of love with blessed mother.

Mothers group were formed and mothers were given training in various fields such as tailoring, craft works and cooking etc. The necessity of empowerment of women in society was emphasized.

“Christmas” is the season of Joy and to keep up that Joy and happiness, we conduct Carol competition every year in front our Providence shrine. Many  teams from different parishes come to participate in it and it is a regular program during the Christmas season.

It could not be conducted in front of the shrine this year due to the situation with Covid 19. Therefore, we came up with an idea to conduct it online and we had many teams from different places across India this year. All their videos were published on our YouTube channel ‘Schoenstatt Media’ on 22nd of December 2020. Thousands of people watched it and expressed comments about the competition. The results were published on January 2nd, 2021.

“Christmas is not about receiving but about giving”. SALTT celebrates Christmas every year with the poor people from the nearby orphanage and old age homes. Schoenstatt Youth takes up the leadership along with the mothers group to conduct it meaningfully. They do this by finding financial help for other people, cooking Christmas meals and arranging cultural events for those people. As we couldn’t organize the program in our premises this year, we instead visited all of them and offered the Christmas gifts and cakes. This gives a really good message to our youth that Christmas is a season of Joy to all equally.

Establishing the covenant of love with our blessed mother is always a symbol of Schoenstatt. SALTT took the initiative to guide the students of Schoenstatt Academy to establish their covenant with Mary by explaining all the Schoenstatt history and also about the specialty of Mother Thrice admirable and her shrine. All of them prepared themselves and sealed the covenant. Every year, the covenant is renewed, by reciting the covenant prayer and believing they are the Children of MTA and she would always guide and protect them.

Schoenstatt youth under SALTT is again guided this year to seal their covenant with Mary. In the beginning it was an online preparation. Later they came together once a week. All of them prepared their own capital of grace and are preparing themselves and eagerly waiting to establish their covenant of love soon this year. The video shows the fathers in one of the talks for the students who are preparing online for sealing the covenant of love.

SALLT celebrates the festival of Kerala too. All get together with the traditional Kerala dresses and different activities and plays are organized. The  tasty dish ‘Payasam’ is served and floral carpets are laid out as a part of the festive season…It is a time of great happiness. This year it couldn’t be celebrated as before, but we hope to get together next year. 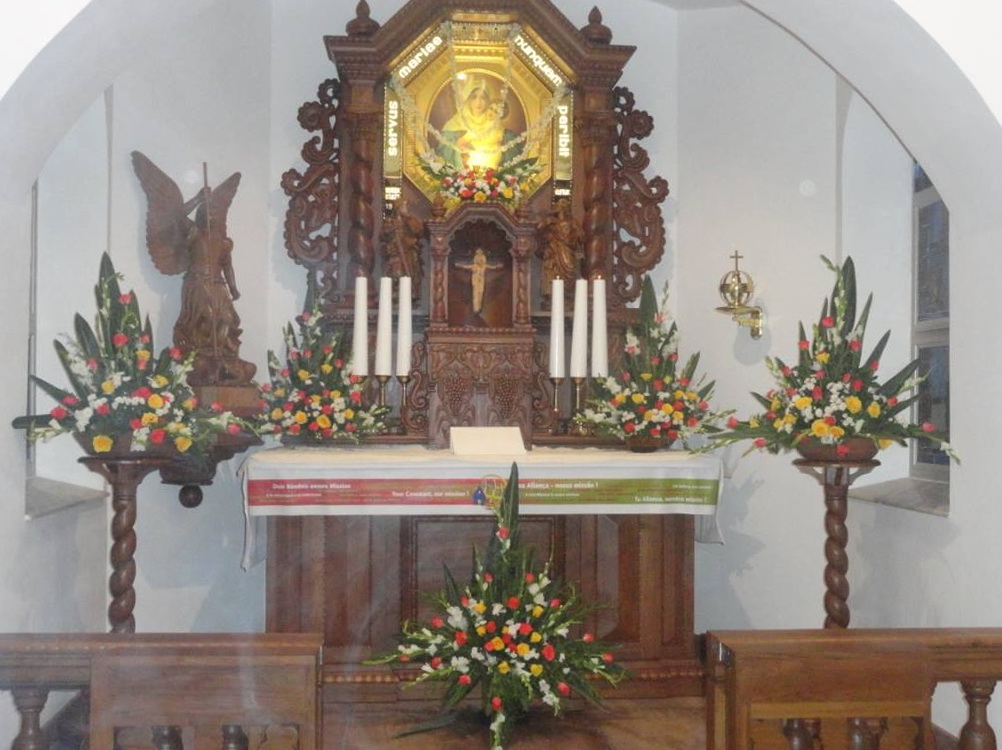 We also didn’t give up during this pandemic and so began our next creative ideas during these months and thus this year became a graceful year for our initiatives. First, we sought the grace of the MTA by participating with Schoenstatt International in Corona mater and crowned our Virgin Mother as the Queen of Health. We believe that she will always guide us and from there, we bring up our initiatives well.

Some of our works during this pandemic are:

Schoenstatt media YouTube channel has given us a very positive side during this pandemic time as all the programs which we do are launched and published through it. This Channel is maintained by SALTT and is based on all the youth programs.

We conducted thirty-one days reflection about Mary during the month of May. It was a different experience for us in which our youth could get to know more about our Mother Mary as they presented a talk about her every day. Thus it turned out to be a spiritual experience in coming more close to our dear Mother. All these talks are published on our YouTube channel “Schoenstatt Media”. Most of the videos were recorded from inside the shrine and therefore all who watched the video came to know about the Schoenstatt Shrine and Mary who dwells in it.

There is a tradition during the Month of October where we get together and recite the rosary to our blessed mother. But due to this pandemic, people could not get together for this. So, we started a Tribute dance program to Mother Mary in October and we are hoping to continue it. Most were ready even from different parishes to show up their talents by dancing to devotional songs of Mary in different languages and we uploaded it on our YouTube channel ‘Schoenstatt Media’. This is a new initiative to build up our devotion and a beautiful way to thank our Mother.

And a dance by the boys’ group with a famous song Jerusalema.

As we all know Mother Mary has appeared in different places and we have many Feasts in her name, so we thought of a new way to let the whole society know about all the specialties of her Feasts. Not only the small youth group of SALLT but it became an initiative to add new members to the Saltt family. Many were ready to introduce all the feasts of Mary. We started it in the month of June and are continuing it still. We have almost completed 30 different feasts of Mary and every talk regarding these feasts are published on our YouTube channel. We are happy for those who presented. And almost all these talks are recorded from our shrine so that the people get a glimpse of our shrine interior through these videos.

Video on the life of Fr Joseph Kentenich

We produced a video based on the life of Fr Joseph Kentenich in English with Spanish subtitles this year on the 18th of October. Three girls spoke about his life and a mother and child enacted the famous event from his life that of his mother dedicating him to the blessed mother in his early childhood.

Schoenstatt Status Video on every 18th

We produce status videos every 18th of a month to promote Schoenstatt spirituality through mass media. It is a combination of a small prayer and a song.

This year we appeared for a dance competition as well. It was conducted by Faith Mission to promote mission consciousness among the youth, which we contributed to.

Tribute to the whole Health Department

It has been a really a tough time for all of us because of this pandemic. But the people who need to be appreciated and honored during this period are the Health workers. Keeping this in mind SALTT launched a cover song as a Tribute to them. SALLT youth sang the song and they came across a good experience of a meaningful song. This cover song was published through Schoenstatt media YouTube channel.

We had produced an animation video about the Schoenstatt Shrine as well.

One more short film is on the way and it is in the post production process.