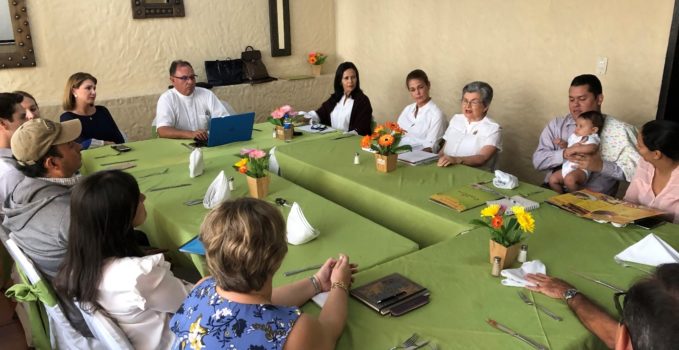 El Salvador on the eve of the first National Conference

On Monday, February 4th, Father José Luis Correa Lira, advisor to the Movement in Central America, had the first organizational meeting with some representatives of the Branches and Communities’ different groups of the flourishing Schoenstatt Work in this small, but warm country of El Salvador. Patricia Fernández and her husband Isidro Perera, members of the third Course of Apostolic Federation of Families of Costa Rica, have been coordinating the development of the Movement and its different Branches in the country. Now the first National Conference of the El Salvadoran Schoenstatt Movement is being prepared. —

It was possible to share with members from each of the three groups of couples, ladies from the young professionals, Madrugadores, and the Pilgrim Mother Rosary Campaign— a group of eleven people that are already working on different fronts to guarantee a successful conference on May 1st.

The Virgin Mary and Pope Francis

It was an intense day of work that began with Holy Eucharist at 9:00 a.m. at Divine Child parish, where a good group from the Pilgrim MTA’s participated (in El Salvador missionaries of the Campaign are called this and there aren’t any men— not yet—) and women belonging to the second group of the Mothers’ Branch. “It was a great gift to have been able to live the Covenant of Love of one of our missionaries during the Eucharistic celebration,” commented Ana Mercedes Gutiérrez, coordinator of the Schoenstatt Rosary Campaign in El Salvador.

After the celebration, Father Jose Luis gave a pleasant talk entitled: “The Virgin Mary and Pope Francis.” This took place at the end of the afternoon for Groups 1 and 3 of the Ladies’ Branch, “a very complete, very pleasant, very current talk especially for those of us who are new to Schoenstatt’s spirituality and pedagogy. It allows us to begin into learning more about the importance of the figure of Mary,” commented Karen Dada and Agnes Dutriz from Group 3. 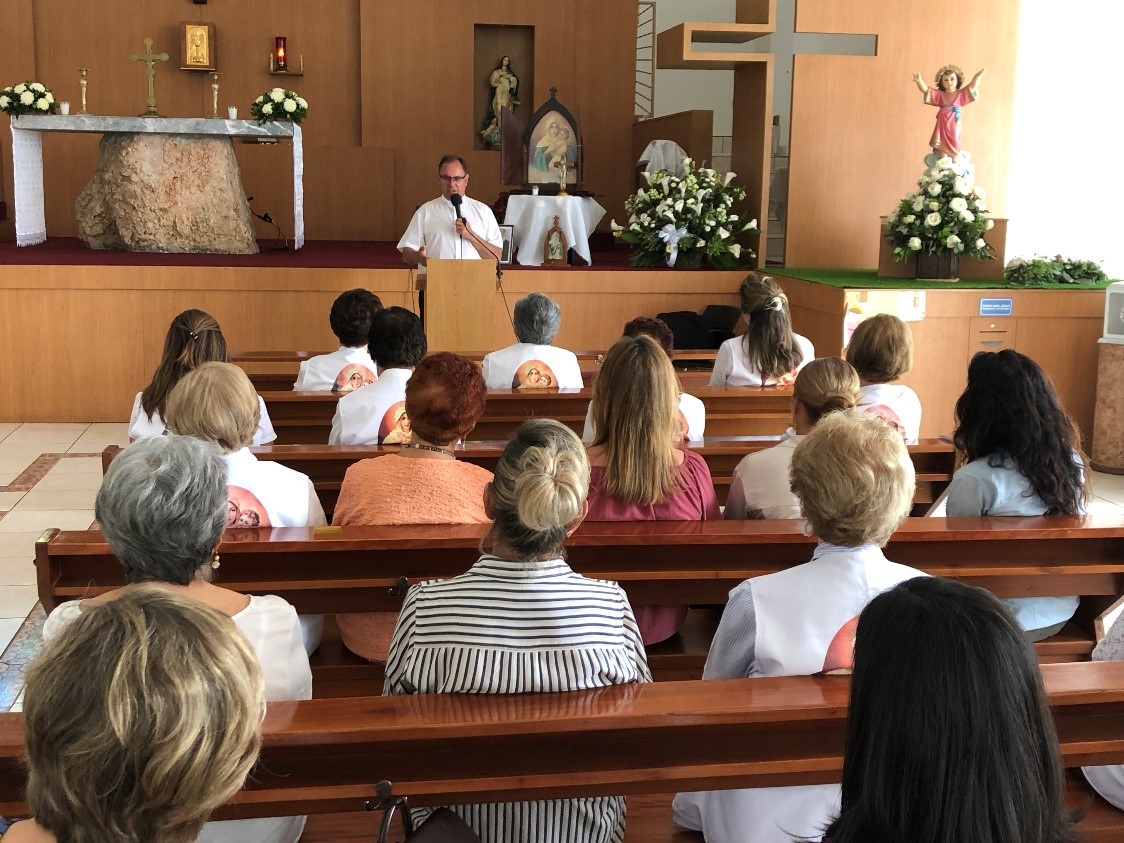 Talk for Mothers and Missionaries of the Schoenstatt Rosary Campaign

At 6:00 p.m., the Movement’s Director in Central America took the opportunity to sit down with a group of eleven young professional men and women in an informal atmosphere along with a cup of delicious Salvadoran coffee, and with the theme: AND NOW WHAT? Following Synod2018 and WYD Panama2019.

In this conversation with the young adults, Father José Luis highlighted, among other things, the recent reflection the Holy Father made at the closing of WYD in Panama: “We can tell you with the confidence of our children: Mary, the ‘influence’ of God. With few words, she was encouraged to say ‘yes’ and to trust in love, to trust in the promises of God, who is the only force capable of renewing, and making all things new. Thus today, all of us have something new to do interiorly in letting God renew something in my heart.” A powerful message that touched and ignited the hearts of these young people who, with perseverance, have been forming themselves in our pedagogy and spirituality for some eighteen months now, and are reflected in Lee Aguiñada’s comment shared with us: “The visits of Father José Luis Correa will always be revitalizing. For us as members of the Young Professionals of El Salvador’s Schoenstatt, having Father’s guidance and support is very important because they connect us more with the Movement and with the Church. During this recent visit, we were able to reflect on Pope Francis’ messages at the Youth Synod and in Panama at WYD 2019. At this moment, we have the challenge of being the protagonists —each one in their situation, because we are God’s now and we want to be, like Mary, God’s influencers.” 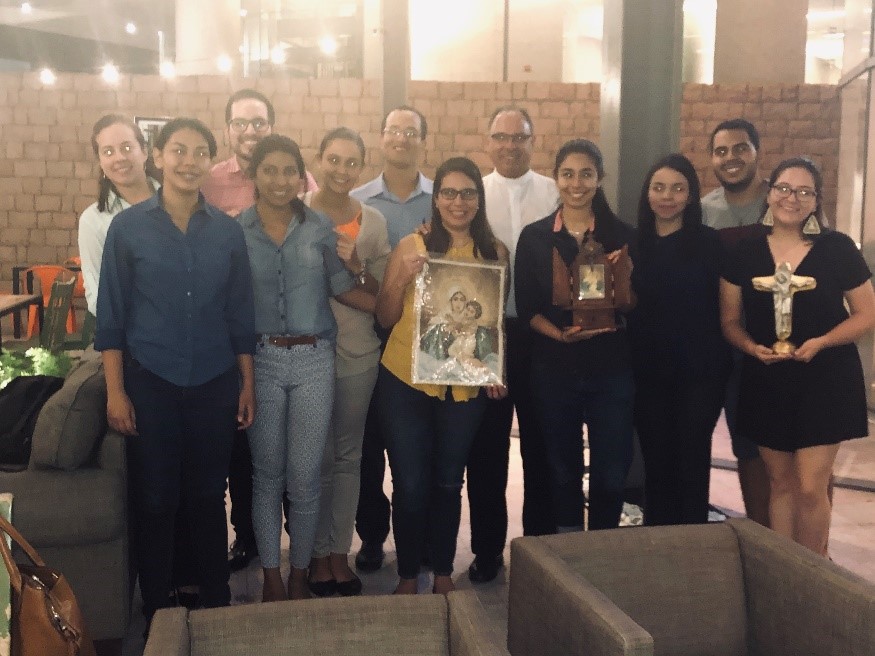 Married we can be saints

To close the day at Mr. and Mrs. Nasser Mayo’s house and with a majority of the couples belonging to the three existing groups present, we reflected on the theme: “Married we can be saints” that allowed us not only to address this that was so vital to the formation of marriages, but also gave the opportunity to the marriages of those in the three groups to get to know one another and be able to develop bonds. For the first time, they shared outside their normal training circle.

“What a nice meeting yesterday! It is incredible how even though we didn’t know most of them, there was an atmosphere of fraternity! The talk of Father José Luis was very clear and full of enthusiasm! First God— see you May Day,” said Diana de Mejia from the couples’ G3.

Many positive experiences were left by this encounter with couples:

“This talk helped us to reinforce an important aspect of marriage: the search for sanctity that is achieved based on love and respect, with Jesus Christ at the center and the Holy Family as a model to follow.  We were delighted that he used real and current examples of marital sanctity that motivate us as a family to follow in his footsteps,” said Rubén and Camila Aguilar, members of the second group of couples that have already begun their formation eighteen months ago.

Young couples with babies at the meeting

We were very surprised when it came to the couples of the couples’ groups. We were struck by the commitment and desire for formation they demonstrated in the meeting at the Nasser’s house. Seeing young couples carrying their babies to the meeting showed us that commitment.

“The couples’ G3 received us warmly as if they had known us for a long time. This is how the Blessed Mother works. We are very excited about this apostolate,” commented Jose and Lorena Perdomo, members of the 3rd Course of Federation of Families, who recently joined their brothers in this apostolate in El Salvador together with the Pereras as Monitors for Couples’ Group Three. 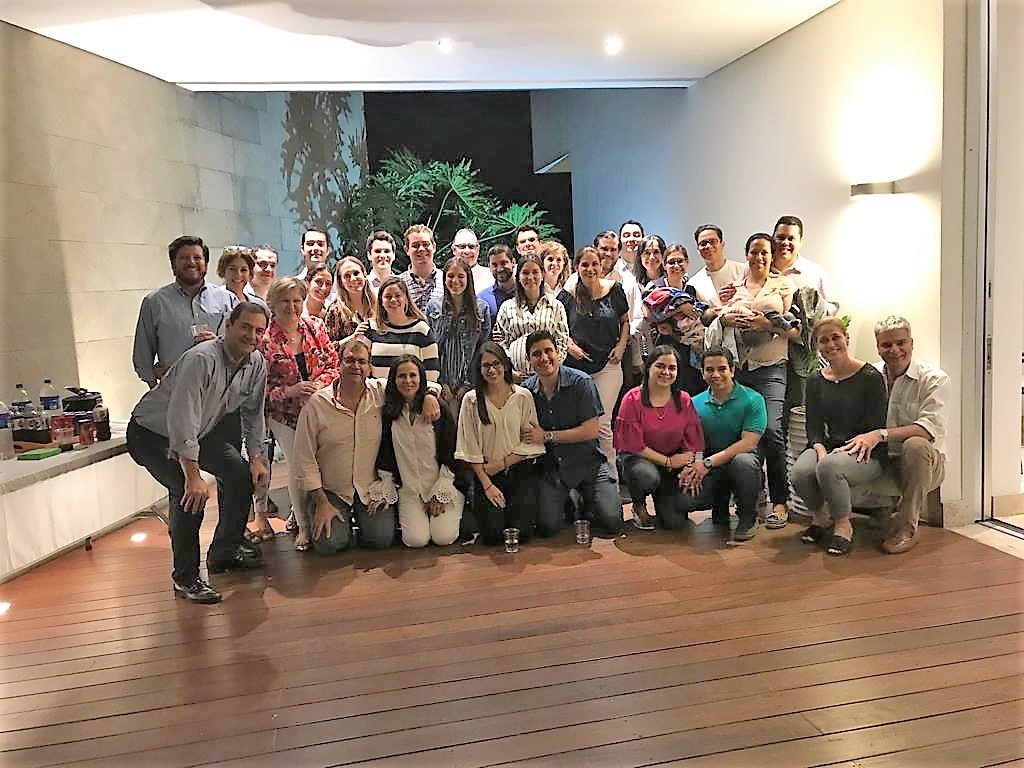 Participants in the talk for married couples 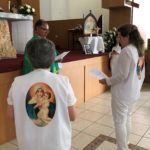 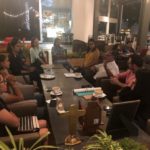 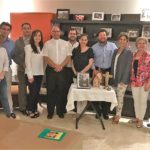 Contact with the Pereras and with Schoenstatt in El Salvador: [email protected]