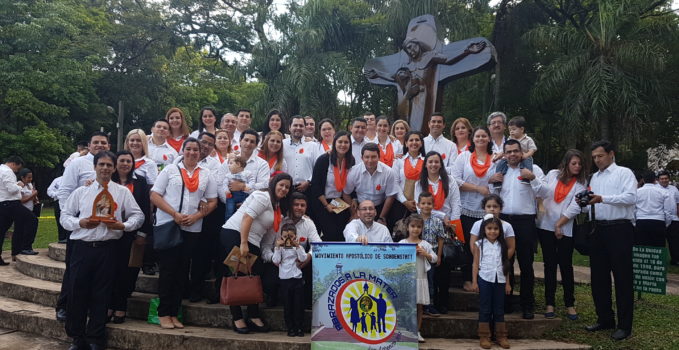 Sometimes a random act, that is somewhat trivial, like googling “Help for couples in the Schoenstatt Movement” leads us in ways God has prepared for us. This is how I got to know the Blessed Mother and a transformation of my life and family began, albeit with some stumbles and interruptions. —

We had reached the level of the Family Branch Covenant, but looking back, I realized that had been made possible through many people I met in the Movement. Today I clearly understand they were the Blessed Mother’s instruments that worked in our lives.

I am still in contact with some of those people and not with others. That’s why this narrative, more than anything, is an expression of gratitude: to our Mother, who has always been with us and to the person who attended to my message, on a Saturday afternoon in 2014, when I found “Help for couples in the Schoenstatt Movement” while googling. Since that day, Schoenstatt changed my life. I did not notice it at that moment, but definitely everything changed in the way God wanted so that today we could be a part of the Movement, and then even more the “Yes” we gave on the day of our commitment, on Saturday, 4 November, at the Tupãrenda National Shrine.

That commitment was the fruit of meetings, encounters, talks, and learning. Being realistic, it was a short but profound time within the Movement, and we still have a long way to go. However it is not time that measures the importance, rather it is what we do in that time and space, how we live and understand it. Ultimately, it is measured by commitment.

Round trip to the Movement

After Karen’s (the one who answered me) 2014 message, she put me in contact with leaders from the diocese of San Lorenzo. We joined the Family Branch for the first time; we went to a few meetings, but after a short time, we left the group and the Movement. I believe that I was still unprepared; I was not ready to give it everything. I came to realize that God does not want lukewarm hearts.

The Blessed Mother let me go. At least that is what I thought, but during that time, she people who always spoke to me about her love, my husband was among them, and his faith moved mountains. Those people made me understand that my place in the world was with her. It took me a year and a half to understand it, and to walk again within the Movement. The Blessed Mother had not let go of me all during that time. Instead she, like every merciful mother, continued praying for me and mine, so that in 2016, I would return to her protective arms with the intention of being a new woman.

In 2016, while I was at my work, I received a message from my husband. It was an invitation to belong to the Family Branch. Despite feeling a great internal emotion, I only responded: “Let’s go.”

Mary had left a spark lit within me, and the little I had known her in 2014 had been cherished in my heart. Today that small spark has grown into a large fire within me. She knew to give me this spiritual nourishment that fuels all love. Today I recognize her as my educator and trainer, she takes me by the hand and she teaches me to give it all for the glory of her Son Jesus Christ.

I am still incredibly and inexplicably surprised by how God acts. I have no doubt that there is no mistake whatsoever in his purposes or his will.