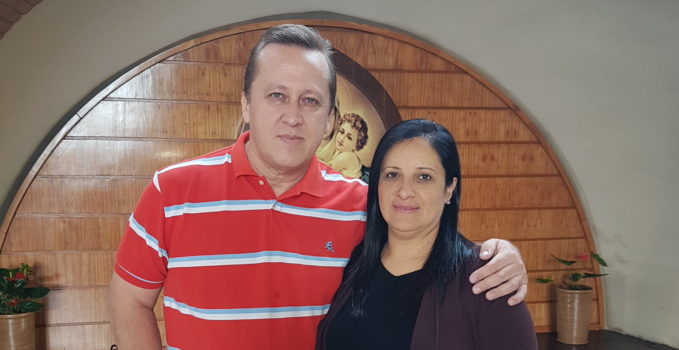 At eight months of pregnancy, Alicia and Nelson recall their moments of disillusion and discouragement as something far away. Like every newly married couple, they experienced their first days and months in the midst of emotion and with details of their own
“honeymoon”. Shortly after uniting their lives, they had the desire to be parents; it was a desire that increased more and more.

They suffered many consecutive deceptions, but they did not give up for any reason. “I would have a false positive or a miscarriage. On the latter occasion, the discouragement was more pronounced. Only Nelson and I knew what we were going through. After every disappointment, we talked about whether to continue to try or not, and with a complicit look we said, one more time! Knowing that God would have the last word,” Alicia recalls.

After every painful moment, we visited Santuario Joven (Youth Shrine) together. Those visits made us feel sustained and strengthened, from what they say, their life as a couple was never affected by these anguished episodes.

During those comings and goings, consultations, medical and laboratory tests, they contemplated the possibility of adopting. “We both knew that to be parents could happen in different ways, without the need of being biological parents. We did not discard the possibility of adopting at any time, on the contrary we saw so many needy children that we could give affection, protection, and everything that they should have as an existential right. But we always put it off because of the bureaucratic procedures until the possibility of being biological parents was really null and void,” they commented.

A year ago, specifically in April 2016, the couple decided to go to Tupãrenda, where they asked for the Pilgrim Mother of Sweet Hope to accompany them for some time in their home. They had her until 15 May, and during this time, they decided to give her all their desires, concerns, health, and moods, always asking that God’s will be done in their lives.

After five months, they received the long-awaited news. Alicia was pregnant! They were overcome by immense happiness and gratitude. All the sad moments were automatically erased, when they confirmed Mother Mary had always heard them.

The miracle of life is possible, and they are experiencing the pregnancy without complications; Alicia and her baby are in good condition and health. On his part, Nelson is a committed and exemplary husband and father.

What they heartily desired was granted to this family, who daily renew the commitment to keep the faith and never separate themselves from Mary, who with her motherly, merciful gaze becomes a light among the shadows and balm for all our sorrows and pains