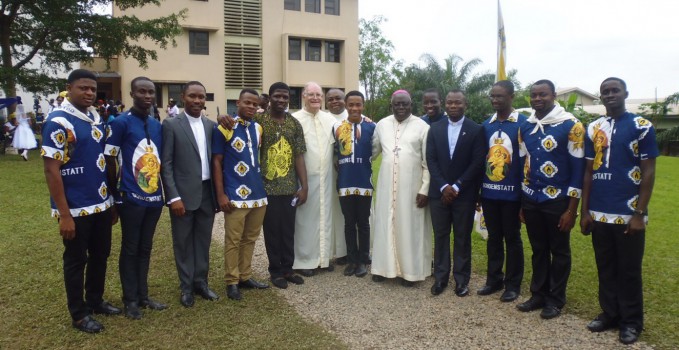 News about the Schoenstatt Fathers in Nigeria

NIGERIA, by Father Juan Pablo Catoggio, Superior of the Schoenstatt Fathers in Nigeria •

Lately a new government has been elected, as the country has lived democratically for sixteen years. Before this election, the PDP –Popular Democratic Party– governed, however this time, it lost the election. Now a coalition –the APC, All Progressive Party, is governing. Everything, the elections, and the transition occurred through a clean democratic process. The outgoing president, Jonathan Goodluck, is a (non-Catholic) Christian, the new one, Muhammadu Buhari, is a Muslim. The great dramas of Nigeria have been caused by the uncontrolled corruption at all levels, and its consequences at the moral and economic level. In addition there is the insecurity and violence, especially –but not only– by the fundamentalist terror group, Boko Haram, that commits atrocities in the northern part of the country: it kills everywhere, sweeping away neighborhoods, kidnapping little girls and women, and forcing the survivors to seek refuge elsewhere. The previous government was absolutely incapable of doing anything, and that is why the present expectations are great. Buhari is retired military; he is 73 years old, and he was a hardline president de facto –in the 80’s or 90’s. Some are afraid of a certain Islamic influence, and that he will govern dictatorially. However he is known to be morally wholesome. Two of his phrases: “If Nigeria does not kill corruption, corruption will kill Nigeria…” (It can be applied in many ways, right?) And when he took office he said: “I belong to everyone, and I do not belong to anyone.” (Meaning that no particular group would manage him.) The magic word of his campaign: Change!

At least it can be said that Boko Haram has lost considerable strength, and it is withdrawing. During the last few months, joint forces from several neighboring countries (Nigeria, Niger, Chad and Cameroon) strongly fought them, and they have suffered many casualties. 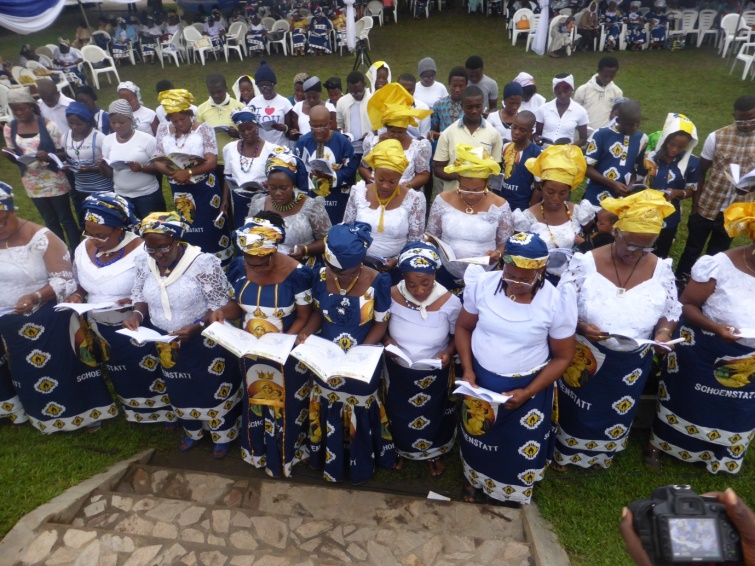 During this time, I participated in three funerals. Two of them were the parents of two priests from the community; it was something impressive. The funeral was celebrated very quickly two weeks after the person died, and generally it takes longer. No close relative can miss it, and moreover, there are many preparations. It is a family and entire village event.” Surely it is more important than a wedding or any other family celebration. Life is celebrated; the deceased is recalled and honored, and a brochure is published with a brief biography, testimonies, words of tribute from many people, etc. It is celebrated for several days before and after the burial, where everyone who comes is welcomed and has to be fed. Posters and t-shirts with the photo of the person are made, souvenirs are distributed, and the family is especially visited, everyone wearing the same fabric, men and women. When the deceased is brought from the morgue to the burial, the family and other mourner’s cry and express their sorrow. At other moments, before and after, the atmosphere is more like a feast and celebration.

Certainly this has to do with the veneration of the ancestors –and thus the profound respect for the elderly and old people is characteristic of this culture. The elderly and the ancestors are the history, memory, and the roots. In a way they continue to live in us. The Christians bury their own in their “village,” in the garden of their own home; it does not matter if they have always lived in another city or in the exterior or somewhere else when they died. In the end, they return to their land and to their origins. That is the reason one’s own land, ground is sacred –no family is without land. Another curious custom is with time the grave disappears, that is, there is no outward sign – there is no headstone, cross or inscription– simply dirt, and over time, plants grow on it and nothing indicates that there is a grave. 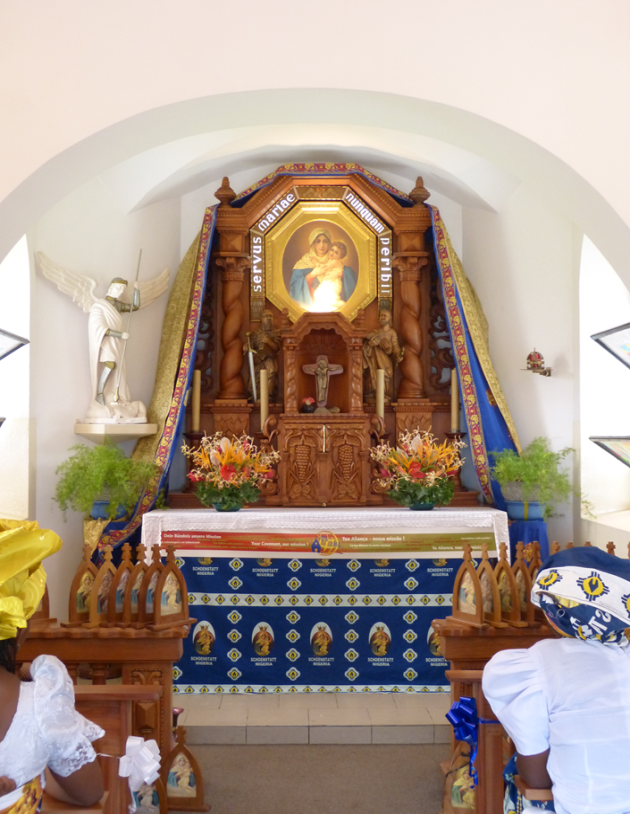 Let me tell you something about the community that will get your attention and perhaps it cannot be completely understood. During Easter week, just like every year, we had the “Selection meeting.” What is this about? Every year we receive approximately 300 or 350 letters of applications from boys who are interested in joining the community. The same thing, more or less, happens in almost all the religious communities and dioceses. Among the many of those interested, many are dismissed from the outset because of age (some are still too young or too old), or because of average school results –we demand something more than what is required to enter the university– or for other reasons.

Then we invite about thirty, no more, to a Discernment retreat: they are here for five days in which they learn something about Schoenstatt and the community, and we get to know them through different dynamics and activities, and in several personal interviews with the priests. Then we pray exceedingly to the Holy Spirit, and then we decide who will be accepted this year according to the older students’ impressions that accompanied us all that week, and the exchange among the priests. The maximum number is ten; many times we do not reach this number. Last year, I was already an “observer”, but this year I participated actively; it was truly a very powerful experience.

You probably have a thousand questions such as why are so many boys interested in the priesthood? Could it be to get out of a low social condition and to have better opportunities in life? One tends to suspect it might be. Yet I can assure you that even though that may be the case in some, it is not in many and surely not in the majority. Why then? Ultimately it is a mystery and only God knows. But undoubtedly the explanation has to be found in the profound religiosity of the people and of the families. Almost all of these boys went to Mass everyday since they were children! And they prayed the rosary as a family every night, or they talked about the Gospel! Moreover the priest is socially recognized and very well accepted, and it is surely an attractive vocation for many of them. I know that the seminarians that we have, could have a good social position and a good career if they were not here –as it does with their brothers. Another question that is asked: And how do you know who to choose or not? The truth is that in many cases, despite knowing them very briefly, it is actually clear and easy to make the decision, whether it is a yes or a no. In other cases, it is a leap in the dark, and we trust in the Holy Spirit. In any case as soon as they enter, they begin a long road of discernment. They study philosophy for four years –where they learn more about Schoenstatt in depth– before the novitiate of two years, and then they continue with four more years of theology including one more year of practicum and inner formation. 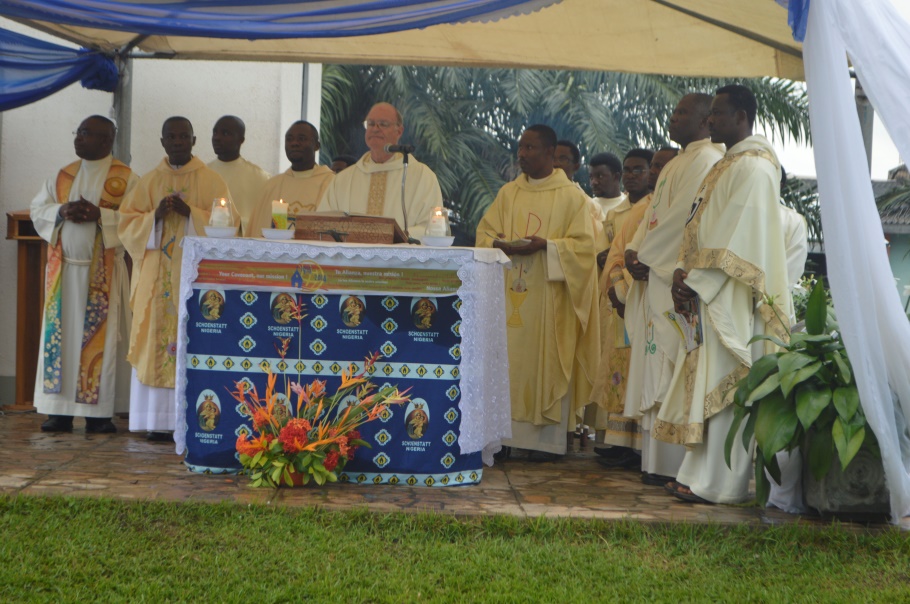 Finally, a Movement experience. In Nigeria generally the month of Mary is celebrated, and it is celebrated everywhere with great devotion. We have a special program in the Shrine every Tuesday and Thursday afternoon, and it ends with a great cantata in honor of the Virgin. This was held on Thursday, May 28, on the esplanade in front of the Shrine. The cantata began after sometime of adoration and praying the rosary in together. We invited eight choirs from the city (the seminary, the university, some parishes); they were truly very good. Approximately 400 people came on a beautiful afternoon, and our choir was outstanding. Song, music, and dance are the language of the Africans! This is how they express their faith.

Friends, I believe that it enough to share some my experiences over here and for you to know what I am doing. I appreciate your prayers; I know that many people accompany me with their prayers. Know that I feel it in a very tangible way. I also remember you very much as well, and I take you to the Shrine.

Receive my kind regards and blessing from the Shrine of Victory, your 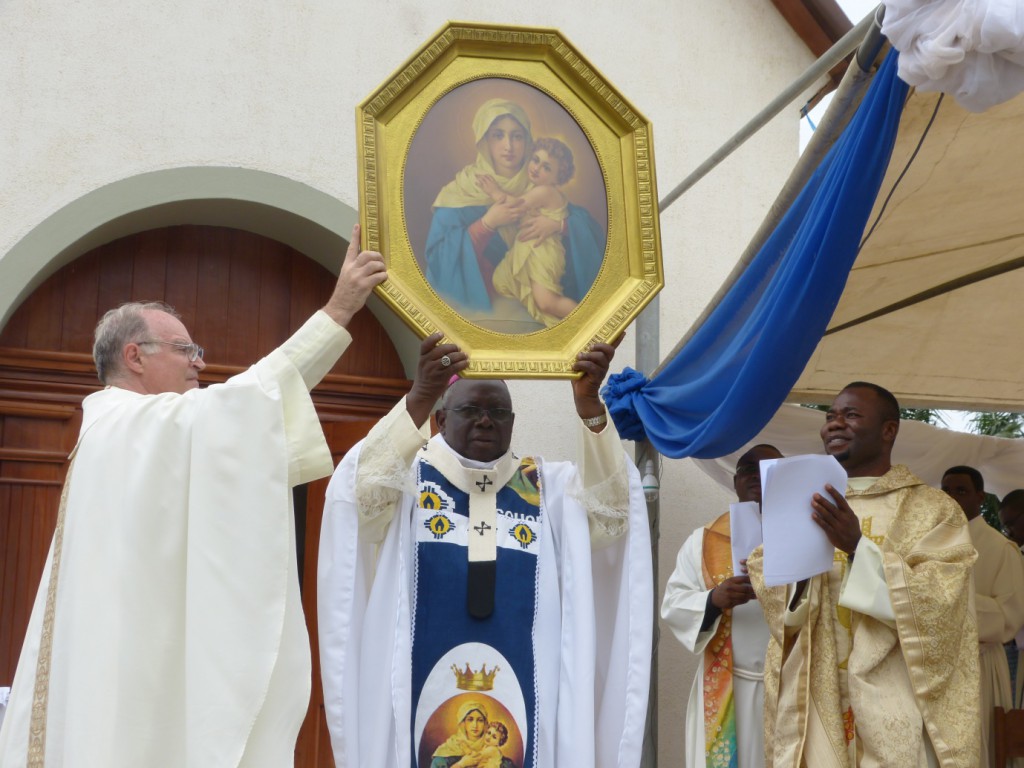 If ou want to contact the Schoenstatt Fathers in Nigeria or want information of how to join, please check their website: