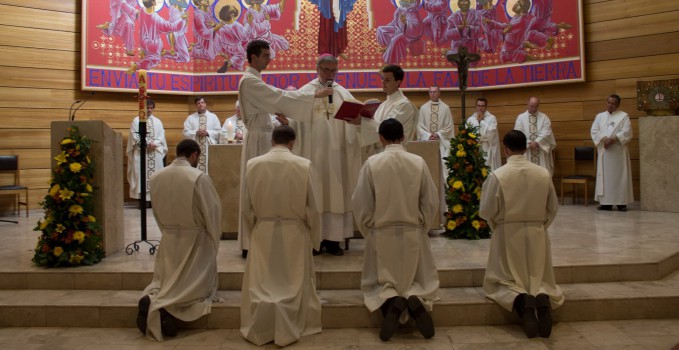 On the morning of Saturday, April 25th, in Holy Spirit church of the Bellavista Shrine, deacons were ordained for the Institute of the Schoenstatt Fathers; they are: Felipe Antonio Pérez and Gonzalo Illianes Fuertes from Chile, Juan Andrés Le Vraux from Argentina, and Julio Rodrígues Afonso from Brazil. Bishop Pedro Ossandón presided at the ordination.

Years in the waiting, at half-past ten in the morning, the procession began from the Province House to the church, which was beginning to fill. Two stops to make along the way were necessary: first at the community’s cemetery and then at the Shrine where the four ordinands had a private, intimate course moment. In doing this, they expressed some of the life that has developed during these nine years– the pilgrimage to ordination was made by participating in the history of the community and supported by the Blessed Mother from the Shrine. 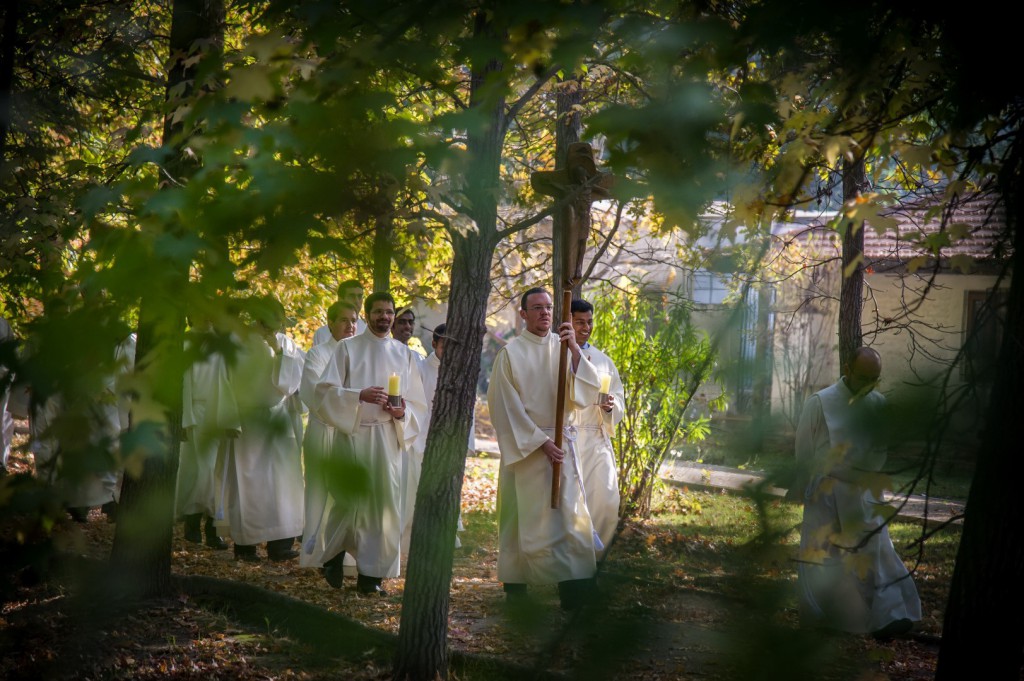 Your fidelity is a song to life, your forgiveness the melody of your love…

The clear morning, like those of Santiago (Chile), was the perfect scene for the celebration of the ordination to the diaconate, but the clarity of the day did not make you forget other skies, other afternoons, and naturally other evenings. The lukewarm temperature externalized the warmth of God’s love manifested to all those present who had arrived in great numbers from different places where the deacons-to-be had labored in their apostolates…school companions, members of the Schoenstatt Family, community brothers, families and friends from different countries and also from the different countries, where they had begun their journey of formation. Therefore in the pews, there was a mixture of the laity and consecrated people, Chileans and Paraguayans, Brazilians and Argentineans, blondes and brunettes, rich and poor…as a powerful sign of the living presence of Christ and his Kingdom in the Church.

Amid this background, the choir – composed of brother seminarians from the ordinands’ community–sang the entrance hymn extraordinarily that in the course of a few minutes summarized the days and hours in the spirit of the celebration. The verses of the hymn expressed thanksgiving; they promised and they praised God because “your fidelity is a song to life, your forgiveness is the melody of your love…your love and forgiveness are greater than heaven, your fidelity is as close as the sun…I will forever sing of your goodness, Lord…” 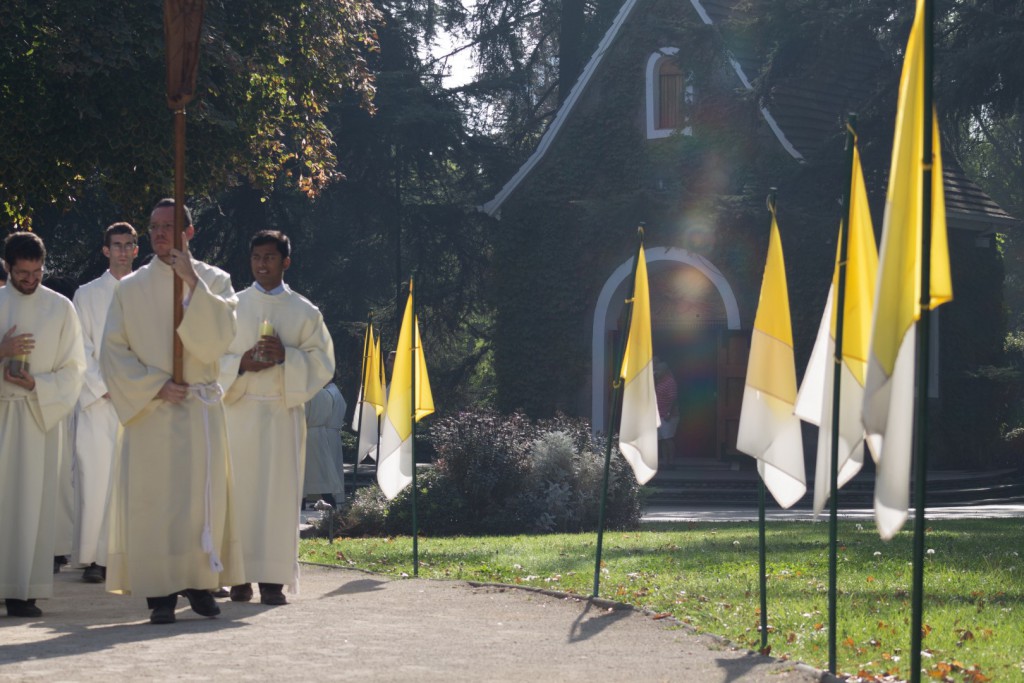 The stirring homily emphasized the meaning of the ordination: “Today they are ordained transitional deacons on the way to the priesthood…that will unite them to Christ, the servant,” he reminded them. He then presented general guidelines: “All will be fruitful if you are united to the vine and the vinedresser …do not lose the sight of Jesus.” He then made time for some very personal advice: “Do not privatize your ministry, do not take possession of what does not belong to you…never think you are doing the Church of the Lord a favor, or let alone think that nothing can be done without you…do not be unpleasant, and never, for any reason, humiliate the faithful…and never tire of giving thanks on your knees for the gift of being called.”

In all of that was the emphasis of his request – “humble and solemn”- so that “the charism of the Blessed Mother can reach the poorest of the poor in our countryside or cities (…) and may the Marian charism bring forth new shrines there.” No one present could pretend to be unnoticed before such a petition to God and especially the ordinands who during the past year engaged in pastoral activities in both Puente Alto and La Legua.

In that vein, the ordination to the diaconate was introduced. It included a variety of promises, expressions of desire, prayers, the special moment of prostration, and the final moving moment of investiture. For this part, each ordinand’s family brought forth the dalmatic vestment to the Bishop so that a previously chosen priest could attire each one in the vestment. Once having donned the vestments and now ordained, they went up to the presbytery to prepare the altar for the first time (as deacons) for continuing with the Eucharist as usual. 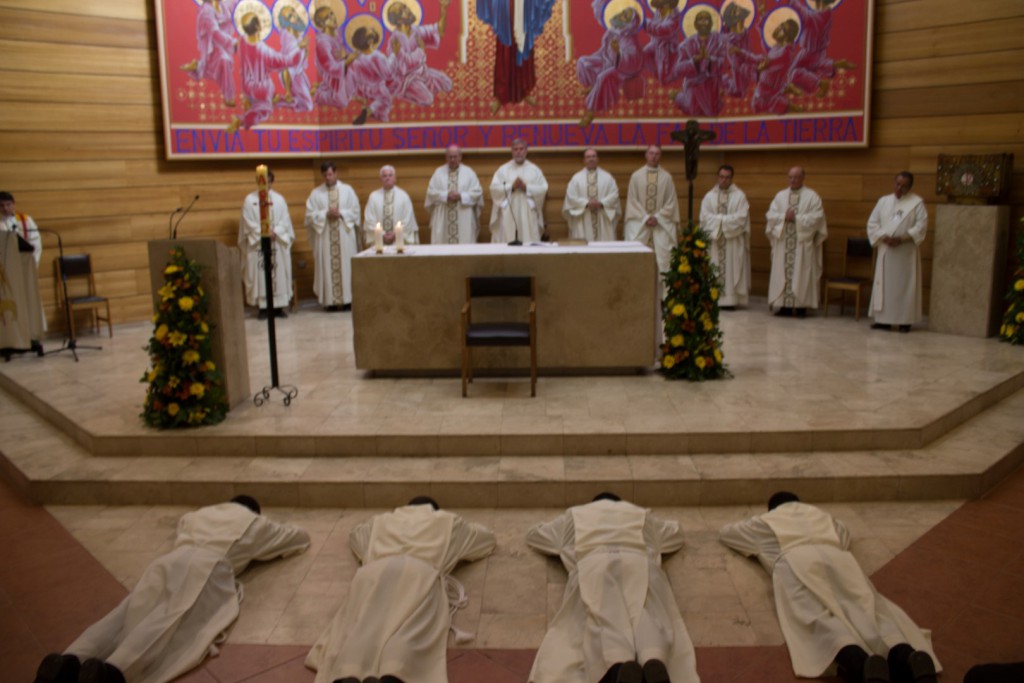 A moment of profound gratitude

After communion, Juan Le Vraux expressed gratitude to those who had accompanied them throughout the long formation period. He also mentioned the different places where they had been in the past years: the places where they had served during their novitiate – in Argentina and Uruguay – and ultimately in Santiago. When thanking their community, Juan could not hold back his emotion. The community they were attached to forever since the previous day’s experience. After a brief interruption, he was able to thank our Father and Founder, Father Joseph Kentenich who he singled out as a priestly model. Before the end of the celebration, the entire assembly went on pilgrimage to the Shrine. There the four new deacons thanked Blessed Mother for everything, and they received their first greetings. From there, there was a line several meters long where everyone stood in line to greet, congratulate and thank the new deacons. Highlighted was the meticulous presence of students in their last year from the school, where Felipe Pérez had demonstrated his intelligence during his youth and adolescence. 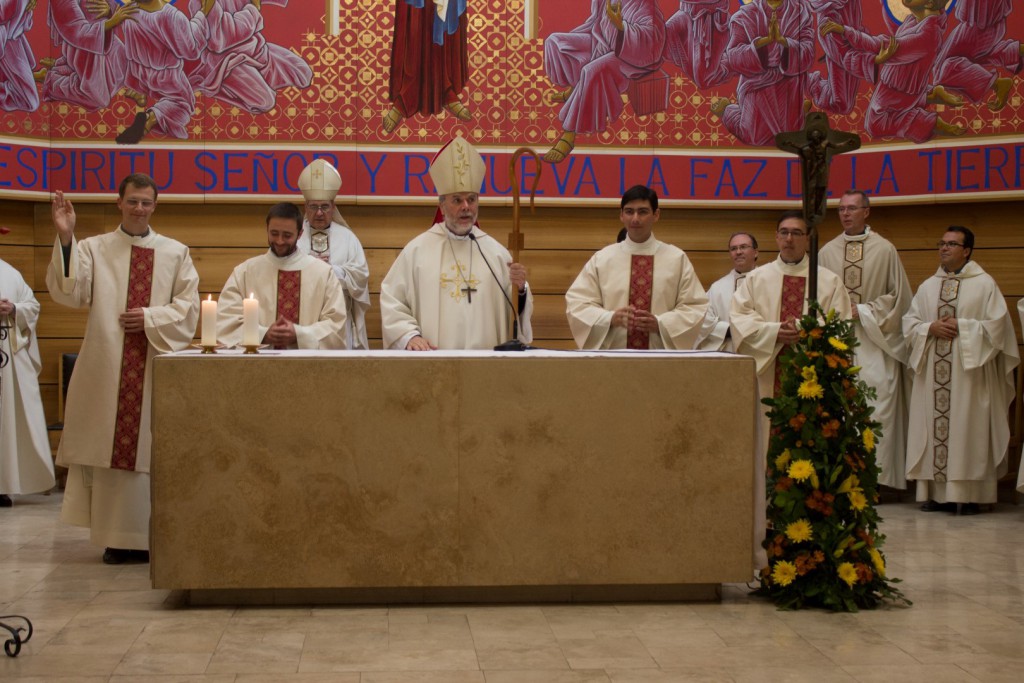 A gift for everyone

The detailed account of this narrative can cause us to fall into the trap of losing sight of the value of this celebration. The fact is that beyond the beautiful hymns, prayers, prostrations and resounding homilies, this day deserves to be remembered as the day in which the love and mercy of God were especially obvious, warmly and communally. For this same reason, the motto chosen for the ordination could perfectly be confirmed by all of us who participated in the celebration: during this ordination, we have known the love that God has for us and that we have believed in him. Therefore, the gift of the ordinations transcends the four of them, their course, the community, the Family and the Church herself, becoming transformed into a gift for everyone.

At this time, Juan will fulfill his deaconate practicum in Córdoba (Argentina), Julio in San Pablo (Brazil), and Felipe in the parish of Our Lady of Sorrows and Gonzalo in San Cayetano. Let us accompany them in their ministries, so that they, as the presiding bishop prayed, “May be saints, saints of God.” 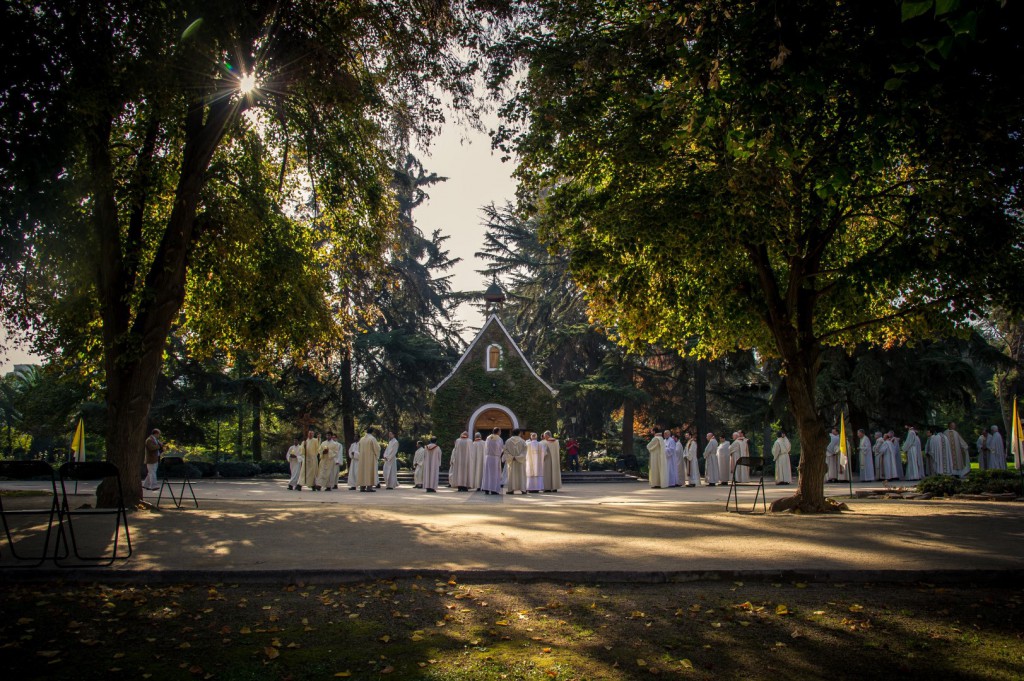