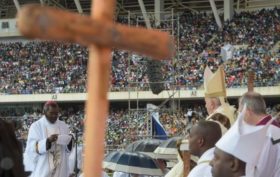 POPE FRANCIS IN SOUTHERN AFRICA, Sarah-Leah Pimentel • Pope Francis is visiting Southern Africa between 4 and 10 September. He began in Mozambique where he celebrated Mass at a packed Zimpeto Stadium in Maputo. He now travels on to Madagascar and Mauritius where he will meet with religious, civil leaders and the Christian faithful, especially the youth. — In his homily on Friday morning, 6 September at a large Mass in Maputo, Pope Francis said that love is the only way to lasting peace. He was speaking to a nationRead More 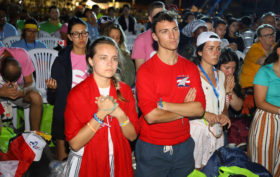 COVENANT SOLIDARITY, Sarah-Leah Pimentel • A terrible cyclone that swept through parts of Malawi, Mozambique and Zimbabwe has left a wake of destruction. The worst hit area, according to media reports, is Beira, Mozambique’s fourth largest city with a population of over 500,000 people.— The authorities fear that over 1,000 people were killed and that initial footage suggests that 90% of the city has been destroyed. Roads and bridges have been swept away. Buildings were destroyed, and a dam burst, further inundating the town. They have been without electricity forRead More