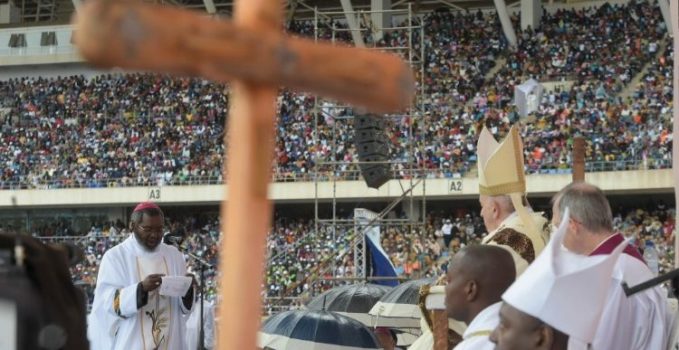 Pope Francis is visiting Southern Africa between 4 and 10 September. He began in Mozambique where he celebrated Mass at a packed Zimpeto Stadium in Maputo. He now travels on to Madagascar and Mauritius where he will meet with religious, civil leaders and the Christian faithful, especially the youth. —

In his homily on Friday morning, 6 September at a large Mass in Maputo, Pope Francis said that love is the only way to lasting peace. He was speaking to a nation that still bears the scars of a civil war that raged between 1974 and 1992, and where peace often feels more like “the absence of war.”

Pope Francis began the homily by calling on the faithful to “love your enemies.” He said that this is not an abstract theory, but is the personal lived experience of Jesus. Jesus chose his disciples at the start of his ministry. Some of these disciples later betrayed him and even delivered him into the hands of killers.

He spoke about the civil war saying that “many of you can still give first-hand accounts of stories of violence, hatred and discord.” The Pontiff noted that in light of the spate of armed attacks in Cabo Delgado Province, many people fear that “the wounds of the past will reopen” and that these “will erase the ways of peace already travelled.”

He admitted that “it’s difficult to talk about reconciliation when the wounds caused over so many years are still open.” He also said that forgiveness and reconciliation does “not imply ignoring the suffering.” But he also pointed out that an “eye for an eye” attitude will never bring lasting peace. Instead, the Holy Father noted that “overcoming violence and war is more than an act of reconciliation or the absence of conflict.”

Love to do good

The Pope urged the people of Mozambique to follow the way of Jesus: “Love to do good.”

This is much more than “forgiving the person who has hurt us.” It requires us to be active. We must “pray for those who have hurt us.” This attitude rejects revenge and instead strives to “create new bonds that lead to peace.” The Pope added that this decision to choose love and goodness is a “daily commitment” where each person treats others “with the mercy and goodness with which we want to be treated.”

Pope Francis noted that there are those who claim to help the poor, but “have other interests.” This was an indirect reference to high-level corruption, particularly the findings of the recent Kroll report that showed that government ministers and international financial institutions used public money to fund an elaborate global scam. He warned that it should not be that “corruption is the price that we have to pay to receive foreign aid.”

Let peace reign in your hearts

The Holy Father concluded his homily by referring to Colossians 3:15: “let peace reign in your hearts.” He advised that in moments of indecision and when faced with two conflicting choices, we should let Christ be the “umpire” of our hearts and enter into “the game of Christ” so that we can choose the path of mercy.

“If Jesus is the umpire between the conflicting emotions of our hearts and the complex situation of the country, then Mozambique is guaranteed a future of hope” and the “country will sing to God with gratitude.”

This is a beautiful message of hope, as Mozambique prepares for elections in October.

The programme for the Pope’s visit to Mozambique, Madagascar, and Mauritius can be found here.