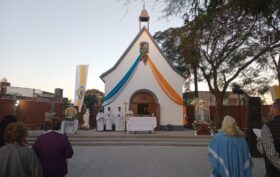 ARGENTINA, Inés Petiti / Maria Fischer • With the presence of thousands of pilgrims from the city and province of Corrientes, from several provinces of Argentina, from Paraguay, Brazil, and Chile, and with many others who were present via live transmission, the long-awaited Schoenstatt Shrine “Tierra de Maria” (Mary’s Land) in Corrientes was blessed on September 11th. — To kick off the blessing of the Shrine in Güemes 1411, where there has been a wayside shrine for many years, several activities took place on Saturday, October 10th. At 2:00 p.m.,Read More 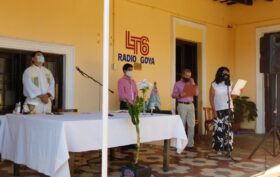 ARGENTINA, Inés Petiti • On January 31st, a Holy Mass was celebrated for the 69th anniversary of the FM radio station of Goya, the beloved L.T.6, where the Schoenstatt Rosary Campaign has its space every Sunday from 12:30 to 13:30. — As every January 31st, the great radio family of LT6 AM 1200, celebrated the Mass in thanksgiving for the anniversary of the radio, founded 69 years ago. The Eucharistic celebration was presided by the presbyter Boris Javier Escobar Sejas, Redemptorist missionary, and was attended by the municipal mayor MarianoRead More