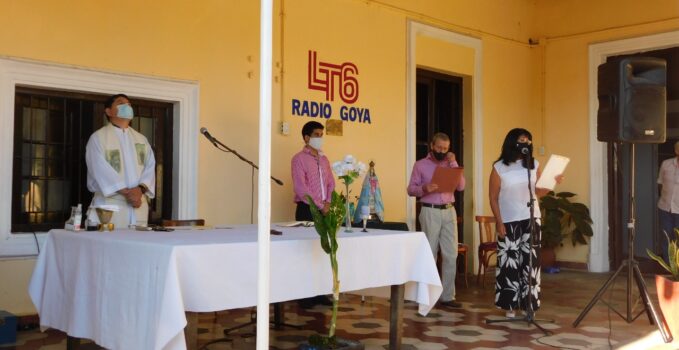 On January 31st, a Holy Mass was celebrated for the 69th anniversary of the FM radio station of Goya, the beloved L.T.6, where the Schoenstatt Rosary Campaign has its space every Sunday from 12:30 to 13:30. —

As every January 31st, the great radio family of LT6 AM 1200, celebrated the Mass in thanksgiving for the anniversary of the radio, founded 69 years ago. The Eucharistic celebration was presided by the presbyter Boris Javier Escobar Sejas, Redemptorist missionary, and was attended by the municipal mayor Mariano Hormaechea, officials, staff of the radio station, program hosts, journalists, operators, and listeners of this prestigious radio declared historical, cultural, and communicational heritage of the city of Goya, Province of Corrientes.

The liturgical celebration took place from 8 o’clock in the same facilities of the radio station, in the historical mansion at the Mariano I street (Loza, 231). It was excellently animated by the Youth Choir of the La Medalla Milagrosa parish and was transmitted live by LT6 and Splendida FM6. Leandro Romero, host of a sports program, was in charge of the reading of the Liturgy of the Word. 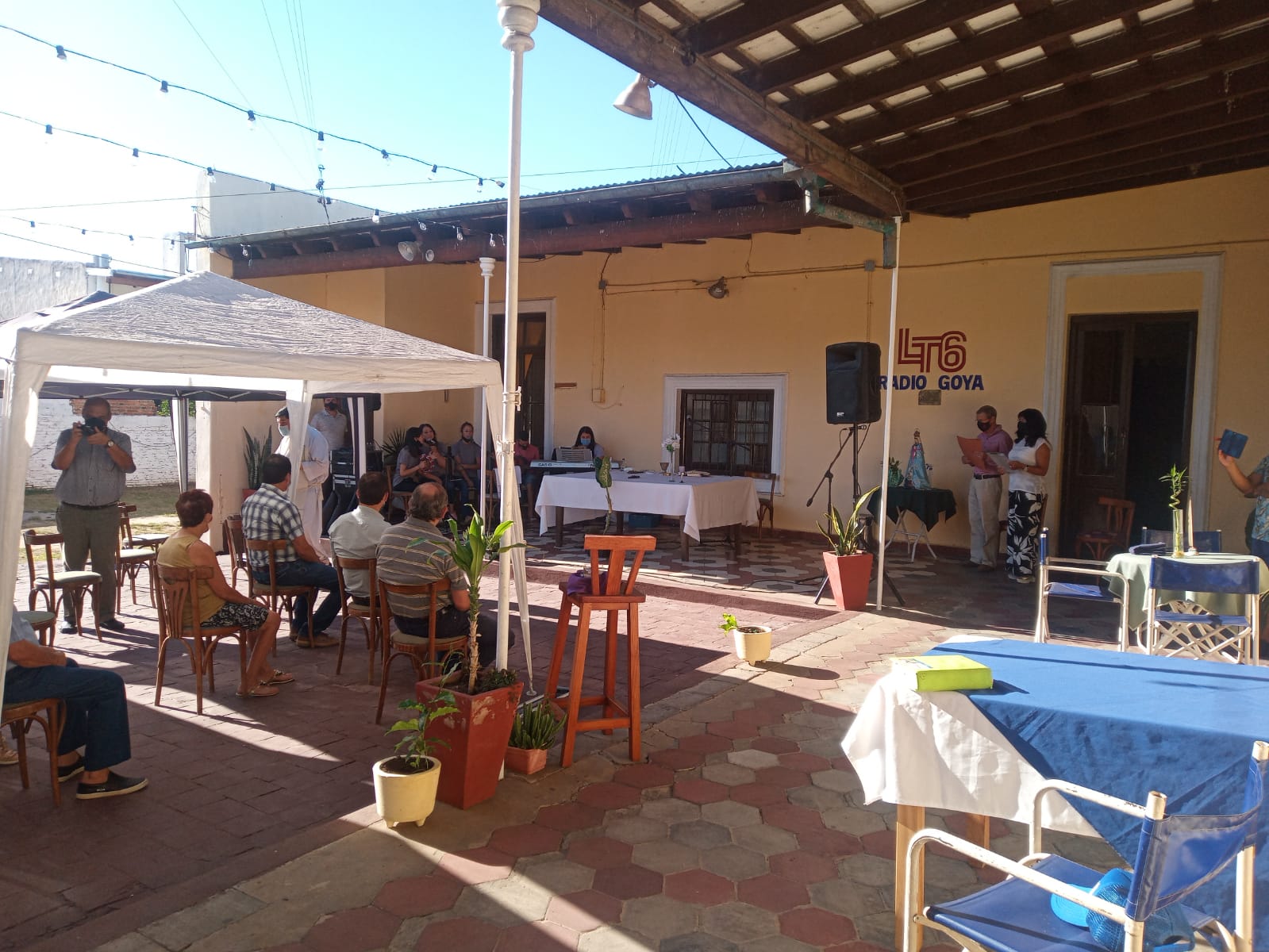 “Jesus is communication” was the initial concept of the homily of Father Boris Escobar Sejas, while he highlighted the service in communication of the AM radio of Goya, “it is a fundamental service to enrich, to clarify, to help discern the life of society in our community, in the face of fundamentally good facts”.

He went on to say that just as communication can be “a great instrument, it can also sometimes generate and add to the general confusion” and that is “obviously what we do not want to experience”.

He encouraged to have as a slogan of life “to always communicate all that Jesus does for us” and asked for each one of those present “to draw from the heart good news -not to invent- but to draw discernment and recognition of the things that are among us. Communicate what adds, encourages, enlightens, what allows us to make good decisions and avoid greater evils. May we be able to communicate what the Lord does good for us, which for Christians means to act, trusting in the grace of God”.

He urged to “communicate with truth, without adding to the confusion, building a well-informed society”. 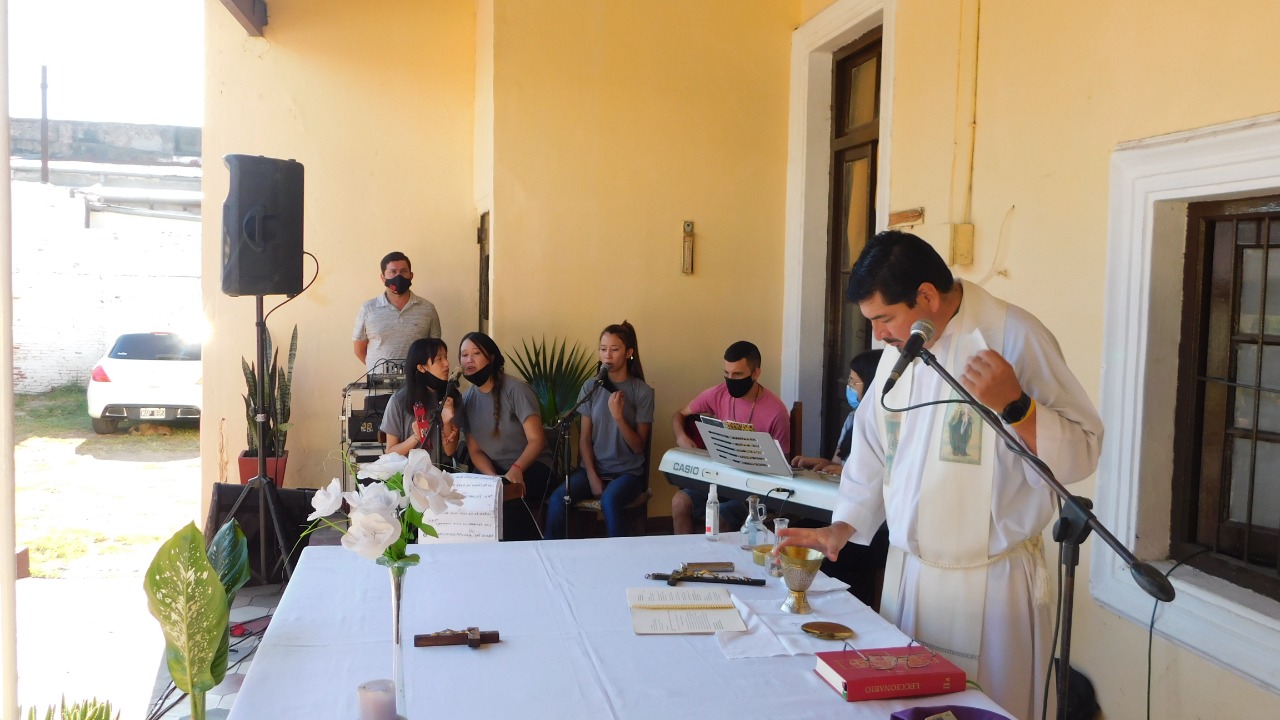 A radio saved by its own personnel

At the end of the celebration, the announcer Alejandro Medina, expressed his gratitude to “all those who shared this thanksgiving” and his recognition to all the staff of this historic Goyan radio station.

LT6 was the first AM radio station in Corrientes and the region. From the moment it began operating, it belonged to the Splendid network of radio stations, later becoming part of other chains and then to the national government. In the 1990s it was privatized and then emptied when it was managed by Difusora Correntina.

Since the disappearance of the concessionaires after an awfully bad administration following privatization in 1993, the staff took charge of the media to preserve the sources of work and formed the work cooperative Medios de Comunicación Social Seis, with the participation of broadcasters, journalists, operators and administrative staff who work at the station.

Through its microphones passed voices that later made a career at national level in the main radio stations of Argentina.

Throughout its 69 years, the radio station changed its name several times: “LT6 Radio Goya”, “Sargento Cabral”, “Genaro Berón de Astrada”, are some of the examples with which the listener became familiar throughout this time.

At present, the radio station works thanks to the effort of the employees, who had to take over the management after the frustrated privatization that left it on the verge of disappearance.

The Municipal Press Director, Alejandro Medina, said: “Father Boris spoke of what the radio station means to the families that are farthest away. LT6 is the only FM radio station, not only in Goya, but in the region. It has a radius of coverage not only for the families in the Department of Goya, but for other areas throughout the region. And I was thinking about all the changes in communications and technologies that were taking place at a faster and faster pace. And yet, radio is still alive, it can be everywhere, it can be in your house when you are resting, it can be in your workplace, in your car when you are driving. That is what radio is: permanence and validity beyond the technological changes and the new elements that exist to communicate”. 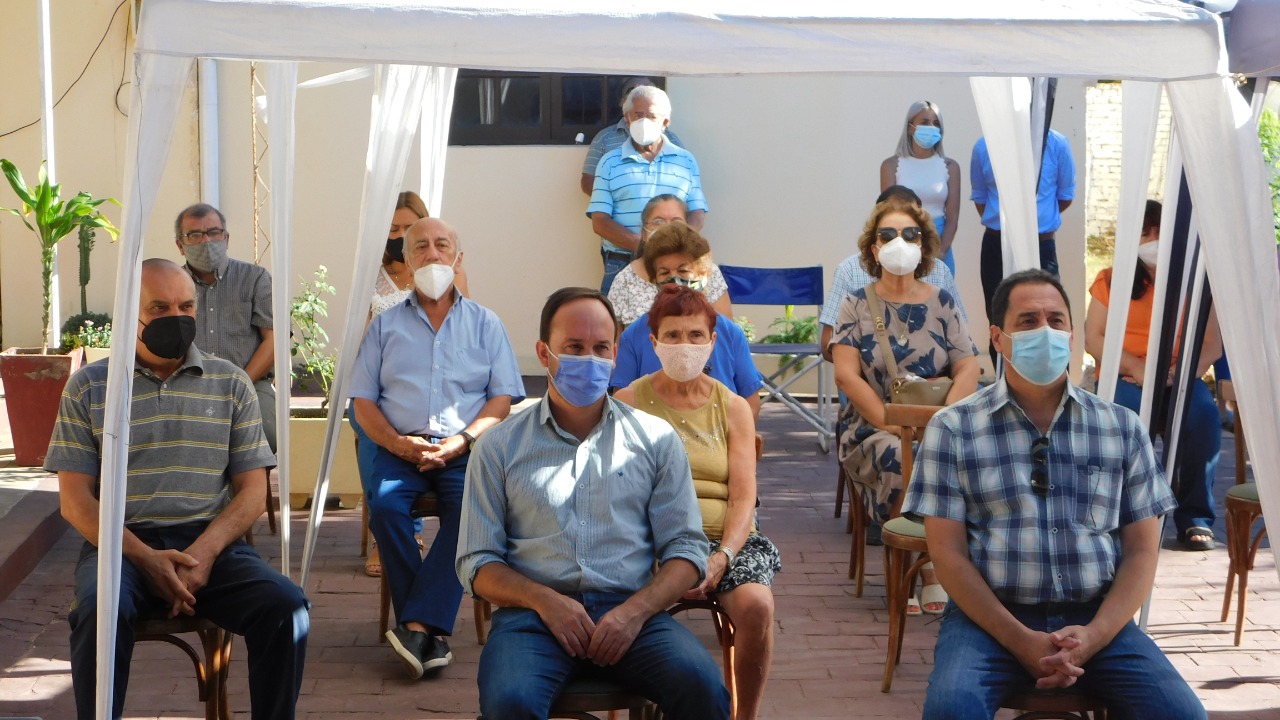 A Schoenstatt message every week

The Schoenstatt Rosary Campaign of the Pilgrim Mother of Schoenstatt has a weekly one-hour program. It began about 20 years ago, transmitting on Saturdays at noon. And for quite some time, now on Sundays from 12:30 to 13:30.

I was accompanied by other people in the reading. But I have been reading alone for a long time now. We used to do it on the same radio. But in times of pandemic, I do it from my home and Gustavo, a young collaborator of the radio station, oversees the program. 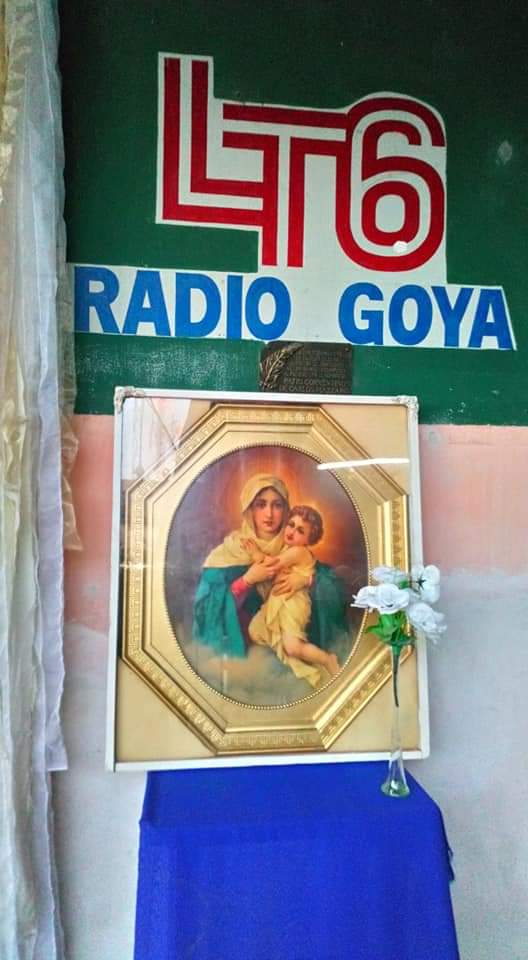 Allow them, Lord, that they may see and enjoy a new dawn in this beloved A.M. radio.

I want to ask you, Lord, to watch over and protect the people who shelter it and keep its voice.

Guide them so that they may find the path that You have prepared for them along with the first ones.

May they continue to be the voice of the voiceless.

Lord, enlighten the minds of those who can take her forward so that they may make wise decisions for her people.

Lord, let this its birthday be nourished by your love and may its people achieve that the beloved L.T.6 may have the light of your mercy and live a happy journey!

For all those who made and make the voice of the only FM radio in the region have the tranquility and harmony of a radio family, I entrust in your hands and the gaze of your mother, these 69 years and all those to come.

Thank you, dear radio, for allowing us to share the love for Mary of Schoenstatt on Sundays. 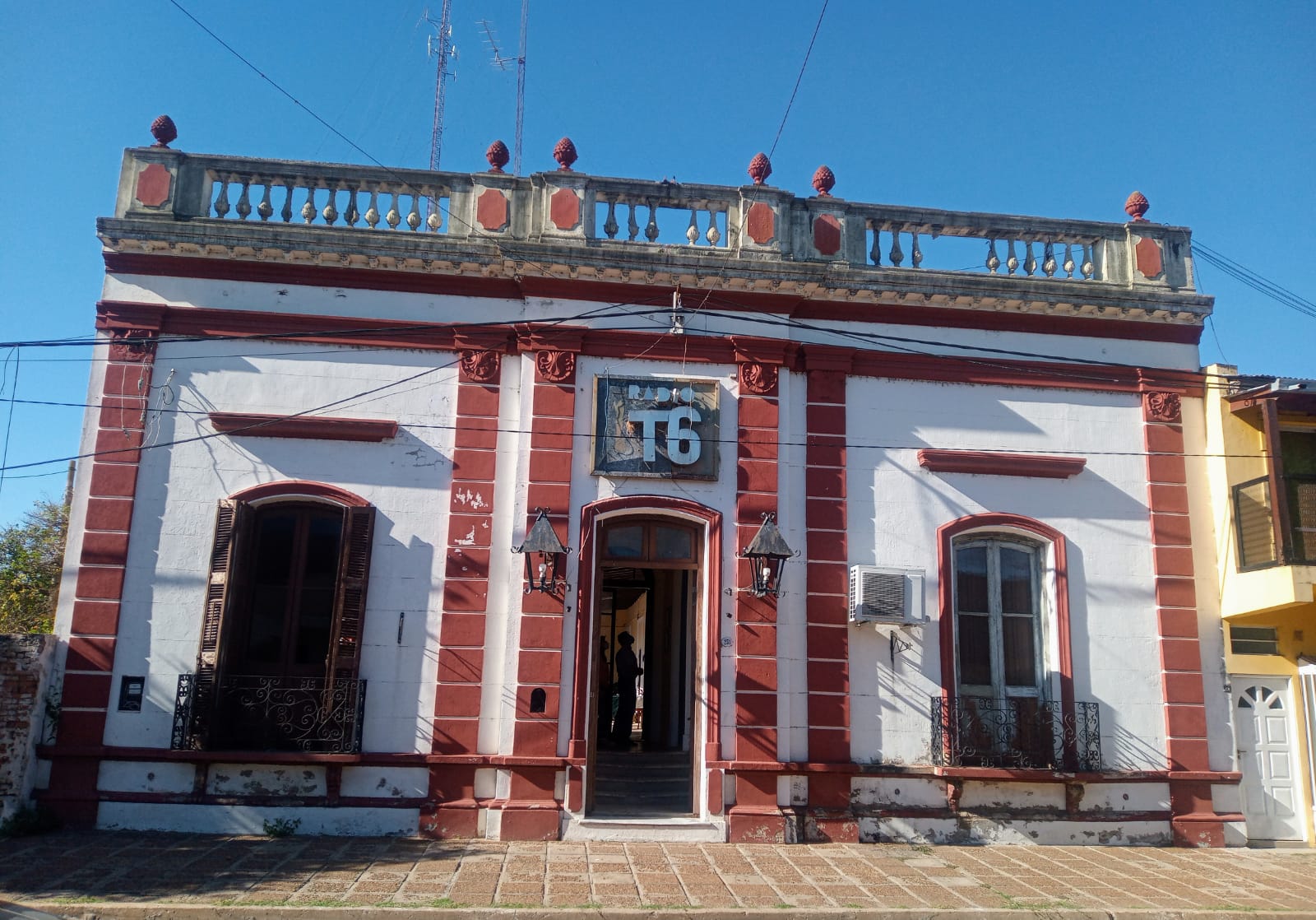 With material from www.powernoticias.com and Radio Goya