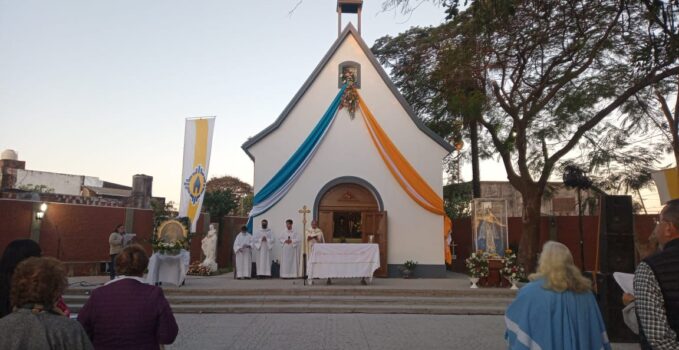 With the presence of thousands of pilgrims from the city and province of Corrientes, from several provinces of Argentina, from Paraguay, Brazil, and Chile, and with many others who were present via live transmission, the long-awaited Schoenstatt Shrine “Tierra de Maria” (Mary’s Land) in Corrientes was blessed on September 11th. — 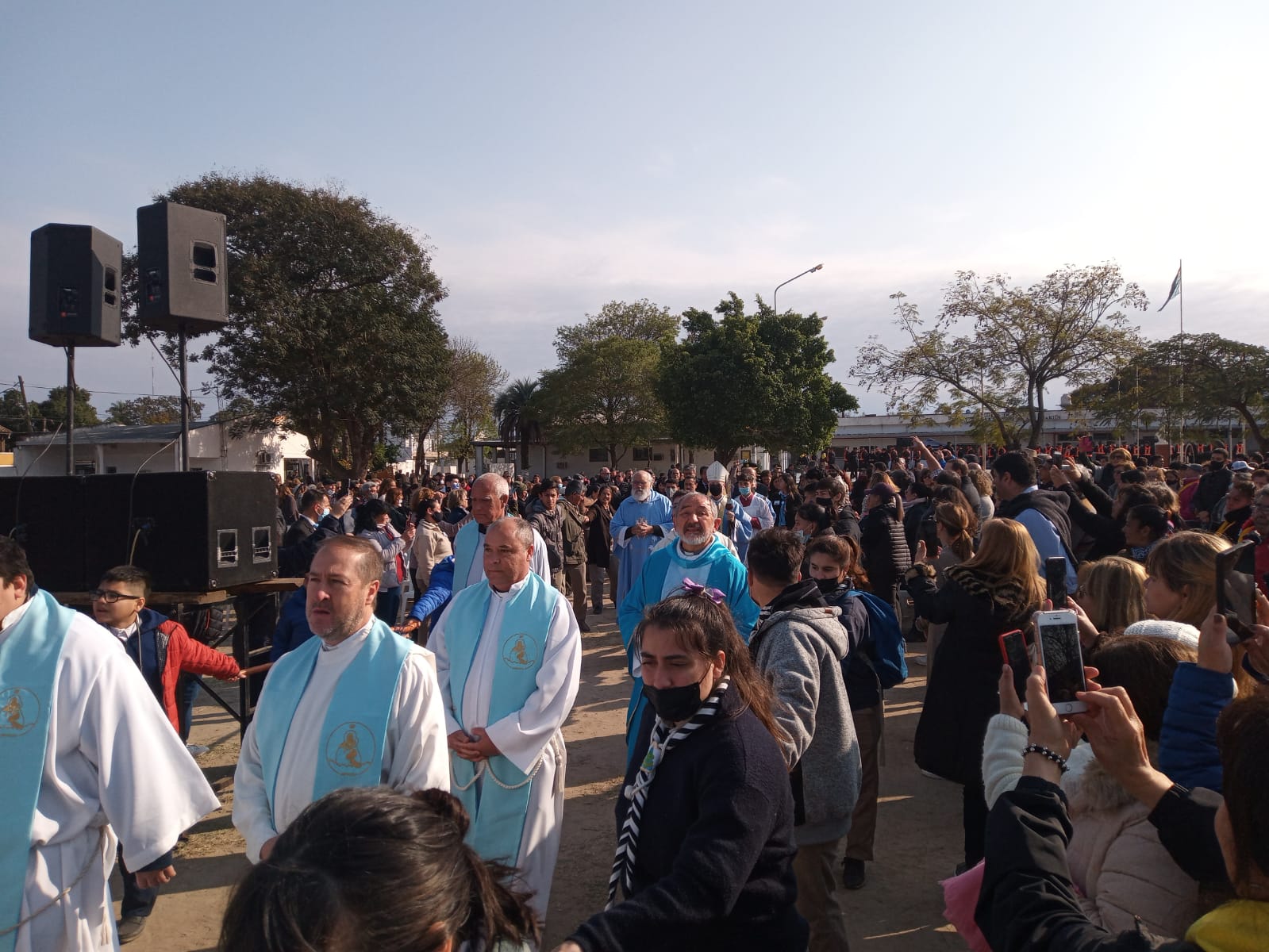 To kick off the blessing of the Shrine in Güemes 1411, where there has been a wayside shrine for many years, several activities took place on Saturday, October 10th. At 2:00 p.m., a parade with the picture of the Blessed Mother passed through several wayside shrines in the city, accompanied by the Pilgrim MTA from Itatí (the traditional Marian devotion in the province of Corrientes) and a replica of the Miraculous Cross.

In the evening, there were moments of prayer, a cantata, and a Mass with the blessing of the tabernacle of the Shrine.

The moment when all dreams were fulfilled 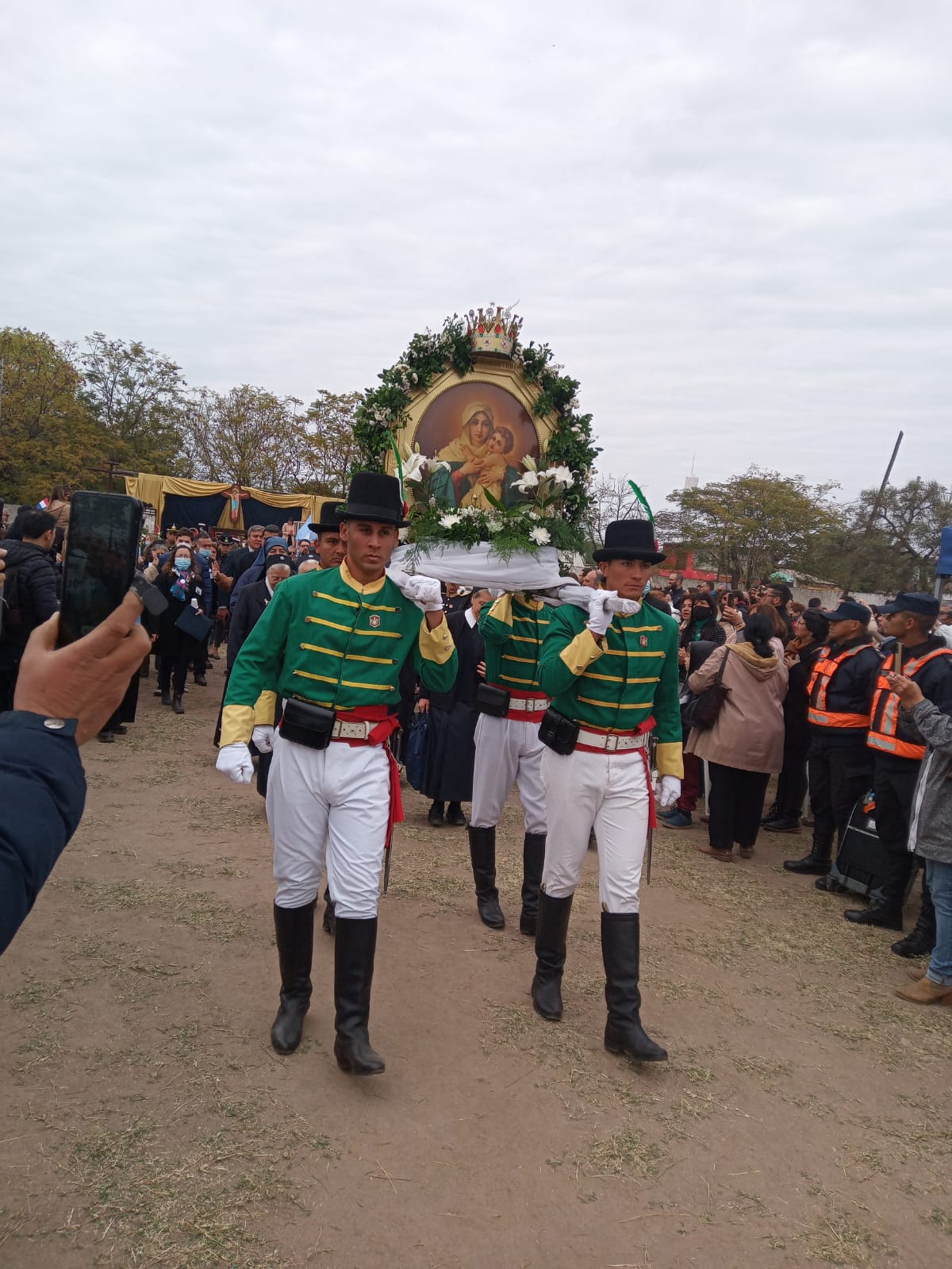 On Sunday, the pilgrims arrived very early in the morning and were warmly welcomed. The Mass, celebrated by Archbishop Andrés Stanovnik, took place in the Police School, located only two blocks from the Shrine, with the participation of many representatives from politics and society. Then there was a pilgrimage to the Shrine, where the image of Our Lady was placed. More than 3,000 people from all over Argentina were present, as well as groups of faithful from Paraguay, Brazil, and Chile. Some came in buses, others in cars and even in caravans and on motorcycles.

The Mass was a very special moment for everyone present, but the most emotional moment was undoubtedly when the picture of the Mother Thrice Admirable was placed in her shrine.

After Archbishop Stanovnik blessed the exterior and interior walls of the Shrine with holy water, and before blessing the image of Our Lady, he said off the record to those around him, “Go prepare the sapucais…” (long and pointed cry used as a shout or sign of jubilation, typical of Guaraní culture).

Then, as the image was carried into the shrine, several “sapucais” rang out while a chamamé was played and many white handkerchiefs were waved in salute to the Virgin. Then the Argentinean national anthem was sung and the great movement toward the Shrine began, because each one of the pilgrims wanted to enter the Shrine and greet the Blessed Mother there.

“Yes, I am here. I cry with happiness all the time,” commented Inés Petiti, from the city of Goya. She has told so many times on schoenstatt.org about her longing for the Shrine, about her trips to Córdoba or Buenos Aires to present the slips of paper with the contributions to the capital of grace for the wayside shrine of Goya. The happiness of finally having a shrine nearby is immense. How could one not think at this moment of the first ones who took the Pilgrim MTA to Corrientes, of Martha Liotti, the founder of the Campaign for Babies in Danger of Life, of the first couples, of those who guarded the city’s wayside shrines for years…On this day, all their dreams were fulfilled. 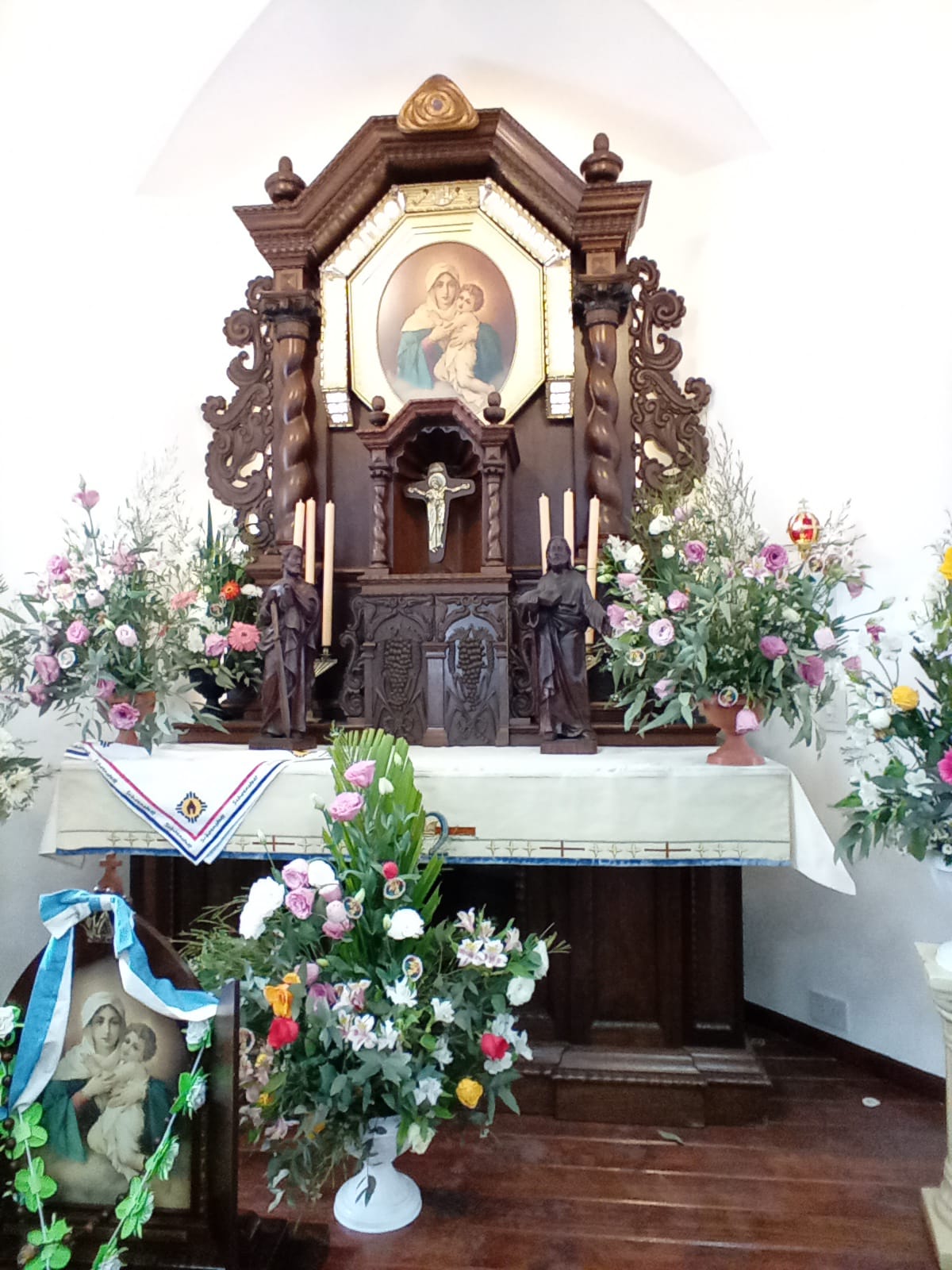 For many years I accompanied the longing for the Shrine and the steps towards its construction, but I only experienced its inauguration on the small screen of my cell phone. And that was in the room of the nursing home where my sister lives, a Schoenstatter since actually always, to whom a severe cerebral hemorrhage has wiped out much of her memory and intellectual capacity, making it difficult for her to find the right words. She did not understand what was being said, but she enjoyed the music and the singing, had fun with the military band… Until the moment came when the MTA image was carried to the Shrine. After a long silence, she said very clearly: “I still believe in it, really, I still believe in it”.

The service of the Schoenstatt members

Because of the large number of people, there was a special organization led by the members of the Schoenstatt Movement from Corrientes. They accompanied people from other provinces or countries to the lodgings, they offered breakfast, some formed barriers for the entrance and exit to the Shrine, others accompanied the priests during the celebration of the Eucharist, and some stayed to guard the Shrine and to attend to the canteen, just two blocks from the Police School where Mass was celebrated.

The motorcyclists of Paraguay

Arturo Aguilar is one of the motorcyclists who arrived Friday from Paraguay. They attracted the most attention with their black leather jackets on which a picture of the Blessed Mother was printed. When the picture was carried into the Shrine, they honked deafeningly loud, and many of them were moved to tears.

“We have prepared ourselves spiritually and economically. It is a blessing to experience this historic moment when the Blessed Mother descends to a place and distributes her grace. It is the most wonderful thing there can be. As spoiled children of Mary, we feel very happy to be with the people of Corrientes,” Arturo explained.

At the same time, he related that “we always go on pilgrimage to the Shrines and also to the churches. There are 18 of us and we came on nine motorcycles.”

“The Paraguayan motorcyclists are missionary couples of the Blessed Mother,” commented Inés. “You can’t imagine how much noise they made with their motorcycles!” 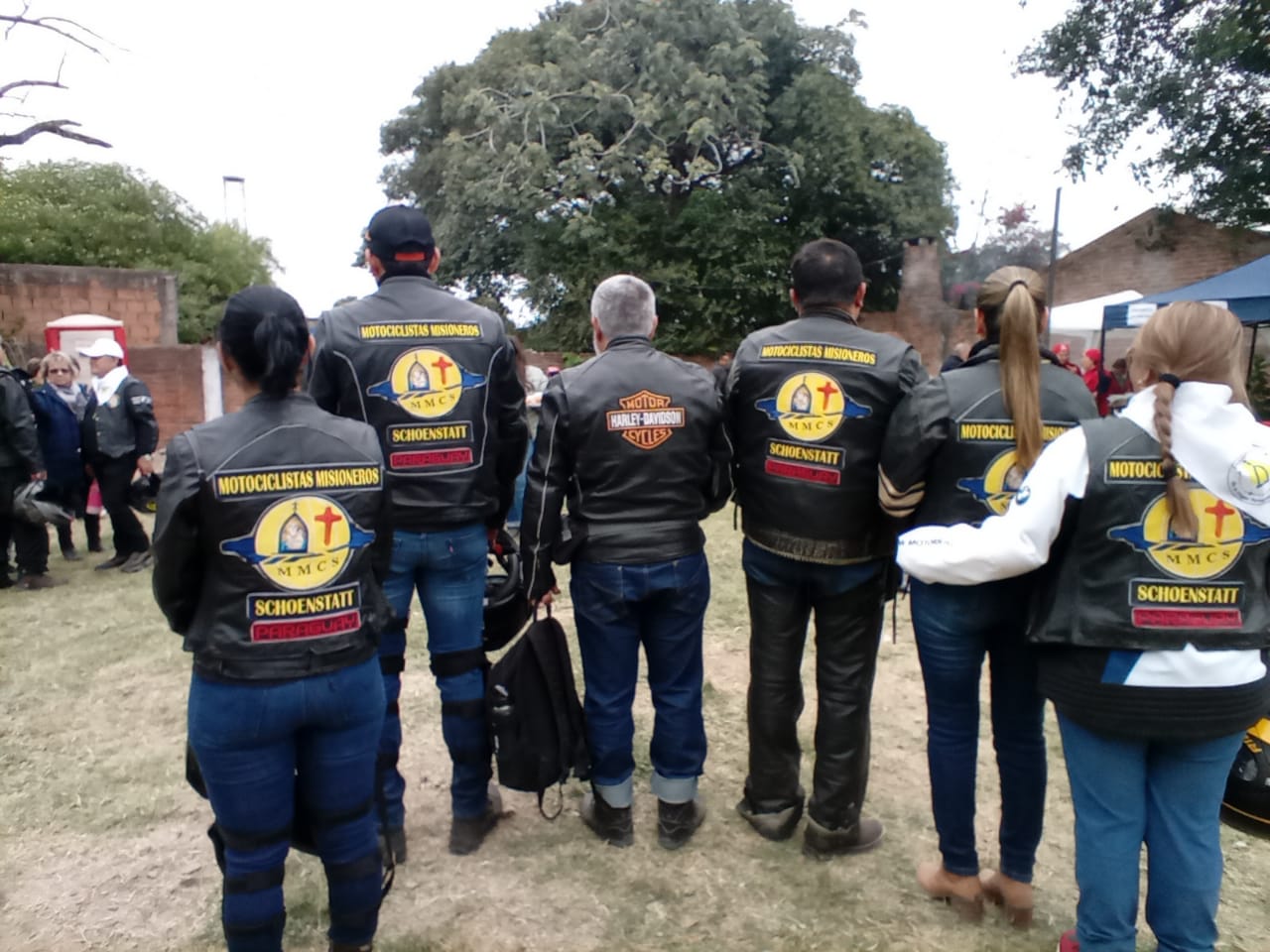 The “Madrugadores” in this city have been meeting every other Sunday from 8:00 am for the past five years to pray the Rosary. It is a community of about 50 men, of whom between 15 and 20 meet regularly to pray, the rest are “swallows.” “For many men, it is the gateway to the Schoenstatt men’s communities,” explains Ramón Sandoval, one of the members. “The Madrugadores are like a kindergarten for entering the Schoenstatt world. Then, when they discover a new way of living the faith, each one of them decides if they want to join the Men’s League or the Men’s Federation, or if they simply want to remain in the popular and pilgrimage movement as madrugadores,” Sandoval added.

They are part of the Schoenstatt Men’s Column, which is also formed in Corrientes by the Boys’ Youth, the Men’s League, and the Men’s Federation. One of the Madrugdores from the neighboring province of Chaco will share his experience of the blessing of the Shrine in an article that we are still waiting for. 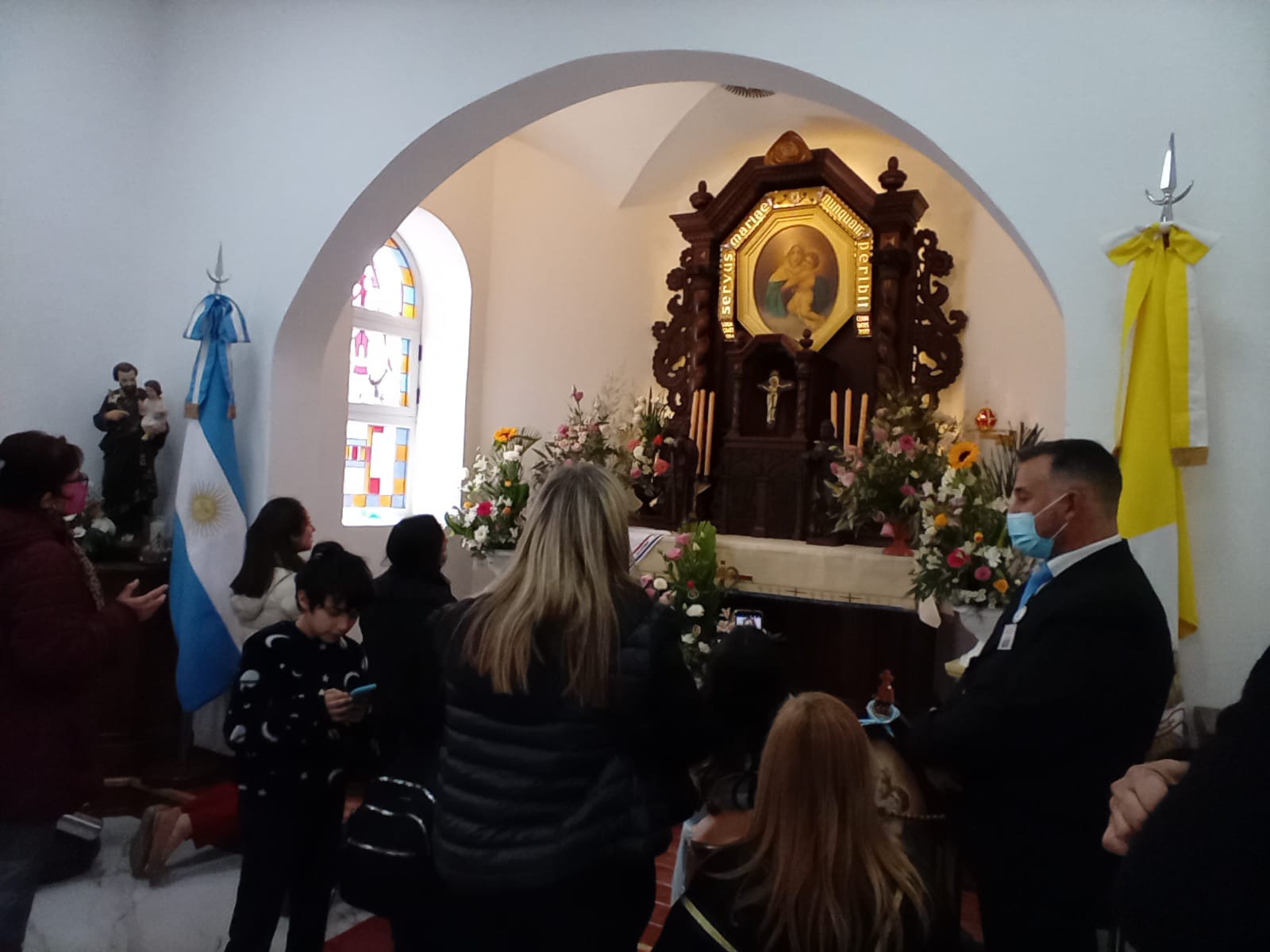