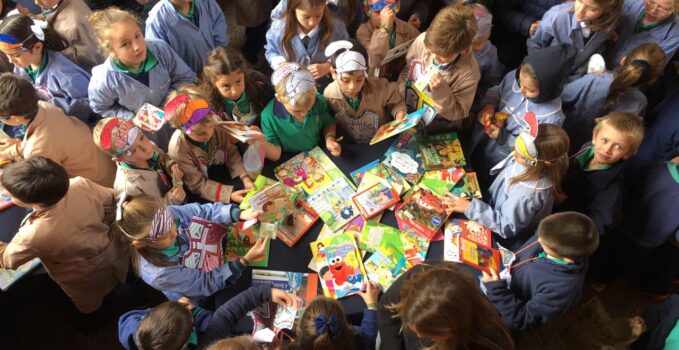 The educational issue is very important in our Schoenstatt family for the mission. That is why it deserves permanent reflection from different points of view. —

From education is where significant signs should be marked, such signs should generate paths of inclusion, that seek to overcome the discrimination and social gap that we have within us and that conforms us as a caste, exactly what Fr. Kentenich never wanted.

“We have to begin by overcoming this caste pride or caste treatment in our midst; I intentionally say “caste”, you understand what I mean (…) Solidarity among the various branches, among the Institutes, the Federations and the League (…) This means that we want to anticipate the ideal society. Not only spiritually, but also vitally, in a certain sense, even economically” (Quotation from the book of Father Rafael Fernandez:  20 de enero, 31 de mayo y la Redención).

Father Joaquin Alliende, in Horizonte a la vista, Schoenstatt Vivo, 4/12/2014, pointed out: “There is a danger that will always threaten Schoenstatt: an elitist posture, which transforms our communities of leaders (NR: Institutes and Federations) and League members into selective and self-referential nucleuses. In practice, this means making the Popular Movement of Pilgrims an anemic and unimportant body”. The role of the Schoenstatt schools

In the world we have about 30 schools (Chile, Argentina, Uruguay, Mexico, Germany, Spain, Portugal, Brazil, India, Peru, USA) that follow Fr. Kentenich’s pedagogy, they are mostly private schools.  In Chile there are nine in the network of Kentenich schools of the Pentecost Foundation and only one of them is a school in a low-income neighborhood and free of charges, in Puente Alto, of which an interesting article has just been published in this same medium, the others are in high-income sectors.

If we want to stop being a socially elitist or caste movement, we must take significant steps in the area of education. This means defining the spaces that we must conquer, which naturally must lead us to the most deprived sectors of society.

This transformation is not only to be faithful to the message of Christ and our Church today, but also to enrich our movement with other existential realities. I have already commented on this subject on other occasions.

Coherence and consistency oblige us to address this issue urgently. In no case does it mean abandoning the existing schools or the middle and upper class students, but on the contrary, achieving a real social integration, which allows the reunion of different social realities, enriching both of them with their diversity, growing in solidarity, diversity, respect and tolerance to the other, assuming together the challenge of building a real common house more fair and equitable for all.

It seems to me that the way forward is that these schools should be opened to other social sectors. However, in Chile, their location already discriminates and makes access difficult for those who live segregated in remote areas.

That is why I propose that each private school should have another one under its responsibility and management for underprivileged sectors.

Some characteristics that I suggest:

Naturally, the intention is not to mark all the aspects that should be considered, but only to give a brushstroke that marks central aspects of the idea to be followed. In short, this should be studied and worked on by a team of professionals called for this task.

Perhaps the readers can also complement and enrich this proposal.

What would Fr. Kentenich say.

I sincerely and humbly ask the institutions that manage our schools (Schoenstatt Fathers, Sisters of Mary, laity) to enter into this process as soon as possible for the good of Schoenstatt and of each country.

What would Fr. Kentenich say to us in these circumstances? “…the Council was aiming at a renewed Church which would have the characteristic of being a poor Church, in itself poor… But, in addition, a Church not only marked by poverty but also a friend of the poor, a friend of those who were not among the favorites of the people of the Church, or simply of human society” (cited from: La renovación de la Iglesia, Nueva Patris, Chile 2004, p. 100).