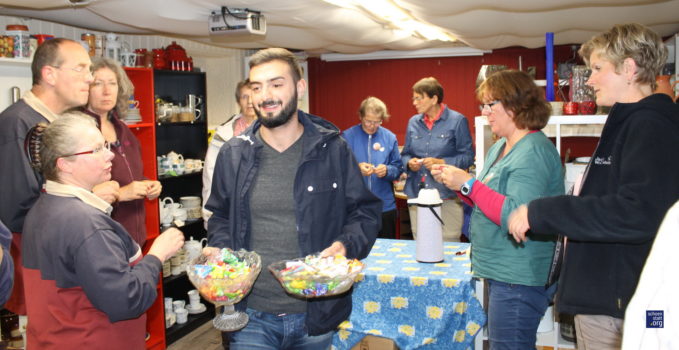 Refugees have given parishes fields of work they have not had for a long time – Schoenstatt as well?

Wonderful and profound experiences were had by the colourful group that set off from Cologne on Sunday 31 July under the banner and with the intention: Trust in God. Rain – “usually not too bad, but more at times” – tired feet, good conversations, many photos, completely new experiences, such as the open round of thanksgiving in the evening during which the participants opened their hearts and related personal experiences, small but intensive with hosts at the wayside stops. Once families, with whom the pilgrims spent the night, came to the evening gatherings, and twice people of a parish spontaneously joined the pilgrimage the following day, as Petra Rash reported. The covenant with God the Father, which Fr Kentenich had entered into fifty years before in Cologne, motivated the core of this pilgrim group to carry its message onto the streets and share it with many people in this Year of Mercy, and many joined in. 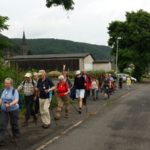 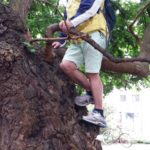 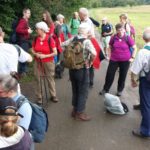 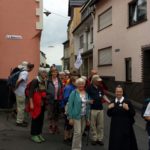 In the evening of 4 August saw a further qualitative intensification of the encounters. “This time not only we told them, but the people in the parish and Fr Stefan Dumont, the parish priest, told us about their involvement in the spirit of mercy”, Lukas Schreiber related. You could see how much he was looking forward to this meeting.

And so the pilgrims and a number of the residents of Andernach met at 6.30 p.m., to celebrate Holy Mass in the huge church of the Assumption, which people lovingly call their “Marian Cathedral”. It lies directly beside the ancient town walls. Fr Hans Schnock, a member of the Institute of Schoenstatt Diocesan Priests, and Fr Stefan Dumont concelebrated. In the congregation were some Muslim residents of Andernach who had arrived from the Lebanon and who followed what was happening attentively.

After Holy Mass everyone was invited to the parish centre where the pilgrims had prepared a tasty supper for all. Conversations quickly sprang up and this flowed seamlessly into reports on the activities of the parish. 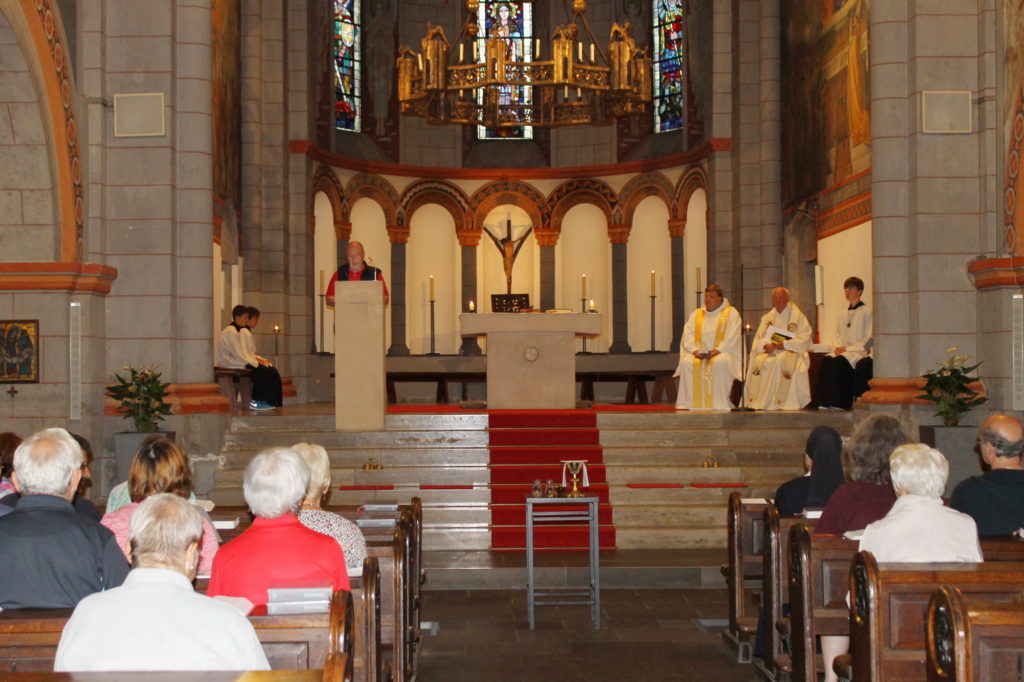 For People in Social Hot Spots

The parish of St Stefan in Andernach was founded in a social hot spot. About forty-five years before, the first parish priest, as Fr Dumnot said jokingly and yet with admiration, had built up a “social imperium” with a home for the elderly, a Kindergarten and Crèche, a place for games and study, a service for visiting the sick and families, and a whole host of parishioners who voluntarily undertook social services. At the World Youth Day Pope Francis had said that the answer to the question “Where is God in all the suffering” can be found in Mt 25, 35-36 – I was sick, I was hungry, I was a stranger … We touch Jesus Christ in the wounds of the people who are sick, hungry, homeless. And you … Some of the joy of this way of touching Jesus shone in the eyes of an Andernach resident who told us about the crèche. There was no trace of the highly polemical resistance of those who see the end of the Christian model of the family and education in such crèches, and who probably have never met a young, single mother who refuses to live from social security payments … 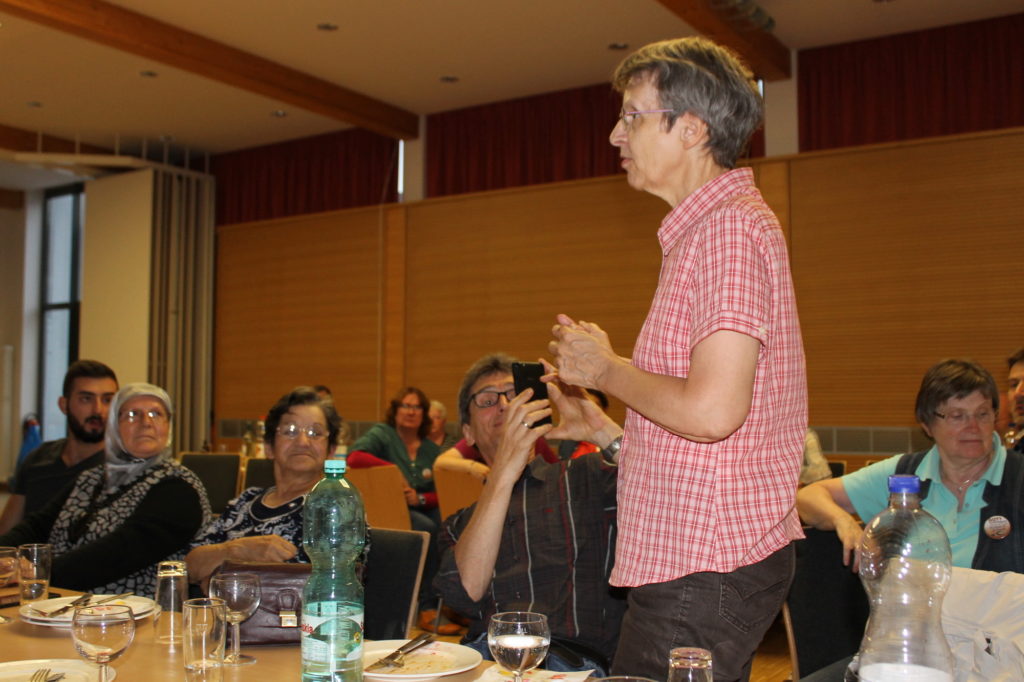 The favourite project of the Andernach residents is the bazaar – you can hear them talk about it and see it in their radiant eyes. “I am 64 and retired six months ago, and I can’t do nothing all day”, one of them said. So she helps with the bazaar. In return for a coupon made out by the deacon, depending on the size of the family and its needs, refugees can buy household good there. A Lebanese woman who has lived in Germany for many years, acts as interpreter, because most of the refugees can only speak Arabic. “But they learn quickly”, a young man from Lebanon added quickly. We laughed heartily when the lady working in the bazaar told us about a donation of crockery. It was Bavarian blue and ivory with a golden edge. “My granny had one like that as well!”

Their enthusiasm was infectious and the pilgrims, who were rather tired after their day’s march, got up and went into the parish centre where the bazaar was held. The donations were carefully sorted, examined and then displayed in the salesroom. Of course, there were black sheep on both sides – refugees who only selected the best things and then sold them again at the next flea market, and donors who gave broken cups and a frying pan with the remains of rancid fat … But these were exceptions, the helpers told us. Children were always given a sweet, and were allowed to take along a toy. The families fetched crockery, cutlery, pots and pans … During the sale conversations sprang up and people got to know one another; they met as equals and saw each other as people … 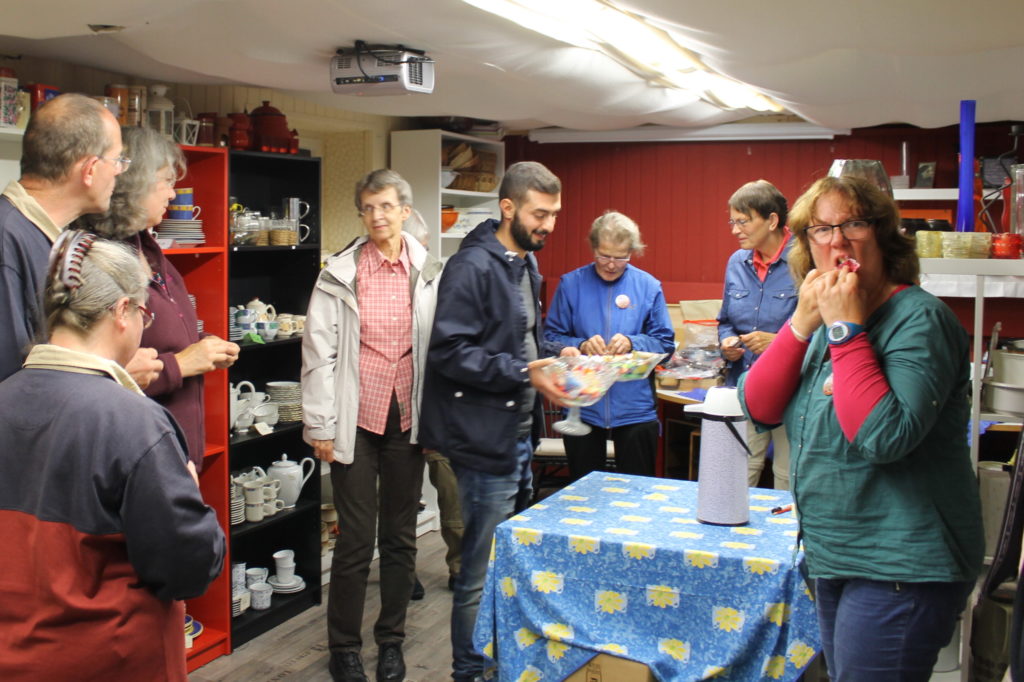 For us a blessing

“Mercy”, Fr Stefan Dumont said, “it a big word. And people perhaps think they must make it a programme”. But, he explained, mercy is not a programme, it is an attitude of seeing need and spontaneously responding to it with determination, and personal help. I was hungry … and you gave me to eat.

“Much has come into existence here from little, personal answers to personal need. This became clear to us, because the residence on the Rhine where the three hundred refugees have been accommodated is a long way from the town if you have to walk. They needed bicycles! These were donated, but some were damaged. They were repaired … and this became “the Pump”, where enthusiastic volunteers fixed up the bikes and handed them over to the refugees for a tiny payment.” Their own property. “It is important. Then they look after the bikes better.” There was so much more: Clothes room, accompanying people to officials, interpreting … “The wave of refugees was a blessing for the parish”, Fr Stefan Dumont told the surprised pilgrims. Crisis? No, a blessing. “Through them we have discovered fields of social action in the parish that did not exist before. Ant that does our parish an incredible amount of good.”

“Jesus himself chose to identify with these our brothers and sisters enduring pain and anguish by agreeing to tread the “way of sorrows” that led to Calvary. By dying on the cross, he surrendered himself into to the hands of the Father, taking upon himself and in himself, with self- sacrificing love, the physical, moral and spiritual wounds of all humanity. By embracing the wood of the cross, Jesus embraced the nakedness, the hunger and thirst, the loneliness, pain and death of men and women of all times. Tonight Jesus, and we with him, embrace with particular love our brothers and sisters from Syria who have fled from the war. We greet them and we welcome them with fraternal affection and friendship.” Those were the word of Pope Francis at the World Youth Day exactly a week before. Here in Andernach they encounter the Lord in a deeper way because they are merciful like the Father – over there in the bazaar. 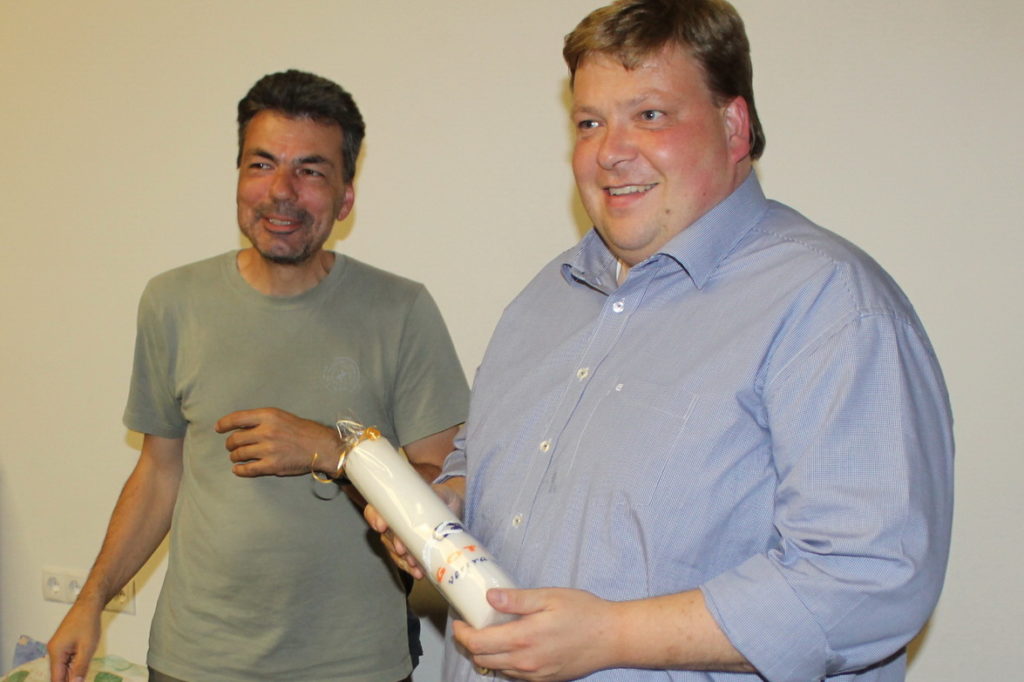 There we touch the Lord

The eyes of the people of Andernach are radiant in a way I last saw in the eyes of the collaborators in the Schoenstatt prison pastorate in Paraguay, and in those who have built houses for families living under plastic shelters. … The Schoenstatters there ask themselves where the State is when they encounter such misery, and because the State isn’t there, they are. “Here one asks where is the State not? Everything has been institutionalised, and if the State isn’t there, Caritas is …” The Schoenstatter stopped in the middle of the sentence. “And then those here tell us that they have discovered areas where they can work …”

It is impossible that Jesus will not give the people and the Schoenstatters in Germany an opportunity to touch him – in the hungry, the thirsty, the strangers, the sick …

The statement by Fr Stefan Dumont, that the refugees have been a blessing to the parish, because through them the parishioners have discovered areas where they can do social work, areas of mercy, has fallen on good ground in some souls.

It leads into the heart of the project “trust in God” – trusting that God will also give Christians in Germany, as well as Schoenstatters, areas for merciful action in the sense of Matthew 25. With the refugees. And once we have learnt to see, we won’t stop with them.

The candle with the symbol of the project “Trust in God”, which the group gave the parish as an expression of gratitude, is now in the bazaar. 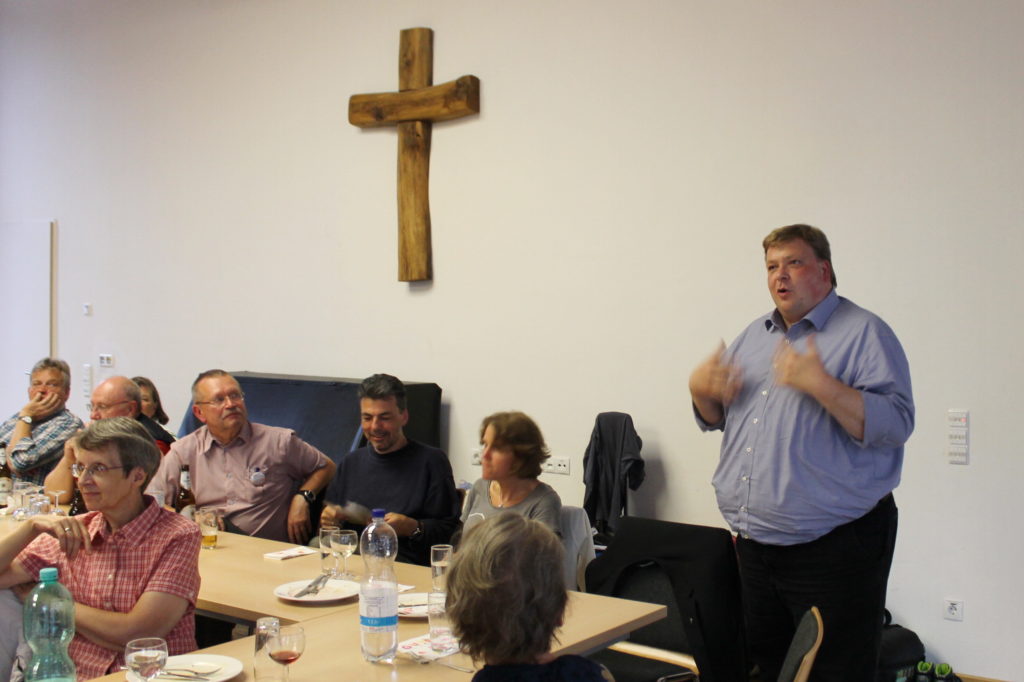