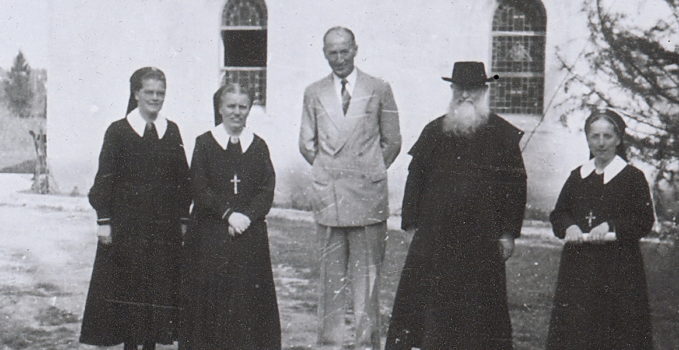 His Paternity, Creator of Hope and Life in Liberty

For our Schoenstatt Family, Father Kentenich is one of his most central truths – “a point of contact,” we say – along with the Blessed Mother and the Shrine.  He is also an example of the “Covenant that transforms.”  His life history could have transformed him into a bitter person, rancorous, and vindictive. He could have ended up depressed and tormented, like so many prisoners from the concentration camps, renouncing even the Church like those who suffer from the injustice and authoritarianism of some of its leaders…

What permitted him to make true opportunities from so many difficulties?  When he had not even reached nine years of age, he consciously experienced that Mary had taken him under her care and began educating him in a mutual Covenant of Love.  Mary made of him a fine person, of counsel, an “exemplary priest” (John Paul II), a founder to imitate (Pope Francis), father and prophet to many.

Why do I invite you today to meditate on his person?  I am motivated by the fact that on August 20th, it would have been 70 years since a group of Sisters of Mary, gathered in the Nueva Helvecia Shrine, sealed, for the first time, a “covenant” of daughters with Father, and he with them.  This covenant also made history; it transformed the heart of these Sisters and continues doing so in those Schoenstatters who give him their hearts so that he can transfer them to Mary.

Many who got to know him experienced his paternity, creator of hope, and life in liberty.  In a letter that he wrote to one of his closest collaborators, he spoke of the secret of that paternity:

“Let me tell you about the gestation of Schoenstatt.  After opening the hearts and creating a certain spiritual climate through the conferences, my main task was to be at the disposition of people day and night.  Many had to be helped with the solution to their psycho-spiritual problems, support them in their searches and overcoming their complexes.  I define this task as creative paternity and maternity, which not only cultivates a respectful distance, but also an animated closeness through love, always disposed to surrender all for those who have been entrusted; who sacrifices not only the tranquility of sleep for them, but who also consumes even the last strength in his pastoral attention.  As Jesus teaches:  ‘no one has greater love than the one who lays down his life for his friends.’ ” (A letter to Fr. Alex Menningen).

Dear brothers and sisters, on the upcoming 15th of September, we will begin the “Year of the Father.”  From 15 September 2017 to 18 September 2018, the anniversary of his death, we will be able to study in depth his person and his charism even more so.  Therefore, I invite you to gather in our Shrines and Wayside Shrines to begin a year that not only wants to be a memory, but a motivation to assume his charism and to take it to the world and Church: “Schoenstatt on the way.”

The phrase written on the carpet where he died, “Heavenwards is the way,” is the indication for this pilgrimage while we confess:  “Father, we go with you, our hearts in your heart, our thoughts in your thoughts, our hands in your hand.”

Blessed Covenant day to each of you, and may the Blessed Mother continue transforming us in love,

National Director of Schoenstatt in Argentina