USA, Sofía Benegas. The Schoenstatt representativesof the Association of Ecclesial Movements and New Communities were invited to represent the Schoenstatt Movement of Washington, DC at the celebration of the tenth anniversary of the Joint Declaration of the Holy See and the Lutheran community on the Doctrine of Justification,which was hosted by the nuncio, Archbishop Pietro Sambi and by Archbishop Donald Wuerl, at the artistic and solemn galleries of the Pope John Paul II Cultural Center in Washington DC, near the Catholic University. 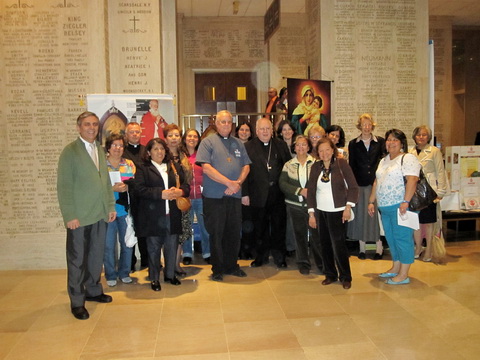 Ecumenical initiatives are finally bearing their long awaited fruit. The Vatican just announced a forthcoming Apostolic Constitution which will create a structure for traditional Anglicans to enter into full communion with the Catholic Church. There are an estimated 400,000 faithful (including 20 Anglican Bishops) who may be received into the Catholic Church through this new structure.

Ten years ago, the Holy See and the Lutheran community achieved a great milestone: the Joint Declaration on the Doctrine of Justification. The words of unity are growing and spreading!

After the celebration the representatives of the Schoenstatt Movement shared some minutes with the nuncio, who spontaneously told them about his experience with Schoenstatt in Africa and in other places.

Yearly Mass of the Movements

On October 31st there was a Mass in thanksgiving for the manifold works of the Holy Spirit through the Ecclesial Movements and New Communities in the Archdiocese of Washington, of which the Schoenstatt Movement is an active member. It was on the  Vigil of the Solemnity of All Saints. Bishop Francisco González celebrated the Mass. Fr. Michael Schapfel, member of the Institute of Schoenstatt Diocesan Priests, pastor of the German community in the Washington area, concelebrated the Mass.

After the Mass, each movement shared and exhibited their materials with their own different charismas; all of us arecommitted to expand the Good News to the world.