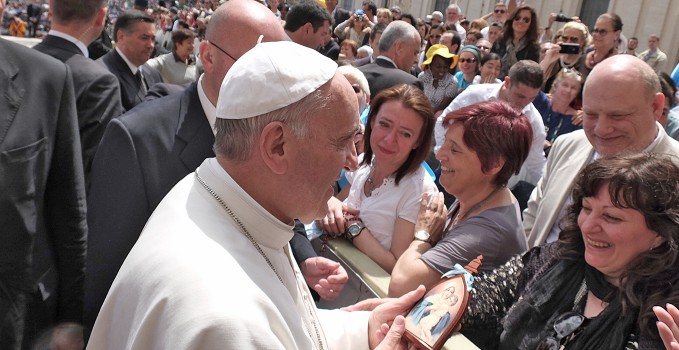 TIERRAS DE AMERICA/ALETEIA.org. I met up with Buenos Aires’ Archbishop, Cardinal Jorge Mario Bergoglio, in Fall 2005 in Rome. When I phoned to ask him for an interview, he responded with affability, but also firmly, “I would prefer to avoid an interview, although we also can meet to talk.”

We set a date to meet at a clergy boarding house near the Vatican, where the Cardinal would later be meeting with another bishop. When I arrived, I had my first surprise– although I was fifteen minutes early, the Cardinal was already waiting for me in the hallway, reading a small book that appeared to be the breviary.

The firm handshake and greeting were warm and cordial. His immediate and transparent smile transmitted confidence and enthusiasm, and for a moment, I thought he might grant me that interview.

On the morning of December 25, 2014, shortly after his ending his Urbi et Orbi message as he was leaving the Basilica’s Loggia balcony, where he had prayed for peace in the world, once again I received the same warm and cordial greeting, but this time it was from Pope Francis.

The man does not change

That morning, I could not help recalling 2005, although it had been under different circumstances, and yet I experienced an unusual feeling that gave me pause: the mission to which he had been called changed, but the man had not changed. In addition, I remembered something a Jewish friend – who deeply loves Pope Francis –says often, “He is a great Pope and a great priest because he is a great man.”

At our almost half-hour meeting in 2005, I remember– as we were trying to bring our two chairs together and after just sitting down, the Cardinal again gently made it clear – that he did not want an interview.

Then came the second surprise because then he began to ask me many questions (that seldom other interviewees had ever asked me during my many years of service to the Hispanic American Program on Vatican Radio).

He was very interested in the person before him, and he asked me, for example, which Latin American country was I from? Why was I in Rome? If I was married and how many children did I have? Were my parents still living? What was my work like?

He listened attentively and with interest to my somewhat brief responses, and he even asked me how old I was when my parents died and what specifically did my job consist of.

It was obvious that my responses did not hang in the air. He was also interested in my health, joking because I was very thin, and he then added: “But you know that many thin people are fake skinny ones. I was also a fake skinny one for a long time,” he ended smiling.

Suddenly, looking at me with great seriousness, he asked, “But what questions did you want to ask me?” I remember that I answered him quickly, “Many questions, Your Eminence, but especially one… I would like for you to explain one of your expressions, which has always fascinated me: ‘The pastor should have the odor of his sheep!’”

His response was immediate, “It is something that I often say to my priests because they should be aware at every moment that the Lord has given them the mission to care and to guide the flock. The sheep trust and allow being guided only if they recognize in their pastor what they seek and what they need.”

On March 13, 2013, in a short commentary for Vatican Radio – two hours after the election of Pope Francis – with a colleague who was interviewing me, I referred to this anecdote and gave the explanation of his thought which later, as is well known, he himself has repeated and developed on various occasions.

When I spoke to Cardinal Bergoglio, almost ten years ago – I was certain that he was speaking to me, an unknown person without any importance or title – he did it attentively and with attentiveness. His lively and penetrating look accompanied his expressively strong hand movements.

While listening to him, I had a very clear impression, and I told myself: “He is speaking to me, and he wants me to listen to him, because he is convinced of the importance of what he is saying.”

I was very impressed because rarely had a person I was speaking to made every possible effort to make himself heard; a person who, while looking you straight in the eye, completely dedicates his time to you, even if it was a brief, with the aim of truly communicating, seeking in the person with whom they are conversing understanding and response…

After referring to what he called “idolatries of our times,” a phrase he spoke that seemed very meaningful: “There is a great need to renew the faith.” When I asked him the meaning of that expression, his response was insistent, “To return to Jesus, as St. Paul says, ‘remember Christ.’ He is the one who rules over all things and He does it from the Cross. If we take the Cross out, nothing has meaning.”

As he said these words with intensity, he took a small wooden cross out of his pocket and placing it in my hands, he added: “It is from the Holy Land.”