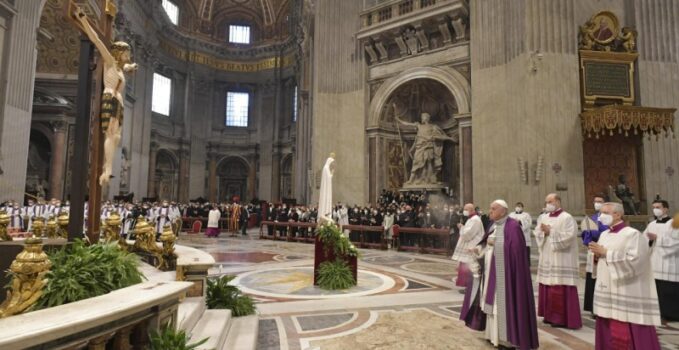 Posted On 2022-04-04 In Covenant solidarity with Francis, Francis - Initiatives and Gestures

At St. Peter’s Basilica in Rome, more than 3,000 people watched the ceremony, while another 2,000 gathered in St. Peter’s Square on March 25, the Feast of the Incarnation of the Lord, to support Pope Francis’ initiative. Another gesture by the Pope to end the war. Another strong appeal from Francis to end the conflict “that makes everyone suffer.” All over the world, the faithful gathered in different ways for a global prayer. Also in the Original Shrine in Schoenstatt, as in many home shrines in line with the initiative of the Family Federation of Spain. Synergy of Faith. —

On the eve of March 25th, I saw them physically for the first time. How old must this rickety car in front of me be, packed with at least 5 people and a lot of luggage? A Lada, where did it come from these days? Dear God! I see the Ukrainian flag on the license plate. This is not a gesture of solidarity with these suffering people. There in front of me are refugees from Ukraine. I would like to get out of the car, stop them, embrace them… I can embrace them only with my prayer. And that very strongly.

“In union with the bishops and the faithful of the world, I would like to solemnly present all that we are experiencing to the Immaculate Heart of Mary; to renew the consecration of the Church and of all humanity to her, and to consecrate to her in a special way the Ukrainian and Russian people, who venerate her as Mother with filial affection,” Francis said. 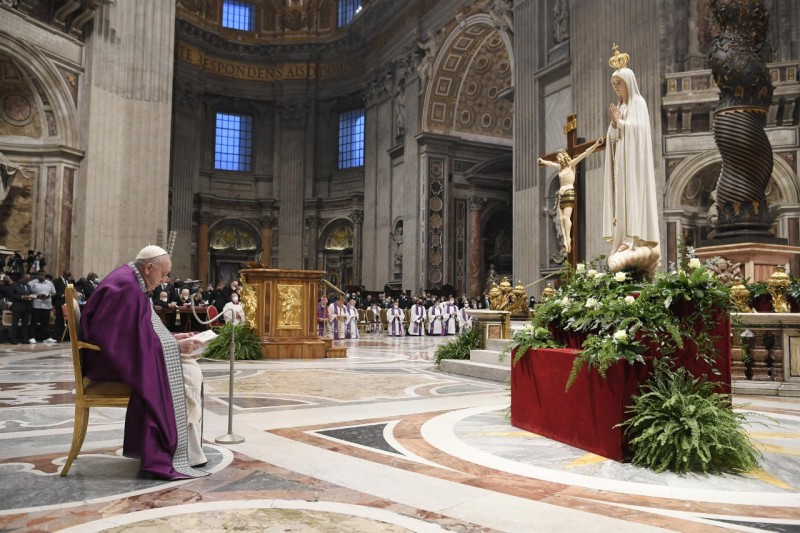 United in prayer for peace from the Original Shrine

Pedro M. Dillinger, from the Institute of the Schoenstatt Brothers of Mary, who is presently in Schoenstatt, sent some photos of the celebration in the Original Shrine with live transmission from Rome. There is a Ukrainian flag on the altar of the Original Shrine – while in House Marienau (Priests’ Federation) and in the House of the Family the first Ukrainian refugees have already been welcomed. Rooms for refugees are also being prepared in the Pilgrims’ House and in House Marienland, following the example of the Schoenstatt Fathers in Poland, who already received several families from Ukraine a few weeks ago. 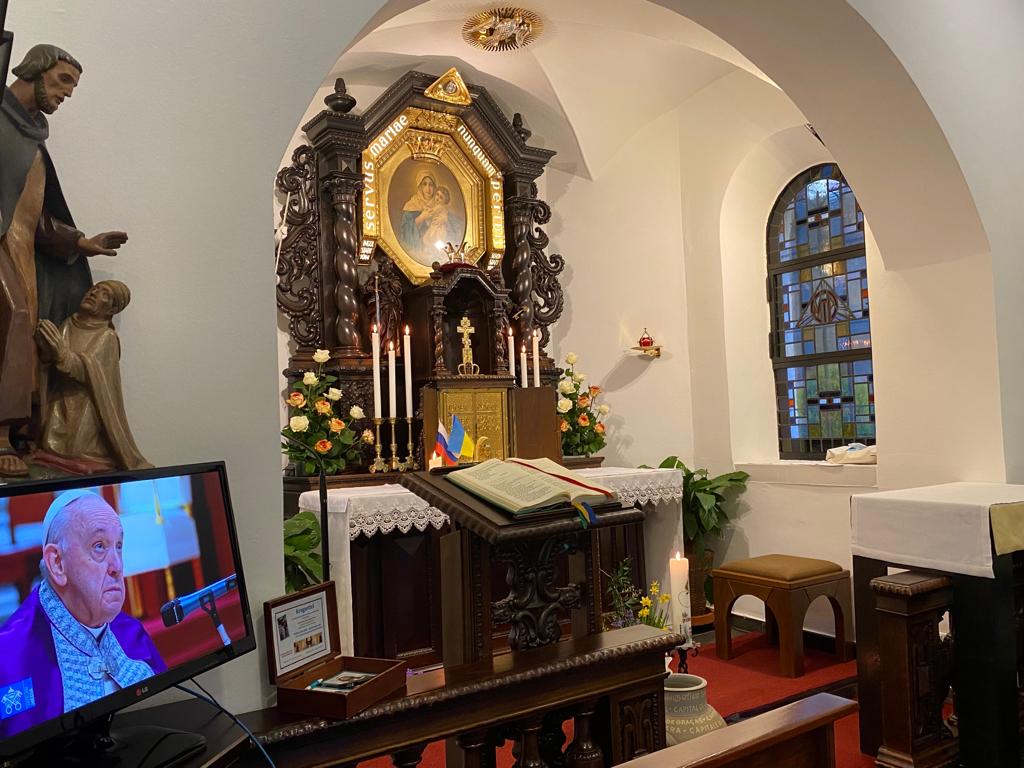 Gestures of solidarity and prayer

Bishops throughout the world participated in the consecration in the cathedrals, and it was the same in many communities.

In some German cities, churches were illuminated in the colors of Ukraine.

In the Shrine in La Plata and at the wayside shrine in City Bell, Argentina, many Schoenstatters gathered to pray the rosary for peace. The Schoenstatt Family in Costa Rica did the same at the Movement House in San José/East. 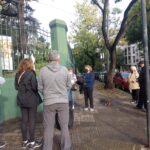 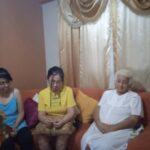 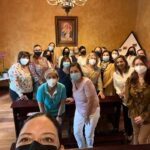 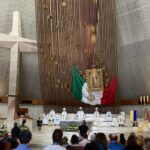 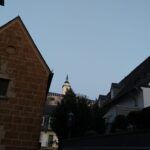 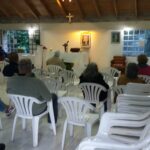 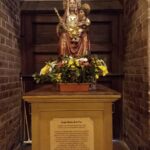 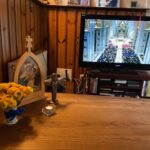 Flowers in the colors of Ukraine 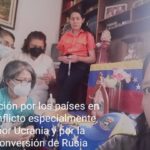 Inspired by the initiative of the Family Federation of Spain to unite in groups that already exchange via chat anyway, and to take turns praying a rosary for peace from the Home Shrine, several members of the schoenstatt.org team have been participating in this prayer of gentle violence for days – from Madrid, Vienna, San José, Siegburg, Monterrey, Lisbon… Several Schoenstatters from Venezuela have also joined this initiative.

With a bouquet of flowers in the colors of Ukraine in her home shrine, a collaborator of schoenstatt.org writes: “United in prayer for peace, today I offer my rosary for Ukraine, its victims, and for a change in Putin’s heart.” 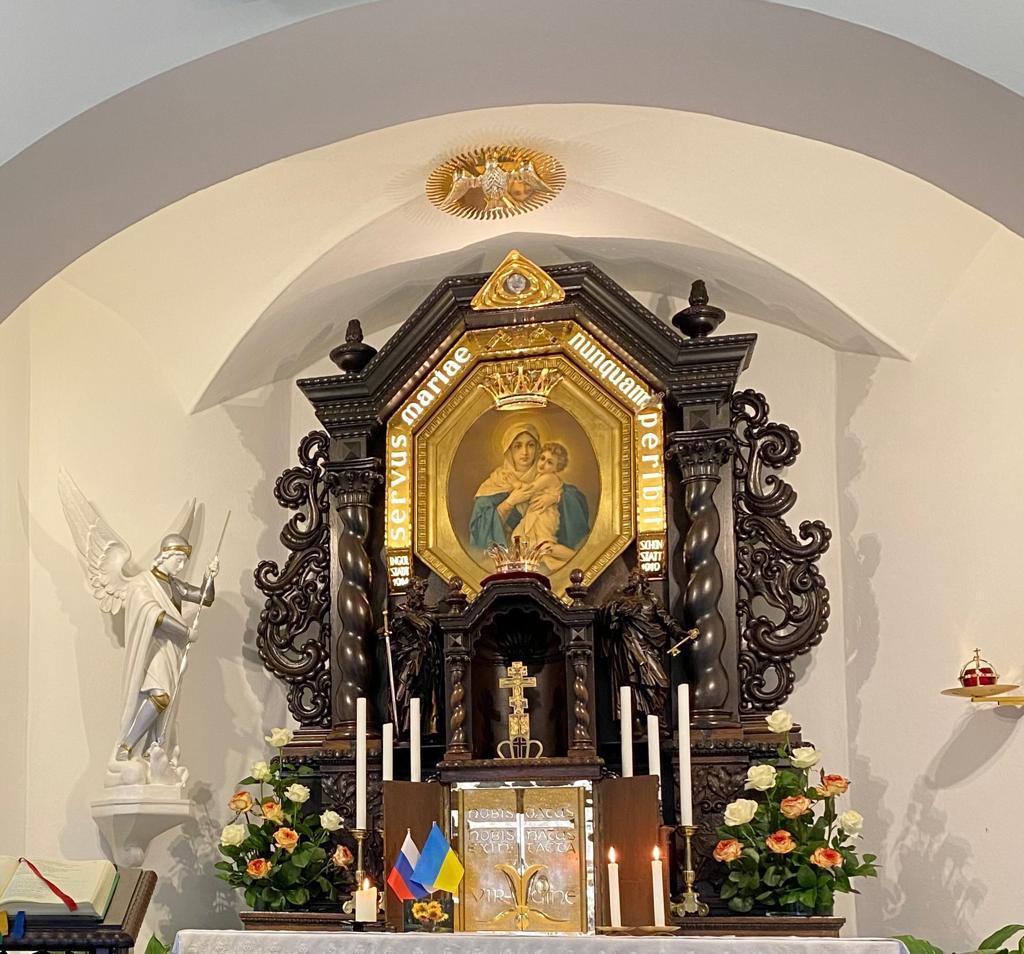