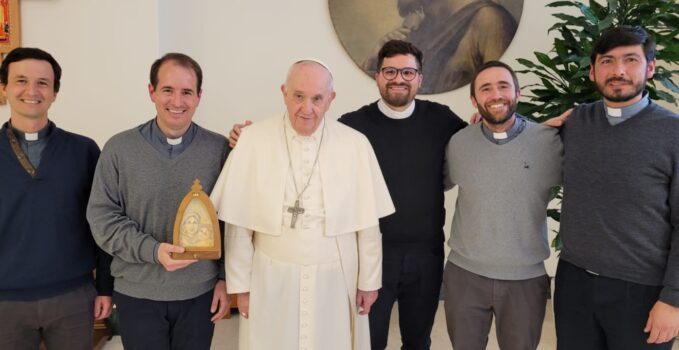 Dear Father Ailton, a few weeks ago, during your visit to Rome and the Vatican, you and four other Schoenstatt Fathers from the Dilectio Patris Vivens ex Sion (Living Love of the Father from Sion) had the opportunity to personally meet Pope Francis. For sure it was an unforgettable and very special moment in your priestly life and one that you will always carry in your memory and heart. Therefore, we would like to know how this conversation with the Holy Father went. —

How was this meeting possible? How did you reach the Pope?

Fr. Ailton: The meeting took place on April 8 in Casa Santa Marta. Before that, we had sent two e-mails to the Pope through a Uruguayan priest who is the Holy Father’s personal secretary. To my surprise, I received a note in reply, written in Francis’ own handwriting, confirming our meeting. Schoenstatt Fathers Felipe Perez and Gonzalo Illanes from Chile, Matias Clavijo from Argentina, Gonçalo Cravo from Portugal, and myself from Brazil were present.

It was a gift from God through the generosity and humility of the Holy Father. That same week, on Wednesday, Father Alexandre Awi managed to get us in the front row to greet the Pope at the general audience.

When he greeted us, we said, “Holy Father, we are the Schoenstatt Fathers…” And he replied, “But you come on Friday too, right?” We answered: “Of course.”

And the Holy Father apologized saying: “I’m sorry, it’s just that your first e-mail got lost in an e-mail with other documents – and as soon as I saw the second e-mail, I had time to respond. So, I greet you now and see you again on Friday.”

How long did this meeting last? Did it exceed your expectations?

Father Ailton: We were with the Holy Father for a little more than 50 minutes.

It exceeded our expectations in many ways. Firstly, because we felt very comfortable, we laughed a lot with the naturalness and humor of Francis, but we also had moments of wise advice and requests from the Holy Father for us as young priests.

One of the most beautiful moments was when the Pope placed on our course`s Pilgrim Mother, a cross similar to the one he wears as Bishop of Rome.

What phrases from Pope Francis touched you the most?

Fr. Ailton: Personally, the phrases that touched me from the Holy Father were:

“Be able to forgive yourselves, as you forgive others.”

“Please brothers, fight especially against the angelic character sins: pride, arrogance, conceit and especially, friends, against the culture of gossip… Gossip attacks the fifth commandment – thou shalt not kill – because it kills the other person in life.”

Those were some of the phrases said by the Holy Father that struck us, there are some others directed more to the context of our course and priestly service.

From Men`s Youth São Bernardo to the world. At some point in your life, did you imagine that you would live such a remarkable experience?

Father Ailton: Actually, I never thought I would live something like this. I am sure that it was a grace from God in our course. Personally, I think it was through the intercession of Padre Pio, because the answer to the second e-mail we received the same week it was sent.

Thinking about the mission of Schoenstatt for the Church, what impulse or motivation do you take from this encounter with the Pope?

Fr. Ailton: The impulse that I take away from seeing the Pope is to witness a Holy Father who is very human, joyful, humble and with gestures of solidarity with us. He has given us books and rosaries in our languages. In other words, Francis has touched me by teaching me that the depth of the gospel is given in simplicity …

Personally, in terms of Schoenstatt, I take a word from the Holy Father from this meeting: “SERVICE”, work on whatever comes, be attentive and give answers to the new realities that reach us. I translate this by being a movement that goes out, to encounter the people.

After this time of learning and formation in Europe, what are your plans and projects upon your return to Brazil? Tell us about a dream you would like to fulfill.

Fr. Ailton: My dream is to continue working as a Schoenstatt Father and to serve, letting God lead me through what my brothers and superiors in the community think about where I can give my small contribution – with this question, I remembered that this was also one of the topics that we spoke about with the Holy Father.

Pastorally, in these almost six years of priesthood, I have always been happy in the work that God has entrusted me to do as a priest. 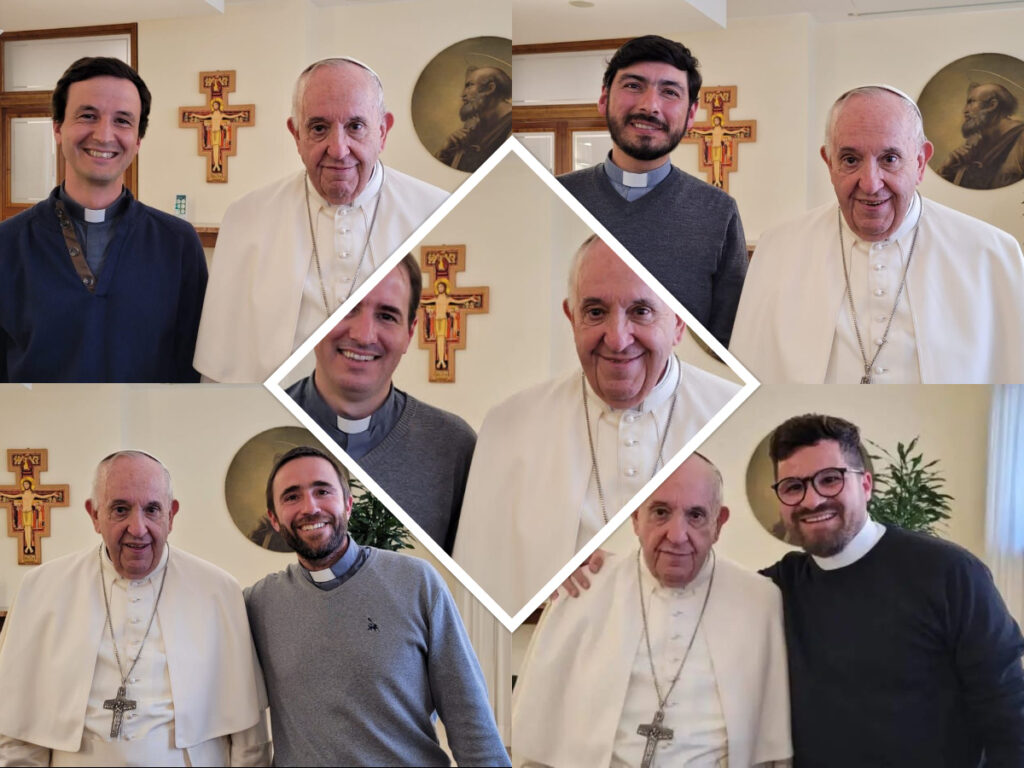