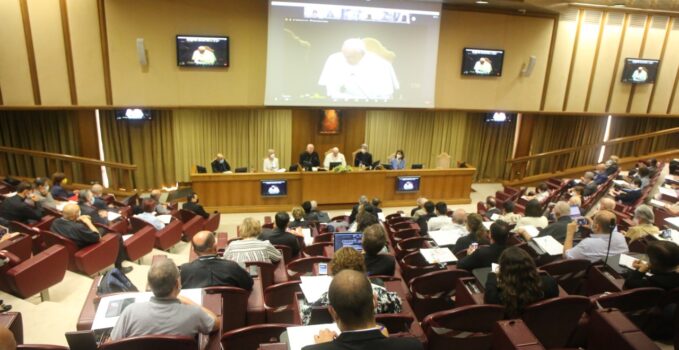 On September 16, 2021, the Dicastery for Laity, Family, and Life summoned the moderators, presidents, and international leaders of all ecclesial movements, new communities, and associations recognized or erected by the Holy See to reflect on the theme “The responsibility of governance in lay aggregations. An ecclesial service”. —

The core issue of the day was that of closely examining the themes included in the General Decree “The International Associations of the Faithful“, with the aim of reflecting together on the exercise of authority in lay aggregations.

The Symposium, partially followed via videoconference because of the pandemic, took place in the New Synod Hall, with the participation of about 300 people who, in their various roles, share governance responsibilities in lay aggregations, as well as some of the Dicastery’s members and consultants.

Pope Francis: Stop “Desire of Power” and “Assume to be the sole interpreters of the charism”

With great surprise, at 10:00 a.m. the Holy Father arrived in the Hall, addressing a heartfelt message to all those present and to those connected by videoconference. The Pope first of all expressed his gratitude to the institutions represented in the hall, for the evangelical witness they bear in the different circumstances of ordinary life.

Then, in his reflections on the theme of government as service, the Holy Father pointed out to the participants two obstacles that can arise when governing: “the desire for power“, manifested in the “desire to be everywhere”, which undermines all forms of subsidiarity and makes those who govern believe they can make decisions regarding all aspects of the life of the association and the people who are part of it; and “disloyalty,” typical of those who assume that they are the sole interpreters of the charism and, under the pretext of wanting to serve the Lord, serve only themselves. Therefore, continued the Holy Father, in order to carry out a role in governance, we must learn to consider ourselves as “unprofitable servants” (Lk 17:10), in order to remain humble and docile to God’s will, just as Jesus showed us when he washed the disciples’ feet.

When the Holy Father left the Hall, the Prefect of the Dicastery, Card. Farrell opened the session by immediately identifying “service” as the fundamental and indispensable aspect of the exercise of governance in ecclesial realities: service to the person, to the charism and to the mission of the Church. Moreover, Farrell stressed, such service can only be grasped in its ecclesial dimension. In this regard, he commented on the relationship between association governance and ecclesiastical authority, referring to the intrinsic and providential relationship that exists between charismatic and hierarchical gifts.

Then Msgr. Matteo Visioli, Undersecretary of the Congregation for the Doctrine of the Faith, took the floor. He focused his talk on the theological-ecclesiological foundation of the concept of authority in the Church, and highlighted its relational paradigm. He went on to formulate some of the consequences of exercising the Church’s authority, in particular of its risks.

In the afternoon, Ms. Linda Ghisoni, Undersecretary for the Laity, structured her presentation in three parts: after an overview of the ecclesial realities affected by the Decree, the focal point of the meeting, she examined the transition from the charism of the founder to the collective charism. In this regard, the distinction made by Ms. Ghisoni between the charisms or personal gifts of the founder and the essential nucleus of the founding charism, which is destined to become collective and of which no one retains neither the imprint nor the ownership, was fundamental. In light of this distinction, it is clear that any personalization involves an attempt to appropriate a gift that is, from its origin, intended to be collective. Finally, in the last part of the speech, the Undersecretary of the Dicastery gave some practical indications on how to implement the mandates of government and the level of representativeness required by the General Decree.

Next, Eliana and Paolo Maino, founders of the Via Pacis Community and Don Stefano Aragno, Vice President of the Cenacolo Community, gave their testimonies.

The first to take the floor was Paolo Maino, who, having headed the Community he founded with his wife and Don Domenico Pincelli for 40 years, explained how he reached the decision to resign from the Presidency, a choice certainly not common for a young founder. And yet, reflecting in the presence of God, Paolo, together with Eliana, clearly saw that the Lord was asking something else of him: “leaving was necessary for the future of the Community”. Today Paolo and Eliana ask themselves if this decision “was perhaps a turning point which God allowed so as to prompt an improvement of the Community itself”.

Then came Don Aragno’s intervention that was particularly moving. He described the experience of “leaving” from a completely different point of view, since today it is he who has substituted its foundress, Mother Elvira, in the leadership of the Cenacolo Community. Don Aragno told us how the “step down” taken by Mother Elvira generated a greater awareness of the true protagonist of the history of the Cenacolo Community: the Holy Spirit, the source of the charism and the only founder. This awareness, said Don Aragno, matured precisely from that wise “detachment” from the personality of the foundress, which made all the members, especially those who belonged since the very beginning, more aware of the gift of grace received from God through her, and promoted a renewed and more authentic “yes” to the work to which the Lord called them.

The luncheon, served in the atrium of Paul VI Hall, was also a valuable opportunity for sharing, meeting and promoting dialog between the leaders of the associations and movements and the officials and superiors of the Dicastery.

The rest of the day was dedicated to questions and interventions from the participants.

To conclude the day, Card. Farrell revisited the highlights of the day’s proceedings underlining the need for formation for all, and at all levels, in governance as well as service. Without a doubt, it was a very intense and enriching day, starting from the Holy Father’s words and thanks to an open sharing of the challenges and expectations common to all movements and associations in serving the Church.

Documentation
Address of the Holy Father Francis to participants in the Meeting with moderators, presidents, and international leaders of all ecclesial movements, new communities, and associations [EN]