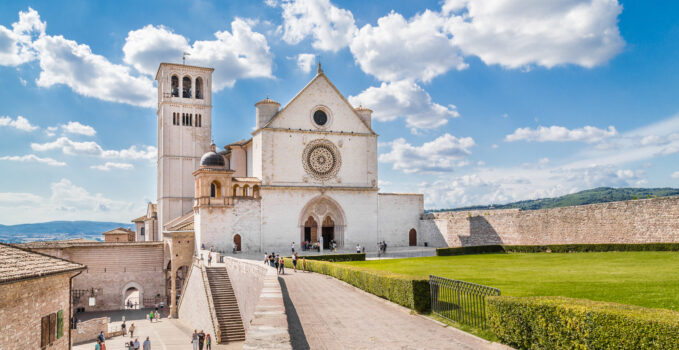 Assisi is preparing to welcome more than 2000 economists and entrepreneurs under 35 years of age from all over the world to participate in the “Economy of Francesco” event from March 26-28, requested by Pope Francis. The City of St. Francis will be organized for this purpose in 12 “villages” where the great questions of the economy of today and tomorrow will be debated: Work and Care; Management and Gift; Finance and Humanity; Agriculture and Justice; Energy and Poverty; Profit and Vocation; Politics for Happiness; CO2 of Inequality; Economy and Peace; Economy as Women; Businesses in Transition; Life and Lifestyle. —

The horizon within which the formulation of the villages can be read is given by the words of the Bishop of Assisi, Domenico Sorrentino: “The Conference has a relationship with St. Francis, with his life experience and his decisions, which also have a value in the economy. It was he who chose between an economy of selfishness and an economy of gift. His undressing before the eyes of the Father and the Bishop of Assisi is an inspiring icon for the March event and is the reason why the Pope wanted it in Assisi. We hope that the spiritual climate of this city will characterize the entire course of the meeting”.

The participants of “Economy of Francesco” are young researchers, students, postgraduates; entrepreneurs and leaders; social innovators, promoters of activities and local and international organizations; they deal with the environment, poverty, inequalities, new technologies, inclusive finance, sustainable development: they are interested in people.

The scientific director of the event, Prof. Luigino Bruni, explains the concept of the event: “In Assisi the protagonists will be the young people who will tell their ideas about the world, because they are already changing it, in terms of ecology, economy, development, poverty. The “Economy of Francis” will be a container of ideas and practices where young people will meet at “slow speed” and will have the opportunity to reflect and ask themselves, following in the footsteps of Saint Francis, what it means to build a new economy on a human scale and for man. Three days that will end with the signing of a pact between the young economists and Pope Francis, who called them to Assisi to listen carefully to their cry of alarm, their dreams”.

“Francis of Assisi was a young merchant, a party planner and a dreamer … like many others today. And yet we look at him with a healthy dose of envy. From his spiritual experience – explained Father Mauro Gambetti, the Custos of the Monastery – a movement was born that contributed decisively to the birth of the modern market. Humanity, civilization and well-being grew rapidly after him. Why not? This seems to be the provocation of Pope Francis to the young people. The challenge is enormous, because it is not won thanks to the competence, genius or imitation of a person – not even St. Francis – but is as great as the trust placed in young people. Listening to the deepest desires of the heart and the ability to choose what is important – paradoxically not for money – will open the way to a new economy. We believe in it”.

“The city of our Saint is the natural place to inspire an event aimed at making a pact between young economists and entrepreneurs to give the economy of tomorrow a soul based on brotherhood and justice. The “invitation” came directly from the Pope, who, referring to the Saint of Assisi, invites us to appreciate his example par excellence in the care of the last of the earth, in the attention to the weak and poor and in the need for a holistic ecology. The city of Assisi will be ready for the March event, and it will be ready with all its symbolic and moral strength and with coherence with the “Franciscan” message of its entire community. The economy of Francis must speak to everyone, and everyone must feel involved and participate in an extraordinary and historic event. Because the role of Assisi, recognised by the Pope with this meeting, is that of a “city message” that guides a change that finally leads from words to deeds,” said the Mayor of Assisi, Stefania Proietti.

The event is organized by the Diocese of Assisi, the Seraphic Institute, the Municipality of Assisi and the Economy in Community (Focolare Movement) in collaboration with the Franciscan Families.

Here are some more data that Father Enzo Fortunato, who is in charge of public relations, has compiled:

The youngest participants are 12 years old and come from Slovakia and Thailand.

The event The Economy of Francesco will begin on Thursday, March 26th. The Nobel Prize winners Amartya Sen and Muhammad Yunus will officially open the three-day event with young economists and entrepreneurs. In addition to the speakers already known (Kate Raworth, Jeffrey Sachs, Vandana Shiva, Stefano Zamagni, Bruno Frey, Anna Meloto, Carlo Petrini), the economist Juan Camilo Cardenas and the philosophers Jennifer Nedelsky, Cécile Renouard and Consuelo Corradi will be present. There will also be experts in sustainable development, artificial intelligence and internationally renowned entrepreneurs, including John Frank of Microsoft and the entrepreneur Brunello Cucinelli. A variety of plenary and parallel sessions will allow young people to discuss with all speakers.

The meeting from March 26 to the 28th will be preceded by a preliminary event from March 24th through the 25th during which 500 young economists and entrepreneurs – representing different geographical regions, cultures and research and business areas – will work on preparing the main event.

On the final day, the young people will “meet” Pope Francis to make a solemn pact with him, in which they commit themselves to transform the present economy and give a soul to the economy of tomorrow.

Throughout the conference there will be the opportunity for personal discussions with economists, entrepreneurs, philosophers, bankers, brothers, sociologists, managers, innovators and nuns. A permanent start-up room for idea-project-networking is available. Personal visits to Franciscan places until late in the evening and early in the morning.

Valentina, 28 years old, researcher at Oxford University, studies behavioural economics and development economics and writes: “I felt that Pope Francis’ invitation was a call, an invitation to ‘face up to the matter’. My vocation is this: to study, to think. I have the privilege of being able to do this. I believe that this is an historic moment in which we must be present. Francis calls young people, he seeks their enthusiasm, their passion, their thoughts. I want to listen to the experiences of others, learn from them and have the time to pause and reflect on the future of our ‘common house’ by putting my skills as an economist to use in the service of the community. I would like to participate in an event where questions are more important than answers”.

Steve from Cameroon, 27 years old, a small business leader, says: “To participate in the economy of Francesco is to make a commitment to build another economy. I will be in Assisi to have an experience and then share it with the other young people of my country, Cameroon and all of Africa.

All information can be found on the website:   www.francescoeconomy.org