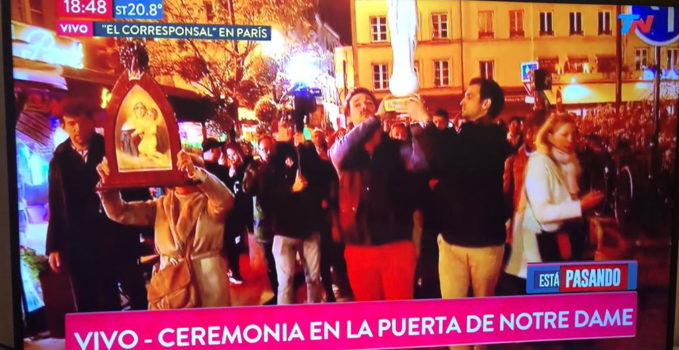 Notre Dame burns, hearts burn with love for the Church

Monday 15 April, Monday of Holy Week. Pictures and the news spread around the world when, about 7 p.m., flames from an infernal fire threatened one of the most emblematic cathedrals of France, Europe, and the whole Church: Notre Dame, Paris, was on fire. Not only did Catholics suffer shock and pain, but also other Christians, people of other religions and atheists united in a solidarity of sadness and helplessness as they witnessed the medieval treasure, the history of an entire people and a place full of centuries of prayers, being consumed by flames. Meanwhile, a video went viral, a video showing young people singing the Hail Mary.—

“Notre Dame has not fallen. The venerable Gothic structure endured the chaos of fire and guarded the altar area,”

“The rose window wasn’t destroyed, and the other stained glass windows still sing the victory of light over darkness.

Two-thirds of the wood is gone. The needle tower fell on the presbytery, but its ashes protected the altar, which remained intact in the middle of the central nave.

The organ is gone. We’ll have to redo it piece by piece.

Everything inside her is dark, full of smoke and ashes, but the candlesticks and the candles are intact, awaiting the Alleluia of the Resurrection.

In the background, imposing, the cross shines forth as a sign of life.

Notre Dame will be rebuilt. Probably some areas are still in danger because of their fragility after the disaster, but it will be rebuilt, washed, purified and, once again, consecrated as a holy temple of the Lord.

So will the Church.” 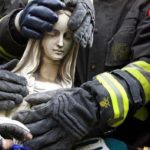 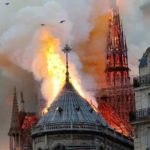 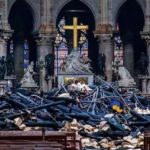 The photos of the Cathedral nave under the open sky, full of blackened debris, hurt. But in the midst of all the destruction the golden cross shines— the most beautiful image for this Holy Week, this Easter, at a time when the Church seems to be falling under the scandals of sexual abuse, power, and conscience.

Hours later, after the fire, inhabitants and tourists visiting Paris joined in prayer for Notre Dame in the streets of the French capital. In front of the monument devastated by fire, some knelt and joined hands in silent prayer. Others sang with their eyes fixed on an orange sky filled with dense smoke. Dozens who spontaneously came together sang the hymn— Ave Maria…

Many carried images of the Blessed Mother. In the front row, in a video transmitted by several agencies, a Schoenstatt Pilgrim MTA was visible. Schoenstatters from Paraguay, Germany, Venezuela, and Argentina saw it, were moved, and united in prayer. Notre Dame is more than walls. It is the heart of France, it is a sanctuary, and the flames that destroyed large areas lit up, rekindled the Marian soul of this European continent that so often seems to forget its roots. And the Pilgrim MTA, which arrived from a continent where Fr. Joseph Kentenich went to look for allies, was there.